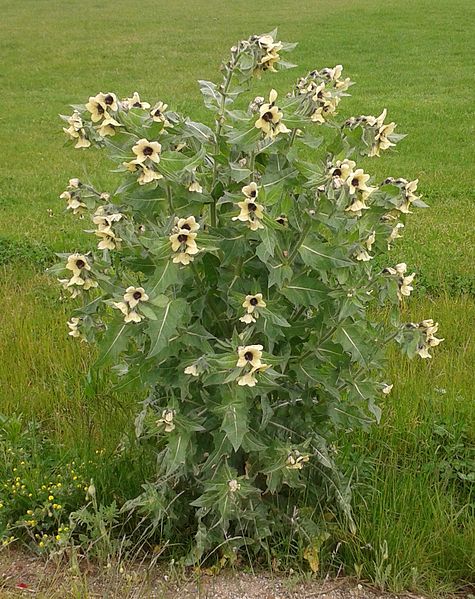 Henbane, Hyoscymus niger, belongs to the Solanales order of Plants and the Family Solonaceae { Nightshade family}It is also referred to by the alternative common names of 'stinking nightshade' and 'black henbane'.

The family Solanaceae includes some very poisonous plants such as the deadly nightshade and the woody nightshade { Bittersweet**} and this species., But the family also contains one of our most familiar vegetables the humble potato.

Although it is now globally distributed it is thought to have its origin in Eurasia. Although it is a poisonous species it has been traditionally used in herbal medicine since at least the time of the ancient Greeks. The plant must not be confused with the benign herb of the Goosefoot family with the common name of Fat hen.

Here we look at the species,its past and present medicinal uses along with notes and observations from past herbalists and other eminent writers. As always we commence with a description of the species under review.

Illustration of Henbane and its components. 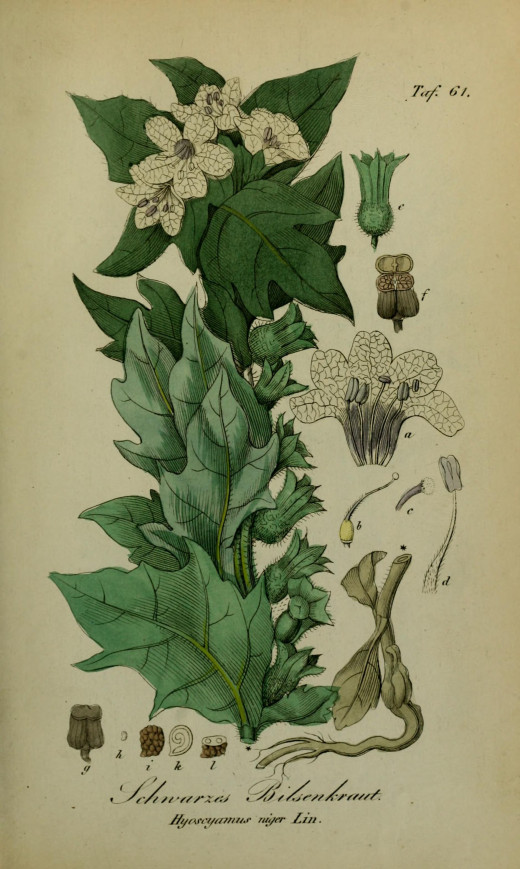 Mrs.Grieves 'modern Herbal' 1931,reliably conveys that Hyoscymus niger,the common Henbane is susceptible to considerable diversity of character causing varieties which by some have been considered as distinct species. The plant is sometimes annual and the stem almost unbranched, smaller and less downy than in the biennial form, the leaves shorter and less hairy and the flowers often yellow without any purple markings.This type flowers in July and August, The biennial form flowers from May until June.

The annual form is produced, it is thought, by the weaker and later developed seeds formed in the fruits at the end of the shoots and are considered less active than the typical species which is described below.

The root of the typical form is annual, thick, fusiform, wrinkled, somewhat branched, of a brown colour externally and whitish within. The stem which arises from the root is erect,cylindrical, branched,covered by clammy woolly hairs and attaining the height of one to two feet. {30-60 cm } The foliage is large,alternately arranged,amplexicaul,soft,woolly-lanceolate- ovate, acute,and irregularly lobed.

The flowers are nearly stalk-less and terminate the stem and branches in a long,leafy spike, all turned in one direction and somewhat drooping. The calyx{sepals etc} is tubular cut five times, veined and persistent. The corolla {petals etc} is funnel shaped divided into five obtuse lobes the tube nearly white, purplish at the orifice and the tints pale yellow or straw coloured,elegantly reticulated with brownish purple veins.

The five filaments are subulate,at the base and tipped with cordate purple anthers. The fruit capsule is ovate with a furrow,on each side.It is two celled, opening by a lid and firmly enclosed in the calyx. The seeds are numerous obovate, curved,brown and hard covered with minute depressions.

The plant occurs in waste places,especially on chalky soil near towns and villages. It is found in most parts of the civilized world. The generic name of Hyoscyamus derives from two Greek words which together indicate 'hogbean'. The fruit is said to be eaten with impunity by hogs. The English name of Henbane alludes to the plants fatal effects on poultry.

Close up of the flower. 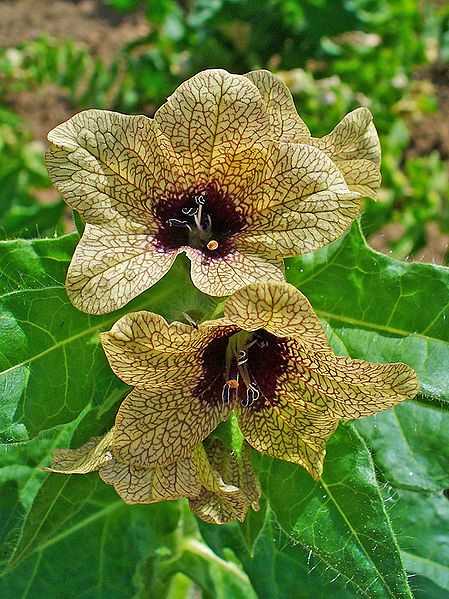 The lurid appearance and the heavy odour of this plant, together with the clamminess to the touch, seem to indicate its noxious qualities. Some say that the odour somewhat resembles that of the black currant, but stronger and more disagreeable. The herb is almost insipid to the taste, and the root sweetish. The leaves when burned are said to have an odour similar to that of tobacco.

Grieger and Hesse { Journal de Pharmacic xx page 992} discovered in this plant a substance, which they consider to be, the pure active principle and named it Hyoscyamine. It has the form of fine silky crystals, no odour,very acrid soluble in alcohol and ether, but only sparingly so in water. An empyreumatic oil of a very energetic nature was also obtained from it.

The Thompson's Dispensatory page 392 states " The virtues of Henbane are completely extracted by dilute alcohol. The watery infusion is of a pale yellow colour and insipid and has the narcotic odour of the plant. It is not altered by acids. The alkalies change it to a deep greenish yellow, which, on addition of an acid,disappears and a brownish flocculent precipitate is produced. Hence Henbane is thought to contain resin,mucus,extractive, a peculiar alkaline salt and gallic acid"

The whole plant appears to be poisonous to man. Sir J.Smith, however, and Professor Martyn asserted that they have swallowed the seeds without any inconvenience, while several other writers mention instances of the dangerous and sometimes fatal effects. Sir,Hans Sloane { Phil.Trans.vol xxxviii page 99} relays the following information of an instance of four children who ate the seeds,mistaking the capsules for filberts. the symptoms were great thirst,giddiness and dimness of sight.

It was thought that perhaps the oil contained in the seeds when taken in small quantities modifies the narcotic effects,and,thus the 'bane and antidote' may accompany each other.they certainly contain a poisonous principle since they yield by analysis more Hycoscyamine than the leaves. { Botanists questioned that, the immaturity of the seeds had any influence upon their properties? poppy seeds when unripe are considered to be hurtful but when quite mature they are bland and nutritive.}

The roots when eaten in mistake for those of the Parsnip have caused death.

Choquet { Journal.de Leroux et Corvisart Avril 1813 page 355} describes the effects of Henbane on two soldiers who ate the young shoots dressed with olive oil." They soon experienced a sensation as if the ground was rushing beneath them. They had a 'stupid'appearance and their limbs were swollen. Subsequently the eyes became haggard, the pupil excessively dilated,and the sight dull and faded. The pulse was small and intermittent, the breathing difficult, the jaw locked and the mouth distorted by the risus sardonicus. There was that union of delirium and coma termed Hyphomania. The limbs were cold and palsied, the arms agitated by convulsive movements, and to all these alarming symptoms was added carpologia."

" By the exhibition of emetics and purgative lavements, one of these men was soon relieved, the other continued delirious until the next day, but with copious doses of vinegar and strong purgatives he ultimately recovered."

Henbane was well known to the ancients as the writings of Dioscorides confirms { Mat.med.Lib.iv} but little use of it seems to have been made except as an occasional topic. Celsus { De Medicina lib v} recommends the leaves to be made into a Collyrium{ eye wash} with the yolk of an egg, and the seeds as an ingredient in pills for procuring sleep.

To Storck { Lib.de Stramonio Hyoscyano page 26} however, almost exclusively belongs the merit of discovering the true character of this plant. He administered the extract of the leaves in convulsions,epilepsy,palpatations of the heart and inveterate headaches,likewise in mania,melancholy and haemoptysis with the best effects.

In the hands of later practitioners,however, it did not prove equally successful in all those affections,but it was considered an excellent substitute for opium,it would seem,in those cases where the latter produces sickness and headache or costiveness {constipation} as it tended to relax the bowels.

One writer tells of the following narcotic effect of Henbane " in a full dose the delusions it presented to the mind in the first instance were most delightful that can be perceived. the scenes before the eyes were of a most enchanting description and every sense was ravished with the utmost excess of pleasure.These scenes however, were as transient as they were delightful. In a few hours the senses were as much annoyed as they had been gratified,and the utmost irritability of mind succeeded to the most delightful tranquillity"

Tournefort, { Pkants de Paris,tom i page 342}, recommended a decoction of Henbane to dissipate the milk coagulated in the female breast. Hufeland, recommended that the leaves and Marsh mallow flowers boiled in milk, with the addition of a few grains of acelate of lead as a topical application in scrofulus ophthalmia. An infusion of this plant was once used in eye drops which caused dilution of the pupil like belladonna {deadly nightshade}, and was regarded as having a milder action, so was sometimes employed prior to the operation for cataracts.

Many of these treatments prepared from Henbane had fell out of use by the middle of the 1800's. However, the leaves mixed with lard and simmered over a slow fire,was made into an ointment,and in the same manner with different resins into a plaster, to be applied to tumours and other painful affections.

The above information is for historical interest only and not meant in any way as a guide to self treatment.. Henbane is poisonous. 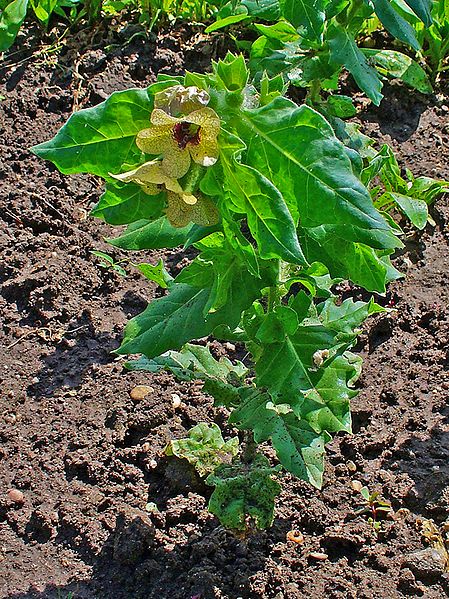 The flowering tops of hyoscymus niger contain hyoscyamine and hyoscine {Scopolamine} an anticholinergic and antispasmodic,which may relax the muscle of the digestive tract and it is also thought have a calming effect. It has been used by some herbalists in the form of Henbane Leaf Oil and applied directly to the skin for the treatment of scar tissue.

The side effects of this plant are very unpleasant,it causes a dry mouth and thirst,difficulty in swallowing and speech,warm,flushed skin,dilated pupils,blurred vision,vomiting,urinary retention,hallucinations,confusion and agitation. In severe cases there may hypertation,coma and convulsions. There are cases of fatalities especially to children.

The most famous case {UK} was of the use of Henbane by Dr.Crippen to kill his wife { known by the stage name of Belle Elmore},in 1910.

Henbane as previously mentioned is used in Homeopathic remedies but is prepared in such a way that the toxic properties are greatly diminished. It is used in the case of trembling,hiccups,spasmodic coughs, Muscle spasms and the confused mental state of the elderly. As far as the layman is concerned this plant should be left well alone and if used should only be in the form of commercially produced products under the guidance of a physician or other qualified health worker.

If you are trying this herb {commercial products} or any other herb for the first time just try a little at first to test your body tolerance.