Hemlock water dropwort. The most poisonous plant in Britain. 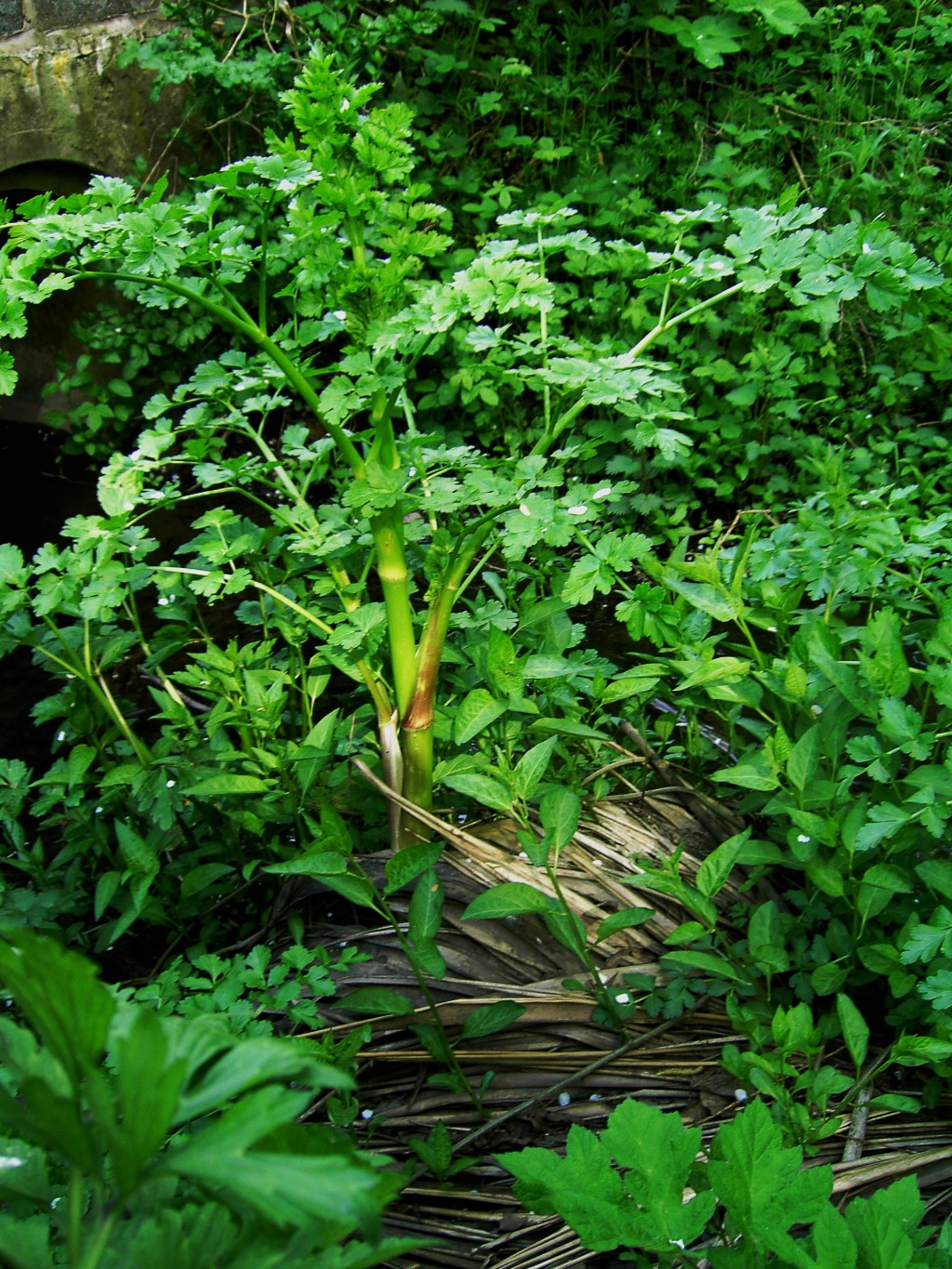 A common plant by watery places.

Walking around a local lake recently, a plant, that delights to grow in these situations was thriving in the margins. It has flowers in large white umbels, a sure sign, that the plant belongs to the same family as beneficial herbs such as hogweed, angelica, parsley, fennel, goutweed and celery. However, this plant is certainly not beneficial, in fact it has caused more poisonings and more fatalities than any other member of this family, or indeed, any other.An example to highlight this fact was given in the Emergency Medical Journal, which states---

"A group of eight young adults who were on holiday in Argyll collected what they thought was water parsnips from a small stream. The roots were cleaned and washed, chopped and added to a curry. Most of the group consumed the curry but most of them only consumed small amounts of the root which was easily identifiable in the curry. Partly because there was some doubt among them as regarding its nature and partly because some did not like the taste of it."

"Early the next morning ten hours after being ingested one of the group fell ill and had a witnessed seizure lasting about five minutes. he was taken to hospital feeling very ill. No connection was made at this point to the ingestion of the root the night before.

The main toxic constituent of the plant is Oenanthotoxin. The main concentration of this substance is found in the roots. It is at its highest during winter and spring. and ingestion of even small amounts can lead to fatalities. Doctors believed that the boiling process involved in making the curry helped to diminish a lot of the poison. They concluded by saying that the increasing interest in "natural food" accidental poisoning of this nature may become more frequent..

When the Irish lads were employed here in England to dig out the countries canal systems, fatalities occurred when the stems of were mistaken for those of wild celery. So as I have stressed in other hubs, correct identification of wild plants is essential, and any plant that can not be positively identified should never be eaten. This family of plants in particular has many similar looking species that are easily mistaken for each other. In most communities there will be someone with knowledge of these plants who is available to help in identifying the species.

{ Canals are  favoured location of this species.} 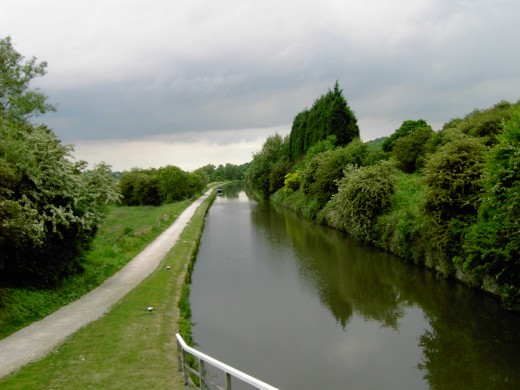 I will endeavour to describe the species in some detail with the help of photographs, so that the reader may be interested in referring too, should they be interested in using this family of plants. The majority of this family are harmless and beneficial to human health However, the more poisonous members include the Hemloch,Conium maculatum, Cowbane Cicta virosa and Fools parsley,Aethusa cynapium.
Hemlock water dropwort,  Oenanthe crocata -.--The roots are perennial and fleshy of a pale yellow colour when cleaned. The taste is sweetish then bitter, but not unpleasant taste, but has we have seen very poisonous. Because they grow in margins of ponds, lakes and ditches the roots are sometimes exposed by running water. This is tempting for cattle to eat and many cases of poisoning of cattle due to eating the root have been recorded.
The roots are tuberous and not unlike those of the garden Dahlia in form while those of the water parsnip are single and conical in outline.The stems of this tall plant { and indeed the foliage} are superficially similar to those of the celery. The stems are thick, erect and much branched above. They are tough and dark green.
The leaves are also superficially similar to the foliage of celeruy. However, the leaf segments can vary in form. The lower leaves have short stalks that have sheaths were the stalk meets the stem {typical of this family of plants}. The leaves are quite large and spreading in habit often reaching more than a foot {30cm}long. The whole leaf being triangular in outline. The leaflets are diamond or wedged shaped one to one and a half inches 2-2and a half cm} long with deeply irregular lobes, dark green above and paler and more shiny below. The upper leaves are much smaller, nearly stalk-less the segments narrow and acute.

The celery-like stems and foliage of Hemlock water dropwort 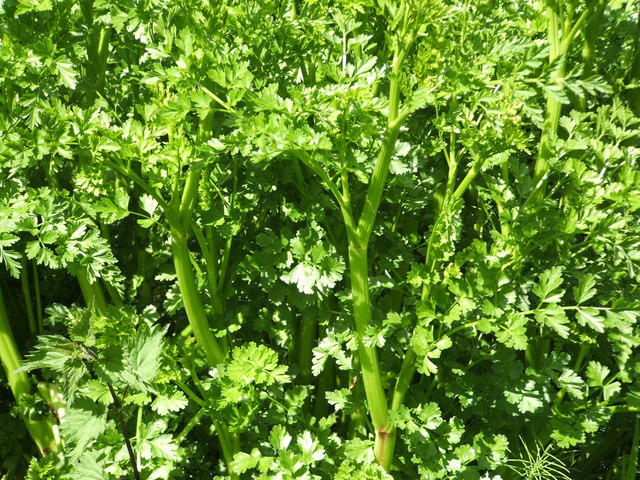 Leaf with the characteristic leaflets 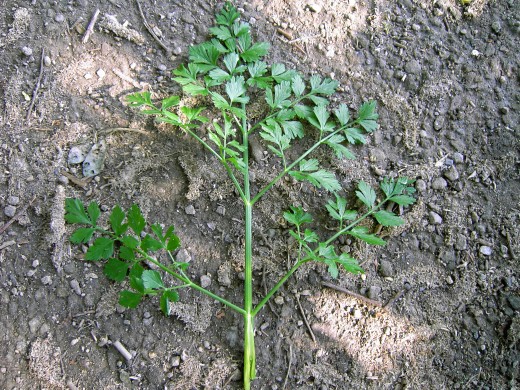 The flowers as previously mentioned are borne in large umbels. {think umbrella} with many strong spokes or rays. They flower from the beginning of June till the end of July. They are succeeded by a brown coloured globular fruit head4-6 mm long.

Flowers are white and formed in umbels. 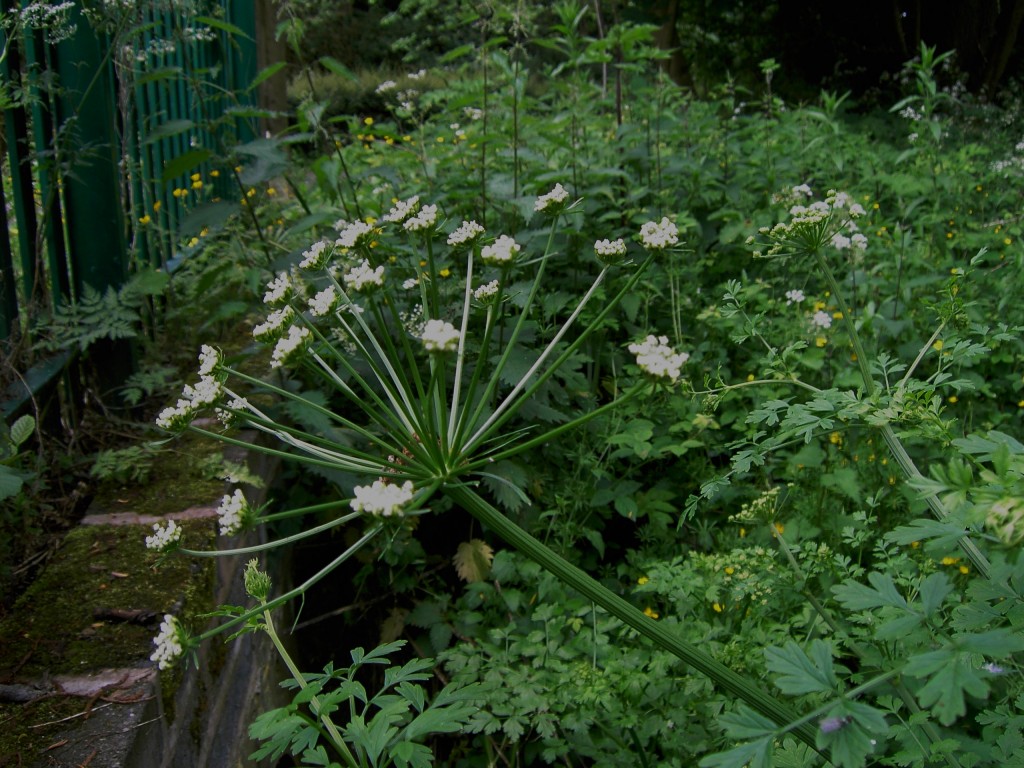 It is a plant to be admired for its form and for its stature {up to five feet tall} and its large umbels and attractive foliage. But most of all it is a plant that needs treating with the greatest respect and it is a plant better left well alone. Never use this species in medicinal purposes and NEVER EVER consume it. You have been warned.

Growing by a lake. 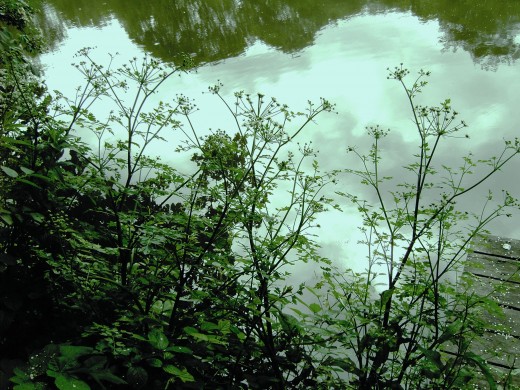 Flower umbel from above

The images on this page may be reused. However, the name of the relevant author must be attributed along with any accompanying license.
Thank you for visiting.