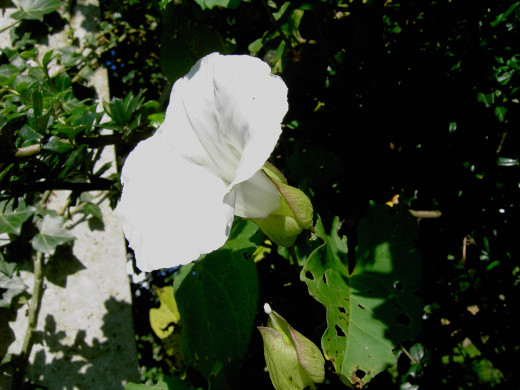 Here we review a species of wild flora that is a familiar sight in hedgerows and waste places. It also occurs { if you are unlucky} as a garden weed, which is difficult to eradicate and causes the gardener some consternation.

In the United States it is referred to as the hedge false bindweed and as also attained many country names such as Bear-bind, Devil's guts, Hedge bell, Old man's nightcap and Wild morning glory. It is classed there as an invasive and noxious plant.

Here in the UK, where they occur wild, adorning the hedgerow with their large trumpet like flowers they are , { in my opinion},a delightful adornment, which provide food for insects, particularly the long tongued moths.

They belong to the Order of plants known as the Solanales and belong to the Family Convolvulaceae and placed in the genus Calystegia {formerly Convolvulus.} They have been given the species name of sepium. Calystegia derives from the Greek words that mean 'beautiful covering' alluding to the large sepals,and the specific name sepium derives from the Latin sepes indicating a hedge.

In this review we will also look at its past medicinal uses. But as always an apt place to begin is with a description of the subject. 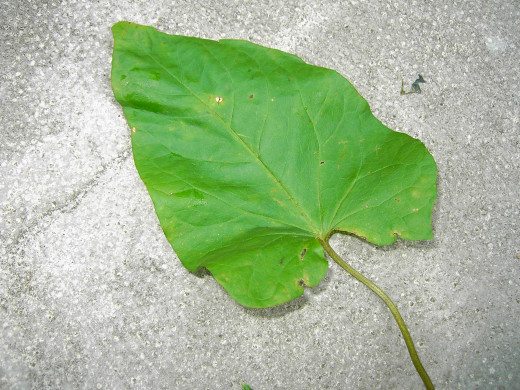 The consternation to gardeners { and farmers} is due to the very long and fragile root system { up to four meters long}, and the fact that its climbing twisting stems travel in great masses for several feet over plants and crops which to the gardener and the farmer are of much higher value.

The foliage of the hedge bindweed are large but relatively thin and delicate in texture. Like the foliage of all species in the genus they are singly arranged on the stem in an alternate manner. The leaves are arrow shaped.

From the axil of the leaf, springs the flower stalk, each stalk bearing a single blossom. The flowers are large and their snowy whiteness makes them very conspicuous. There are rare instances of flowers with a pink tinge being recorded.

The calyx is completely hidden by two large heart shaped bracts that enclose it, which led to it being placed in a different genus to our other common bindweed Convolvulus arvensis the field bindweed.

These large bractical envelopes conceal the true calyx which lies within. many of the old writers the plant is referred to as the Hedge-bell, a descriptive and appropriate name. It is often, too, referred to by these writers as the 'withwind' a name that was quite common until relatively recently, and refers to the lightness of these large graceful flowers as they wave on their long stems at every breeze.

The flowers open in the sunshine but tend to remain closed on dull days. They will even remain open on bright moonlit nights which gives the long tongued moths time a chance to feed. 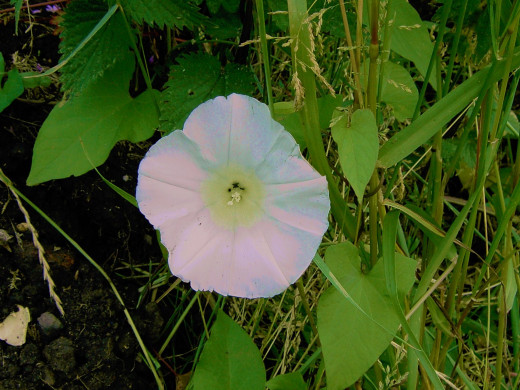 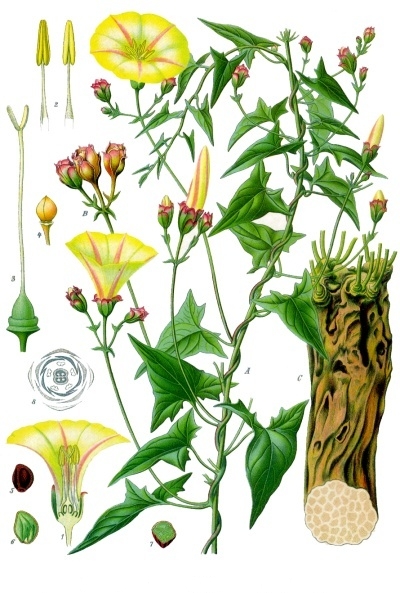 The hedge bindweed is an abundant species throughout England, Wales and Ireland , but tends to be somewhat local in Scotland.This order of plants are of peculiar beauty and interest. According to Lady Wilkinson in her book 'Weeds and Wildflowers' {1885}, in the valley of the Nile the common striped bindweed, Convolvulus arvensis, Field bindweed, grows everywhere in the fields, one name it bears is 'Olleyk' which alludes to its climbing or 'suspending' habit as the other name 'lubbayn' does to its milky juice.

" Summer showers, that fall above

Fainting blossoms, leave with them

Bloom the bitter storm have taken;

And this human love of ours,

To the world's poor failed flowers,

May be found as dear a boon

As God's blessed rain and sun

To restore their native hue,

And their native fragrance too "These lines which recall the way the flowers are protected by the bract like coverings until the storm has passed.

The beauty of these hedge bells are not the only virtues of this plant. herbalists of more archiac times claimed the root has properties similar to those of Convolvulus scammonia, and it was used as a substitute under the names of Montpellier, bourbon and Scammony.

Gerard the 16th century herbalist informed us that Galen recommended the leaves to be laid on hard swellings in order to disperse them. however, it must also be noted that Gerard was sceptical about the medicinal properties of any other plants in this tribe treating most of them with the utmost contempt, he states--" not fit for medicine and unprofitable weeds, and hurtefulle unto each thing that groweth next to them" His scathing contempt continues " they are among the herbs employed by runnagat physick-mongers, quacksalvers, old women's leeches, and abusers of physick, and deceivers of the People !"

Yet despite this torrent of ill feeling, Gerard admitted that the Calystegia known to him as Convolvulus soldaneela {soldanella was the then the speecific name} was used for scurvy in the county of Hampshire, and was good for flesh wounds and efficacious in dropsy, though from its acrid properties he says " It hurteth the stomachs of delicate persons"

The Field Convolvulus ,Convolvulus arvensis is also mentioned in herbals .The field Convolvulus is a low growing, creeping plant, with small and scantily distributed leaves which resemble in shape a horseshoe, from which the plant acquired its country titles of Sea-foal hoof and Sea-horse hoof. The Welsh name for the plant is Ebolgarn-y-mor which corresponds with the two latter names.

It occurs in sandy dunes or sand hills, and sandy shores, seldom being more than two to three inches high.It trails along the ground, and makes the desolate places where it grows, bright and cheerful with its pink blooms which are enhanced by the reddish yellow tint assumed by the bracts, stems and leaves when young.

In his book 'American Medicinal Plants' 1887, Millspaugh writes--" This too common plant of Europe has become naturalized In the north eastern United States where it flowers in June.It is said that it is a sure indicator that the soil is dry in all the localities that it chooses to inhabit. This plant has been much used like Jalap and Scammony, in 40-grain doses, of the jointed and vermiculate roots, as a diuretic and gentle laxative"

Millspaugh goes on to recommend the whole fresh flowering plant in a 'slightly wilted condition' is chopped and pounded to a pulp and weighed. Then two parts by weight of alcohol are taken, the pulp mixed thoroughly with one sixth part of it, and the rest of the alcohol added. After having stirred the whole well, it is poured into a well-stoppered bottle, and allowed to stand for eight days in a dark, cool place.

The tincture is separated from this mass by pressing and filtering has a deep reddish brown colour by transmitting light. Although it has, according to Millpaugh, the tincture had a somewhat nauseous odor , a slightly astringent, tea like taste and an acid reaction. he went on to conclude that the few symptoms so far determined in this drug, point to it as an irritant to the mucous membranes of the alimentary tract, and a stimulant to the neighboring secretory glands. Convolvulus causes eructations, flatulent cholic and liquid stools very similar to those following Jalap.

The above information is for an historical interest only and not intended as advise for home made herbal preparations. 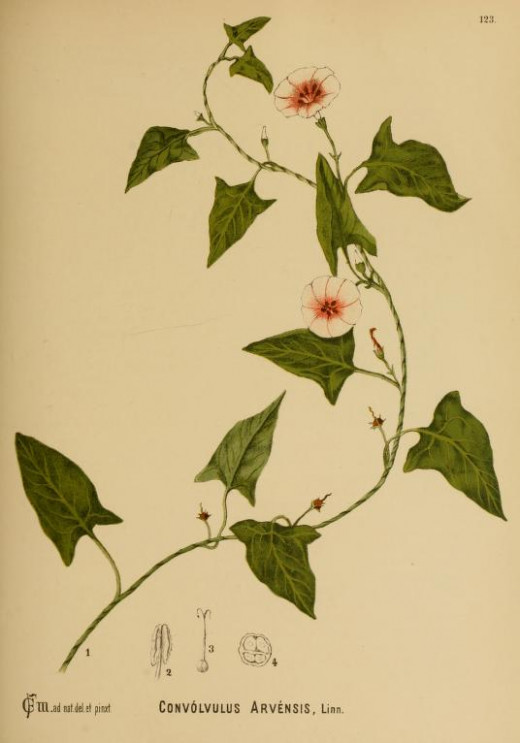