Hawkweed with their danedelion-like flowers belong to the genus Hieracium within the Order Asteraceae, {formerly the Compositae}.  They are closely related to the dandelion, chiccory, prickly lettuce and the sowthistle.

One of the most common hawkweeds in northern England and Scotland is Hieracium  lachenalii formerly Hieracium vvulgatum and it still can be found under that name in many wildflower books. This species is the common or yellow hawkweed, which is native to Europe and is also found now, as a commonweed, in Australia and parts of North America.

The flowers occur together at first and then become somewhat solitary on leafless stems. The stalks beneath the flowerheads are covered with simple gland-tipped hairs which are black and contain a milky substance.

What we think of as the flower are in fact flower heads made up  of many pale yellow  ray florets, and unlike the daisy they have no disc florets {which form the  yellow center of the daisy flower}. The flowerheads are 2-3 cm wide and occur between June and September generally.

The receptacle { the basel part of the flower to which the florets are attached} is flat and naked.The flowers are succeeded by the fruits which are dark brown achenes. When mature the seeds {achenes} are carried away on the wind by plumes which act like miniature parachutes.

The leaves are mostly basel and are lance-to oval shaped. They are similar to those of the Cat's-ear which has distinctive  lobed leaves. 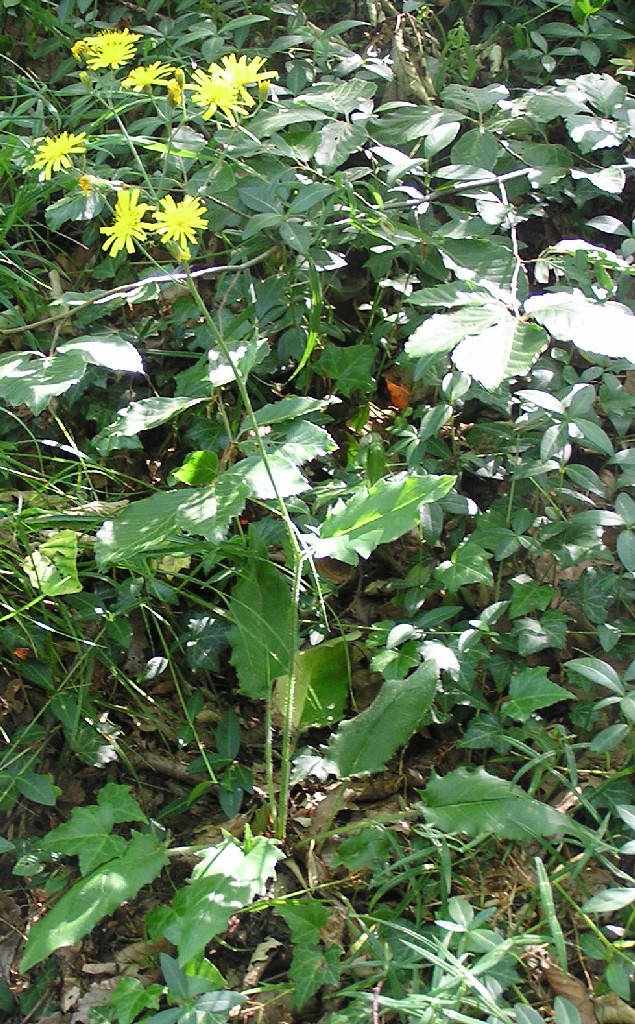 This species has similar flowers bur also leaves up the stem It is sometimes referred to as the Leafy hawk weed or wall hawkweed . It is found in a variety of habitat on walls and in woods. 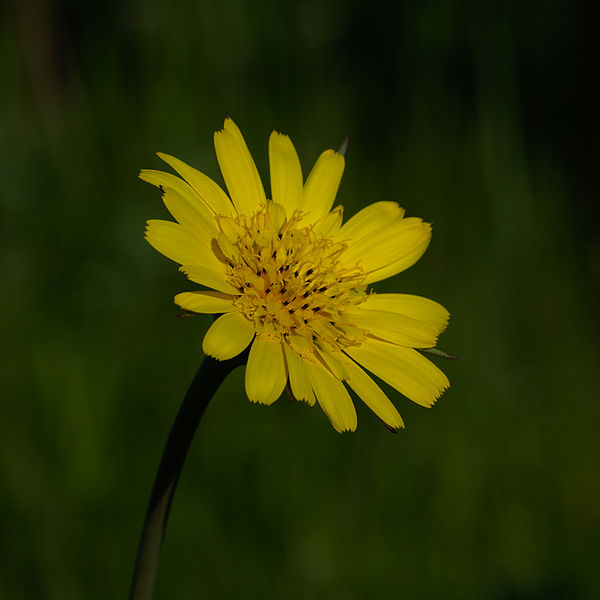 This species, in the UK, can be told from all other species of hawkweed by the way it produces scions {runners like those of the strawberry plant} . The leaves are formed in a basal rosette. The leaves are oblong with no teeth or lobes, they are densely hairy on the underside and a few long,bristly white hairs on the surface.

The lemon yellow flowerheads are made up of strap-shaped ray florets often striped red beneath and are produced on leafless stalks, the flowerheads are solitary  one point eight to two point five cm wide { about one inch}. They flower from June until September in dry grassland,dry pastures and roadsides and lawns with acid or chalky soils. They grow between 5 and 20 cm tall, {two to eight inches}.

They are similar to the plant Autumn Hawkbit which has lobed leaves and no runners.