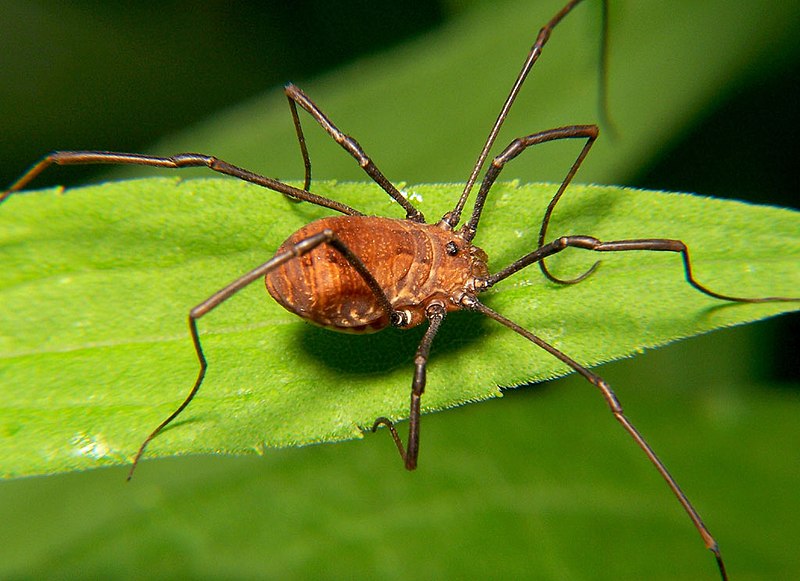 Harvestman, belong to the Opiliones an order of Arachnids commonly referred to as Harvestman, Harvester or in some countries as Daddy-Longlegs. In the UK the latter name is reserved for the Cranefly.  Harvestman and Spiders are both Arachnids, however, they are not closely related. There are at least 6000 species known worldwide, yet it is thought the true number of extant species may number over 10,000.

They have representatives on all continents of the world with the exception of Antarctica. They are often misidentified as Spiders . However, they can be easily distinguished from the long-legged Spiders by their fused body regions and the single pair of eyes in the middle of the cephalothorax. Spiders have a distinct abdomen separated from the cephlothorax by a constriction and they have three to four pairs of eyes, usually around the margins of the cephalothorax.

Spiders have a distinct abdomen as seen on this brown house spider.

Description of the Harvestman

The Harvestman is very distinctive with a rotund body  and very long legs it may seem like a spider but it is not one. Unlike spiders they have no silk glands and so cannot spin a web it does not have fangs and despite common misconceptions they do not produce venom.  The mouth is to round and they are incapable of biting through human skin. They do have eight legs. There are over 20 species in the UK most of them only active at night.

Some of these species have a projection on the top of the head that holds the pair of eyes this projection is known as the Ocularium. The second pair of legs is longer than the other three pairs. The longer legs act as sensory organs with which they can 'feel' their surroundings. These sensory legs are always in action . They are capable of loosing  legs if attacked in order to escape  predators however, they must retain at least one sensory leg if they are to survive.

At the front end of their body are a pair of pincer- like jaws called the chelicerae, to either side of these is a pair of jointed leg-like structures called pedipalps.

Harvestman in the UK. 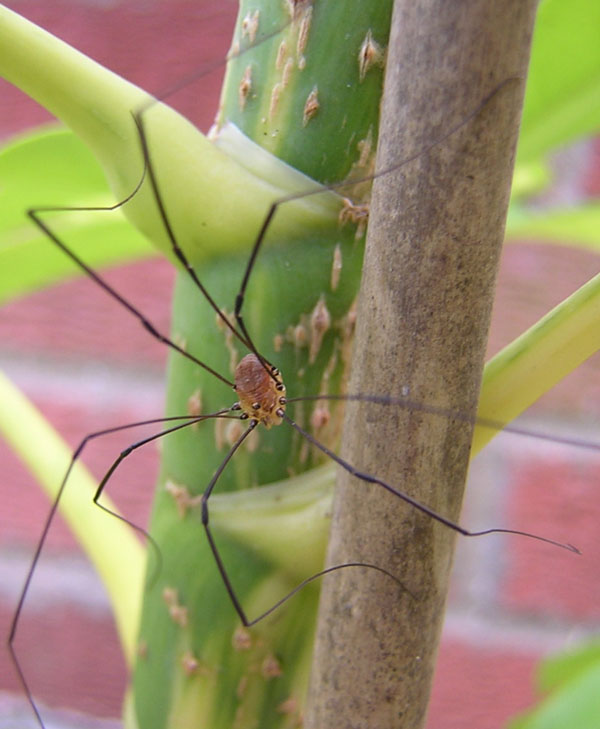 Diet and behaviour of the harvestman.

These creatures are not in any way fussy eaters . Their long legs help them to move  and span large distances between grasses and vegetation. { Not all species have long legs some have much shorter legs and live their lives in the leaf litter or even in the soil}.

Their omnivorous habits mean they will feed on almost anything including dead slugs,,jam,fruits and other decaying vegetation as well as live small invertebrates which they may catch, they will even eat bird droppings,

They are in the main nocturnal species {although they can be seen abraod during daylight hours}  they may be encountered among ivy, among grass stems and other vegtation, under bark,stones and logs and inside damp buildings including sheds and outhouses.

They derive their common name because they become mature at the time of harvesting.

Harvestman on a geranium flower. He is cleaning his leg by running it through his jaws.

All the species lay eggs. The female lays her eggs via an ovipositor, depending on the species these may hatch shortly after mating or indeed several months later. Aunique feature of Harvestman, is that insome species the male takes sole reponsibilty for the care of the eggs which may result from several females. Often they have to guard the eggs from egg-eating females. They tend and clean the eggs regularly. The young when hatch go through four to eight nymphal instars before reaching maturity. Most species have six stages.