In this series we look at the plants that are currently on the UK Red list of conservation concern. In the UK {only} this plant is classified as endangered and is therefore considered to be at a very high risk of extinction in the wild.  Ajuga chamaepitys, is commonly referred to as the Ground Pine. It takes its name from its resemblance to a Pine seedling and from a similar smell to pine when trodden on or crushed. It has many of the characteristics of its more common relative Ajuga reptans, the common bugle  { See Content banners above}. It is a species found in Europe, the eastern part of the Mediterranean and north Africa.

The life cycle is annual,rarely perennial, the majority of seedlings appearing in spring and autumn.. It is a small greyish green plant which attains the height of between five and twenty two centimeters.  The stems are reddish and the foliage often tinged yellow through to red.

It bears yellow flowers, which are often dotted with red , which appear in ones or twos up the stem and among the hairy, much divided,three-lobed leaves which are up to four centimeters long.

The flowers are succeeded by tiny ,shiny,black seeds. They flower from May until October  and the top growth is present from April until November. In the UK it is confined to sites scattered  in the southeast of England, Hampshire, Kent and Surrey, mainly confined to the North Downs of Kent and Surrey.

The species likes  disturbed bare ground, preferring south facing dry hillsides on chalk. It occurs on the edges of cultivated fields, track  sides,and crumbling banks. It can also be found in areas broken up by construction work.

It is very particular in its choice of habitat.Many of its former sites are becoming inhospitable as a result of the changes that have occurred in agricultural practices over the last fifty years or so, the encroachment of scrub and other dominant species which smother seedlings so that they die back and the increases in the use of herbicide spraying have all contributed to the plants decline.

Regular disturbance of the ground is regarded as being critical for the well being of this plant,and in many instances this is not occurring,even where viable seeds may be lying. 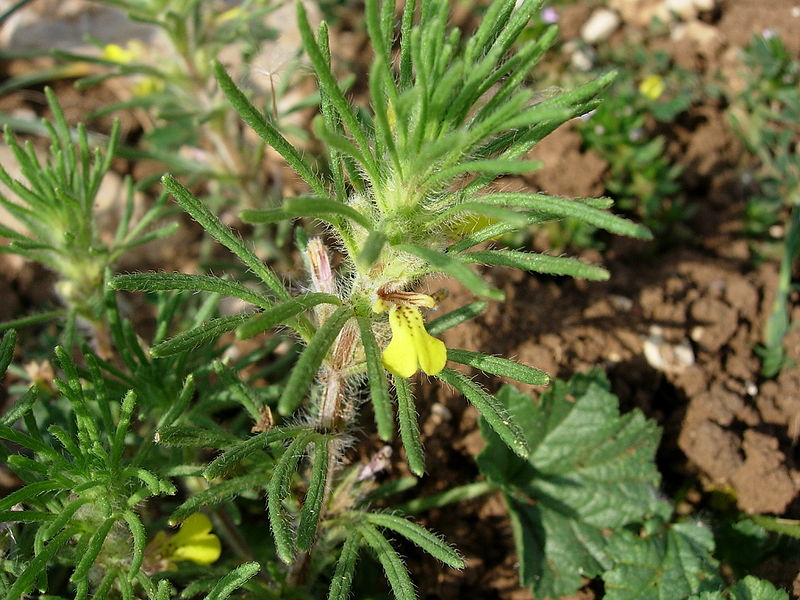 It is a priority species under the UK Biodiversity Action Plan, and in partnership with Plant Life. English Nature has funded work on this species under the Species Recovery Programme. Plant life has mapped out all  known Ground Pine sites and have liaised with landowners to encourage the sympathetic management  of this plant.

Several of the sites where it occurs are Sites of Special Scientific Interest {SSSIs}, and Plant-life have carried out annual surveys at 15 sites known to hold populations. Actions include scrub clearance and deliberate soil disturbance by means of ploughing havhad  positive effect on the populations of Ground Pine.

A number of sites owned by Kent County Council have been managed in the same way and further objectives are to try and recruit volunteers to manage all sites supporting the plant and conduct further research in its biology.

Ground Pine and the Law.

Ground Pine is protected under Schedule 8 of the Wildlife and Countryside Act 1981 {as amended}, which makes it an offence to intentionally pick, uproot or destroy any plants.

They are currently part of Plant Lifes back from the Brink Progamme, funded by English Nature and supporting Charitable Trust and members.

The images on this page may be reused. However, the name of the relevant author must be attributed along with the License.

All other flora featuring on this site are grouped together in the content banners above click on the relevant banner and scroll down.

Flora via Links. Click on the links banner at the top of this page and scroll down to relevant box. click this is a direct link to the article.