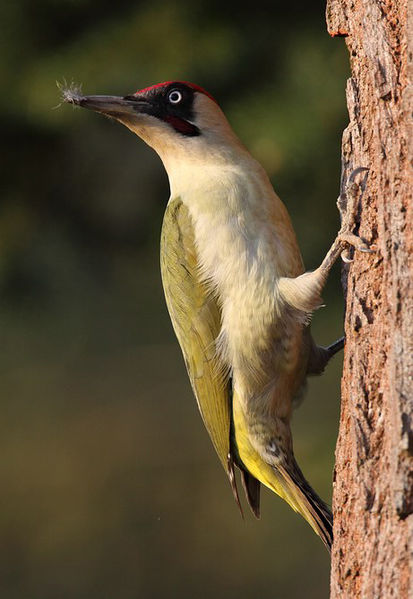 This beautiful and handsome woodpecker belongs to the Piciformes order of birds, and the Family Picidae. The genus name Picus derives from the Greek meaning a woodpecker , and the specific name of viridis derives from Latin and means green.

In the UK the bird is placed on the Amber List of Conservation Concern, the criteria for such a placing is a decline of between 25-50% in population/distribution over the last forty years or so. According to the latest Bird Atlas 2007-2011 it shows that the Green Woodpecker has become more common in the eastern areas of the UK and has spread northwards into eastern Scotland. Meanwhile, it has begun to disappear from western Wales. The UK population is estimated to be around 52,000 pairs during the summer. On the continent of Europe it is 2 concern, most in Europe depleted, the estimated population being between 270,000 to one one point two million pairs.

The Gaelic name for the bird is Lasair-choille, the Welsh Cnocell Werddand the Irish Cnagaire Glas. It occurs in Europe north west Africa and south west Asia.

Here we review the bird, its lifestyle and breeding habits, with notes from past ornithologists and other eminent writers. As always we commence with a description of the subject under review.

This species is the largest of the tribe {in the UK} and is also extremely handsome, few British birds being able to rival the gorgeous colour of its plumage. Although green is the prevailing colour ,this colour fades off to yellow towards the upper part of the tail. Upon the top of the head is a brilliant crimson, the feathers being black tipped with red forming a light penciling. These feathers, sometimes, assume the form of a partial crest. The eye is clear and white.

From the base of the bill to the back of the eye is black and down each side of its throat forming a kind of moustache,runs a crimson streak, bordered with black. The outer wing feathers are barred with greyish black and squares of buff. The female may be distinguished from the male by the fact that she does not posses the crimson moustache. The tail of this species is especially strong and wiry and is used in both the ascent and decent.

The Green woodpecker is 32 cm long { 12 and three quarter inches} with a wingspan of 41 cm {16 and a quarter inches}. Male and female weigh 190 grams. In relation to its body size the wings are medium-short, the tail is medium short, the neck short as are the legs. They hop on the ground and climb around trees. The flight of this species is somewhat undulating and laboured and usually only extends from tree to tree.

In the field it can be indentified by it being the only green bird with red on the head, and, in flight, a conspicuous yellow rump. The bright colours have led to it being mistaken for the Golden oriole.

Illustration of the Green Woodpecker. 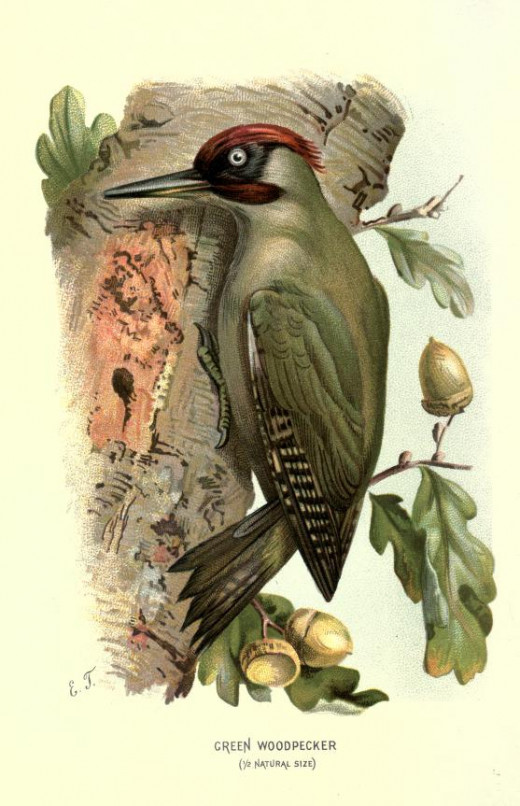 This species was known by a variety of names, most of which are, however, entirely local. Among the many, it was more generally known as the Popin jay, Awl bird and Rain bird. Today the commonest alternative common name is the Yaffle, so named from its far reaching cry, which sounds somewhat like laughter.

One of the most striking things about this bird is the energy and intensity of life it displays in its motions, gestures and calls. When the bird is engaged in searching for food it has always to be aware of the sparrowhawk or some other swift falcon who will readily take this bird if it is unwary. It is also alert to movement in the boughs of the tree for the squirrel, another of the birds enemies.

It is one of those birds that are more often heard than seen, but it may sometimes be detected, as it winds its way from tree to tree with a dipping flight, exposing the yellow rump as it flies on its way. When searching for food on a tree it will alight at the base of the trunk and ascend the bark in a spiral manner, clinging with its feet to the bark and giving itself extra support by means of the stiff tail feathers searching the bark and leaves for insects.

in order to obtain the insects hidden in the crevices of the bar, the woodpecker is provided with a most wonderful tongue, which is approximately 10 cm {four inches } long, it is very prehensile and of a silvery appearance. The tongue is furnished with barbs and a glutinous substance, which can be flicked out at great speed to extract insects {especially ants}, the main stay of its diet. The tongue being so long , is curled around the skull when not in use.

The beak which is wedged shaped and  strong is used to tap the bark in order to induce the insects to emerge from their retreat. Because it is ants that form a greater part of its diet it is seen on the ground much more often than any other species of woodpecker. They inflict great havoc among the nests of these industrious insects. using their strong beak it scatters loose soil to unearth the busy colony, the ants and their eggs are eaten in great quantities.

The birds are solitary by nature and a pair are rarely seen together outside the breeding season. However, studied have revealed that the pair remain in close proximity to each other, probably within calling distance. It is also probable that birds pair for life.

Illustration of a pair of Green Woodpeckers at an ants nest 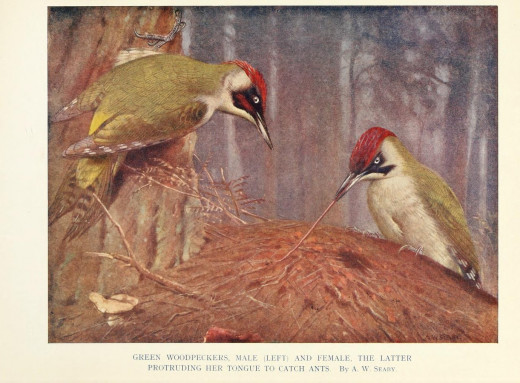 In winter many birds stray further in search of food, and, it was at this time that they were once fell into the hands of Bird-catchers. Butler {British Birds with their Nest and Eggs {1898-98}, reveals to us that " if the Bird catchers can not find a purchaser of it living, will doubtless sell it for stuffing, to publicans and others who like to have bright coloured birds to show off to their friends.

" In 1895 a Bird-catcher, brought me a female of this species, which he assured me was a rare foreign bird, and when I told him in was a Green Woodpecker, he only seemed half convinced. He informed me, that if I did not want to purchase it, he would kill it and stuff it for he knew of no one else who would be likely to buy it as a cage bird. Of course I bought it and put into a spacious cage, up the back of which I placed a large piece of loose bark, behind which the bird retired, just showing its head over the top like a parson in a tall pulpit."

" I fed it on meal-worms, egg food, soaked ant's cocoons, chopped raw meat and hemp seed, but it would not eat, and having spoiled my cage by splintering pieces off it and blunting its bill upon the wires, after thirty six hours I found it dead"

The author somewhat piously concluded, " I much doubt the possibility of keeping woodpeckers when captured as adults, although if hand reared they make tolerably satisfactory pets"

Lord Lilford, another prominent naturalist of his time also alludes to keeping woodpeckers in captivity. " The young birds of this species may be kept alive in confinement, but require a great deal of care and attention and a varied diet. Insect food is essential to their health during their progress towards maturity, and we found it difficult to make them take to any other, but finely chopped or scraped raw beef with soaked bread, crushed hemp seed and filberts {hazel nuts}, will sometimes induce them by degrees to acquire a taste for fruit of various kinds."

" They become exceedingly tame,, and from their quaint manners and attitudes make an interesting in mate to an aviary"

The woodpecker can hardly be said to build a nest, however, it does seem to take an immense amount of trouble in preparing a site where in in deposits its eggs.This is a hole made by the birds in an old tree {sometimes reusing a previous hole they have excavated}. The chips of wood broken off during this operation are removed away from the tree by the birds in order that the hole is not easily detected. There are records of this species choosing burrows in cliffs instead of trees}.

The entrance is small, but a larger cavity is scooped out inside the tree, and upon some of the dry chips of wood the eggs are deposited. Once the hole and cavity have been excavated, the birds may have problems with Starlings, which although smaller, they are much more aggressive, and will often evict the woodpeckers and take over this newly constructed nesting place.

Should the woodpeckers remain unmolested the female will lay 4-6 eggs which are pure white in colour and have a polished appearance. They are incubated for some 20 days by both parents. The chicks are born blind and helpless. They are fed upon the same insect food as the adults. As the young grow they use the warty pads on their hocks to move around, long before they can use their feet.

They often leave the nest before they can fly and move along the branches of the tree. The young birds are not so brilliantly coloured as their parents, and the crimson of the mustache and head is much fainter. The black too, is marred by feathers tinged with greyish white, while the breast from the chin is much lighter, and the green generally not so bright. Their plumage has an overall speckled appearance 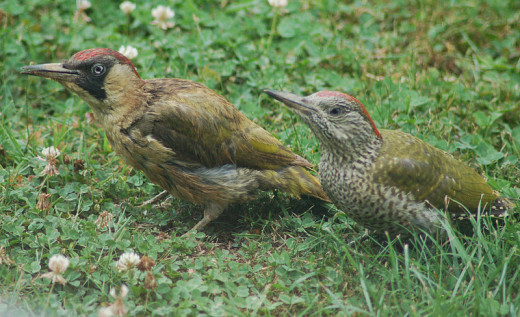