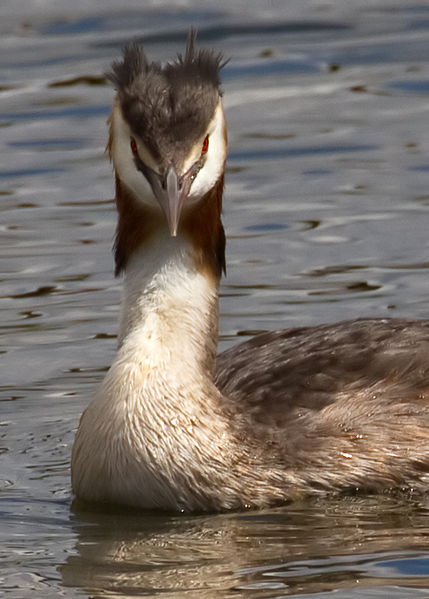 Great Crested Grebes belong to the order of birds known as the Podiciepediformes and the family within that order of Podicipedidae. They are placed in the genus Podiceps and allocated the specific name of cristatus. Podiceps from Anus +pes foot the feet are situated well back on the body. cristatus from crista meaning a crest.

They breed in North and central Asia, North Africa, they are local in East and South Africa, Australia and New Zealand. The Gaelic name for the bird is Gobhachan-Mor the Welsh Gwyach Gopog, and the Irish Foitheach Mor.

The above information is courtesy of the BTO.

Here we look at this species its lifestyle and breeding habits along with historical observations from past ornithologists and other eminent writers. As always we commence with a description of the subject under review. 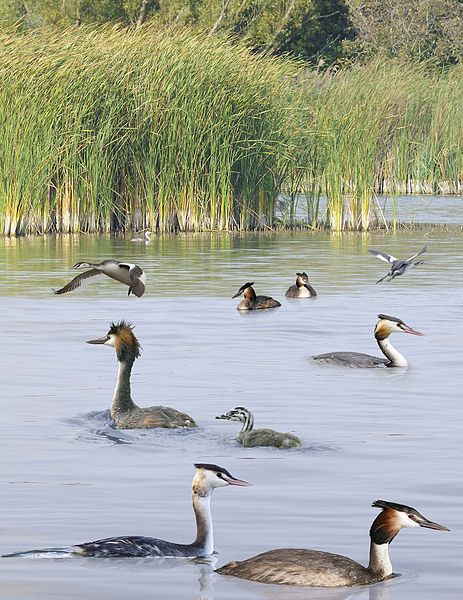 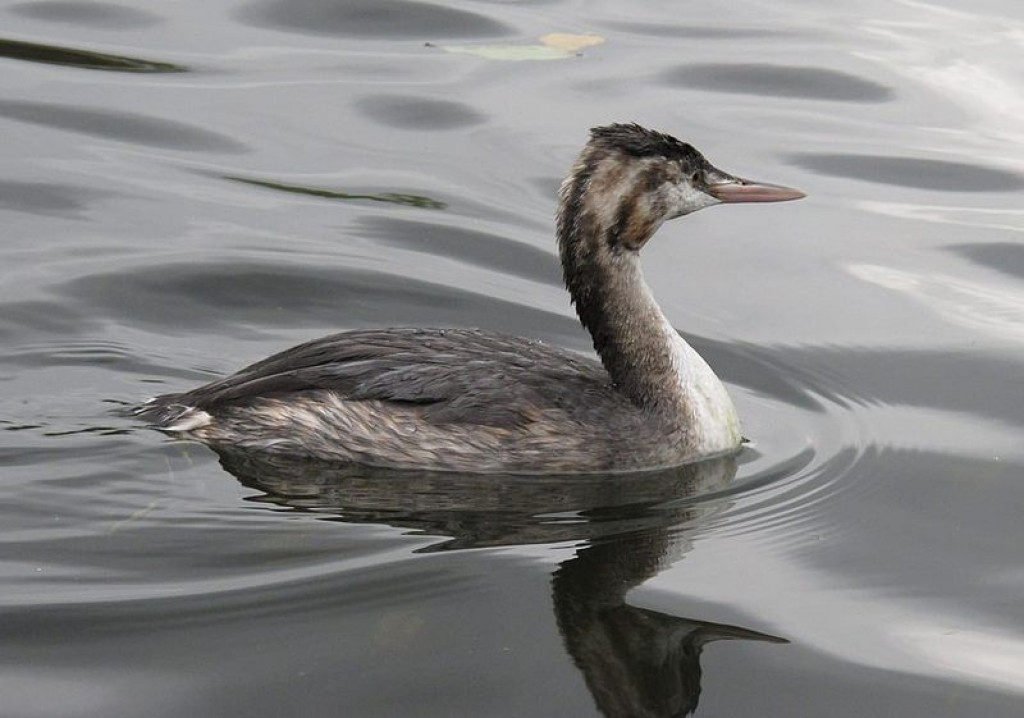 Description of the Great crested Grebe.

This bird has black head plumes, a white face, dagger-like bill, white breast and neck. They have a unique ruff, slender neck, dull dark back.The upright slender neck with a silky white front and bright white breast are characteristic.. In summer, its black cap extends into a double, backward facing tuft and a frill of chestnut appears on the face.

The adult, in summer has the forehead, crown and nape of of a blackish brown, glossed with dark green. The feathers on the crown elongate into a flat crest,longest at the sides and somewhat forked.The hind neck is greyish brown, the lower back and rump a paler uniform brown. The lores { between the nostril and the eye} buffy white, continued in a narrow line over the eye to join the white on the sides of the face. Chin and the upper part of the throat white. From the hinder part of each side of the head, springs a ruff or frill of elongated feathers, which is only just interrupted on the throat. The fore-part of this ruff is light chestnut, the colour merging into the white of the face, the hinder part the same colour as the crest. This ruff all but disappears when the bird is in winter plumage.

The iris is a crimson colour. Bare space from the bill to the eye reddish brown {dusky in summer}. The legs and feet are a blackish green on the outside lighter and yellowish on the inside.

Its mode of flight is similar to that of the ducks, long neck stretched out, short wings moving rapidly, feet outstretched. Because the feet are placed right back on the body it makes it difficult for the bird to walk, hence it is very rarely seen on land.

According to the Rev.Morris {1896} this singular looking bird is indigenous in many parts of the UK, in Lincolnshire and Norfolk { east England}, Shropshire and Wales, and its occurrence had been noted in Cumberland { now Cumbria north west England} In Yorkshire one was procured near Doncaster at the beginning of 1837. in Hampshire one was seen on Southampton water at the end of March 1849. Their haunts, he says, are the lakes and large ponds, rivers and creeks of the sea, if these are bordered with reeds and other such cover. In winter the frost and ice compel them to seek out the coast and the estuaries of rivers.

Towards evening this species becomes active and lively having previously been disposed to float about quietly, with the head drawn back in the plumage.

These birds were once mercilessly persecuted as the skin became a fashionable substitute for fur, and several were exhibited accordingly, in the Great Exhibition of 1851. By the 1860 there were thought to be less than 100 birds remaining in the UK. Indeed they were on the brink of extinction in the UK. collectors that were in the habit of supplying Grebe skins to the dealers in Grebe plumes, being very fashionable products for ladies 'muffs' and trimmings and hat feathers. it is therefore understandable that when people were around they kept well away from the banks.

Other threats were weasels, cats and rats that delighted to feed on their eggs. they are also thought to be susceptible to avian bird flu. The species is hunted for commercial {food} in Iran and for recreational purposes.

These birds can fly well but during the time they are engaged with the nest, they resort almost exclusively to diving at which they are adept, for security only their heads to breathe above the water,after remaining beneath the surface for a hundred yards or more. they swim admirably and dive with remarkable quickness. When on the surface they float low.

Butler- British Birds with their Nest and Eggs {1896} ,conveys that the return of the Grebes to their breeding haunts in spring is dependent on the weather, " I have known them put in an appearance in Oxfordshire { southern England} as early as the 12th of February, but in 1866, they were delayed on the same water by the severe frost until the 28th of March, the ice only having broken up a week before"

Some birds pass on after a short stay, these are thought to be the young birds of the previous year, which will not breed until the following season.

The food procured by means diving is made up of small fish,water insects and their larvae, One writer notes " it is a remarkable fact that the specimens obtained of this species,invariably prove to have feathers in their stomachs from the breast of the bird itself" 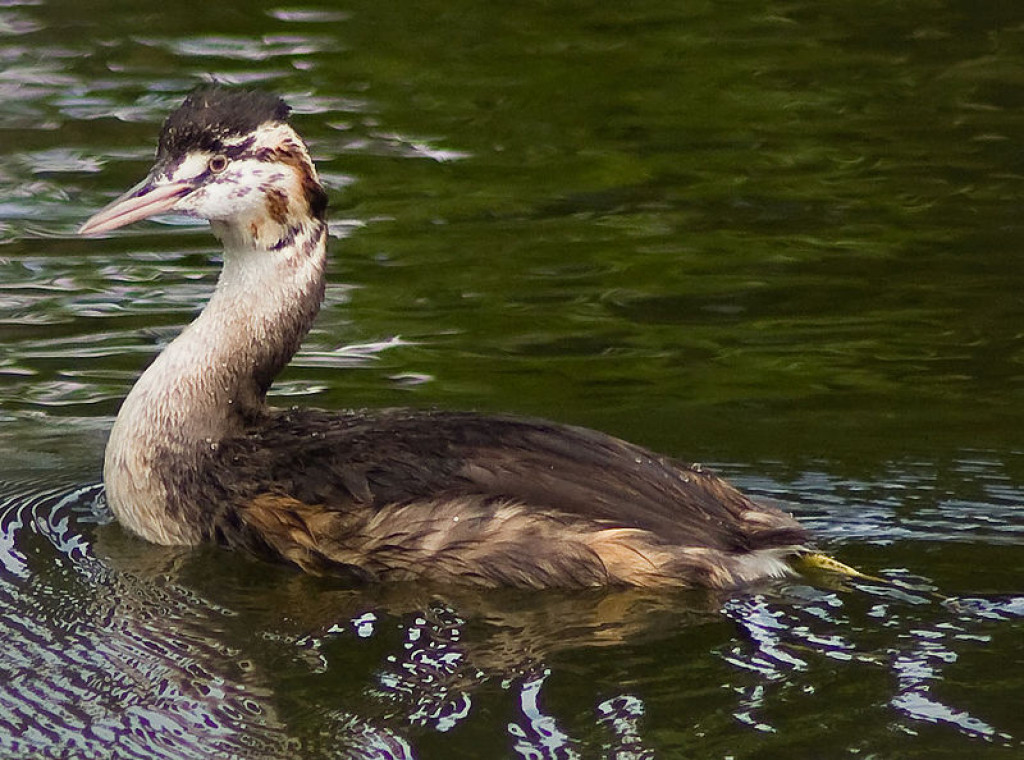 If they are not already paired up on their arrival to their breeding haunts, pairing takes place immediately on arrival. In either case an elaborate courtship display is carried out between the two birds, the male paying a great deal of attention to his partner.

Great crested grebes perform their amazing 'Penguin ' dance. It commences with a lot of head shaking and fluffing out of the crest feathers. Bowing and nodding and alternately raising his long neck and lowering it until his head rests on his back, the male swims round his mate, then draws quietly alongside her. He offers her a gift in the form of a piece of reed or other aquatic vegetation. There is often observed, as the birds touch bills, that the shape of their necks is aptly heart-shaped.The performance ends with both birds rising up on the water and paddling rapidly. In this upright position they resemble a pair of penguins. 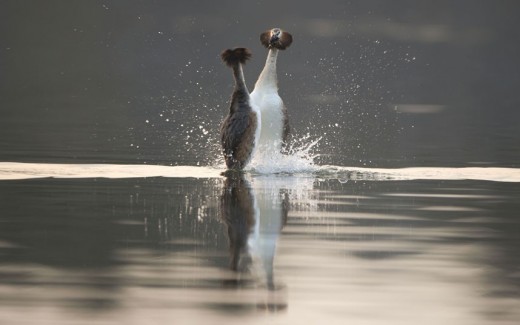 The nest is usually placed just inside the reeds or rushes. usually it is a floating structure moored to the rushes. It consists of a platform of green rushes, when fresh, reeds and other water plants, merely laid on top of each other and not worked into any shape. Generally it is just raised above the water's surface and as a consequence is often quite wet. Both birds share the task of nest building.

The eggs generally three to four when first laid are a creamy to greenish white colour,with a chalky surface,of irregular and varying thickness,overlying a shell tinged with green. However, from constant contact with the more or less decaying vegetation of the nest and the birds feet they are often stained brown before very long.

When leaving the nest the bird covers the eggs, but it seems opinion seems divided as to whether this is to conceal the eggs or to keep them from the cold,or indeed both. The eggs are incubated by both parents for a period of 27 to 29 days. The young birds chirp and swim as soon as they are born. they look comical little creatures having the body brown with the head, neck and under parts white, with longitudinal black stripes across the body and a grey patch on the side of the head.

The young undoubtedly fall prey to the large Pike that share their haunts. The young birds that survive predation follow their parents. Grebes take great care of them where possible. When the chicks are quite small, they often allow them to ride upon their back, the feathers of the wings being held in such a position to form a kind of cradle. At the first sign of alarm they are hurried off into the security of the reeds and other waterside vegetation. One or two broods may be raised depending on the conditions. 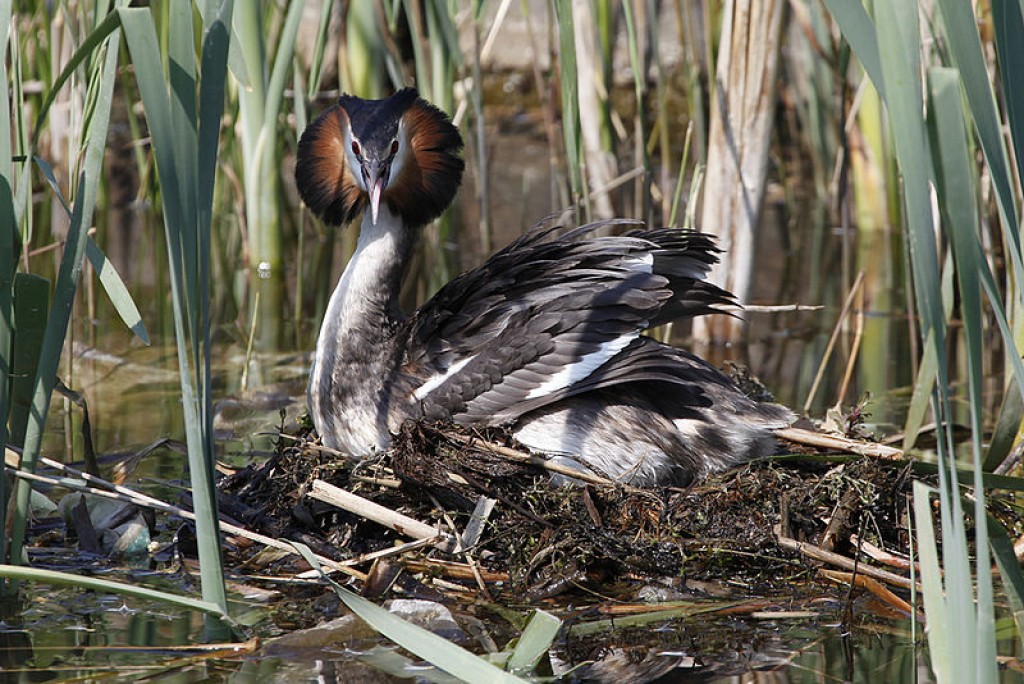 The prominently striped chick is unmistakable. 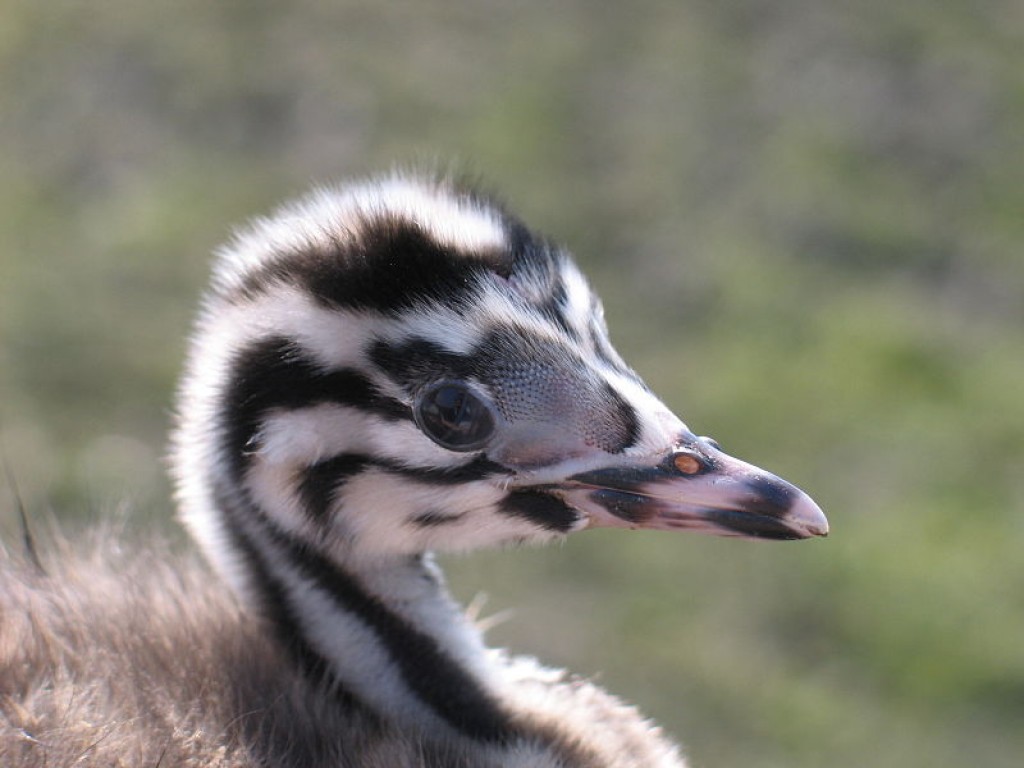