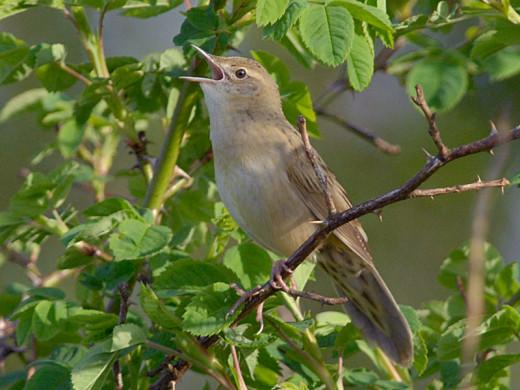 Here we review the Grasshopper warbler which belongs to the Passeriformes {perching birds} and placed in the family Locustellidae and the genus Locustella, it has been given the species name of naevius {spotted}.

The warblers of Europe are a very interesting group of birds { as are the warblers that occur in the USA and other parts of the world}.

In the UK it is on the Red List of Conservation concern. This makes it a species of High Priority and a Species Action Plan has been formulated and is currently being implemented on the birds behalf, in an attempt to halt or reverse the decline.. One of the main criteria for being placed on the Red list in the UK is that the population/distribution has declined by over 50% during the last forty years or so. There is an estimated 11,000 pairs in summer in the UK.

On the continent of Europe it is not a species of conservation concern with an estimated population number of 340-700,000 pairs. It breeds also in Eurasia and winters in north Africa to India.

Here we look at the lifestyle and breeding of this handsome warbler both currently and through the eyes of past ornithologist, along with some historical facts. as always an apt place to commence the review of our subject is by a description of the bird.

According to H.E. Howard, in his book 'The British Warblers ' 1907-1914, Great Britain was apparently one of the principle breeding grounds, although he conceded that over the whole area it could only be described as locally distributed. he states we find it rare in Cornwall {south west England}, but in the remainder of the southern counties, including Devon, a regular but local visitor. Further north it appears to be more common, and in parts of Oxfordshire, Cambridgeshire, Gloucestershire, Worcestershire, Shropshire, Yorkshire,Cumbria, Durham and Northumberland it is more common and numerous.

He conveys that during his time the greater part of Wales is unsuited to its habits, consequently it is very local. Howard did write however, that he had heard it regularly on Anglesey. In Scotland, his observations revealed that they were encountered in the borderlands becoming much more scarce the further north one travelled. In Ireland it was generally distributed but was said to be especially numerous in the counties of Dublin, Wexford and Waterford. 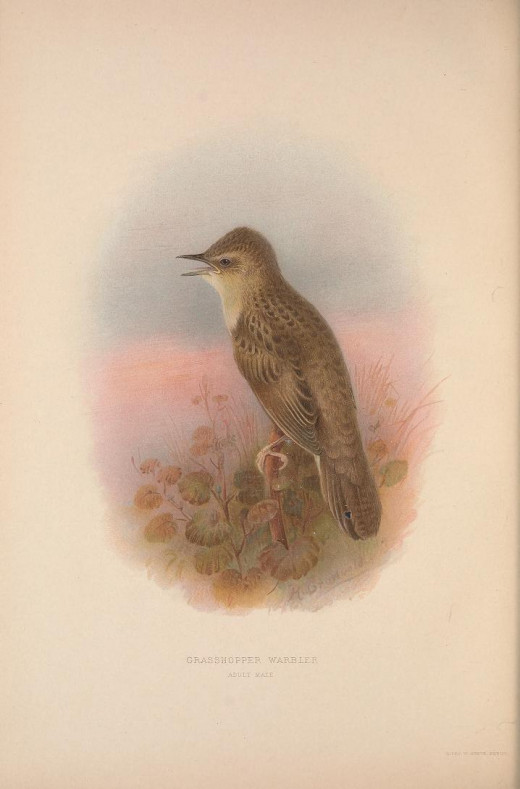 The bird arrives in Britain during mid-April, however, they start their stay with us in an erratic manner. They seem to favour one particular district one year and deserting it the next. In this respect they do not seem to be influenced by climatic conditions.

As an example of this , there is on record showing that in the years 1807 and 1903 they were so plentiful that during the first few hours of their arrival their haunts seemed to be alive with them, yet these two years were respectively very hot and dry, and very wet and cold.

If it were not for its song, which is penetrating and warrants ones attention, it would be most difficult to find, for it is particularly skulking in its habits, especially during the period between eight in the morning and four in the afternoon {in my experience}

It spends the greater part of its time either on the ground in the dense undergrowth, creeping in low thick bushes a few feet high, or searching the tall thick hazels and hedgerows for food, ten or twelve feet above the ground, but seldom appears to frequent trees, and has at all times, even when it is not aware of human presence, a great aversion to show itself in the open.

During the incubation period, when the song all but ceases, they are even more difficult to locate, their skulking habits being more marked, since the sexes go to considerable trouble to conceal themselves.

They choose for themselves varied habitat, but perhaps the most frequented are the Osier beds, which a year or so previously had been cut down, small coppices with plenty of of thick undergrowth, wasteland covered with gorse, swampy, but not to wet ground with an abundance of Juncus effusus, Clover fields and thick hedgerows either by the roadside or next to fields of corn. Wherever, the location thick undergrowth seems to be a necessity for them.

On arrival the males are often detected by their 'song' which is unlike the song of most of the warbler tribe, but once heard is never forgotten and from which it has earned the name of 'Grasshopper', when the bill is wide open, and the body quivering with effort, there is a monotonous 'reel' similar to the noise produced by the insect.

Until pairing has taken place the song is almost incessant, morning and evening, rare during the day time , more frequent at night. On the arrival of the females in the latter part of April, ten days or so after the males arrived, the courtship is immediately commenced..the courtship ritual is very interesting. If one is listening during the first few hours of daybreak it is possible to tell whether any females have arrived during the night.

At such times the song is intermittent, but very vigorous, while it lasts-a pause, then a short trill, a longer pause and a longer trill, and so on according to the time the male is able to tear himself away from the attractions of the female 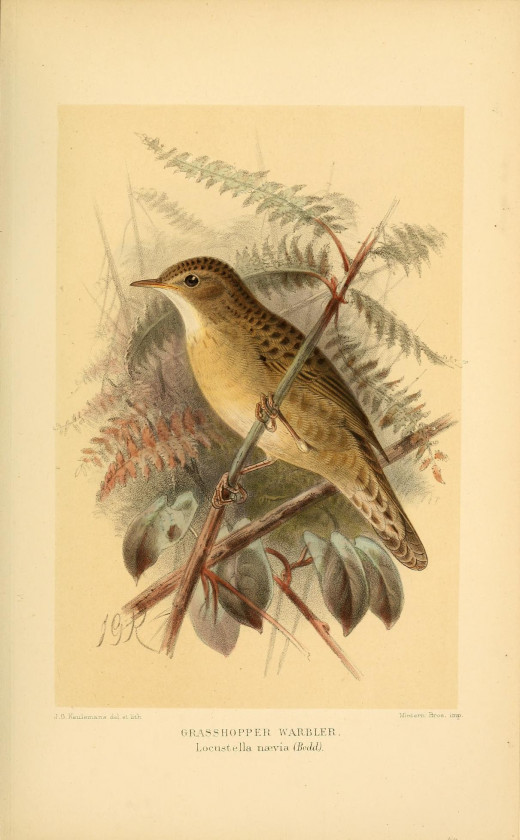 The female will walk or run , as a rule it is a sedate walk, among the dense undergrowth, or threading her way through the branches of some small bush, where she occasionally pecks or pretends to peck at something as she passes. She appears to show an air of complete indifference to her suitor, never even pausing to look behind.

He however, sometimes leaves her either to sing, or with a quick darting flight he will chase away another male which has intruded on to his territory. She, is immediately aware of this temporary desertion, and if he is away to long she becomes impatient, stops her aimless wanderings through the undergrowth, flies to a low branch in some bush, assumes an air of anxiety and commences to call vigorously until he returns to her.

The positions of the male when following her are noteable, sometimes he walks, sometimes runs along the branches or on the ground. the tail is spread out and either raised or lowered, the wings fully extended and slowly flapping up and down. The feathers on the back of his head are raised, those on the body thrown out and the throat is distended.

The effect has he walks along the branch is amusing to watch and is enhanced by the curious habit, common with so many species, of carrying something in his bill, a piece of dead grass, perhaps, but more frequently a dead leaf, sometimes he will carry two or three dead leaves together, and in a dim light it can give the impression of some animal walking along the branch.

This habit, whatever the reason, seems to be an indispensable part of the courtship and is very implanted in the male. before following the female the leaf or piece of grass is searched for with impatience, as the female does not stop but calmly carries on as if he was not there. As a consequence he grabs whatever he can get hold of, and can conveniently carry, will do for the purpose.The graceful way which these birds walk along the narrow branches and twigs while keeping a perfect balance is amazing. crawling his way up the bush their whole appearance is mouse-like, especially as woodmice themselves are very fond of climbing up and settling in some hazel or elder bush

Illustration of a female grasshopper. 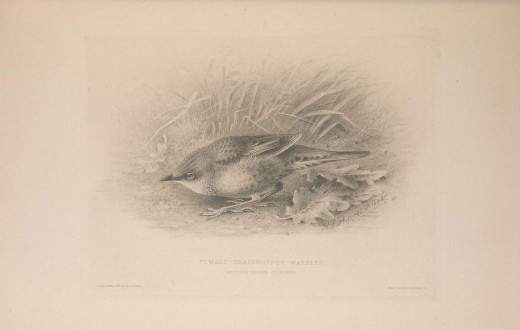 The nest of this elusive feathered mite is composed principally of dried grass interwoven with dried leaves and bracken. Even when the young are hatched it is always extremely difficult to locate. It is situated, sometimes almost on the ground, sometimes a few feet above it and may be placed in a variety of locations. it may be in the center of a clump of Juncus effusus, underneath a thick mass of some rush overhanging a small water course, in the middle of clumps of long,dead grass or low down in a thick gorse bush.

Five to six eggs are laid. During the incubation period which lasts for 14-16 days the female seldom leaves the nest and when she does she is relieved by the male. However, should she be disturbed she will slip on to the ground where she is well camouflaged, and when the threat passes or if she is not to alarmed she will soon return, threading her way through the vegetation in a stealthy manner.

The chicks upon hatching are blind and helpless. The parents show great devotion to their young family. when going to, or coming from the nest they tend to run, rather than fly, generally using a call note, which is thought to convey to their young charges, to be silent.When feeding their young they tend to bring squashed insects in their bills. The main food seems to aphids which they harvest in large numbers, along with woodlice, spiders and small moths. The young soon grow and the chicks leave the nest within a few days. At this stage the young grasshopper warblers have few feathers and their naturally longish legs give them a clumbsy appearance, but in reality they are capable of running quite fast. They continue to be fed by the parents until they become independent . When this occurs the parent birds will commence the breeding operation once again to raise another brood of these elusive little warblers. 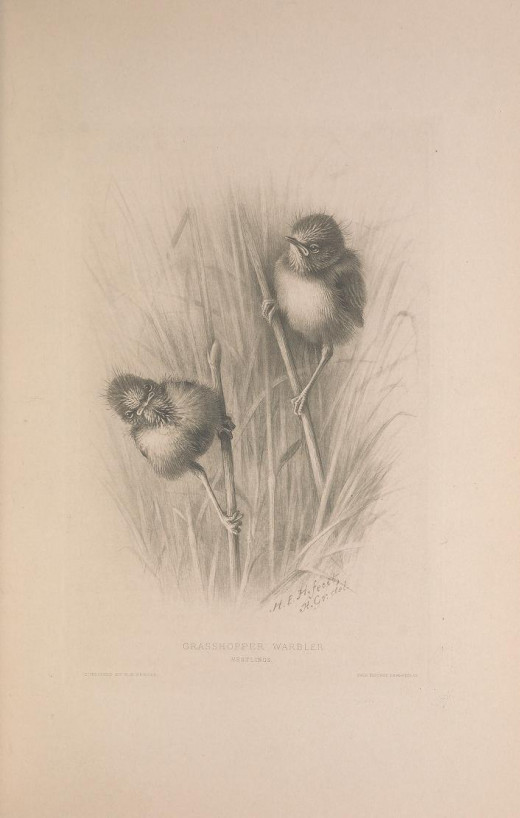