STRUCTURE OF GRASSES----There follows a basic structure of grasses which may hep the reader to understand, the description of the grasses below, a little better. According to Mrs Plues {1867} grasses are the simplest form of a perfect plant.. They may be described as a herb with a hollow stem, only solid at the joints. The leaves have parallel veins, and entire margins. they sheath at their base and enclose the stem more or less, attached to it by a small scale or ligule.

The inflorescence  is composed of many florets, arranged in spikelets in the form of a spike, raceme or panicle which consist of three or more scales known as glumes that are empty, one or more flowering glumes containing the fructifying organs, the same number of palaea or still thinner scales, and the ovaries, stamens etc, according to the number of florets. each floret {if fertile} produces one seed, the embryo being very small.

The upper part to which the spikelets are attached is called the rachis.  The sheaths are a continuation of the leaves which embrace the stem, opening on one side and are provided with a scale or lugume. The ligule a is very small membranous scale-like structure, attached to the inner-side of the leaf and having its origin at the top of the sheath, just where the leaf diverges from the stem.

A spikelet is composed of three or more scales or bracts called glumes, the two outer ones of which are nearly always empty. The glumes occupy the position of the calyx of other flowers.

The cockspur grass belongs to the Order of grasses known as the Poales and the family Echinochloa. The plant has many synonyms the most common being the Barnyard grass {USA}.

The root of this species is annual, and fibrous.The stems are erect and furrowed. The foliage is broad, pointed, rough beneath and the central rib is clearly marked. The sheaths are tumid and the panicle arises closely from the uppermost one.

The panicle is compound,dense, the main branches distant below crowded above, rough from six to ten in number, with a very few short branchlets, bearing clusters of stalk-less spikelets, with long smooth hairs springing from their base.

The spikelets are all crowded, all turned to one side, first empty glume  broad and short, the second as long as the floret, rough with short hairs and three ribbed, the third equal length, and terminating in a short or long bristly awn.

The flowering glume very thin and transparent, smooth , glossy, awnless, The palae of the barren floret is small and polished. The ovary is ovate, styles long and slender. The stigmas are feathery. There are three stamens long and thread shaped. The anthers are cloven at both ends.

This is a coarse grass, undesirable for agricultural purposes, but showy in appearance, but was once considered a good species for landscaped gardens, especially when the ripening seeds weigh down the panicles, and causes the culms to arch downwards.

It is not a common grass in the UK, and is usually only found as a arable weed in cornfields. It flowers all summer long and in to autumn and this long flowering season also attributed it to being a garden plant. It is native to Europe, North America and  the East Indies.

It should not be confused with the Cock's foot below.

The roots of this plant are perennial, fibrous, and tufted. The stems cylindrical, upright, ribbed and rough, they attain the height of two feet + and are leafy. the leaves are flat, linear, acute, flaccid, rough at the edges and of a dull green colour. There are five or six to the stem, the sheaths are rough ,striated and the ligule is long and ragged. The panicle is erect, slightly branched, and spreading. The rachis is also rough, with a few branches the lowest much longer than the others standing nearly at a right angle with the stem. each branch with a tubercle at the base. The spikelets are flattened, ovate, three to five flowered, crowded in dense clusters and produced on very short stalks, several at the end of each branch.

The outer glumes are unequal, lance shaped, strongly keeled, the keels very hairy on the upper half, and ending in an awn-like point. The flowering glume, is long closely resembling the outer ones, the point longer, five ribbed, the palea membranous, fringed at the edge, bifid at the summit.

The cock's foot is a very common grass, not only in pastures and meadows, but in orchards, waste places and by roadsides. It was originally introduced into England from Virginia by the Society of Arts. It has become completely naturalized. it is found throughout the UK. and flowers the whole summer long.

It thrives best in damp situations, but it will still grow quite well even in drier situations and it will tolerate constant shade. It is hardy and forms at times dense tufts, and is easily recognized by its tall strong stems, and oddly branched panicle. The horizontal branch at the base of the plant has a fanciful resemblance to the shape of the solitary claw on the Cock's foot hence the common name has derived.

As an agricultural grass it possesses very high qualities but it has to be managed carefully. Both the leaves and stems are highly nutricious in the early growth, but when old and rank their nourishment is gradually diminished. As a consequence it is regarded as being better for pasture than for hay, as the constant grazing sends up frequent new growth.

It seems to grow best in deep soil as the roots strike deep. When allowed to grow very high it becomes very coarse but when kept cut or grazed regularly it is a first rate grass for sheep. in an essay on Grassland-inserted in to the communications to the Board of Agriculture, it was stated that women and children made good earnings by gathering the seed of the grass at four shillings a bushel.

Farmers were recommended to sow two bushels to an acre mixed with ten pounds of red clover. By the time the clover had worn out the grass filled the land. It was also thought preferable to sow the seeds with equal quantity of other grass seeds, it was said that in this way the most superior permanent pastures are formed.

In the Norfolk Report on Agriculture 1788, it stated that " Sir Mordaunt Martin, observing, by experiment that the grass grew four inches in less than three days. Determined to attend more particular to it, he remarked that when sheep were let out of the fold, they ran over everything to get at a balk that was full of it, and ate it in preference to other grasses."

In some parts of Norfolk it was referred to as 'cows' grass from the animals being very fond of it. he began to cultivate it in 1794." It grows at mid summer in a drought when everything else is burnt up. I sowed with nonsuch, instead of rye grass and find it more profitable"

Mr. Overman, also observing the eagerness with which sheep, when let into a field at Burnham Market that had some cock' foot grass in it, ran over rye grass and everything else, to get a bite of the plant, thought it worth cultivating, and sowed about an acre on the dry gravelly part of his farm, just above a marsh. This spot was the only one in a large field that did not burn in the severe drought of the year 1800. It convinced him of the value of this species.

The grass soon matures, and thrives in a variety of situations, produces large quantities of herbage, grows very rapidly and is favourite of every kind of cattle. Professor Buckham {again in the 1800s } remarked of it " That it is capable of giving a large crop as my experiments fully prove. Nor only the culms but also of the aftermath. The culms however, are somewhat coarse, but with their nutritive qualities must be valuable especially in chaff. " 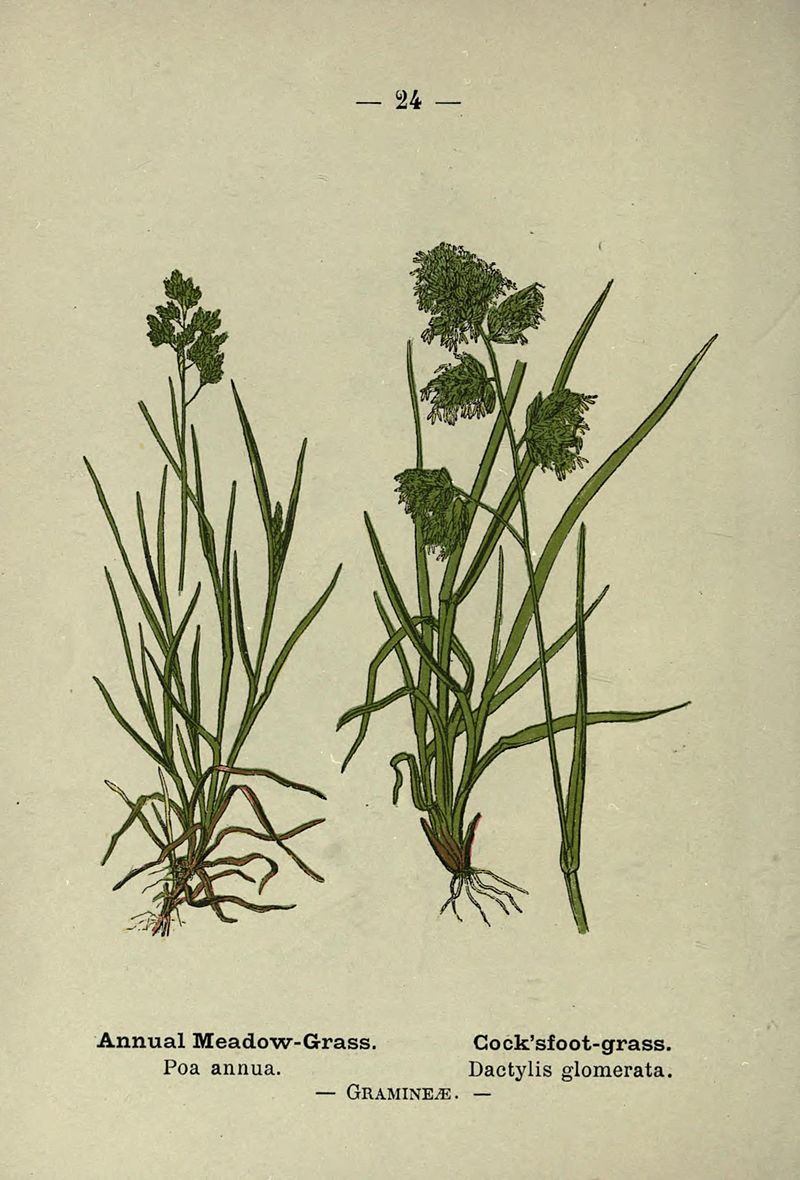 According to the United States Department of Agriculture Natural Resources and Conservation Service the grass can become invasive. In the USA the grass is referred to as Orchard grass. As regards livestock it states the primary use of Orchard grass is for forage production.

The images on this page may be reused. However, the name of the relevant author must be attributed, along with the accompanying License.

Other flora that is featured on this site can be viewed by clicking on the relevant content banner on the right hand side of this page. {they are all grouped together}

Flora via your search bar banner.