Before we commence with the review  of the Spreading millet grass it would be apt to explain the basic biology of grasses. According to Margaret Plues in her book ' The British Grasses' 1867, grasses are the simplest form of a perfect plant. It may be described as a herb with a hollow stem, only solid at the joints.

The leaves with parallel venation and entire margins, sheathing at the base and enclosing the stem, more or less attached to it by a small scale or ligule. They have inflorescence  consisting of many florets, arranged in spikelets in the form of a spike, raceme, or panicle, and, consisting of three or more scales or glumes, that are empty, one or more flowering glumes that contain the frutifying organs. The same number of palaea or still thinner scales and the ovaries, stamens etc, according to the number of florets.

Each floret if fertile produces one seed called the embryo which is very small.

The upper part to which the spikelets are attached is called the rachis.

The sheaths are continuous with the leaves, they embrace the stem, opening on one side and are provided with a small scale or ligule. The ligule is small, membranous scale-like process, attached to the inner side of the leaf and having its origin at the top of the sheath, just where the leaf diverges from the stem.

A spikelet is composed of three or more scales or bracts called glumes, the two outer glumes are almost always empty. These glumes occupy the position of the calyx of other flowers.

The fruit is one seeded, called a grain, the husk or pericarp surrounds the seeds and sometimes the palea  adheres to it, so that it remains enfolded between the flowering glume and the palaea.

Milium resembles a sort of corn used in ancient times, and is remarkable for the number of seeds called milium from the Latin mille indicating a thousand. It belongs to the order Poales and the family Poaceae and placed in the genus Milium. The specific name is effusum indicating spreading, and it is often referred to as the spreading millet.

The root is perennial and fibrous, with creeping shoots. The stem is erect, tall , often attaining the height of four to five feet, the stems are slender and glossy. The leaves are short, flat, smooth, four to five in number, the sheaths are small and striated.

The ligules are oblong, the panicle widely spreading, hence the specific name, they are erect, the branches long and slender, placed in bundles at intervals along the rachis, the spikelets are numerous, small ovate, one flowered. Empty glumes are equal, broad membranous, concave, but not keeled, nearly smooth. the fowering glume slightly smaller smooth and glossy. The palea, a little smaller again, of similar texture, faintly two nerved and along with the flowering glume enveloping the seed.

This is a very familiar species to everyone who observes grasses at all. Its great height, widely spreading panicle, and multitude of small florets, generally of a pale green tint, but sometimes in exposed situations, turning purple, ensure ones attention.

Even in woods so dense that only Helleborine can endure its shadowy depths the spreading millet lifts its airy panicles, and here it grows very high, over topping  its five feet.Its leaves and florets are pale, but they may be encountered swaying in the sunshine under the trembling Poplar leaves.

As long as the trees stand in close ranks, the spreading millet has the conditions that suit it best, and during all the summer months, its panicles, either quiver with green blossoms or grow stately and calm under the burden of numerous grains of seed, wrapped in glossy coverings.

However, if the trees are cut down or coppiced you will see what a difference to the millet grass it makes the following year. On the low ground, where there is moisture enough to nourish the grass, it grows tall and stately as before, but now the trees have gone and the sun beats down upon the opening florets, they heat under its beams, and soon the green colour fades and they glow with a purple tint or violet.

On the high ground, the delicate grass fares worse, their the foxglove rises, and one or two other plants, that are capable of withstanding exposure and a rocky soil, but the millet wilts for shade and moisture, and not only looses its fresh colouring, but becomes stunted in growth that it can hardly be recognized as that tall stately grass of the previous summer. 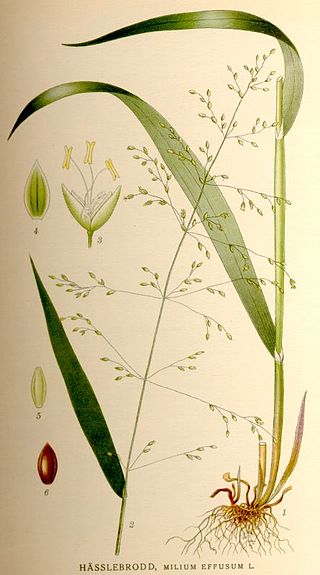 This grass is of little value to agriculture, and it contains little nutrition. However, to wild birds it is a good food source. Even game birds will take the seeds this species makes available and in days gone by Game keepers would have them collected for winter food when corn was expensive.

The species grows abundantly in moist shady woods in Great Britain, Lapland, Norway, Sweden the USA and Canada. Its culms remain standing through the winter, unless broken down by storms, and they form beautiful objects glittering with hoar frost.

The images on this page may be reused, however, the name of the relevant author must be attributed along with the License.

All other species of flora that feature on this site can be viewed by clicking on the relevant content banners on the right hand side of this page. {they are all grouped together}

Flora via Your search bar banner.