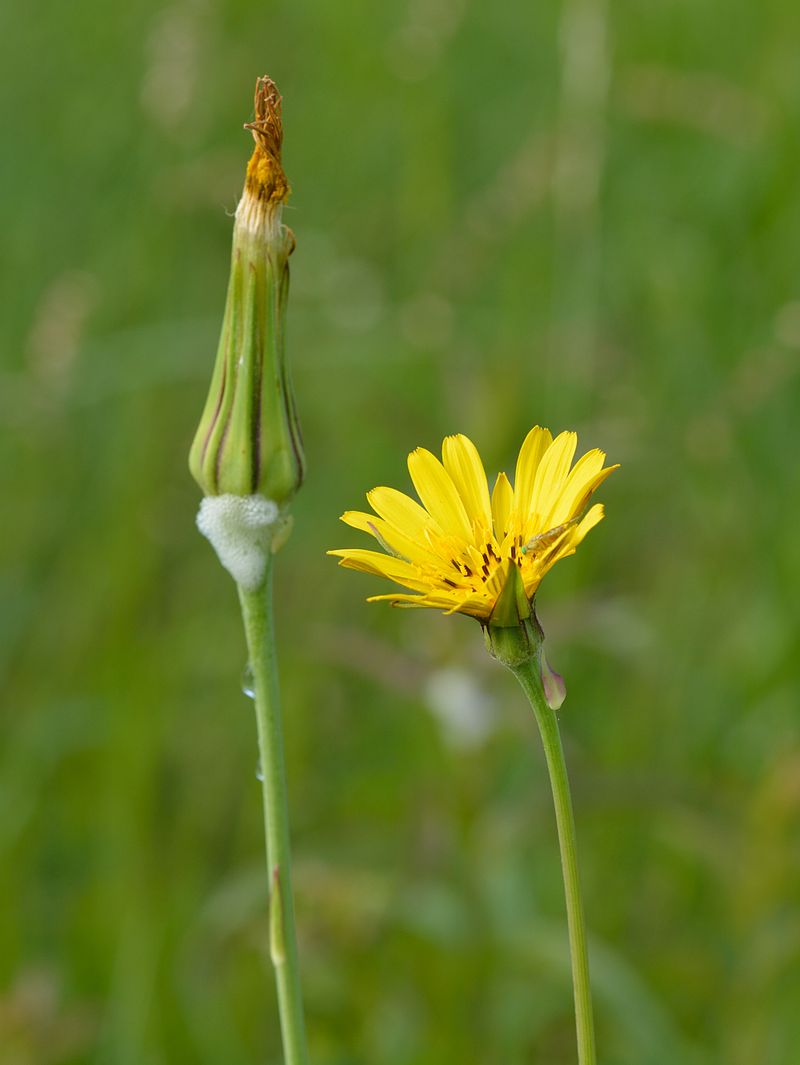 This is another species that produces dandelion-like flowers. However, because this one attains the height of up to 75 cm it is unlikely to be mistaken for other members of this group of plants. They belong like the other members to the Asteraceae family {formerly Compositae} within the Order Asterales.

The genus name derives from tow Greek words that together mean Goat's-beard. While the species name of pratensis reflects its natural habitat {of the meadows}.

The country names of Jack-go-to-bed-at -noon alludes to the fact that flowers open in the morning and close at noon regardless of the weather.

The grass-like foliage of the Goat's-beard.

This species has an erect, slightly branched stem, attaining the height of one to two feet. The stem arises from a perennial deep growing taproot. The leaves are long, narrow and grass-like in appearance, they are simple {no teeth} and broaden at the base to sheath the stem, they are somewhat bluish green in colour, the lower ones eight or nine inches long { Up to 23 cm }. the upper ones much shorter.

Each flower stem has at its summit, a single , large flower head with the stem slightly thickening just below it. Immediately below the flower is a ring of about eight narrow  lance-shaped bracts, which, when the flower is expanded, spread out in rays beyond the florets, which are golden yellow colour and all are strapped -shaped. When the flower closes the bracts are upright and enclose the florets. The flowers open at day break and close and noon or just before and also in cloudy weather. I have walked past a field redolent with their flowers standing prominent above the grasses. On my return journey in the afternoon it is as though they have all disappeared the bracts enclosing the flowers blending in perfectly with the grasses.

The flowers are followed by globular seed heads, about the size of a tennis ball,  in the similar manner as those of the dandelion 'clock' which are carried away by the wind in a parachute fashion.

Cowley wrote of the flower times--

" The Goat's-beard, which each morn abroad doth peep,

But shuts its flowers at noon and goes to sleep".

They flower from June until late July. They may be encountered in Grassland, meadows, pastures, dunes, waysides and waste places. 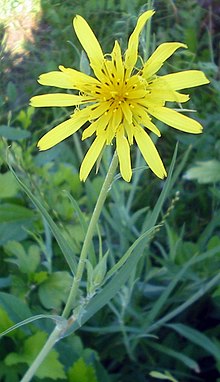 In times gone by  the Goat's-beard was commonly used in the kitchen. The tapering roots were formerly eaten as we now eat parsnips. They were also roasted and ground up as a substitute for coffee. The flower stalks taken before the flowers appear , were cut up into lengths and boiled like asparagus they are said to have a similar flavour and to be almost as nutritious. The Roots were dug up in the autumn and kept in sand until needed.

They were just as popular in medicinal preparations in days gone by but fell out of use during the 19th century. The fresh juice was used to dissolve bile in the manner that salts were used without having the acrid elements of the latter. The roots were boiled and eaten to help those recovering from a long illness.