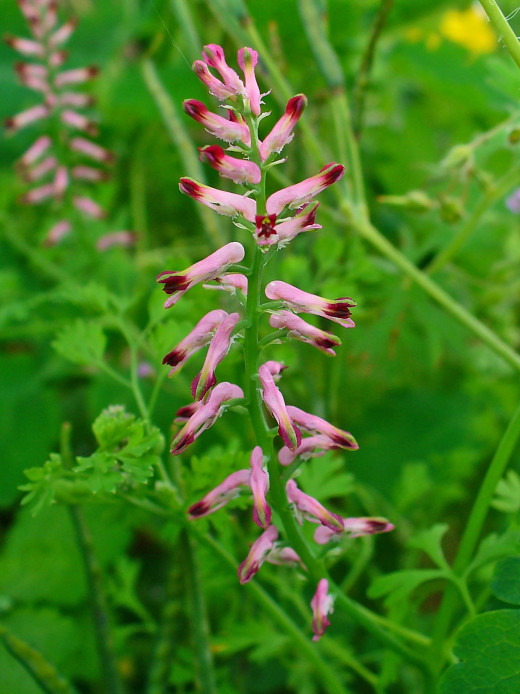 Fumitory Fumaria officinalis belongs to the Ranunculales and Papaveraceae and the sub family Fumarioideae. They are placed in the genus Fumaria. The common name and the genus name come from fumus indicating smoke. Pliny states that the juice of the plant causes a flow of tears as if it were smoke. The Latin fumus terrae meaning smoke of the earth alludes to the appearance of the foliage on a dewy morning, or some supposed peculiar smell.

Here we look at the species and its past and present medicinal uses. As always we commence with a description of the subject under review. 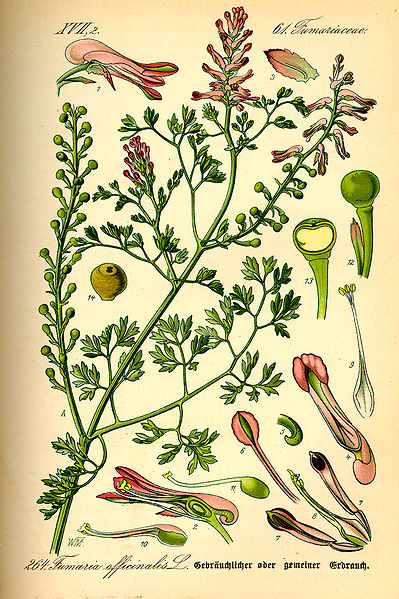 The root of this species is annual, slender,fusiform of a whitish colour which is somewhat fibrous.The stems that arise from the root system are slender, succulent, brittle, smooth, glacous, erect or somewhat spreading. The stems are much branched, acutely pentangular and from six to ten inches in length. { 15-25 cm}.

The leaves are arranged alternately , they are stalked and doubly or three times divided. They are smooth of a glacous or cinerous green colour. The lobes are simple, wedge shaped,cut with linear-oblong obtuse segments.

The flowers are produced in loose erect spikes, opposite the leaves , with a lance -shaped sharp bractea { small bracts} at the base of each stalk. The calyx {sepals etc} consists of two lanced shaped,acute,deeply toothed deciduous sepals. The corolla {petals etc} is oblong, irregular, of a light rose colour,spotted with purple at the summit, composed of four irregular petals, the upper one conate at the base and spurred below the middle, the lower one linear,free and greenish.The petals form a tube.

The filaments are combined in two 'bunches',each tipped with small roundish anthers. The fruit or seed capsule, is a small, smooth globose structure containing a single seed.

This species was once very common in cultivated fields and by roadsides in nearly the whole of Europe. It is said to have been introduced from Asia and Greece. It flowers throughout the summer.

Yellow corydalis Corydalis was once classed with the fumitories. 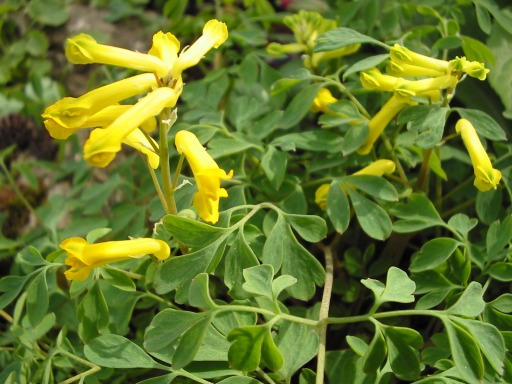 Grete herbale,{1516} was the first book on plants ever printed in England.The plant is there affirmed to be "engendered of a coarse fumosity rising from the earth". The book goes on to explain the name most popular in days gone by 'Fumus terrae' Smoke of the earth. " The gross, or coarse fumosity of the earth,windeth and wrieth about, and by working the air and sun is turned into this herb"

The smoke like smell it emits when bruised and with its exceedingly rapid growth it readily inclined minds to regard the plant as something not quite coming within the rules by which most ordinary plants are governed, and to represent it like a vapour was probably the dream of Alchymists. Gafford in Bayle's dictionary says Men are inclined to 'Poetise or Moralise'

Though little resembling the Poppy family in appearance the Fumariaceae are nearly allied to them and, as Sir J.E. Smithj observed 'English Flora' " This natural order appears to constitute an intermediate grade between the Papaveraceae {poppy family} and the Cruciferae, forming an interesting link in the natural system, and one what proves the excellence of the grounds on which it takes its stand. We have in the British Isles but four Fumarias, as the Corydali,which were so long confounded with them, have now been separated from the genus on account of the differences exhibited in the fruits. In Corydalis they are dihisent and ployspermors while in Fumaria they are indehiscent and one seeded;in other respects,however, no difference is discernable."

The largest of our fumitories Fumaria capreolata, which is distinguished by its broadly pinnate leaves as well as its more robust growth is frequently passed over as F.officinalis. F.parviflora, the leaves are reduced to almost threads {like those of Fennel}. F. micrantha {at that time} very rare and very local, make up the four known species of that time. 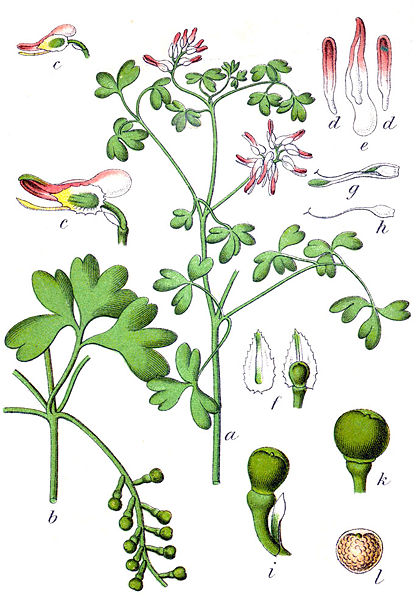 Dambourney,highly recommends Fumitory as a substitute for Dyer's Rocket, in dyeing. The palnt is said to be eaten by cows and sheep,goats dislike it and horses totally refuse it.

The odour of the bruised plant is herbaceous, the taste disagreeable and somewhat saline and bitter, augmented by drying. It yields its virtues to both water and spirits. The aqueous infusion is bitter, of a reddish colour and assumes a brownish black hue by the addition of Sulphate of iron. The watery extract is bitter, slightly pungent and saline. The spirit extract is simply bitter.

The ancients considered that Fumitory to be very efficacious in diseases of the eye. Dioscorides spoke also of its diuretic properties, and succeeding writers attributed to it such various and important properties, that if not exaggerated would constitute this plant one of the first therapuetical agents.

Galen, Actius, Aribasius, Serapion, Avicenna and Mesue, all employed it various obstructions such as cachexia {a general weakened body or mind resulting from and debilitating chronic disease} and chronic diseases of the liver.

Camerarius {Dissertatio de Fumaria page 12} ,Hoffman { Diss. de. Praest.remed.Domest page 30, printed 1718},Riviere { Obervat Cent 3 page 230} and Boerhaave, {Hist.Plant,page 338} all attribute to it the best effects in chronic affections of the viscera {relating to the intestines} , hypochondnasis and Scrofula { tuberculosis of the nymphetic glands formerly referred to as the King's evil}.

It has also been celebrated in the treatment of jaundice, Scorbutic complaints {scurvy} and blotches and eruptions of the skin of the worst character. Leidenfrost, highly recommended the expressed juice of Fumitory and Dandelion in obstinate cutaneous {skin} diseases. The British Flora Medica prescribes the expressed juice in the dose of two ounces twicea day, which proves to be laxative and diuretic,and acts at the same time as a tonic. It may be taken alone or mixed with whey,{ a watery liquid that separates from the curd when milk is clotted as in making cheese}. It was applied externally to foul ulcers and eruptions of the skin.

An extract was also made from the fresh juice, to was given in the form of pills, as well as a conserve and a syrup, which the latter was readily taken by children. A decoction of the dried plant was prepared in the following manner---

Take of Fumitory one handful. Dandelion root One ounce. Liquorice root half an ounce. Water one quart. These were boiled until one half was consumed and then strained. Of this a cupful was given as a dose.

It seems its value as an anti-scorbutic prepared from the juice was commonly sold in shops. Sir John Hill in his 'Herbal', recommended that the dried leaves of Fumitory to be smoked as a remedy for disorders of the head. Dr. Cullen at a much later date { A man that payed great attention to the qualities of native plants} recommended a decoction of Fumitory in affections of the liver. His recommendation may well have been based on the injunction of old Tusser,-

" Get water of fumitory, liver to cool,

John Clare too, in one of his pastoral poems writes a commentary on the lines of the plant.

John Clare too, in one of his pastoral poems writes a commentary on the lines of the plant.

And disposing to ye lepre"

Then he speaks of --

Which superstition, holds to fame;

When red and purple mottled flowers,

Are cropped by maids in weeding hours,

To boil in water, milk or whey,

For washes on a holiday,

To make their beauty fair and sleek,

And scare the tan from summer's cheek

The above information is for historical interest only and not meant as a guide to home made preparations.

Fumitory growing in grassland by the wayside. 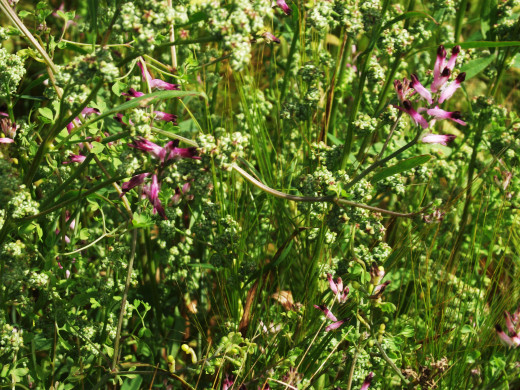 There is no toxic association with Fumitory, however, other members of this family have caused fatal outcomes. Because of the lack of positive testing the use of Fumitory should be avoided during pregnancy.

One modern herbal states that the whole flowering plant is harvested to be used for complaints such as Acne rosaceae, Acne vulgaris, Boils, psoriasis, constipation and gall stones. because of the bitter taste infusions are not suitable for the modern plate, but it is still employed in the form of a tincture. This tincture is taken for gall stones and a sluggish liver function. It can also be applied externally to eczema and other skin problems.

An infusion was also applied as a skin lotion.. Fifty grams {2 ounces} of the fresh herb or one ounce of the dried herb is infused in one paint of water. It should be left to infuse for ten to fifteen minutes. Strain and apply to the infected area with cotton wool. Use within thirty six hours and store in a refrigerator.

Fumitory tea as also been used as a tonic as it contains vitiamins which help to boost the immune system. However, one has to be very careful for too much of it can lead to side affects such as diarrhea. Commercial products are readily available in the form of teas,capsules or extracts.Fumitory should never be taken if you are on other medicines unless advised to do so by a professional herbalist or physician. 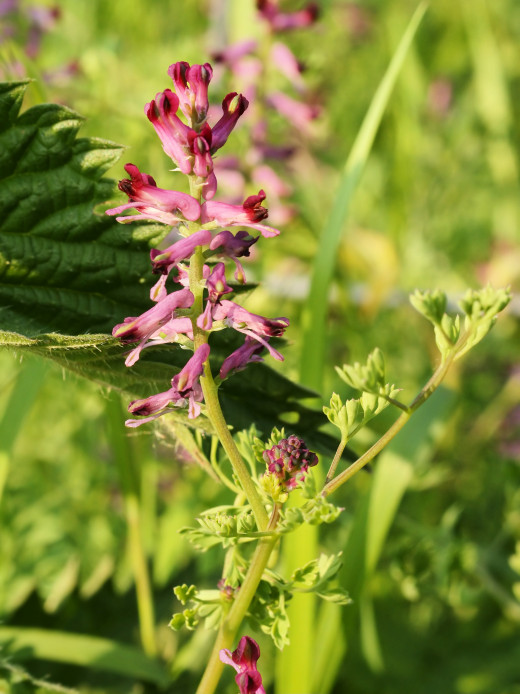 The images on this page may be reused however, the name of the relevant author must be attributed, along with any accompanying license.