The ruffe or pope are placed in the genus Gymnocephalus  in the order Perciformes and the family Percidae. They have been given the specific name of cernua.

It is a freshwater fish of the temperate regions of Europe and northern Asia and introduced into the Great Lakes of North America. They usually mature at the age of 2-3 years, however, in warmer waters they are capable of breeding in the first year. An individual female is capable of producing 100,000-200,000 eggs annually.

There follows an historical  account of the ruffe taken from eminent writers of angling during the 1800s. We begin with extracts from the book 'The Angler Naturalist {1863} where the author Mr. Pennel states---" The ruffe belongs to the second division of Perches, which have seven gill rays, but only one back- fin, and is closely allied to the common perch in appearance and general form., including their instincts and habits.

Like the latter fish, the ruffe is predatory and gregarious, being almost always found in company with others of its own or the perch species, and feeding voraciously on minnows, young fry, worms and aquatic insects. it also selects the same haunts and spawns about the same time of the year as the perch.

of the distinction between them the most marked is to be observed in the back fins, while although in both instances they are composed of spinous and partly of flexible rays, they are in the case of the ruffe united in the center, thus forming a single long fin slightly indented, whilst in the perch they form entirely distinct fins.

The peculiarity  of the double dorsal fins is confined among British freshwater fish exclusively to the perch, to the burbot and to the salmon family. It is singular that the ruffe, so nearly resembling the perch in most of its characteristics, should yet differ in one so marked as the nature of the water which it inhabits, while the perch lives indifferently  in streams and ponds, and apparently thrives equally well in both, the ruffe is never found, so far as I am aware, in any other than running water.

Although, however, a purely river fish, and considered as by no means unpalatable food, it is seldom sufficiently  numerous in this country to become an object of exclusive attention to the angler, but is usually taken incidentally whilst in pursuit of other fish, and more particularly whilst raking for gudgeon, the small larvae and other insects turned up during this operation possessing apparently an equal attraction for both species.

The ruffe,also, like the gudgeon is very easily tempted by a red worm, which, if offered in judicious proximity to his nose, he will rarely ever refuse.From its resemblance to the latter species in its colouring, and to the perch, as already pointed out , in its form and habits, the ruffe has been considered, by some authors, to be a hybrid between the two, -that is , to be produced from the ova of the one vivified by the milt of the other, for this opinion, however, there seems to be little foundation.

It has been remarked elsewhere that fish are capable , under certain circumstances, of exhibiting considerable attachment for others, and this is often seen in the case of fish kept for some time together in the same receptacle. When thus situated they are not unfrequently  found to attain a strong affection from one to the other, in so much that, if by any chance they are separated  they mope, or refuse food, and in some cases actually die of grief. An instance of this attachment in the ruffe species is mentioned  in the 'Philosophical transactions, Vol ix;-- " Two ruffes were placed by Mr. Anderson in a jar of water about Christmas, and in April he gave one of them away. The fish that remained was so affected  that it would not eat anything for three weeks, until fearing that it might pine to death, he sent it to the gentleman on whom he had bestowed its companion."

This, if the fish were of different sexes, may possibly have been  ' pining away love, and was truly lean' alluded to by Burton in his ' Anatomy of Melancholy'  but if the sexes are similar, then clearly it was the passion of friendship in its most platonic phase.

The first notice of the ruffe is attributed to Cuvier, to Dr. Caius, a contempory of Gesner, by whom it was published in his famous treatise ' De Piscibus'. It was christened by Dr.Caicus 'apredo' which is a translation of our name ruffe, or rough-a derivation easily accounted for by the hard unpleasant feel of  its scales.

In most rivers of the country and particularly the Thames and the Isis, it is found in greater or less numbers, and, though stated to be unknown in Spain, Italy and Greece, is an inhabitant of the more northern European latitudes                                Public domain Image. Wikicommons. 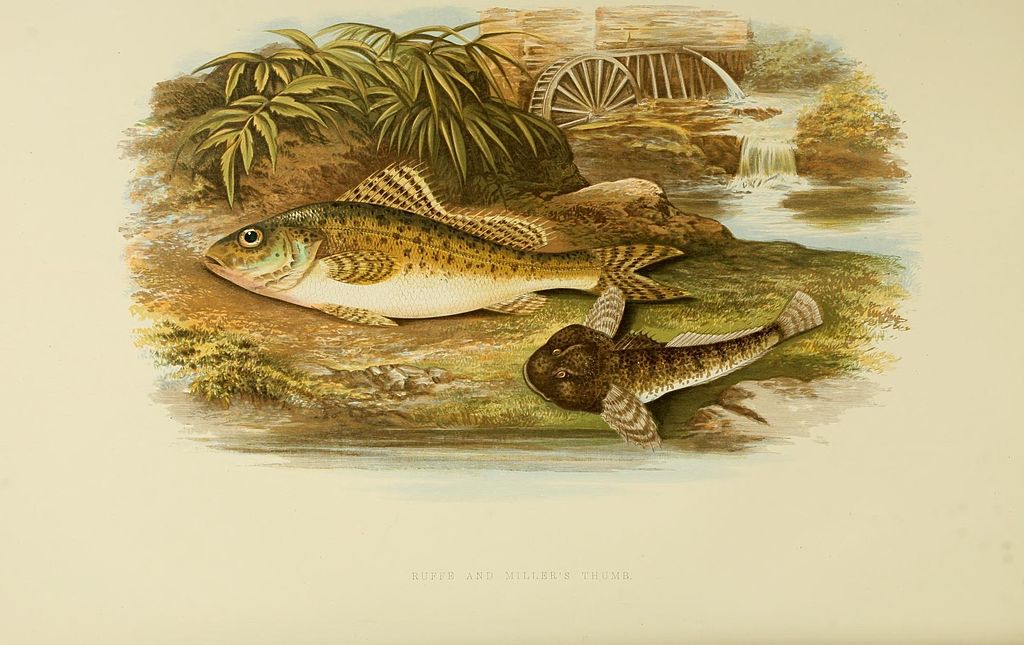 The length of the ruffe seldom exceeds four to five inches {10-12.5cm} , however, there are specimens of seven inches on record. The spawning season is in April. The eggs are deposited among the rushes and flags at the margin of the water, to which they stick from their glutinous nature.

The back fin which is one unit has an indentation at the junction of the spiny and flexible rays, the fore part being spinous and the hind part flexible. the teeth are very small, numerous and uniform, situated on jaws and front of vomer. There are no scales on the head. The fore gill cover notched, gill cover ending in a point.

We continue with the historical perceptions of the ruffe. In his Book the complete angler, Isaak Walton states--  " There is another fish called the a Pope and by some a Ruffe; a fish that is not known to be in some rivers; he is much like a perch for his shape, but will not grow to be bigger than a gudgeon; he is an excellent fish, no fish that swims is of a pleasanter taste, and is excellent to enter a young angler, for he is a greedy biter, and will usually lie, abundance of them together in one reserved place where the water runs deep and quietly. An easy angler, if he found where they lie, may catch forty of fifty , or sometimes twice as many, at a standing.

You must fish for him with a small red worm, and if you bait the ground with earth, it is excellent.                  Image from The Natural History of British Fishes. Public domain. 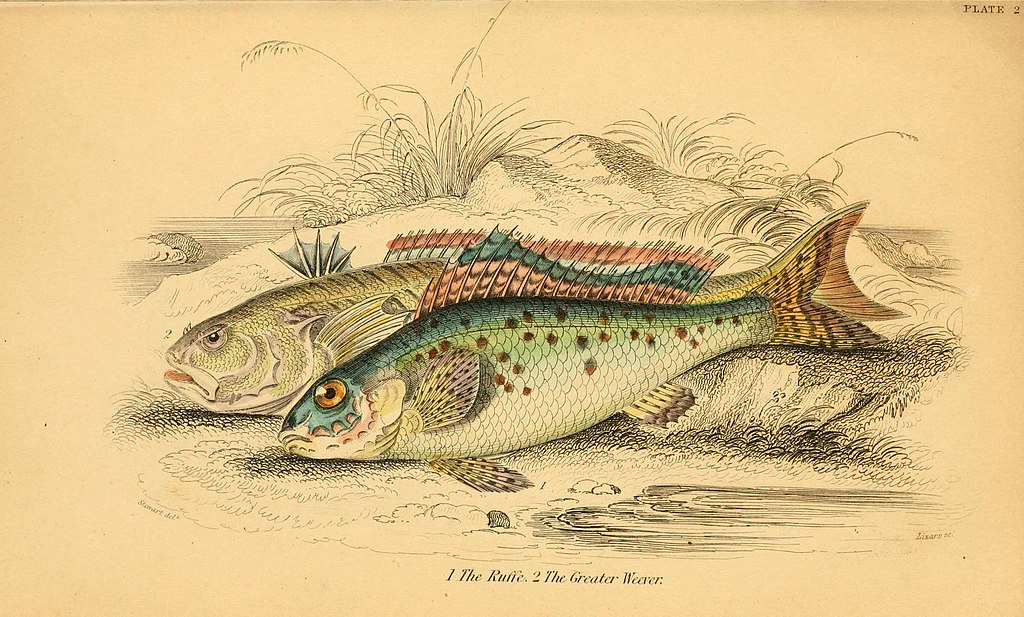 We conclude our historical perception with an extract from the book--Natural History of British Fishes 1891 in which the author Francis Buckland states---" the local names for the fish iclude jacj ruffe, pope,ruffe,and  tommy bar. this fish is well known in the River Thames, anglers often catch this fish when fishing for gudgeon. a cruel habit, which probably originated in some connection with Roman catholic persecution, is practiced up and down the Thames, and I believe almost all over England.

A wine cork is pressed tightly on to the spines of the dorsal fin, and the fish turned loose.; this is what is called 'plugging a pope'. there are I believe, a great number of these fish in the Yare and Wensum. Mr. Searle tells me that they are plentiful in canal cuts in Berkshire, where there is a gravelly bottom but not stream.

Mr.Eden, the attendant  at my fish museum, informs me that the Sheffield people, especially the artisans, are very great anglers, and that angling matches are often instituted for which prizes are offered---On these occasions a great many popes are caught and it is the invariable custom of anglers to carry bits of cork in their pocket, which they fix on the back spine of the fish, which they let loose again into the water both during and after the match. it is a very weird site to see the surface of the canal for so many miles covered by these unfortunate popes"

Courtesy of the USFWS