The family Scrophulariaceae,  contains about two hundred species of flowering plants that are collectively known as the Figworts. The species share the same characteristics, such as square stems, opposite leaves and open two-lipped flowers,which form clusters at the top of the stems.

The genus Scrophularia to which the figworts belong is found throughout the northern hemisphere, however, they are concentrated in Asia,with only a few species in Europe and North America. The name Scrophularia derives from scrofula a form of tuberculosis and alludes to the fact that many species have been utilized in herbal medicine to combat the disease.  Here we look at a selection of figworts commencing with the species Scrophularia nodosa, the Common figwort. 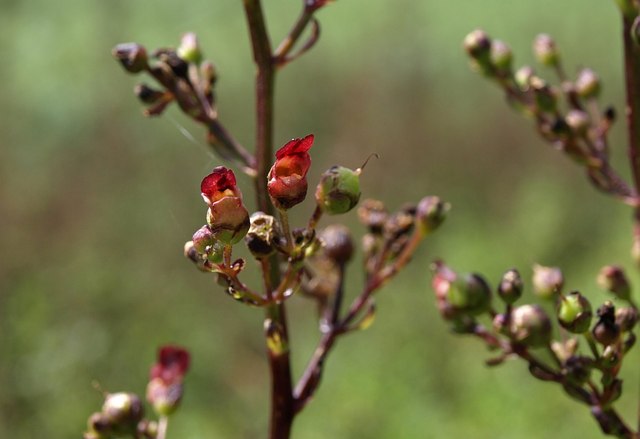 The common Figwort,often referred to as the woodland figwort, is a perennial herbaceous plant found in the temperate regions of the northern hemisphere, except western North America. It is a plant of moist and cultivated waste ground and open woodland.

From an horizontal root-stock it sends up an upright and sharply square stems up to five feet tall {150 cm }. The foliage is arranged in opposite pairs,ovate at the base becoming lanceolate at the tip. The leaves have toothed margins.

The flowers are arranged in loose cymes in oblong or pyramidal panicles. The individual flowers are small and globular . They consist of five green sepals encircling green or reddish petals. These are succeeded by egg-shaped seed capsules.

Medicinal uses.- Although they have a very unpleasant smell and taste they have long been used in herbal medicinal preparations, by both cultures in the east and the west. Culpeper in the 1600's named the plant throatwort and recommended the herb to treat scrofula tuberculosis of the lymphatic glands in the neck referred to at that time as the Kings evil.

The aerial parts and the root was used in a variety of preparations such as an infusion,decoction and ointments to treat a variety of ailments. Although beneficial in many ways they must be used with respect,especially when used internally. Any one with a heart condition or pregnant women should not use preparations from this species.  It should also ne noticed that an incorrect dosage can lead to vomiting and or diarrhea. in China the root of Chinese figwort Scrophularia ningpoensis, is used for the same herbal treatments.

This species must not be confused with Scrophularia umbrosa,the Green figwort, which also sometimes referred to as the Water figwort. The species under review here auriculata, is a perennial species of western Europe and also to North America. It is encountered at the margins of ponds ,rivers,and other damp situations.

This plant produces upright stems attaining the height of two and a half feet {70 cm } . The leaves are crenate and arranged in alternate pairs on the greenish-purple stems, they generally have two small lobes at the base. The flower stems are square and arise from the main stem in the angle of the leaf stalks.

The main stem has a wing running down each corner of the square, and these are more obvious than those of the closely related common Figwort {above}.  The flowers are small and globular of a reddish-brown colour. Each flower having two small lips above and below. They have five green sepals with a white margin,broader on this species than the previous one.

They flower from June-Setember. The flowers are succeeded by small roundish to pear-shaped capsules containing the seeds. The larvae of the Figwort Sawfly feed on the leaves.

Scrophularia lanceolata is a species often referred to as the Lance-leaved figwort,a native of North America,where it may be encountered in western and eastern Canada and throughout the United States with the exception of the south east.

The habitat of this species varies and includes disturbed areas and along roadsides. It has a perennial root-stock that produces a cluster of  erect spreading stems up to 1.5 meters long. The foliage ,as its common name suggests, is lance shaped and they are up to five and a half inches long  {14 cm },and borne on short stalks. Their margins are toothed and they are arranged in opposite pairs to each other along the stem.

The flowering,open panicle has several hairy branches bearing flowers that are roundish or urn-shaped,opening at the top into a narrow mouthed edge with hood-like lobes. The individual flowers are green and tinged with brown or dull pink. These are succeeded by a fruit capsule just under a centimeter long which contains many seeds.

All other flora that are featured on this site are grouped together in the content banners at the top of this page.

Flora via links. Click on the Links banner at the top of this page. Scroll down to relevant box click, this is a direct link to the articles, including the series Past and Present Medicinal uses.