" The hedger's toils oft scare the doves that browse

The chocolate berries on the ivy boughs;

Picking the berry from the hawthorn bush,

That come and go on winter's chilling wing,

And seem to have no sympathy with spring"

The Fieldfare, Turdus pilaris, belongs to the Passeriformes { perching birds} and belongs to the Thrush family within that order. Indeed the genus name of Turdus derives from the Latin name for a thrush while the specific name of pilaris derives from a word indicating hair. It is thought that there was a mistake made over the specific name. The Greek name for a thrush was trikas which was overlooked and the Greek trichos meaning hair was mistakenly used. Pilaris is the Latinised version of the latter name.

The bird breeds in north and central Eurasia in the main. In Europe there are no concerns for the Fieldfare. In Ireland there are no concerns and although it does not breed there it is a widespread winter visitor. However, here in the UK it is placed on the Red List of conservation concern because of declines in their population/distribution numbers, during the period 1969-2007. { The criteria for inclusion on the Red list is that there have been declines in population numbers/distribution, of over 50% in the last forty years or so }. It is a winter visitor to the UK, although there are one or two isolated breeding records the first from Orkney {Scotland} in 1967. There are now an estimated ten pairs breeding in Scotland.

The Gaelic name for the Fieldfare is Liath-thrusig, in Welsh Socan Eira and the Irish Sacan.

Here we review the bird, its lifestyle and breeding habits, along with historical notes from past ornithologists. As always we start with a description of the subject under review. 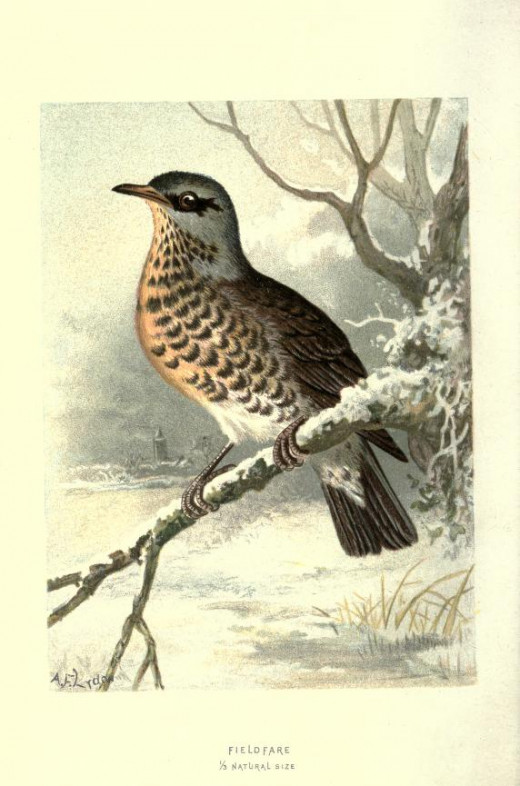 The plumage of this handsome bird is well marked. The iris is dark brown, the bill is of an orange colour as is the gape, with bristles at the base, and dark brown at the tip. between the bill and the eye there is a black mark, which passes under it in the shape of a semi circle. Over the eye is a streak of grey or buff.

The back on the upper part is a dark chestnut brown colour, shaded in the lower portion into bluish-grey, which is very conspicuous when in flight. The wings are brownish and the under coverts white. the tail is a deep greyish-black, long and the feathers even. The upper tail coverts are ash grey, under tail coverts white. The legs and toes are dusky brown the claws blackish brown. The female resembles the male.

They are approximately 26 cm {ten and a half inches} long with a wingspan of 40 cm {16 inches}, both sexes weigh 100 grams. In relation to its body size the wings are medium length the tail medium long, the neck short as are the bill and legs.

The flight of the Fieldfare is very characteristic in which the wings are closed at regular intervals for a perceptible time but without bounding. As the wings open and close the white under-wing appears to flash on and off, and in bright sunshine the bird may even seem to show as much white as the Jay. They hop on the ground.

The Fieldfare's blue-grey and chestnut plumage of the upper parts is distinctive at close range. In flight at any distance it closely resembles the Mistle thrush and is then best told by its distinctive flight note a chuckling, 'chuck,chuck'.

They are one of the most beautiful thrushes in the world, and there is no finer sight than to see them newly arrived flock settling on a tree as they arrive on our eastern shores, sitting on a leafless tree outlined against the sky. This said they are by nature wary birds, and much harder to observe than other members of the thrush family. They are much more likely to be encountered during severe weather when they are compelled to visit parks and gardens, even in the middle of towns, as they search out the berries

Other members of the thrush family. 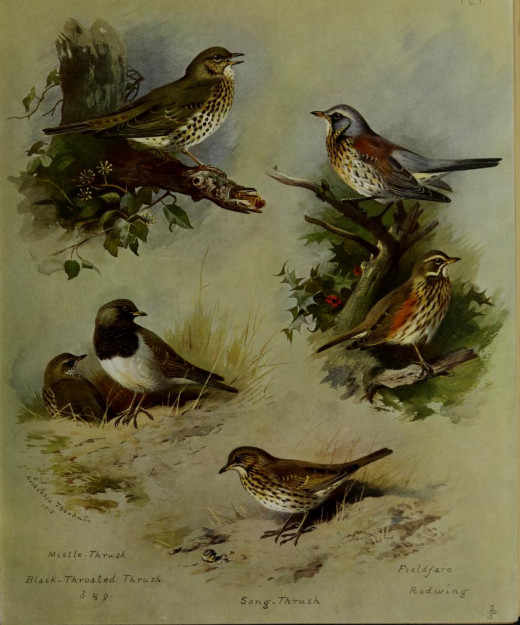 Courtesy of the BHL.

Here in the UK, the arrival of the Fieldfare heralds the approach of winter as surely as the swallow heralds the start of summer. They migrate in the main during the night and they fly at a great height, usually on a north or north easterly wind. They tend to arrive a little later than other UK winter visitors, usually around the middle of October or the beginning on November.

Dixon writes " Whilst out on the mud flats wild fowl shooting, their peculiar harsh and startling cries were heard as the great tide of migration continued, unimpeded by  darkness, across the gloomy sky above"

On arrival it seeks out isolated woods and pastures to shrubberies. However, they will also visit well cultivated districts, seeking their food in tall hedges. as long as the weather is favourable they tend to shun mans dwellings almost entirely.

The Fieldfare is gregarious in its habits. It generally associates in parties of twenty to forty birds, and at times these parties may be in close proximity to each other giving the impression of a large flock. Conversely it is not uncommon to see an isolated bird or two feeding with other members of the thrush tribe.

Long before you can approach them they will probably take to the wing in a straggling train, often scattering the snow in showers from the twigs and their harsh notes ringing out on the frosty air. From tree to tree they will fly before you always within a safe distance. Should they still feel threatened they will take to the air in a widely scattered flock, taking themselves off into the distance.

When the bird settles on the ground its movements are very characteristic. The tail is a little depressed, the wings droop a little, and the head is held well up. Then the birds gives a series of short hops, picks up a seed or grub, pauses for a moment, then hops on rapidly once more. When feeding in this way they tend to go in one direction only, not wandering around in all directions as usually is the case. I have noticed also that when one or two birds fall to the rear, they soon take a short flight and join the rest of their comrades 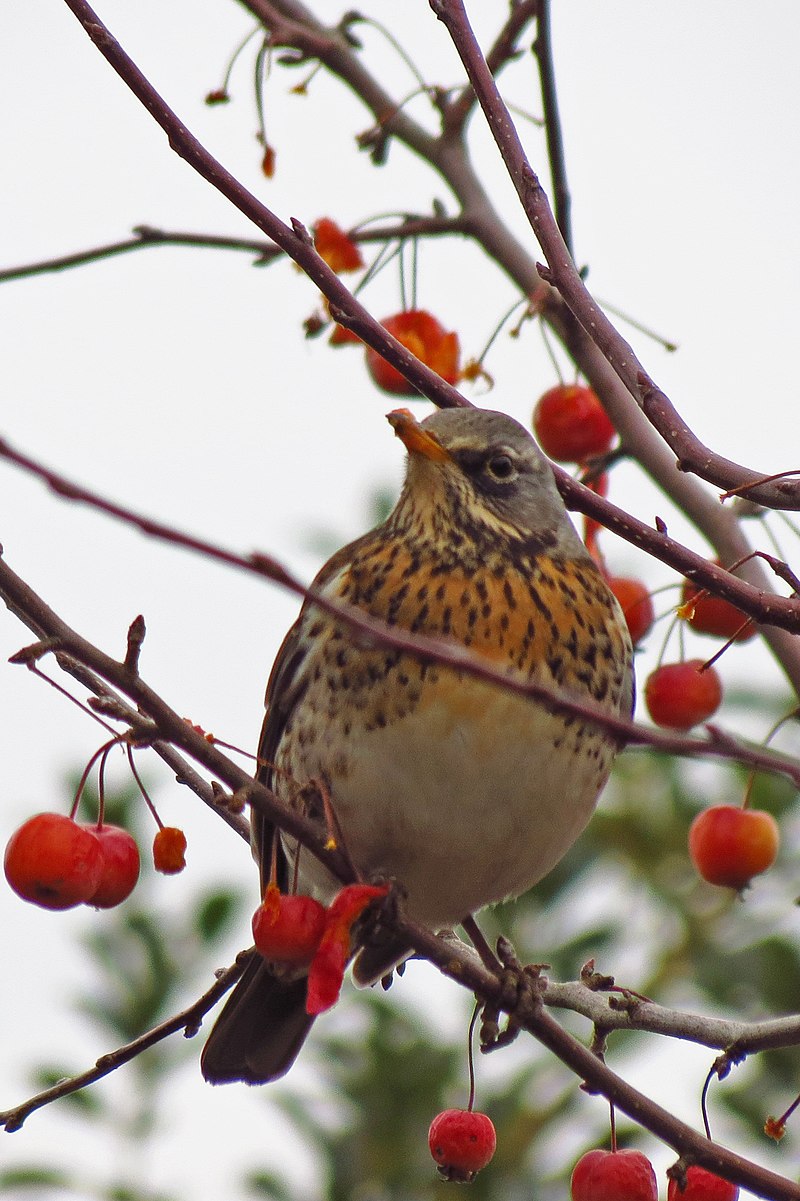 The diet of the fieldfare consists of worms and insects during the summer months and from small wild berries during the winter months. In the UK the berries of the rowan tree and hawthorn are favoured along with the seeds of grasses and grain. They will also eat snails when these can be procured. 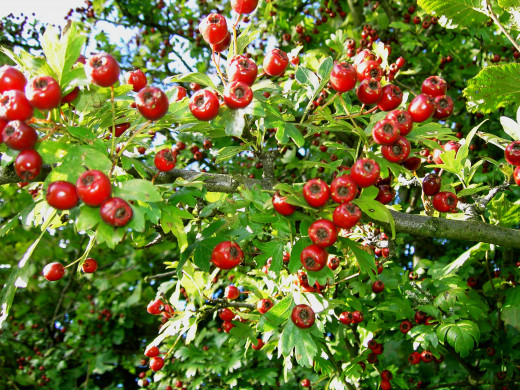 As a Cage bird Historical notes.

According to Butler, as a cage bird the fieldfare it is most uninteresting.

"They soon become tame, and if allowed to bathe ,keep their plumage in beautiful condition, but, excepting for show purposes, they are only an expense. Like all thrushes he is a large eater and therefore needs frequent attention. I parted with mine when I sold my Redwings and have never wished to keep another.

I fed him on the same food as my other insectivorous species, adding a few worms, snails, caterpillars and, berries when obtainable. he was always in perfect health, even when moulting, and never showed restlessness at the seasons of migration. In fact, he was one of the steadiest and most apathetic birds I have ever possessed.

The nesting operations of the fieldfare is a special event, building in colonies and according to historical writings " more than two hundred nests have been found within a small circuit of forest"

As is the case with rooks and some other birds they return to the same site season after season to breed. It was said that in Siberia, in the bare tundra, they select a site under a cliff of bank similar to the locations chosen by ring ouzels.

The nest is constructed of dried grass, twigs and sticks, cemented by clay, and lined with fine grasses. they are generally placed in a pine or other conifer tree at various heights from the ground. the eggs vary in number from 5-6 and are of a pale bluish-green colour, with spots of dark reddish-brown. They are incubated by the female for about 11-14 days and the chicks are born blind and helpless.

The young are fed on a rich diet of worms, insects, beetles, in fact any small living thing they can capture. They are most bold in defense of their young ,flying noisily around the intruders head uttering their alarm note loudly. When the young leave the nest { in about a further 12-16 days} they join the company of others of a similar age, and wanders about the woods feeding on insects or any fruit they can find.

The adults will make the most of the short summer and commence to bring up a second brood. When going to roost in some thick hedge or tall tree they arrive with much 'chacking'. They may be in company of Mistle thrushes and share the top most branches with them, while the redwings tend to keep to the thick lower growth below.

Here in the UK the birds tend to remain with us until April, although there are records of them remaining until May, before they return to their breeding sites in Scandinavia.

UK- Red List-Priority species due to declines in population/distribution of over 50% in the last fifty years or so.