The falcon tribe of the family Falconidae have characters that are both striking and well defined. These characteristics are that the head and neck are feathered. The eye is shaded by a projection above, which gives this family of birds the appearance of keenness as well as intelligence of expression to the eye, which itself is very bright and alert. 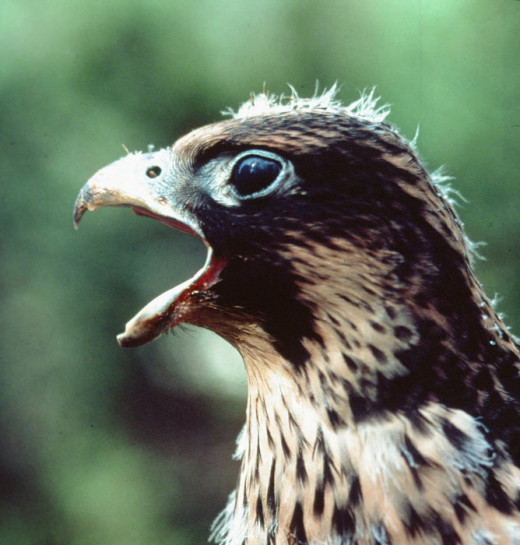 The cere of the bill is generally coloured and the basal portion of it is adorned with short stiff hair-like feathers. Both mandibles are, in general, hooked throughout their whole length. These mandibles are very strong the upper one pointed at the tip. The lower one in slightly rounded and the cutting edges are armed with a tooth, or notch, more or less perfect. The whole structure of the bill indicates a capacity of rending substances in a more recent state than the carrion beaks of the Vultures. The nostrils are pierced in the cere, open and rounded or oval in their outline.

The tarsi { The shank of the leg } are stout and of a moderate length and covered by feathers or hard by hard scales. The outer toe of the foot is often united to the middle one, with a membrane at the base. The inner toe is free. the claws are typically pointed and sharp and very capable of movement. They are somewhat retractable, when the bird is at rest, but not into sheaths. This retraction is enabled by an elastic-like tendon and helps the bird to keep its claws injury free when they land upon sharp points. The claws are not used in feeding.

The Peregrine is a typical falcon 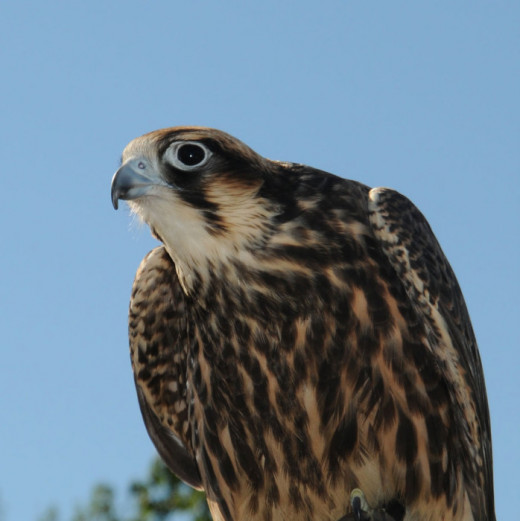 In many of the species there is a considerable difference between the plumage of the young and mature birds. This often leads to confusion where identification is concerned. The same problem often arises from the differences in male and female birds of the same species. The female is by far the more powerful bird, often up to a third heavier than the male. She is strong , bold and fierce in proportion.

The principle differences in the plumage are, the young have the colours more broken and mottled than the mature birds and tend to have the hues of the female, rather than the male, usually inclining towards brown.

Falcons are very strong and carry an animal nearly as heavy as themselves for many miles. They prefer the prey which they kill, which are mostly warm blooded animals, birds or small mammals. However, some species also eat fish, reptiles and even beetles. They are not cruel birds and do not torture their prey like the vultures are inclined to do. they are quiet birds and seldom seen out and about unless in search for food. The nest in lofty inaccessible places and more rarely in trees or on the ground.

They eject by mouth the bones and other indigestible food. This ejectment is in the form of small globular castings or pellets that were formerly known as quids. They inhabit most parts of the world. The larger species are often only encountered in wild places. The more bold in nature are usually dwellers of cold latitudes rather than in the warm or even temperate ones. 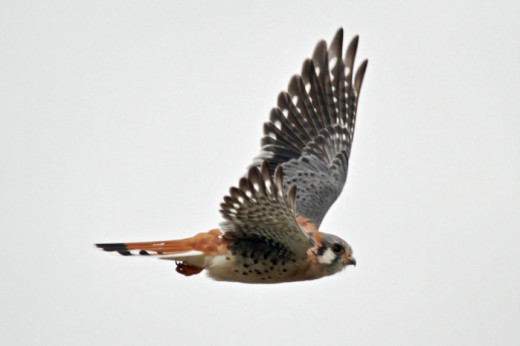 Here we review a member of the falcon tribe the European Kestrel Falco tinnulus from the Latin falcis meaning a sickle a reference to the hooked talons and tinnulus indicating shrill {sounding}.

This one of the UK's most observable member of this tribe.it is often seen hovering over motorway verges and other areas of rough grassland, The plumage is of a rufous chestnut. The male has a blue grey head and tail with a black band at the end of the tail which is fanned whilst it is hovering. All have mantle spotted and under parts streaked black or blackish. The bill is hooked with a bluish horn colour. The cere is yellow as are the legs and skin around the eye. 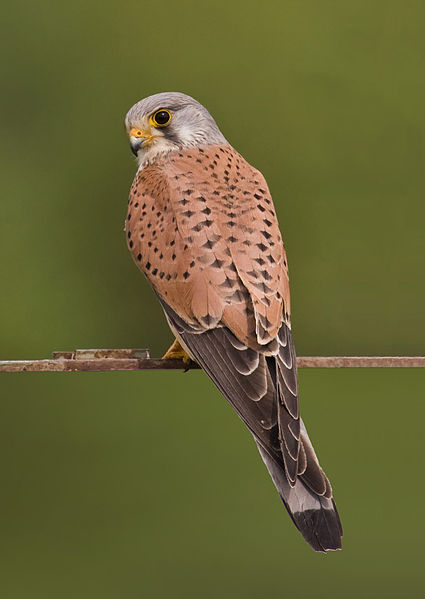 The European Kestrel has a rapid flight, also soars and habitually hovers followed by a pounce they are 34 cm long with a wingspan of 76cm. The male weighs 190 g the female 220 g. They are distributed across Eurasia and Africa. In the UK it may be encountered over open grassland, heath land, farm land and even towns, where they prey on small mammals such as the field vole and insects. In warmer regions they will also take lizards.

The female lays 4-5 eggs often just on a ledge or a hole in a tree or in the nest of a large bird that has been vacated by the previous tenant. They some times take to nest boxes that are specially designed for such birds.

The eggs are roundish in shape and closely mottles with dull red blotches on a yellowish white background. The spots may vary in amount and in some cases the red and background colour are of equal amounts, although a general red affect is more usual.

They are incubated for 28-29 days by the female occasionally relieved by the male. They fledge at 32-37 days. they raise one brood per season. The young are ready for breeding themselves at one year old.

Kestrel in its familiar poise of hovering. 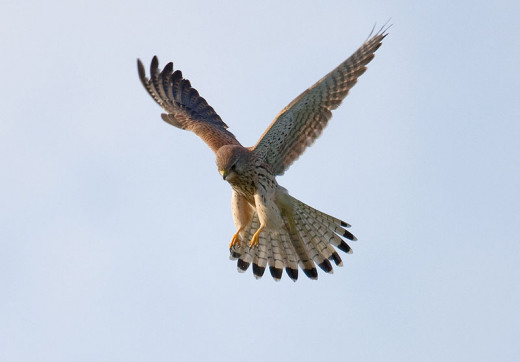 Here in the UK kestrels have been placed on the Amber list of Conservation Concern. Chiefly because it is a bird of European concern.

Explaining the Basic criteria for Conservation Listing in the UK.-----

The Green List ---Population numbers are stable or have increased since 1996.

The Amber list---There has been a decline in population/distribution of between 25-50% since 1996.

The Red List--- There has been a decline in population/distribution of over 50% since 1996. Any animal that appears on this list is subject to a Species Action Plan {SAP} being formulated and implemented on the creatures behalf. The SAP which comes under the UK Biodiversity Action Plan is hoped to halt and eventually reverse the decline of that creature.{ or plant} . These plans are implemented on a local level and involve many conservation organisations.

The images on this page may reused. However, the name of the relevant author must be attributed along with any accompanying license.