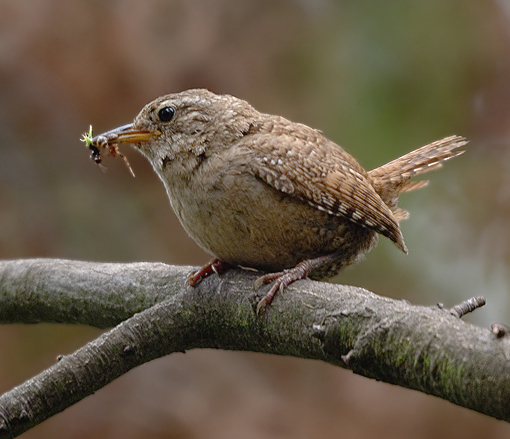 The European Wren Troglodytes troglodytes, belongs to the Passeriformes order of birds { perching birds}, and the family Troglodytidae.

They were first described by Linnaeus in 1758. A group of Wrens have many collective nouns,including, a chime,flight,flock,and herd of Wrens. it is related to the Goldcrest, Tree creeper and Dunnock. The genus name derives from Trogle-a hol + dules a diver, alluding to the creatures skulking habit. others translate the words to mean -Cave dweller.

In North America the Wren is represented by species such as the Bewick's Wren, Carolina Wren and the House Wren.

Here we look at the lifestyle, and breeding habits of this dapper little bird, along with historical observations and noted from past ornithologists and other eminent writers. as always we commence with a description of the subject under review.

American species are represented by birds such as the Carolina Wren. 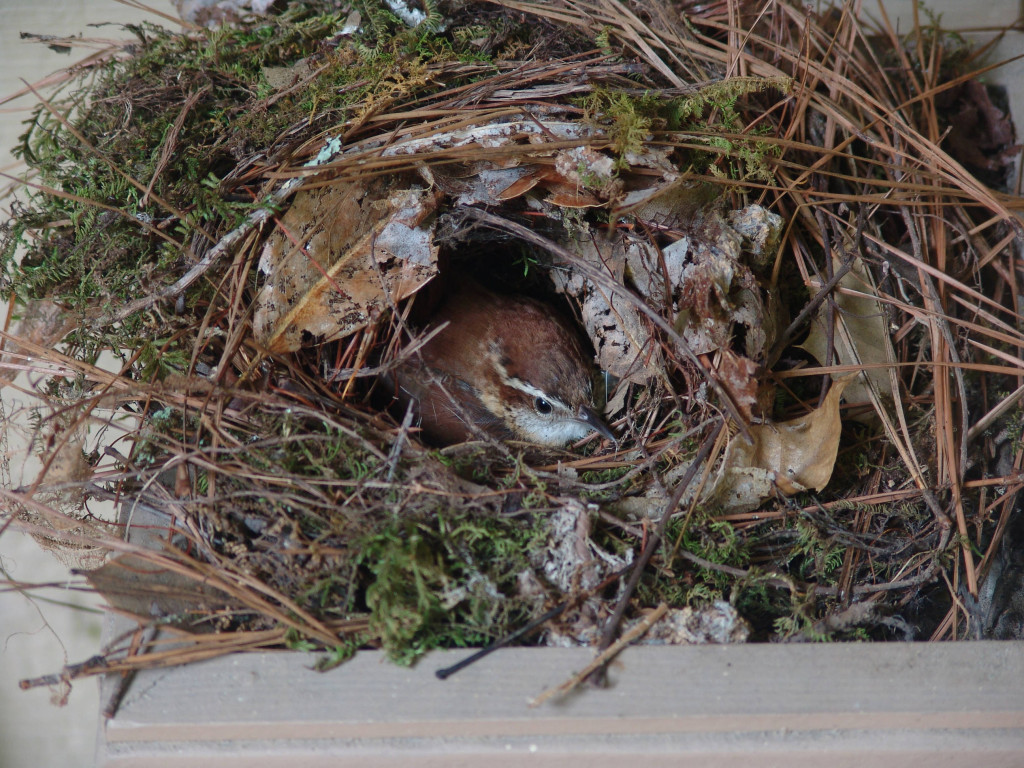 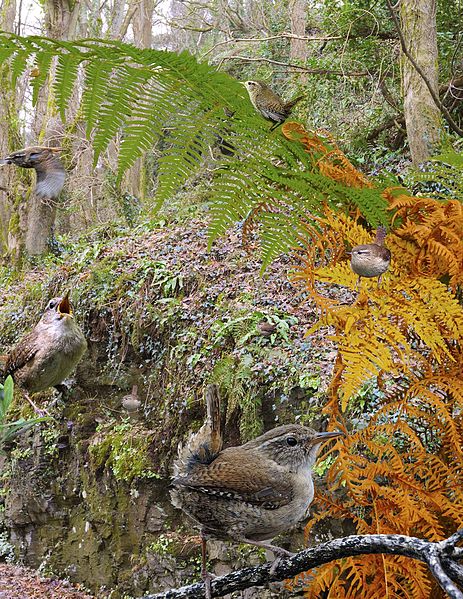 The adult male has the upper plumage a rich rufous brown, the crown and nape appearing slightly darker and barred darker with a deeper brown, the primaries brighter,new outer webs barred with a pale buff colour. A pale white streak over the eye.

The under surface pale brownish, more rufous and darker on the flanks,belly and under tail coverts, which are also barred with smoky brown.

The bill is dark brown above, paler below. The feet and legs pale brown. The iris is dark brown. the female is slightly smaller,slightly duller, but are almost impossible to tell apart in the field. In relation to its body size the wing length is very short, the tail medium-short, the neck short, bill short and the legs medium-short. The female is very similar and the sexes are impossible to tell apart in the field.

The flight of the wren is whirring. on the ground it hops. Often creeps among undergrowth like a mouse,almost always have the tail cocked up. The usual call note is an irritable 'tic,tic,tic'. The song is an enthusiastic ,clear warbling song

Diet of the wren

The wren survives on insects and their larvae,along with spiders. {in winter spiders probably make up the greater part of its diet}. The wren seems to especially gifted with the power of self preservation. It will pluck spiders and larvae from their hiding places, catch flies and other insects that feed around puddles,especially so in farm yards. It seems this little feathered mite is capable of adapting to any circumstances. They rarely visit bird tables.

Because of the reliance on insects, harsh and prolonged winters can decimate population numbers. However, because of their high breeding rate they soon recover their losses.

Illustration of the wren 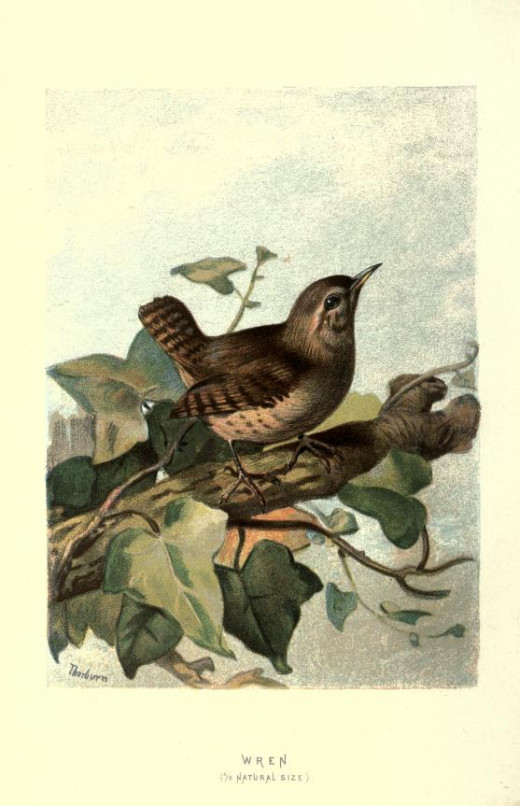 It was sometime before Ornithologists could assign this popular little bird a proper position in ornithological classification.The Wren was originally placed among the warblers, but for various reasons this bird is now placed with the Troglodytes as having more in common with that class than the Sylvidae.

Equally in days gone by, along with the Robin and Swallow, the bird has enjoyed an amount of protection almost certainly through superstition, so it is not surprising that this cheerful little bird, whose whole diet consists of insects and the their larvae, and that stays with us through the winter,cheering us with his merry little song,should hold a prominent place in the hearts of man.

However, according to Butler {1800's}, " Contrary to this popularity this little bird suffered in certain localities at the hands of the irrepressible schoolboy. Noticing that Wrens naturally kept to the the shelter of hedgerows and seldom venture upon any lengthened flight, these boys armed with sticks and stones, would beat on either side of the hedge until poor Jenny Wren was killed. This depressing practice was also carried out in Ireland."

Butler was referring to the legend from which the practice derived. The anger was directed towards this harmless little bird, through the anger felt by the Catholic Irish at a wren for saving from a surprise massacre, by tapping on a drum, a small party of worn out Protestants. It is strange however, that this same legend in southern Ireland occasioned a ceremony in which a Wren was carried about in honour , to the accompaniment of this ditty--

was caught St.Stephen's day in the furze,

Then , pray,kind gentlefolks give him a treat"

Alluding to the first line of the poem "the king of all birds", legend states that the birds once held an election for a new king. It was decided that the bird that could fly the highest would be the chosen king of the birds. The Wren hid in the feathers of the mighty eagle,who rose much higher than any other bird. When the eagle was exhausted , the Wren took off and flew above him,in an attempt to gain the title. because the Wren had cheated, the other birds banished him to skulk in the under growth, where it and its kind would remain for evermore!

Too much praise can scarcely be awarded to the song of this tiny bird. Considering its size it is possessed with a great power and sweetness, and is repeated again and again even undr adverse circumstances. In common with the Robin, the song continues throughout the winter and even when their is snow on the ground their beautiful warbling song may be heard,proceeding from the shelter of a bush or hedgerow. When the ren renders this beautiful warble it is delivered with so much energy that the whole of the birds body trembles with the effort. According to science, per unit of weight , this bird delivers its song with ten times more power than a crowing rooster.

During the winter these little birds roost in holes in houses, trees,walls, thatch or any shelter position they encounter. They huddle together, and so resist the rigors of our climate.. It is a familiar sight , hopping around the garden checking every nook and cranny, every flower and shrub in its quest for insect food. The Wren is the second smallest bird to occur in the UK after the Goldcrest. Although bold and fearless during the winter months, the Wren is more frequently heard than seen during the summer months,when its habit is to keep to the undergrowth uttering the warble or 'tic'tic'tic, note has it drops from twig to twig.

The wren in captivity -historical notes

There is on record an ornithologist who states that on the 31st September 1887,he caught a Wren in his large Thrush trap {catching birds was quite legal at that time }. It was placed in a Linnet cage and immediately escaped through the wires into his greenhouse, " Where it was nimble in dodging us, that a full hour elapsed before it could be caught and placed in a large cage. In the evening I found it asleep clinging to the wire netting, and in the morning it was dead"

Two or three years later Butler caught one and turned it loose into an aviary of sixteen feet long, where it seemed 'perfectly at home' at once, behaving quite naturally, showing no alarm whatsoever, but examining the rock work most diligently, and extracting spiders from the various holes and crevices. " Unhappily I could not persuade the bird to eat anything but living insects,woodlice and spiders,it could find. If none were available it simply starved to death. The author somewhat piously concludes " My experience has led me to say -if you keep wrens as pets, it is safer to rear them from the nest"

Illustration of wren with her young. 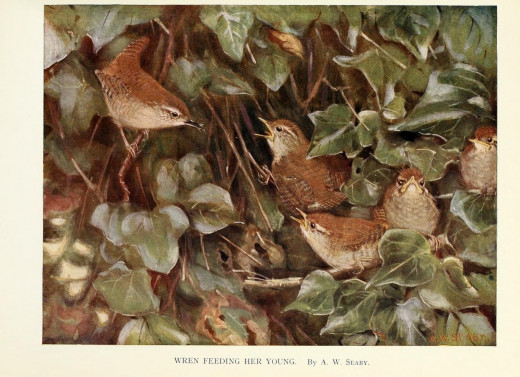 It was once thought that the pair took part in building the nest,but studies have shown that it is in fact the male bird that takes on the task of nest building. The male will build up to five nests in his territory. Once this task is completed, these neat abodes are shown to a female .She will choose one in which to deposit her eggs. She will probably line the nest and make minor alterations so that she his happy with the place in which she will rear her young.

Once she has laid her eggs ,he is off to find another female who will be shown other vacant nests,again she will choose one in which to lay her eggs. It is even probable that a third female will be chosen by this dapper little male, who has no part in rearing the young of any of the nests.

The nest itself is dome shaped with an opening at the side, and, is composed of various materials,principally small twigs, roots, leaves,moss and feathers. the nest is located in equally various positions. They may be situated in the fork of a tree, under a thatch of a building, the fork of cabbage plants that have run to seed. They may choose overhanging roots of a tree near a stream, the suckers that abound at the base of a lime tree, among ivy, among several other localities.

Wherever the site chosen the nest will be positioned where it is difficult to detect and it will blend in perfectly with the surroundings.

The female will deposit five to six eggs,which are white ,speckled with a few red spots, on the feather lining of her nest. She will incubate the eggs for 16-18 days. When the chicks hatch they are blind naked and helpless. They are fed on a diet of insects,flies,larvae and small worms until they are strong enough to leave the nest. This will be about 18 days after hatching. 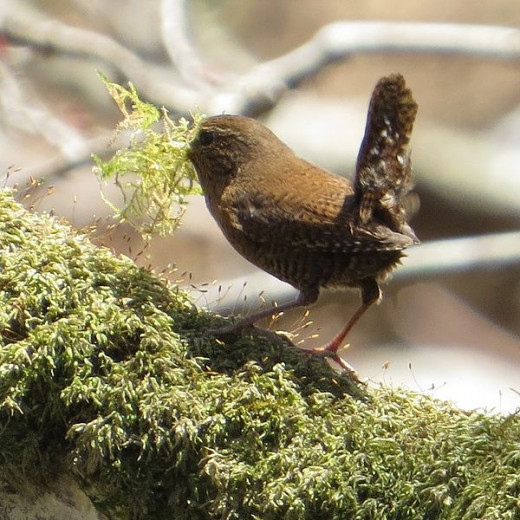