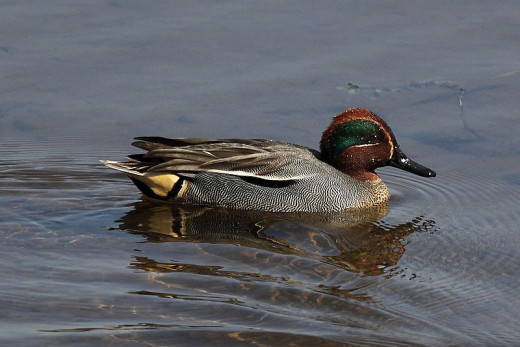 The European teal Anas crecca belongs to the order of birds known as the Anseriformes and placed in the family Anatidae. Anas the generic name derives from the latin Anas=duck and the specific name of crecca derives from the Swedish name for the teal kricka.

The European teal breeds in northern and central Eurasia. They inhabit Lakes , Marshes Pondsand shallow Streams. They feed mostly at night in shallow water. They are collectively referred to as a 'Spring of teal' on account of the way they take off almost vertically.

The Gaelic name for the bird is Lach-bheag, the Welsh Corhwyaden and the Irish Praslacha-the above information is courtesy of the BTO.

Here we review the species, its lifestyle and habits, as always we commence with a description of the subject under revie 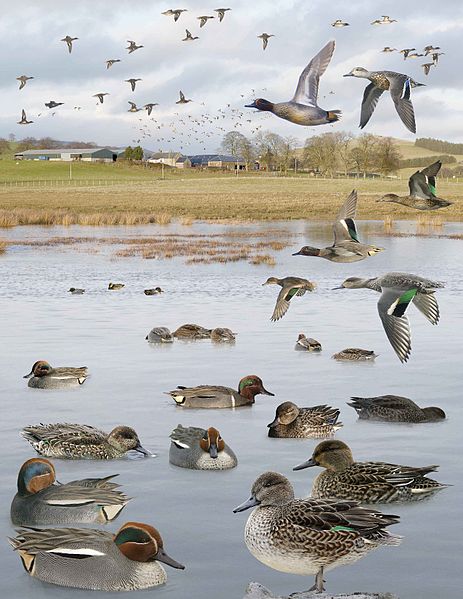 The male has a chestnut coloured head with a broad green stripe from the eye to the nape bordered with cream, vermiculatal grey upper parts and the flanks with an horizontal white line on back above the wing. { The drake American green winged teal has a vertical white mark at side of breast in front of the wing instead of this line}. The breast is speckled and there are buff patches next to black under tail coverts.

The duck {female} and eclipse drake and juvenile are brown streaked darker. All have a green and black speculum and all except juvenile have a whitish belly.

The drake {male} in full breeding attire is a remarkably handsome bird with contrasting colours and exquisitely penciled plumage.

The bill of adult the juvenile tends to be pinkish. The legs are a greyish colour. In relation to their body size the wings are medium long, the tail short, neck medium length, the bill medium short, the legs very short.

In July the male gradually acquires the 'eclipse' plumage, which resembles that of the female, and they are generally later than other ducks in acquiring the new feathers of the autumn moult. many ornithologists believe that their plumage is at its finest during the months of January.

The movement of the teal is similar to the Mallard but the flight is much quicker,after an almost vertical take off. Flocks can perform fast collective agile,aerial movements some what similar to those performed by waders. This is our {UK} smallest native duck, its size distinguishing it at once from all others with the exception of the Garganey, and no other duck has the green and chestnut patterning. The drake green winged teal can be distinguished by difference indicated above. However, the females are impossible to tell apart in the field with these two species.

The birds are very gregarious and especially fond of flying in compact flocks at high speed. They consort regularly with other species of surface feeding ducks especially the Mallard 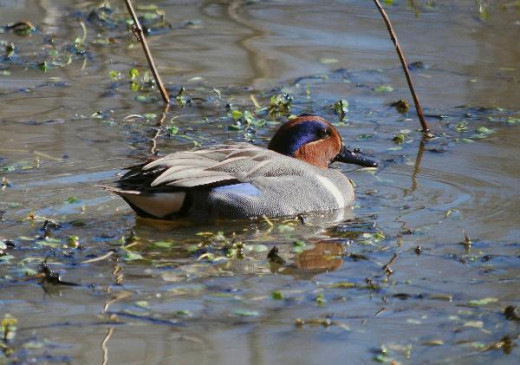 I must confess that this species is one of my favourite ducks. Unlike the mallard that can become very tame the on local waters,where they are regularly fed, the teal always has a wildness about it. Always wary,always ready to take to the wing at the slightest intrusion,when on waters in quiet situations,particularly those in wooded localities. it flies ,however, but a short distance and once again splashed down suddenly in a place where it feels more secure.

Mr. Thompson c1850 states that the small flocks of 40-50 usually appear in Belfasy bay { Northern Ireland} from August to November;when they retire inland; and if the frost is so severe as to freeze over inland waters, they again appear in the Bay in January and February,often in flocks of 400-500.

When not disturbed the teal is probably less shy and probably one of the wildest of our native ducks. At morning and in evening twilight the teal may be encountered feeding in stubble fields, ditches and marshy places. Their food consists of vegetable matter, such as grasses and stems of various water plants and a small proportion of insects, They eat sand and gravel to aid digestion.

Here in the north west of England there are records of the teal being a common breeder in the county of Cheshire and were considered to be very common in the Mersey estuary. However, this does not seem to have lasted. T.A.Coward in his book ' Birds of Cheshire' 1907 staes " owing to the reclamation of the marshes and the cultivation of Mosses, suitable nesting places are now becoming rare, but the bird still breeds at Bagmere, Brookhouse Moss and elsewhere in the district between Sandbach and Somerford. teal bred regularly at the Duckwood at Eaton until 1894. Mr. R. Newstead informs us that in the spring of 1895, owing to increased drainage, the birds did not remain to nest."

The teal was once esteemed as an article of food and readily found a sale in the markets. Records show at the decoy of Ashby in north Linconshire { east England} 44,568 were taken in thirty five years, and of these as many as 3,279 in the winter of 1852-53.

Mr. Southwell , { Stevenson's Birds of Norfolk}, mentions the fact that the famous 'decoy-man' Skelton, took in six consecutive days, in Winterton decoy 1,010, and at the same place he took 200 at once in a single pipe.

Butler ' British Birds with their Nest and Eggs' 1896-98, says that " On the east coast of England the teal used formerly to be very regular in its appearance arriving in small companies from the middle of August and throughout September. I have known them in some numbers as early as the second week in July. These first arrivals may perhaps be preferable to home bred birds, the great body of foreigners coming late in October or early November. When the teal , and some remark will apply to the Wigeon and Mallard, first come from the sea they are very rufous on the under parts; our wildfowl shooters attribute this to the influence of salt water, remarking that in fresh water the stains speedily disappear. it is more probable that the sea has nothing to do with the colour,which is caused by peat staining, or perhaps the presence of oxide of iron in the water of their summer quarters. These rufous stained birds are always in fine condition and to be preferred for the table. 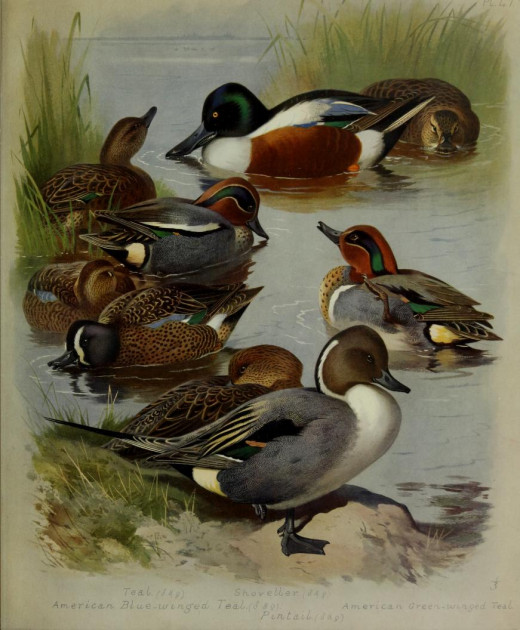 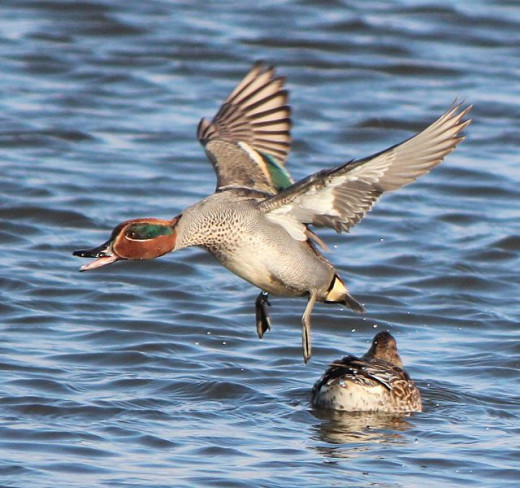 The nest of the teal is usually placed among reeds or coarse herbage near the edges of lakes and marshes,however, in common with many other ducks the nest is sometimes situated at a substantial distance away from water, even among gorse and heather. It is constructed with a considerable amount of herbage and is lined with down and feathers.

The female will deposit 8-11 eggs and she incubate them for between 21-33 days. the young leave the nest soon after hatching.When the young are newly hatched they are covered with a dark coloured down. However, in a about a month the plumage becomes like that of the female.Young male birds do not attain their colourful plumage until the middle of the following winter.

Both parents show great affection and attachment to their young brood. The female will stumble and flutter close to the feet of an intruder in an attempt to draw away the intruder fro her young treasures. It is a ploy that seems to achieve the desired affect most of the time. The young birds are thought to dive but adults never seem to do so.

As previously mentioned the nest is sometimes placed at a great distance from the water. This fact is clearly illustrated by this passage from C.St.John's book ' Tour of Sutherland'-{ Scotland} he states " As we were driving the other day, a teal came fluttering out of a dry ditch by the roadside , and for about a hundred yards continued fluttering and running under the horse's feet. I found that she had a number of young ones unable to get over the wall, so we helped them into the adjoining wood. They were a long distance from the water, and had very rough ground to get over to reach it."

" i remember exactly a similar circumstance happening to me in Perthshire, when I also saved the lives of a young brood of teal by giving them a helping hand. These instances, prove,notwithstanding, the instinct of the birds, which generally enable them to keep their young out of harms way, they occasionally get them into a situation, not only of difficulty, but where any dog or mischievous boy coming along might destroy the whole brood" 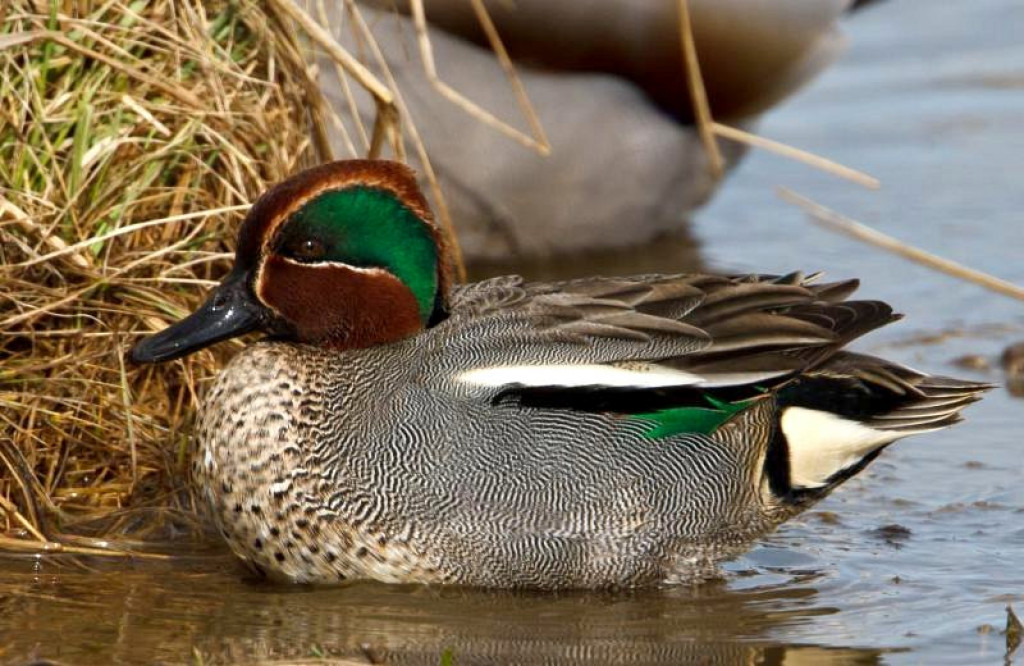 UK-Listed as Amber due to declines of over 25% in population/distribution over the last forty years or so.

The images on this page may be reused. However, the name of the relevant author must be attributed along with any accompanying license.
Thank you for visiting.