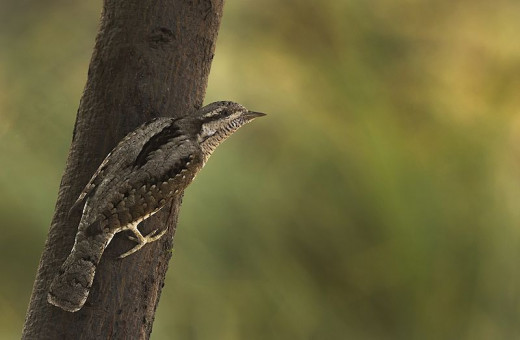 The Eurasian Wryneck belongs to the order of birds known as the Piciformes {Woodpeckers} and the family Picidae within that order. They have been placed in the Genus Jynx which derives from the Greek name for the bird junx. It has been allocated the specific name of torquilla from the Latin torquere indicating to twist. The English name derives from the birds ability to turn its head 180 degrees.

In the UK the bird is placed on the RED list of conservation concern { declines in population/distribution of 50% or over in the last forty years or so. It is therefore subject of a Species Action Plan under the UK Biodiversity Action Plan. In the UK it is currently classed as a former breeder, and passage visitor with an estimated 254 passage individuals.{ Source BTO} It is a very rare breeder in the UK.

The Wryneck is still a regular Autumn migrant in small numbers to sites in eastern and southern coasts, and a few are seen each spring. They are occasionally seen in gardens during the autumn. This year { 2014} for example, there have been confirmed sightings in Norfolk,Shetland, East Yorkshire and Northumberland.

The Gaelic name for the bird is Geocair, the Welsh Pengam and the Irish Cam-Mhuin. Local names for the bird includes Snake bird and Cuckoo's mate.

A Eurasian Wryneck was found dead on February 16 in 2000 at Crane Naval Weapons Support Centre Indiana. The last recorded one before this was found dead in Alaska September 8, 1945. Source Chipper Woods Bird Observatory.

Here we review the species, its lifestyle and habits. There are historical notes from past ornithologists and other eminent writers. As always we commence with a description of the subject under review.

Wrynecks are sparrow sized birds that weigh between 30-45 grams. The plumage as the appearance of being brown and streaked. Unlike the typical woodpecker's it differs in its posture by not using its tail as a prop. However,its calls and general behaviour indicates a close relationship to those birds. It is an ant eating specialist and often feeds on the ground like the Green woodpecker**. They also have long tongues characteristic of the woodpecker's for extracting prey.

The upper parts are a pale ashy grey all the feathers tipped with pale sandy brown and narrowly barred black in the male,tipped with pale sandy brown in the female. The overall effect is a mottled grey brown with paler under parts. They have a short,slim,pointed bill a long dark eye stripe,and a finely barred bright buff throat. The tail is broad-barred,and rounded. The sexes are very similar and very difficult to tell apart in the field.

The flight is much less undulating {bounding} than that of other woodpeckers. Hops on the ground and creeps up trees. It can be told from the Tree creeper**,the only other small brownish bird that creeps up trees by its larger size,straight bill and longer tail. In general appearance it is more like a large warbler than a woodpecker. The tail appears distinctly longish in flight. The voice is similar to that of the Nuthatch** being a high pitched call.

** These species are available to view on this site. 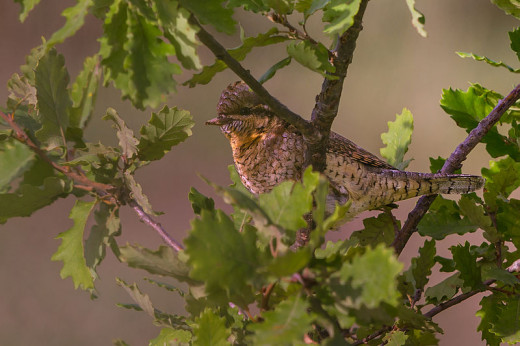 Part of the Project Phoebus {France}

Here in the UK the bird was once a frequent spring visitor,although they have never been numerous. Howard Saunders {1800's} relates,

" It is a regular spring visitor to England,sometimes arriving in the south by the middle of march,though usually about the first half of April,for this reason it was often referred to as the 'Cuckoo's mate' or 'Leader'.,names which have their equivalent in several European countries. In the south eastern counties it is more numerous than in the west,and it is rare in Wales. Lancashire has seldom been visited of late years and Cumblerland { Cumbria} it is merely a straggler. In Yorkshire and Northumberland [ All the latter named places are in northern England} it becomes rare. Statements that it has nested in Scotland need to be confirmed"

In Ireland it was taken in County Waterford in the summer of 1887 and on the Arran Islands off Galway Bay on October 6th 1866. { they no longer occur in Ireland except as a rare passage visitor}.

Due to the general colouring the birds exhibit to the Lichen-covered bark of trees and its general camouflage it is probably frequently overlooked. Yet it is less a bird of the woods than the true woodpeckers and as such one would expect to see it more often than one does, but its extreme wariness and shyness doubtless has much to do with it.

One of its former haunts { in England} seems to have been the lichen covered branches in old orchards, and here they were once seen passing with wild uncertain flight from one tree trunk to another. After alighting it stretches its neck and twists its head from side to side in the peculiar manner which probably attributed to the alternative common name of 'Snake bird'. More often than not when climbing a tree trunk the tail is held clear of the trunk,rarely it it uses its soft tail for support in the manner of a woodpecker. When on the ground the Wryneck hops somewhat irregularly,its tail and sometimes its wings being used,the former being jerked laterally.

Morris 'A History of British Birds' {1867} states that " This is a singularly elegant,though plain coloured bird,is seemingly a link between the Woodpeckers and the Cuckoos" he goes on to say " They are unsociable birds,solitary except in the breeding season. The food of this species consists of ants and their eggs and larvae. These are obtained by means of its projectile tongue,to the glutinous substance on which they adhere,having first,if necessary, shaken with its bill their house about their ears,and so dislodged and collected them together, otherwise if the earth be hollow, the hard-tipped tongue, which is two inches and a quarter in length, is thrust into interstices,and the tenants extracted"

It also feeds on other insects and Bechstein reports that they eat elderberries. Montague,kept one for a short time, and he observed that the tongue is darted forward and retracted with unerring aim, and at the same time with such velocity , That an ants egg,which is of a lighter colour,and more conspicuous than the tongue,has somewhat the appearance of moving towards the mouth by attraction,as a needle flies to a magnet. The young are fed upon caterpillars,ants and their eggs. 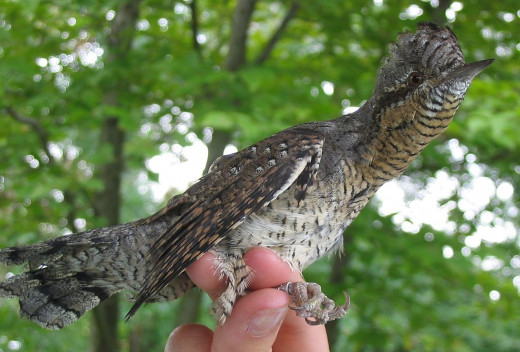 Before it became illegal to keep wild birds in captivity, they were commonly kept by bird collectors and Ornithologists. They were procured by whatever means by Bird-Catchers who made a good living from their chosen employment. The caught birds were sold as aviary and cage birds and for food sold at the markets. Thankfully these days are now behind us. However, it was an important period in the history of our fellow creatures,and as such the next few paragraphs relate to that period.

There is on record the following account of a bird keeper who had three young Wrynecks' in captivity. " These birds fed greedily on nightingale food,and when hungry they uttered a 'silvery shake'. They were very tame and used to run over to me,frequently using their tails as partial support ,they always moved upwards in little jerks. In a large cage the tails were almost always called into requisition, the feathers being partly projected through the wire netting as they hopped upwards."

" Towards the end of July ,sadly, the first of my Wrynecks died and a second sowed signs of ill health, but by moving it nearer to the air,and administering caterpillars {like pills} I managed to prolong its life until the night of August 14 when it also died, the third bird continued to do well, was very active and had a healthy appetite. However, the long chilly nights of November sent it in to decline from which it died on December the ninth "

" One curious fact I noticed with the Wrynecks was that although from the first they readily ate the young green caterpillars of the cabbage moth, they would not touch the older caterpillars until, compelling then to swallow several, they had made the discovery that the colouring had nothing to do with the flavour,even then they took the green ones first"

Wryneck perched on a branch 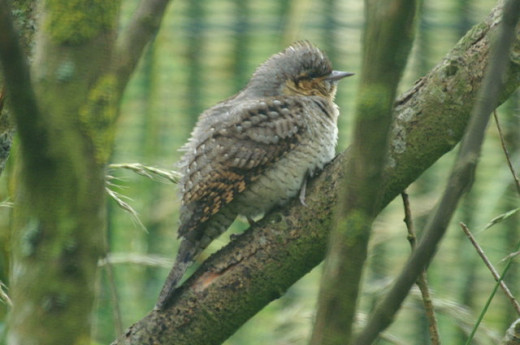 Nesting and young, including historical observations.

Nesting takes place from the middle of May to the middle of June,or if the bird has been disturbed,sometimes a little later. According to Butler, who conveys to us that unlike the woodpeckers the Wryneck does not excavate a hole for the reception of the eggs, but utilizes one already available,usually in the trunk of a tree,and whether the cavity is deep or shallow seems to be immaterial to this bird.

Butler, recall in his notes, that " sometimes,as I proved in 1887,a hole in an earth-cutting is taken possession of and no actual nest is found."

The eggs that number seven to ten are deposited upon the rotten weed or crumbled earth at the bottom of the hole. They have a white background colour with a rosy tinge when first laid. According to Frank Norgate he took forty two eggs from one nest of this bird in 1872,he says the nest was in an old stump," It being known that if the eggs are removed the Wryneck continues to lay" Norgate repeated the action in 1873, but in 1874, the poor thing appears to have been so weakened by the strain that only one egg was deposited,and after that year was seen no more!

Here I echo the sentiments stated by Butler on this subject. He states " To my mind for a man to persistently rob a bird of every egg through successive seasons seems bad enough,even if his object was to prove the productiveness of the species, but I cannot understand how he could have the hardiness to make his action public"

The Wryneck is a close sitter and the female incubates the eggs for 12 to 14 days with some relief afforded by the male.Once the clutch of eggs is complete she will only leave the nest if the male takes over. As a consequence it seems it was no uncommon thing for one or the other parent birds to be caught upon the nest by the egg collector when it 'Hisses like a snake,pecks at his fingers and finally feigns death'.

After leaving the nest the young accompany their parents and continue to be fed by them for a time.

One eminent ornithologist records the following experience:- " On July 9th 1887,I was examing Mole burrows,Sand matins holes etc, in a large brick-earth cutting on Mr. Drake's property at Kemsley, Kent {southern England} on the chance of finding a late nest. When I passed a small hole I heard the sound not unlike that produced by shaking a number of silver coins between the palms of the hands. Taking out a large knife I set to work to enlarge the hole and after half an hour's hard labour I was able to insert my hand, when I felt the soft backs and heads of five young birds,evidently fully feathered. on lifting one out I discovered it was a Wryneck and promptly put it into a basket, hoping to secure the whole family, but as I put the second in to my basket the first escaped and another dashed past my hand from the nesting hole."

" However, I secured three and got them safely home, I put them in a small,cage and went down to dinner. Going up to feed them shortly afterwards I discovered all three birds sitting together on the back of a chair, they having all got through the water hole of the cage"

Wryneck on the ground. 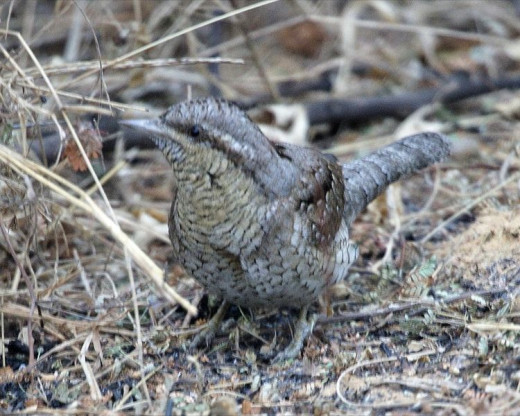 Lip Kee from Singapore originally posted the image on Flickr.