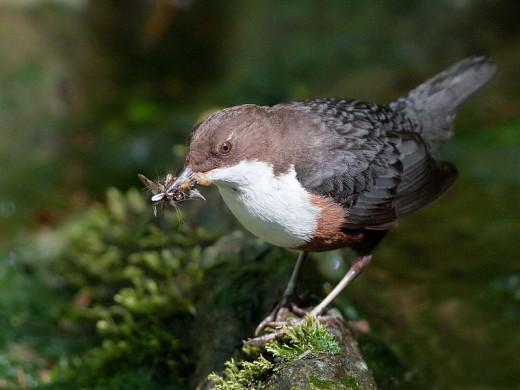 It belongs to the order of birds known as the Passeriformes {perching birds} and the Family Cinclidae and placed in the genus Cinclus which derives from the Greek Kinklos a small water bird, mentioned by Aristotle and others. In the UK and Eurasia it is not a bird of conservation concern. In Europe there are races of the genus, which vary slightly in plumage colour. Cinclus cinclus was once named Cinclus aqaticus.

In the USA it is replaced by the species C,mexicanus which has had a stable population for the last forty years or so and as is the case in the UK it is often referred to as the Water ouzel.

The Germans call the bird Wusserschwatzer, the French Merle d' eau, the Italians Tordo del aqua. The Gaelic name for the bird is Gobha-dubh-an-uisge, the Welsh is Bronwen-y-Dwr and the Irish Gabha Dubr.

In this review we look at the lifestyle and breeding habits of this handsome bird with extracts from ornithologists of former times who had some interesting perceptions of the species. The review is based on UK birds but alludes to the species in whichever country it occurs. As always the best place to start is with a description of the species under review. 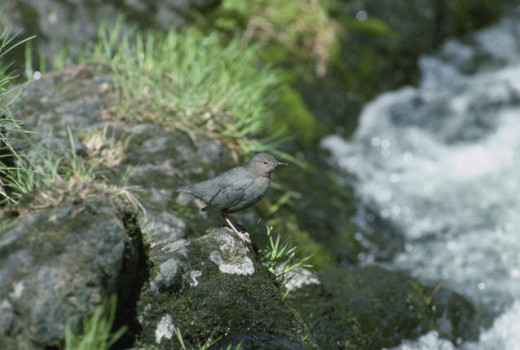 Illustration of the dipper. Familiar Wild Birds Public domain courtesy of the BHL. 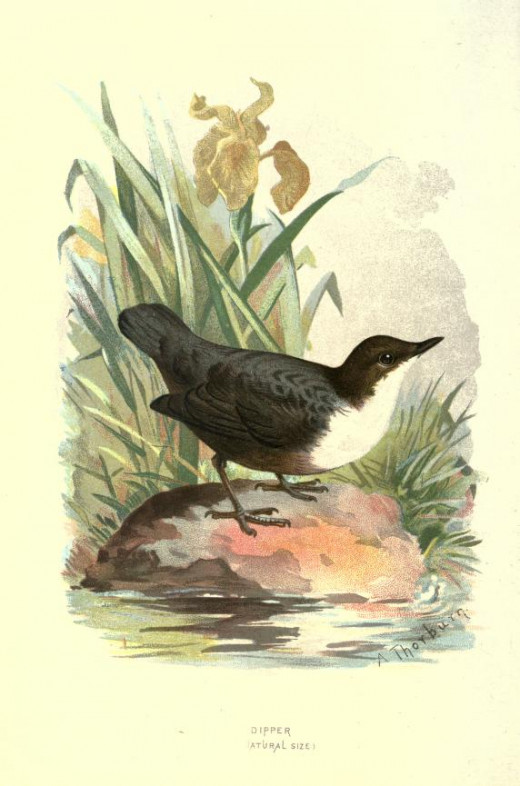 Cinclus cinclus has the upper part of the head and nape dark brown. back and rump a dark slate grey, each feather tipped with black, giving the parts the appearance of being blackish brown, covered with cresentic dark grey marks. The quills are dark blackish brown on the outer web, narrowly margined with dark slate. Larger wing coverts similar to the quills, smaller ones like the back. The tail is dark brown, washed with dull slate. The throat, fore part of the breast and a small spot above and below the eyes are pure white.

The lower part of the breast is rusty red, merging into blackish brown as are the rest of the under parts. The flanks, however, being washed with dark slate. The bill is blackish. the legs dull brown and the irides brown. In relation to its body size the wings are medium short the tail also medium short, the neck short, bill short and the legs are a medium length.

They are about 18cm { seven and a quarter inches} long with a wingspan of 28cm {eleven inches} and both the male and female adults weigh 64 grams. the male and female can not be told apart in the field. The flight is straight and fast. Runs or walks on land, but most often seen standing on a rock in the middle of a stream , bobbing up and down {dipping} can swim both on and under the water. it enters the water by wading in, or by diving from water or air. Habitually walks under the water on the stream bed.

Most of us that love nature and for those that love birds, and, have quietly followed the course of an upland stream, are very likely to have heard the lively 'chit,chit' of the Dipper. It may be that they are encountered hopping from stone to stone in the center of a stream, displaying their white breasts and jerking their short spread tails and bobbing up and down. If they are disturbed they fly off rapidly hugging the waters edge.

This shy retiring bird tends to inhabit the districts in which rapid streams and rivers are a part of the general habitat. In warm weather the bird tends to keep to the higher portions of the water course, but when it is very cold, it follows the course of the river or stream into the valleys below.

The common name of Dipper is said to derive from its characteristic habit of continually 'dipping' in water for its food, which consists almost exclusively of aquatic insects, especially beetles and their larvae, but also flies that are caught on the surface. It is a remarkable accomplishment, for a song bird of the Thrush family, to be able to walk upon the river bed that it frequents.

In order to achieve this fete the toes of the bird are long and flexible and well adapted for clinging to stones and the uneven bottom of the river bed. It is purely a river bird and is altogether more at home in the water than when it has to walk upon the land. It is another amazing fact that the young birds are able to dive, with some skill, even before they are fully fledged.

Studies have revealed that the Dipper is partial to certain localities and therefore stays loyal to the same river or stream with remarkable consistency.

The song of the Dipper is a sweet, quick note, retained throughout the year and is uttered both in flight or when perched upon some stone. Despite this sweet utterance the Dipper is a very quarrelsome bird and it is rare, with the exception of the breeding season, to see more than one of them in the same place.

Each bird has its own feeding area and if an intruder strays into it the occupier will quickly drive the intruder away.

Even during the dreary winter months, when the trees are black and naked and the ground is crisp with frost, or the streams are flowing beyond their bounds, through melting snow, the song of the dipper is strong and rapid often continuing for two or three minutes, and reverberating in the clear air, like a voice of spring in the depths of winter. In some of our northern counties, where these birds inhabit, it would be difficult to follow the course of a fast flowing stream or river for a mile or two without encountering this species whose song greets the rambler which has been described as a 'certain subdued warbling richness'.

According to the observations of Mr. Macgillivary, who, conveyed to us how the bird moves under water, and says that in reality it flies, extending its wings precisely as it would do in the air. In the water the body tends to slant downwards, and the bird in Mr Macgillivary's opinion 'evidently has to use considerable exertion to keep itself at the bottom of the water.' he remarks ' that in some instances, when he has clearly seen its motions there, it appeared to tumble about in a singular manner, its head inclining downwards, as if it were pecking at something, while both legs and wings were actively employed-it was at this time , apparently, in the act of seizing food.'

He also added that its structure was not fitted for walking for its short legs and long curved claws are most unsuited for the act of running, though well adapted for effecting a steady footing on the slippery stones which lie under or above the water.

Illustration of the dipper 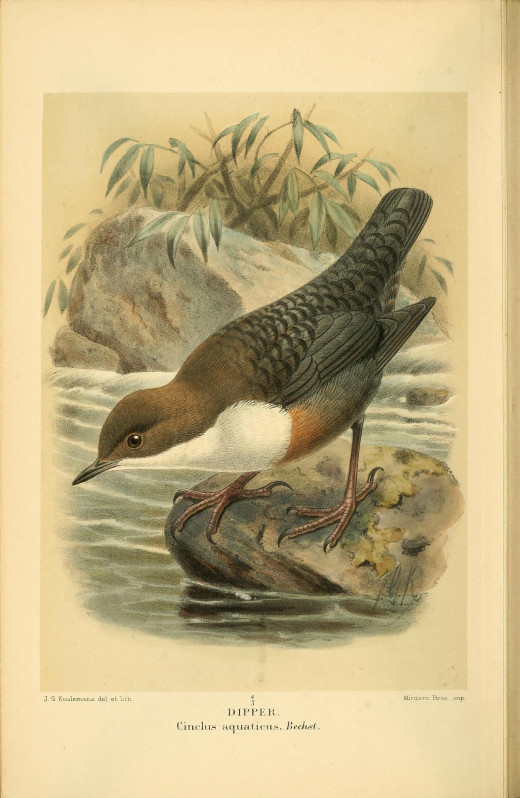 Persecuted in the past.

Dresser, {1800.s} conveys to us that the Dipper has in the past been subjected to persecution, owing to the mistaken belief, that the bird feeds on the spawn of Salmon and other fish, he remarks " But I need scarcely say that this accusation is utterly unfounded, its food consisting solely on aquatic insects"

According to Mr. R. Gray , it was once a custom in Scotland to allow any one who shot a Dipper the privilege of fishing during the close season as a reward. Mr. Harvie Brown stated that until the 1890's {at least} a reward of sixpence per head was given for Dippers in some parts of Sutherlandshire.

Mr.R.E.Alston, who carefully studied the stomachs of specimens shot by him in Scotland coveys that-" They invariably contained aquatic insects and their larvae, and sometimes fresh water shrimps"

Mr R Gray is also on record as sating 2 Instead of doing harm by destroying the spawn of fish, they act as the angler's best friend by devouring immense quantities of the larvae of dragonflies and water beetles, creatures that are known to live a great extent on spawn and even newly hatched fry of both Trout and Salmon"

Mr Gould examined by dissection five specimens sent to him from Penoyre, on the Usk, where they were said to be feeding on the recently deposited roe of the trout and salmon and writes that he found -"no trace whatever, of spawn in any of them. their hard gizzards were entirely filled with larvae of the Phryganea and the water beetle {Hydrophilus}. One of them had a small bull-head {Cottus gobia} in its throat, which the bird had doubtless taken from under a stone"

The nest of the Dipper is placed in some cleft of a rock or under the projecting portion of a large stone, even behind a fast flowing waterfall, but whatever the situation chosen it is always by a stream or river. It is a well made structure of moss and grass, wide, deep and domed, with the opening in front, it is usually well lined with the leaves of the oak tree. the size of the nest depends a good deal on the situation chosen and the character of that locality, but regardless of its shape and size it is always very well concealed.

It blends in perfectly well with the surroundings and even when the parent bird bird has been seen leaving the nest it is still very difficult to locate. A writer in the 'Magazine of Natural History ' 1835, remarked-" Once I found a nest among some slender boughs, overhanging a stream, and once beneath a waterfall, at a point where the rock retreated a little in the middle. The water falling in a sheet just over the nest, and forming as it were, a crystal veil to it. Indeed the eaves of the nest {as I call them} were always dripping wet, whereas the oak lining within remained perfectly dry. The art with which the nest was accomadated to its situation was consummate"

Mr Thompson {1800's} mentioned a pair of Water Ouzels {Dippers}, which frequented a shade erected over a large Mill-wheel, of forty feet in diameter. It was supposed that they had a nest there, though it could not be seen, or discovered, but he added that the appearance of the birds often caused surprise, as they emerged from the dark and gloomy abode, between the arms of this gigantic wheel, which was almost constantly in motion.

The eggs are oval and of a white colour which generally number four or five. they are laid in April. Incubation last for about 17 days and the task is undertaken by the female. The young are born blind and helpless.

The young are ready to fledge in around 21-22 days after hatching and the pair may often raise a second brood during the season.

Illustration of dipper with young. 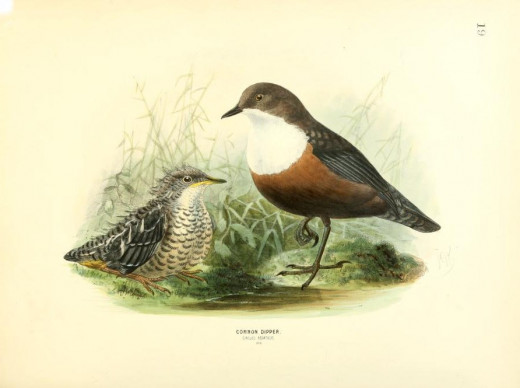