The plant grows to the height of about two and a half feet { 80 cm } or higher. The stems arise from a basal rosette  of many ,simple or more rarely distantly toothed, lanceolate foliage. The unlobed leaves distinguish this species from the Field scabious,  Knautia arvensis. it can also be told from the Greater knapweed Centaurea scabiosa, by its leaves being in opposite pairs, those of the knapweed are arranged in alternate fashion.

The basal leaves have a prominent pale midrib, the stem leaves are arranged opposite to each other and are toothed. The long root of the plant formed in the first year is radish or carrot shaped, it then becomes woody and comes away from the upper part. As it undertakes this process it gets a gnawed or ragged appearance as though it has been bitten off. Legend has it that the Devil bit off the root as thus the common name derived.

The almost globular flowers { see Image above } are about three quarters of an inch wide { 2cm } and they are found in bloom from July until October. The individual florets that make up the flower head are more or less of equal size although the outer florets may be marginally longer.

The stamens of each floret, as in other species of Scabious are a very conspicuous feature. There are small linear bracts in between the flowers. The flowers are purplish blue. In bud the flower head is globular, when in flower the protruding stamens give a 'pin-cushion' effect. Each floret has four petals.

The resulting fruits {seed capsules} is 5-7 mm long, rectangular and with eight furrows. The fruit  is crowned by four green  lobes and four dark,spiny sepals. 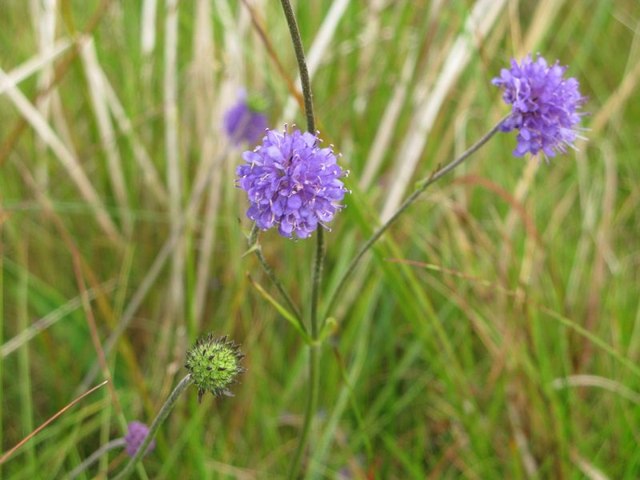 According to Culpeper {1600'as} " the plant is pleasing and harmless, the root of the plant being boiled in wine and drunk. It is very powerful against the plague and all pestilential diseases or fevers and poison, it also helpeth all that are inwardly bruised on the skin by any casualty or outwardly falls or blows,dissolving the clotted blood and the herb or root beaten and outwardly applied ,taketh away black and blue marks on the skin" . Those are just some of the virtues Culpeper declared about the species.

In later herbals the plant was still being used for its diaphoretic {causing sweating}, demulcent  and febrifuge properties. It was recommended that the whole herb was to be harvested in September and dried. It was said  to make a useful tea for coughs,fevers and internal inflammation. It helped to purify the blood. Externally it was recommended as a wash for skin disorders.

In relatively  recent herbals it was recommended to be employed as an expectorant syrup to relieve  respiratory complaints.  This was produced by using a small amount of herb with brown sugar mixed with water and then honey added at the end of the process.

Please not the above information is meant as historical information and not as a guide to self medication.

Devil'sbit scabious showing the sepals beneath the florets 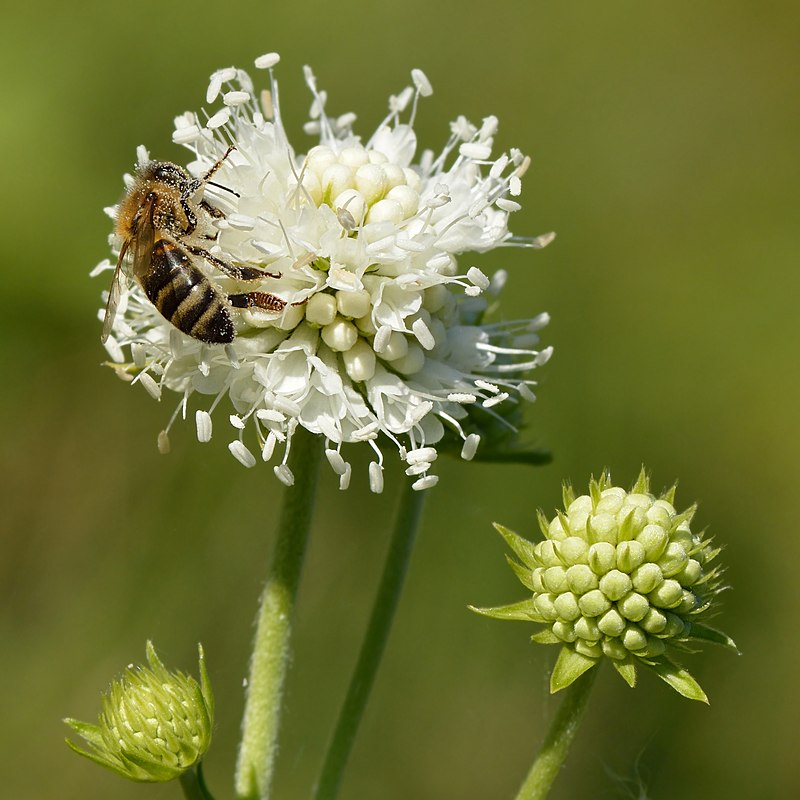 All other species of flora that occurs on this site are grouped together in the content banners above.

Flora via Links. Click on the links banner at the top  of the page. Scroll down to relevant box. Click,this is a direct link to the article.