A look at the Red Deer Cervus elaphus

Here we review the red deer one of the largest species.

Red deer stag  with his antlers 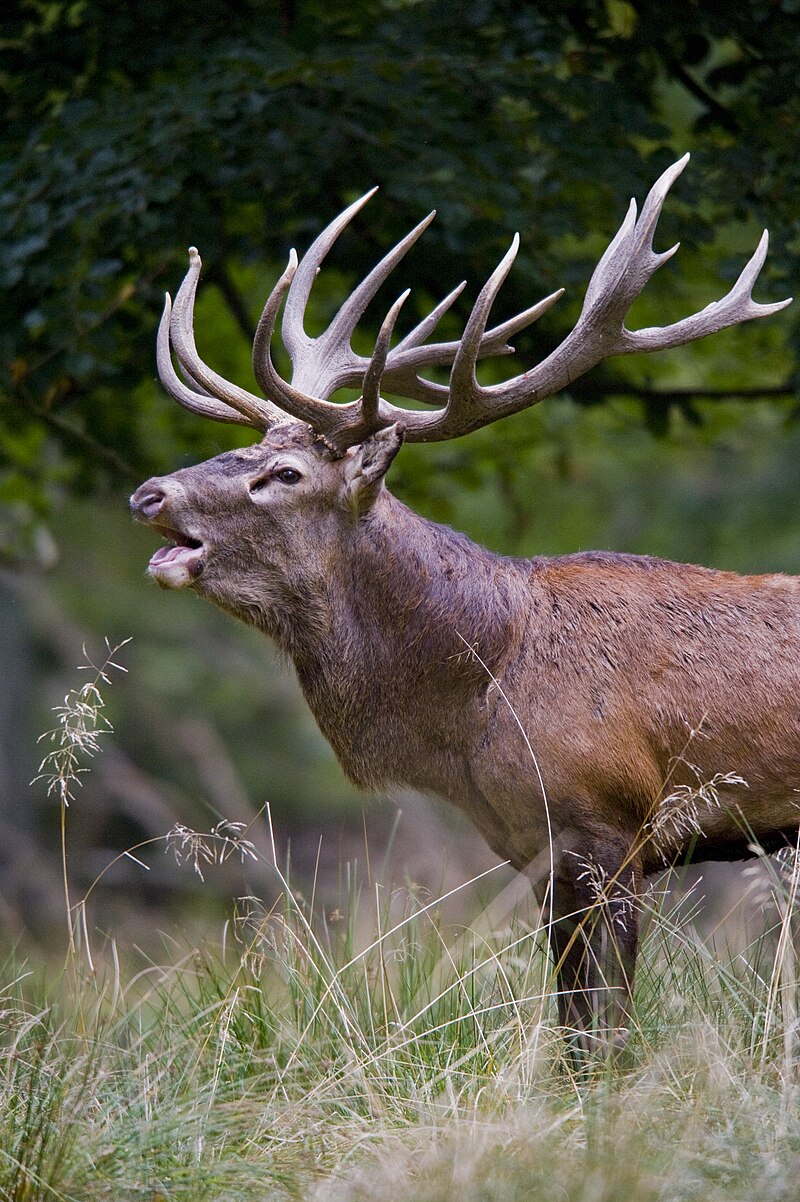 A well grown stag stands four feet high at the shoulders. the hind being four or five inches less than this.the body colour is a rich red brown, the neck more thickly coated and inclining to a greyish tint and there is a yellowish white patch on the buttocks. A stag in its short shiny coat and carrying a pair of well developed antlers is an impressive sight.

The various stages of growth of the antlers warrants a mention in this  description and these stages of growth will apply, more or less to all the Cervine family. The fawn or calf is usually born in early June, and the young male animal has a simple form of antlers by the following spring. They are straight and conical and unbranched. At this stage of their growth the gamekeepers gave them the name of 'Brocket'. About the end of February in the following year the Brocket sheds its antlers. The new antlers soon make its appearance, and is found to have grown an addition in the shape of a 'brow tine' while the beam itself remains the same as last year, except that it is larger and stronger.

The two year old Hart  was then known as a 'spayad'. the next year the beam throws out an extra front branch called the tres tine, and in the fourth year the 'bez tine',appears just above the brow tine, and at the same time the top of the main beam bifurcates into 'sur-royals'. The four year old male was then referred to as a 'Staggard'. In suceeding years the whole antler of the 'stag' is not only larger, but the sur-royals increase, breaking out in a series of snags forming something like a cup, until it reached the full adult, a 'Royal hart' with antlers three feet long weighing as much as seventy pounds and possessing anything from a dozen up to forty points.

History of the red deer in Britain.

Before cultivation had extended so thoroughly over Great Britain red deer were very common  and widespread in their distribution and could have been encountered in great numbers. The red deer were protected by stern laws and deer poachers were classed as the lowest of the low and punished severely. However, some men defied this law and ' bent their bows and lived upon the chase' and some such as the legendary Robin Hood were to become regarded as national heroes.

Originally the red deer roamed at will from the north to the south of Britain. The weald of Kent was no less a haunt of well furnished hinds than the waste lands of Lancashire, or the most distant solitudes in Scotland. However, The rich land owners ganged together to obtain authority from the Crown to enclose their favourite chase in many instances, with the consequence being  that a large number of prime deer habitat became private property and in England this was particularly true.

Red deer lived on the mist wrapped hills of the Lake District. They once roamed from the shores of the North Sea to the red sand stone cliffs that break the swell of the Irish sea. A stag was called a 'Forester' in the days when stag hunting had fallen to a low esteem, and everybody shot or poached them at will. With so many guns against them all over Exmoor {southern England} and the neighbouring districts, the red deer grew scarce and were not often seen. They were in fact, in some danger of extinction, being treated as outlaws and killed in and out of season.  If any one saw a stag he roused the countryside. people armed themselves with guns of every kind and set out to destroy it. If a stag was short, he was put into a cart and carried through the place in triumph. Poachers also persecuted the stag which lessened their numbers even more. An example comes from Richard Jeffries, in his book, Red Deer {1884}---

" It happened once that a 'Forester' was discovered in a certain district, and a party was quickly formed to go out and shoot the stag. Among them was a man well known as a successful deer shot, upon whose good aim they chiefly relied. They took with them a gallon of spirits. After some time searching for the stag, and, just when they were getting weary at the attempt, up the forester jumped close to the party. A volley was fired, the muzzle almost touching the stag-but the game went off at high speed."

" The old gunner, however, declared that he had hit the mark, he was sure he had aimed straight. In a minute or two, as they watched bounding up a hill a mile away, suddenly he stopped and lay still, evidently dead. It was found afterwards that the ball from the old gunners  weapon had grazed the stags heart, and yet with the wound he has run upwards of a mile. No other bullet had struck him. It was a wonder where all the balls had gone to, for the shooters were so close to each other they narrowly escaped wounding each other in the cross fire"

Females in their second year can produce one rarely two young per year, each weighing around 15kg at birth. After 15 days or so the fawns are able to join the herd. By the age of two months they are fully weaned. The young fawns are born spotted {this is true of the young of many deer species} however, they loose these spots  by the end of summer.

The fawns remain close to their mothers, until the next seasons young are born. Red deer, in the wild, have a typical lifespan of 10-15 years.

After the rut, females form herds with their new born fawns keeping close to the hinds. When approached by predators the largest and most robust females may make a stand using their legs to lash out at predators, this will usually see off all but the most persistent of them. The only enemy to red deer in the UK is man.

The meat of the deer,-venison, is becoming more popular and is sold in supermarkets and other outlets such as butchers shops throughout the UK . This is particularly true in the autumn.

Monarch of the Glen iconic painting by Sir Edwin Landseer 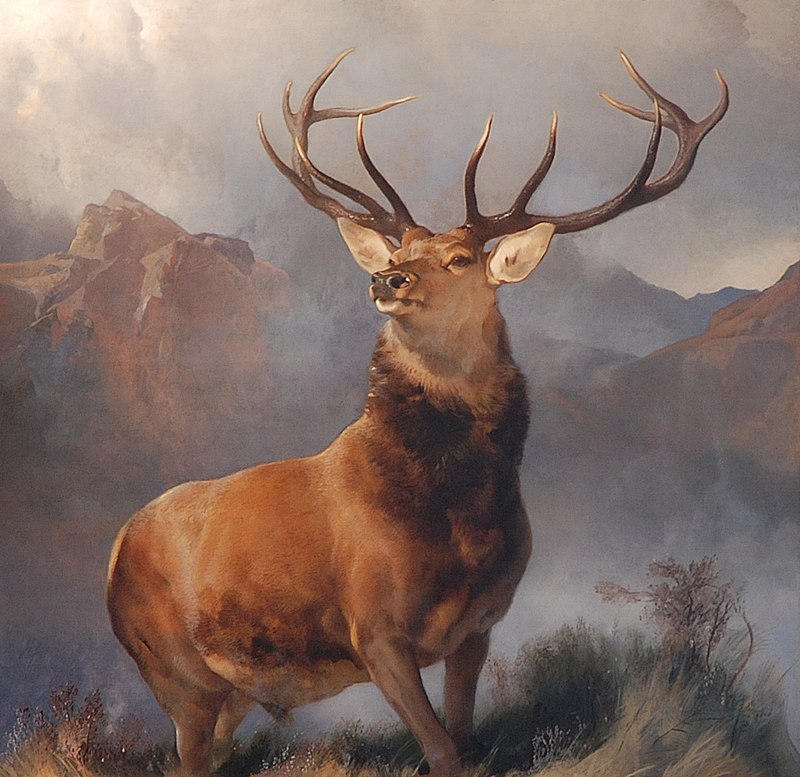