Craneflies belong to the Order Diptera and the sub order Nematocera. They are placed in the family Tipulidae and the tribe Tipulini. The cranefly is also commonly called the daddy longlegs { not to be confused with the Harvestmen that are American friends refer to as daddy longlegs} other names include harry longlegs. they are the largest insects not onlyof Nematocera, but if the length of the body and length of limb is taken into consideration, the largest of Brtish Diptera.

The Tipulidae are easily distinguished from the other familes of this group by a transverse seam in the thorax which is not found in those.

There are six families of cranefly in the UK. they are---

Here in the main we review the latter-the Tipulidae

General characteristics of the daddy longlegs.

Daddy longlegs fly at night by holding their hind legs splayed out horizontally, the legs being longer than the wings, they can detect hazards { like a cat's whiskers } and thus avoid damage to the wings.

The long legs look long, clumsy looking, and one wonders why and what use are they to the insect. However, nature does not provide her creatures with any part or even colouring that is not a necessity. So let us review the uses of these elongated legs. One of the uses is a matter of defence. Daddy long legs fly at night, as previously mentioned, and may well be attacked by creatures such as bats. If a bat grabs the insect by the leg, the leg will break off allowing the insect to escape. It does not seem to affect its overall well being. At very least, should the victim be a female, it gives her chance to lay her eggs.

If the insect gets into your home it is in an alien environment and looks slow and clumsy, which indeed in this environment they are. However, in the long grasses of their natural habitat the legs spread easily between the stems allowing speedy and efficient movement up or down.The legs sense whatever they touch , hence once again they act as a defence mechanism. many spiders including the funnel web spider dwells in such places. Should the sensitive leg touch a web, once again, the leg will break off easily allowing the cranefly to escape before the body becomes entangled in the snare.

The legs help the crane fly to lay her eggs by acting in the manner of a six leg "tripod" assisting the female to push her ovipositer well into the ground, so that her eggs are deposited safely and concealed. So as we have seen the legs are of utmost importance to the continuance of the species.

Eggs and larvae of the crane fly.

The eggs of the cranefly are no longer than oval, conical grains of a shiny blck colour. When the larvae are full grown they are about one inch {2cm} long cylindrical with a very tough skin from which they acquired the name of leather jackets.

Because they have no legs wriggling is their only mode of movement. they feed on the roots of grasses and at times do great damage. This would occur much more often if it were not for rooks and starlings that devour untold numbers of leatherjackets during a season, nature's economy at work again, the super abundance of one species feeding another. The little burrowing mole may also claim to be the farmers friend in this respect. The pupae appear in August-September at which time a plethora of empty cases may be encountered protruding half out of the earth among the grasses.

leatherjacket the larvae of the crane fly 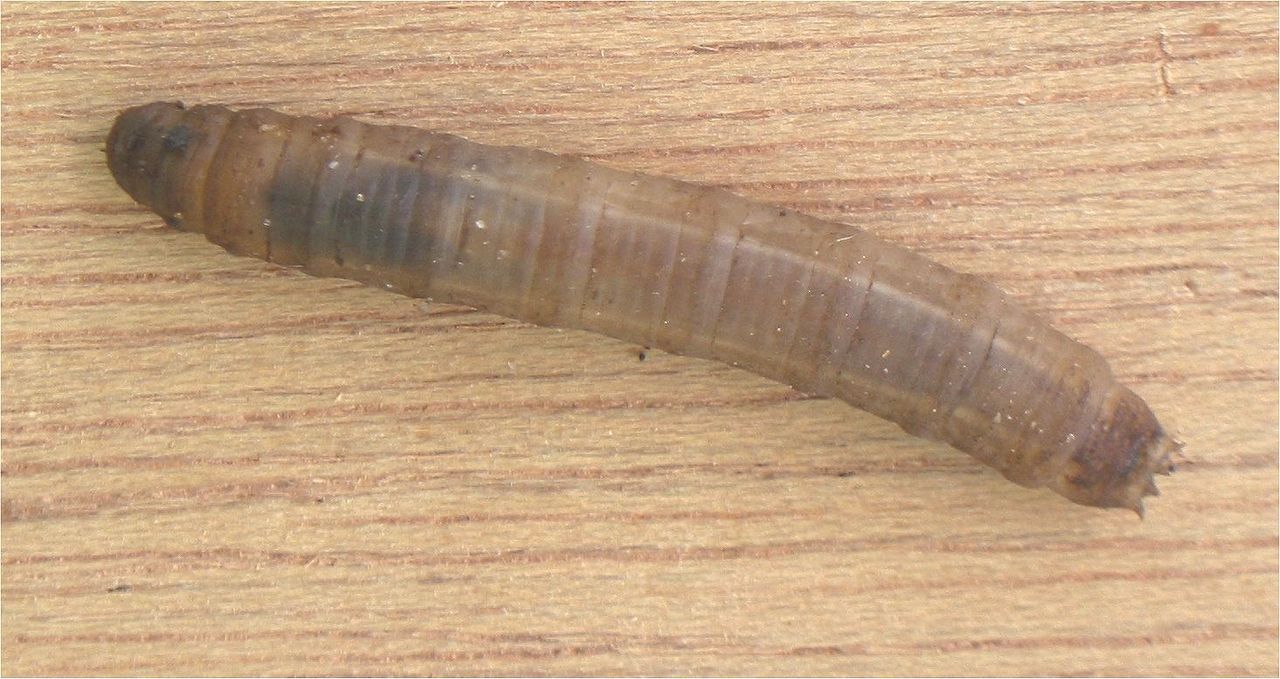 Adults can be a nuisance.

Adults too can become a nuisance. There is on record {1860s} a report of crane flies swarming in and near London. When the resulting larvae started feeding, large tracts of ground in Kensington Gardens and other places were completely denuded of grass.

Tipula oleracea is a large species with a wing span of 1.6cm. They have brown markings on the front edge of the wings. females have a pointed abdomen.

Tipula maxima has a wing span of 1.6 to1.7cm. This species has dark marks all over the wings. The thorax is greyish, the abdomen reddish brown.

The above two species are the commonest and most wide spread in the UK.

There are currently three species that feature under the UK BAP and as such they are a priority species of conservation concern.

They are the River shore crane fly,-Rhabdomastix japonica.