The curlew is a somewhat conspicuous bird and in Scotland it was once commonly referred to as the Whaup or whaap., having very long legs and an usually long curved bill.

The Curlew belongs to the Order of birds known as the Charadriiformes. In the past it was referred to as the Grallatorial or wading family.. They are placed in the Family Scolopiidae and given the genus name of Numenius which derives from neos , meaning new + mene meaning the moon, alluding to the crescent shaped bill. The specific name arquata also relates to the bill deriving from the Latin arcuatus meaning bow shaped.

In the UK where there is an estimated 66,000 pairs during the summer they are currently placed on the Amber list of conservation concern. One of the criteria for this placement is that there has been a decline in population/distribution numbers of the species of between 25-50% over the last few decades. In Ireland it is even more worrying with a decline of 86% which means it is on the Red list of conservation concern {source the BTO} In Europe the species is also in decline, and is listed as 2-concern. Globally it is currently classed as being near threatened..

The Irish name for the bird is Crotach, the Gaelic name is Guilbneach and the Welsh Gylfiner. The American Curlew Numenius americanus { or the long billed Curlew} after being classed as near threatened has now, thankfully, been down listed to being of least concern as population numbers have increased.

In this review of the species I will look at the birds lifestyle and habits and include historical references from past ornithologists. As always we start with a description of our subject

The head of the curlew is dark brown lighter towards the base of the bill, which is brown and some seven and a half inches long {19 cm} from its extremity to the eye. The irides are dark brown. The chin is white. The upper part of the back is brownish black the feathers having pale brown edges. The lower part of the back and the upper tail coverts and rump are white. The breast is nearly white and spotted with dark brown.

The tail is barred with dark brown and dull white. the smaller wing coverts and primary quill feathers are black the remaining portion of the wing being blackish brown and barred at the edges light and dark brown. The long legs are a pale bluish grey colour.

In relation to its body size the wings are medium long, the tail short, the neck medium to short, the bill very long, the legs medium long. The length is 55 cm and the wingspan 90 cm the male weighs 770 grams and the female 1000 grams.

The flight is direct, will fly in a V formation, walks or runs on the ground wades in water.

Public domain courtesy of the USFWS 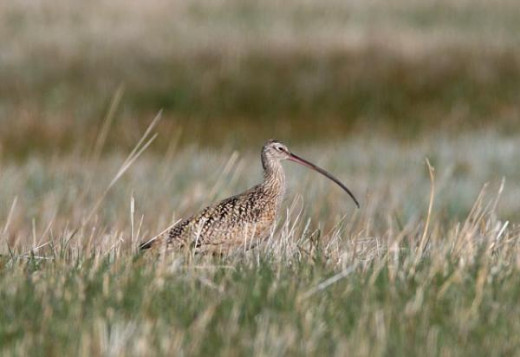 The Curlew was once a very common and familiar species on nearly every part of the British coasts. It favours the seas shore where the ebb tide uncovers large surfaces of sandy flats and it may also be encountered on the mud-flats of tidal rivers. When feeding on the sea shore the curlew feeds upon small crustaceans, marine insects and worms that abound in such places. However, as soon as the advancing tide covers the shore they immediately change their feeding places for the fields and open country that may be located in the immediate vicinity.

When any large area is gradually submerged by the advancing waters, the Curlew moves a little further inland and recommences feeding until forced to retreat, and this process is repeated until the feeding place is completely covered.

When flying to their customary resorts the birds generally proceed in a direct line. Should the first group of birds be alarmed at any noise or some unusual occurrence, the whole party will utter a harsh cry and the cry is taken up by the birds in the any succeeding groups and the direction is immediately changed.

Curlews are by no means easy to approach closely but it is said that they can be brought closer by means of imitating their whistling cry. One of the notes uttered by this bird, apart from their haunting bubbling song, sounds like 'corlooo' from which its common name is said to derive. The bubbly song of the bird is very shrill and can be heard from a great distance, and, such a haunting cry was unlikely to have been missed by the poets and other writers. Sir Walter Scott, for instance, in the ' Lady of the Lake' writes " Wild as the scream of the Curlew'.

According to Meyer {1850} the Curlew was a common ornament on the English coasts, northern and southern, from September to March or April,and although individuals could be found on the Norfolk coasts {East Anglia} and elsewhere, when the majority are away to the moors for the purpose of breeding, they are evidently non-breeding birds.

Meyer noted that in the south of England the Curlew breeds in Cornwall, Devon, Somerset and Dorset. it is also found throughout Wales and from Yorkshire, N.E. England and Derbyshire northwards and in a good many parts of Ireland it is a breeding bird of great numbers.

Scandinavia to Japan and as far south as Brittany completed the breeding range of this bird according to Meyer. He added that it winters in the Mediterranean basin, and on all the coasts and islands of Africa and India ,passing through Persia, Palestine, Turkestan and the Chinese coasts on migration.

Curlews were considered to be a challenging bird for 'Wild fowler's'. Dresser in 1881 writes of the skill required by the wild fowler to take one of these elusive birds for the table-" When traveling along the east coast of Finland in the spring of 1861, I found the species common everywhere on the dreary wild moors we crossed, and often stalked them most pertinaciously. However, it was often with no other result than wearied limbs and loss of patience. For the birds would generally let me get within shot, and then lifting the wings and taking a preliminary step or two would take to the air wailing at me as though in mockery.

Dresser relates another instance--" When collecting on the shores of the Gulf of Bothnia { northern part of the Baltic sea situated between Finland's west coast and Sweden's east coast}, I often spent the whole night along the coast or along some of the small bogs. For at that season {May} the nights were quite light enough to allow one to shoot with a rifle at long distances and the atmosphere during the balmy soft Arctic summer night is much more preferable to the heat of the day. Especially so for a shore shooter, that I generally went out collecting at night. When passing through the meadows which fringed the shores I never went far without disturbing a Curlew or two, and their wild uncanny cry, breaking the solitude of the night, remind me forcibly of the old Scotch idea that the Curlews and such like "Lang-nebbet-things" are not altogether unconnected with the evil one"

Eggs of the Curlew 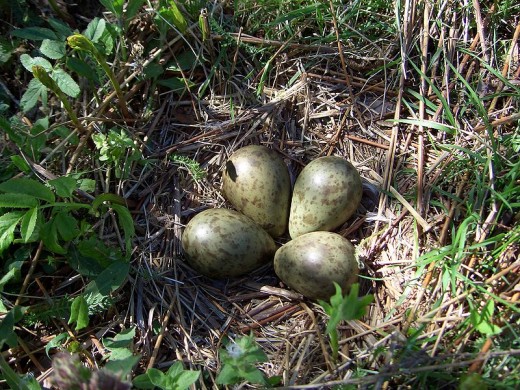 The Curlew commences its nesting activities at about the beginning of April. At this time the birds have left their coastal haunts and have arrived at their various breeding grounds. In England they prefer the upland pastures and moor land to rear their young. During the breeding season they are especially watchful and wary.

Mr. Robert Grey [!800's} writes " At various times I have wandered many miles across their moorland solitudes, where the only other bird within hearing was the familiar meadow pipit whose feeble note served but to deepen the expression produced by the wild cry of the Curlew. The note is most bewildering when the watchful male birds are disturbed on hillsides when the female is at the nest. One after another they rise from the brown heath till the seemingly lifeless moor rings with their pertinacious outcries. Soon the alarm spreads, and, away in the distance, these wary birds, scarcley seen against the grey of the mountain, rise in the air above their mates, hovering uneasily until the disturbance has passed. then as the traveler gets to a distance, just out of their sight, they settle beside them again with a strange musical utterance of satisfaction- a long gurgling note, exceedingly wild, yet not unpleasing when we think of the faithful bird assuring his mate that the danger has past"

The nest, is that is what may describe the dearth construction, is usually some leaves or grass hastily laid together, and generally situated in some taller rushes, in open spaces were heath is found. four eggs are usually deposited of an olive green colour, blotched and spotted with dark green and brown.. They are roughly pear shaped and so arranged in the nest so that the pointed ends point towards each other.

The incubation period lasts for around 27-29 days and the task is carried out by the female with occasional help fro the male. The chicks are capable of running around as soon as they have hatched but at this stage are unable to fly. However, on approach of danger they will squat perfectly still and rely on their superb camouflage till the danger has passed.

Illustration of Curlew with chick. 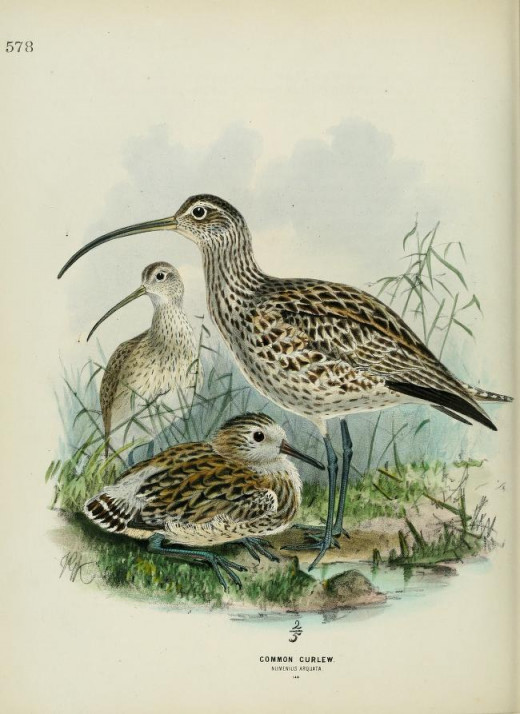 During the season of Autumn the Curlews collect and migrate, being then met with in flocks especially near the coast. They are no less wary in this season as in any other.Mr. Thompson {1800's} in writing of their habits in Ireland, especially refers to this extreme wariness--" In Belfast Bay, in an undulating sweep of the coast, little more than two miles from the town on the County Down shore, named Hamson's Bay, there is a sand bank far out of the range of gunshot from any of the fences that half encircle it, and wholly inaccessible to the fowler from any direction without his approach being observed.

" On this bank the Curlews, before being driven off their feeding grounds, by the advancing tide. Then a large body of them will take to the air followed by all the others which form smaller flocks.They rise to a considerable elevation, and wing their way to insular rocks at the southern entrance to the bay, keeping up all the time a soft gutteral concert, seemingly of affection, quite the reverse of their normal harsh cry.

" On those rocks in perfect security the birds remain until the ebbing tide once again exposes the sand-bank they have left. They do not leave their oasis of safety as they arrived, but return in small flocks , flying low and silently or rarely uttering their low gutteral note. They appear consecutively over the western point of Hollywood Rabbit Warren, and hold the same course on wards until once again they are spread over the Zostera covered banks. Their period of absence depends on whether the tide are low or high. In the seasons when the Whimbrel's are here they accompany the birds on their tidal flights"

Today, I fear, that Mr. Thompson would be disappointed with the number of Curlews he would encounter. { see Conservation updates below}

According to the Royal Society for the Protection of Birds {RSPB} the Curlew is in danger of disappearing as a breeding bird in the UK and Ireland. The Curlew is one of forty four species the RSPB have identified as a Priority Species of Conservation Concern.

There was a decline in the UK breeding populations of around 61% from 1970-2010. The concern is even greater in Ireland with just 100-200 birds left in the whole country. Additional updates will be recorded as and when they become available in this article.

The images on this page may be reused. However, the name of the relevant author must be attributed along with any accompanying license..