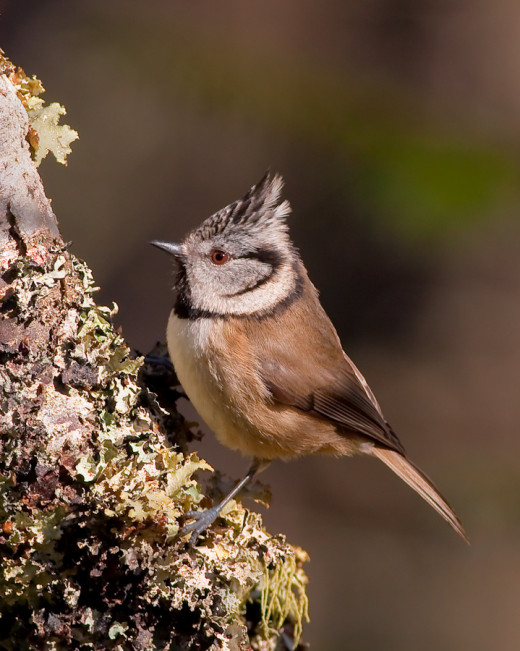 Originally appeared on Flickr. Uploaded to Commons by Snowmanradio. Taken at Aviemore Scotland.

The Crested Tit Parus cristatus { some times referred to as Lophopanes cristatus} belong to the order of birds known as the Passeriformes { perching birds} and the Family Parridae within that order. They have been allocated the genus name of Parus, or in some bird books Lophophanes from the Greek lophhos=a crest + phanes=light. The specific name of cristatus from the Latin crista=crest.

In the UK they are placed on the Amber list of conservation concern { declines of between 25-50% over the last forty years or so. There is an estimated 1,500 pairs in summer {2007}. This and the Lophopanes cristatus sp.scoticus are Amber listed due to European concerns.There are other sub-species in the world.{ source BTO }

They occur in Europe in coniferous Forests or Mixed woodland. 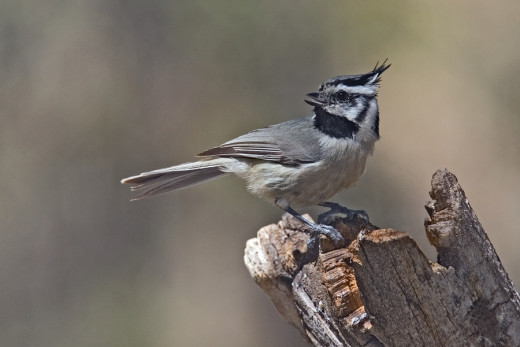 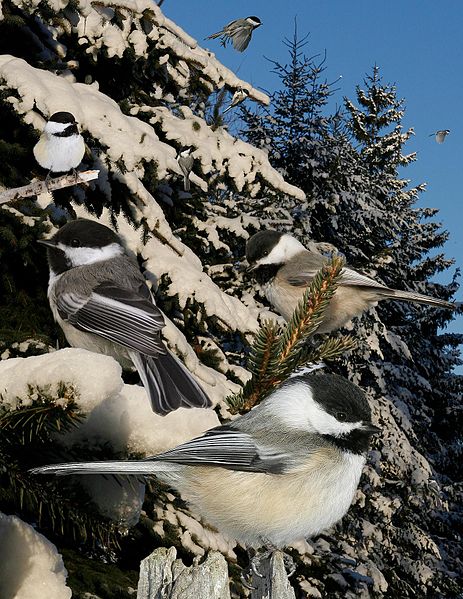 What are crested tits ?

These charming little birds have an extremely large range throughout Europe. However, in the last two decades or so there have been some declines in their population numbers in Europe. They breed in most parts of mainland Europe with the exception of the extreme north of Scandinavia, Italy and most of the Balkans. They are present all year round.

The family Paridae to which they belong comprises the Tits and Chickadees. Although there are species of Tits with crests in other parts of the world,the one in Europe is unique. In America the only bird that approaches this species is the Bridled Titmouse of the genus Baelophus {formerly Parus} which has been allocated the genus name of wollweberi. The most important difference between the two species is that the American bird has the white on the crest replaced by slate grey.

The European species seem to require variation with clearings and forest edge,as well as dead and decaying tree stumps in which they can nest. Like many others of their ilk,they seem oblivious to the presence of people and may be easily observed feeding from a relatively close range.

Here we review this unique species its lifestyle and habits along with historical accounts and observations. As always we commence with a description of the species under review. 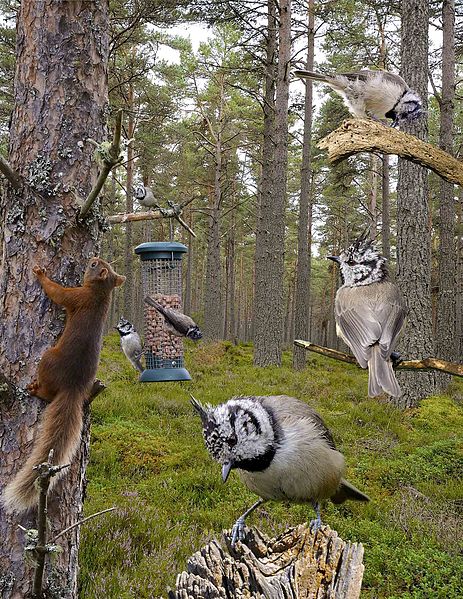 Description of the Crested tit.

These little birds are about four and a half inches long {11.5 cm} and weigh between 10-13 grams.

At a glance- small birds with a black bib , buff coloured undersides and a white face with a black edge to the cheek and a plain brown back,wings and tail.

In More detail- The male has a black bill. The Iris is dark brown. Over the eye is a dull streak towards the nape and from behind it runs a black streak, which unites with a curved band of the same. This is succeeded by a patch of white,and this again by another black band,which comes round the front of the shoulders,until it meets the black of the throat.

The forehead is black and white, the feathers small and scale like. The head is surmounted by a pretty crest of black feathers,deeply margined with white. It is of a conical shape,the feathers are shortest at the front,and gradually heighten,arching forwards, the longest being about an inch in length. At the side of it is a yellowish white with a few specks of black.

The chin,throat and upper part of the breast is black,in a triangular shape,beneath it is a very light fawn or buff colouring,darker at the lower extremity and tinged with a rust colour,as also are the sides. The back is a warm brown with a slight tinge of green. The wings underneath are dark grey. The greater and lesser wing coverts,as the back and margined with pale grey. Underneath light grey.

The primary and secondary and tertiary feathers are as the back,but darker. The primary feathers are edged with pale grey on the inner webs. The first feather is less than half the length of the second, the third and fifth nearly equal,larger than the second and not quite as long as the fourth,which is the longest in the wing.

The greater and lesser under wing coverts are dull white,tinged with a light rust colour,except the outer ones,which have narrow white edges. Underneath they are light grey. The tail consists of twelve feathers, the tail coverts,as the back, but lighter,the under tail coverts are as the lower breast. The legs and toes bluish grey, the claws brownish black.

The female has a crest rather shorter than that of the male. The black round the neck narrower and interrupted and the black patch of the breast of a smaller size. However, it is very difficult to tell them apart in the field.

The crest in this image is clearly seen 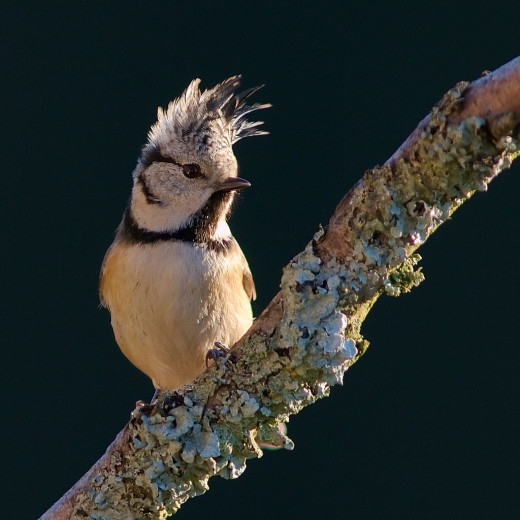 The Scottish Crested tits are geographically isolated from those on mainland Europe and some ornithologists consider them to be a sub-species scotica.Conservationists in Scotland are concerned about the woodlands near Aviemore earmarked for housing development,which provides habitat for a bird experiencing breeding problems in the last couple of seasons.

Here in the UK they are confined to the Pine forests of Northern Scotland. However, if what I discovered in my research is accurate, this has not always been the case. In Yorkshire {N.E. England}, one is stated by Mr.Allis,on the authority of one Mr.J Heppenstall, to have been seen in gardens at Thorne,in the West Riding of Yorkshire. In the county of Durham One was shot on Sunderland Moor,in the middle of June,1850.

About the year 1789, a considerable flock was observed in Scotland,as also in various parts there,in the Autumn of 1848. In other seasons it seems they were met with, but not so plentiful,for the most part in small flocks. One record suggests that they were known to breed annually in a plantation near Glasgow.

Morris ' A history of British Birds' published in London 1862-67,states, " Birds of this of this species are said to be of retired habits,to associate,but little with their congeners,to keep together in small flocks,sometimes in the company of others of their kind,but to be quarrelsome with one another. In their 'light fantastic', performances, they resemble the Blue tit. They appear not to be shy at all,and have been observed to raise and lower their crest at pleasure. Their food consists of insects,spiders,the small seeds of evergreens and berries"

The Crested tit breeds throughout the Pine forests of Europe,but is also said to frequent Birch plantations. Seebohm informs us that " In Autumn it particularly forsakes the Pine forests,where it breeds and is seen in winter in many of the small woods and plantations,and even in gardens of neighbouring districts,but even in these districts it prefers Pine to any other Tree"

The crested tit was once kept as a cage bird in former times in countries such as Germany. However, Butler,who specialized in keeping birds stated " I have never seen one kept in England"

Seebohm A History of British Birds with coloured illustrations of their nest and eggs' 1893, made the following notes of his encounters with these little birds in Europe. " In the southeast of Holland at Valconsward,and in the south west of France at Arcachon, you may travel for miles over the countries forested landscape. These forests are the paradise for the Crested tit. I spent the summer at Valconsward and a winter at Arcachon,and in both districts I was struck by the abundance of this handsome little bird. It is not only the commonest species of the Pine forest,but the commonest bird."

" They are active,flitting from branch to branch, running over the Pine cones in search of insects,and they seem to have taken a leaf out of the book of their associate the Tree Creeper**, and may often be seen on the trunks of Pine trees where they search for insects in the crevices of the Pines exactly as the Tree Creeper does. It is ot difficult to recognize the Crested tit on the wing. In the bright sunshine which is a feature of the Arcachon winters,the white edges of the black feathers of the head of the Crested tit are generally very conspicuous during flight,and often enough when the little bird is hanging under a branch of a lofty Pine, the outline of its erected crest is easy to be seen against the sky"

Meyer 'Coloured Illustrations of British Birds and their Eggs' 1894, states, " In their habits these birds appear less influenced by the successive changes of the seasons than other of their tribe,and are consequently more settled and the migratory flights,when they do take place,more limited. When they are participating in these migratory journeys they are restless,passing hastily from bush to bush"

Meyer also alludes to the captivity of these birds and gave the following advise. " If these birds are caught and it is designed to keep them in confinement, they ought to be placed several together in a cage,as they are fond of company. When caged, mountain ash and juniper berries as well as hemp seed may be given to them and they require much water to drink and to bathe in" 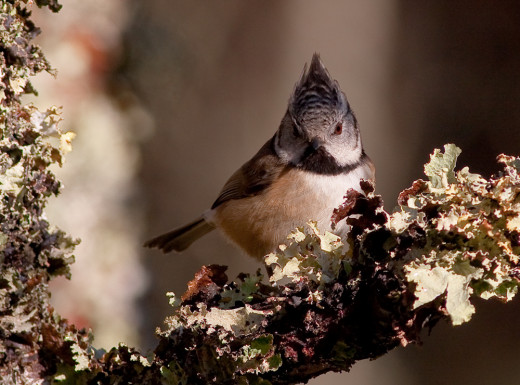 Originally posted on Flickr uploaded to Commons by Snowmanradio. Taken in Aviemore Scotland.

The nest of this species is composed of grass,moss and very often lichen,and feathers,and doubtless any soft materials, is placed in a hole in a tree. It is carelessly put together. Mr. Hewitson {1800's} examined a nest he had 'scooped out' he wrote," When trees are felled in the forests, their trunks are left standing about two feet above the ground,and in decayed wood of one of them contained a nest in such a situation that would have been chosen by the Coal tit**"

There are archaic records that suggest the bird cuts out a hole in sound trees, though this is very unlikely considering the birds tiny beak. Thus the species relies on decayed or decaying parts of the tree to make a hole for its abode.The eggs which number from five to six are deposited by the female. They are of a white colour speckled and spotted with a purplish red,mainly at the large end.

They are incubated by the female for thirteen or fourteen days and they are ready to fledge in a further twenty to twenty five days. The young birds in the nest are said to have a rudimentary crest. The chin nearly black, the throat is grey. The breast a dull white mixed with grey,as are all the under parts.

The young birds before their autumn moult have a small crest, the black round the cheeks imperfect and the collar hardly visible. The chin is nearly black, the throat grey. The breast is a dull white and all the underparts are mixed with grey.