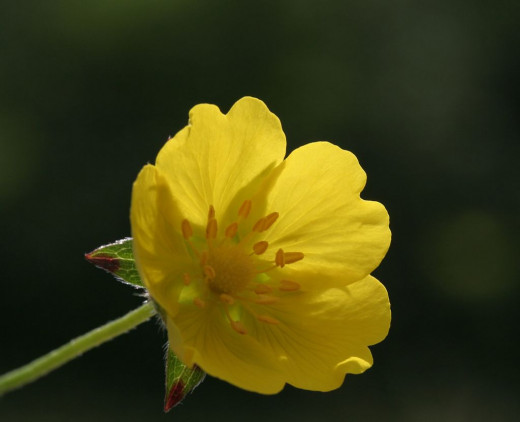 The creeping Cinquefoil belongs to the Rosales order of plants and the family Roseace. It has been allocated the Genus name of Potentilla which derives from the Latin potens ,meaning powerful and alludes to the medicinal uses by some members of this genus. The specific name of reptans indicates creeping. The common name of this species cinquefoil derives from two words that mean five leaves {leaflets}.

Here we look at this species that produces buttercup like flowers and pretty foliage. It is native to Europe as far north as Sweden it has been introduced elsewhere. On some parts of the continent it has been used in the tanning of leather. The external or cortical parts where employed which was said to impart a fine grain to calf leather.

As always we will commence with a description of the subject under review. 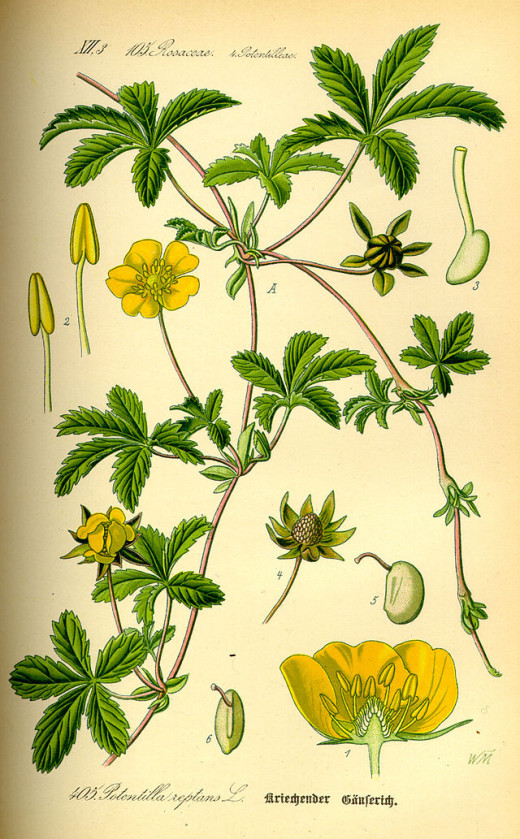 The root of this species is perennial, long ,tapering, cylindrical with a few fibres, externally of a yellowish or reddish brown colour. The stems are numerous, slender, long and prostrate, which readily root at the joints which aids in the spread of the plant .It quickly becomes established. The runners which are similar to those produced by the strawberry can reach four to five feet long in favourable conditions. They can become a nuisance weed if they get into lawns.

The leaves are opposite, quinate {five} but sometimes seven leaflets of unequal size that are obovate, serrated and hairy. The flowers are produced singly on long slender stalks. The calyx {sepals etc} is divided into ten segments ,five of which are alternately smaller and exterior to the rest and frequently recurved. The corolla {petals  etc} consists of five yellow petals inserted into the calyx by short claws.The stamens number about 20 with short tapering filaments, tipped with roundish two-celled anthers.

It is common in meadows ,pastures and roadsides flowering from June to the end of August

Runners are long and root at intervals.

It is for the lover of wild flowers, that they are beautiful and they deck the waysides that the nature lover delights to wander. It revives old thoughts of green fields and clear streams and waving boughs and the blue sky bending over all.

Of the many species of Potentilla that grows in the UK ,the creeping cinquefoil is the most frequently met with. Its stems take root at the joints creep over the meadow, pasture and among hedge bottoms, the soft velvety yellow flowers and a great profusion of leaves. Long before other hedgerow flowers,with the exception of the chickweed and daisy, its graceful foliage may be encountered among the grass, even as early as February if the winter has not been to severe.

This little yellow 'rose' is much visited by flies, beetles, bees and butterflies for honey and pollen, however ,self fertilization is easily effected. They are very similar to the flowers of another well known member of the genus the Silverweed, Potentilla ansernia, but the foliage of the latter is very different in form and colour.

The petals of the cinquefoil usually number five but there are always exceptions to the rule. In his book Familiar Wild Flowers E.Hume says on the subject " Out of one hundred blossoms that we picked as a test, eighty had the parts of the corolla and calyx and epicalyx in fives, while the remaining twenty were in sixes. The blooms of cinquefoil as with other species such as the daisy close their petals at night.

During the Middle Ages this plant was regarded as being a protection from witches and was used in a witches's ointment.. There are examples in some countries, such as France, of the plant being carved in churches dating from the 11th century. During this period of our history a protective charm could be produced by picking a perfect specimen leaf which was pressed in a bible. The leaf was then hung over the door of the bedroom to protect the occupier, and, bring a restful sleep. the plant also acquired many country names such as the Five-leaved grass and even found its way into the hearts of poets.

" But flowers, how many own the mystic power

With the leaves ever making up the flower?

Of flowers-the five leaves make all for which I stoop" { John Clare}.

The species has been introduced to North America and has now naturalized in a range that extends from Nova Scotia all the way to the Province of Ontario in Canada and southwards to Virginia in the eastern USA. 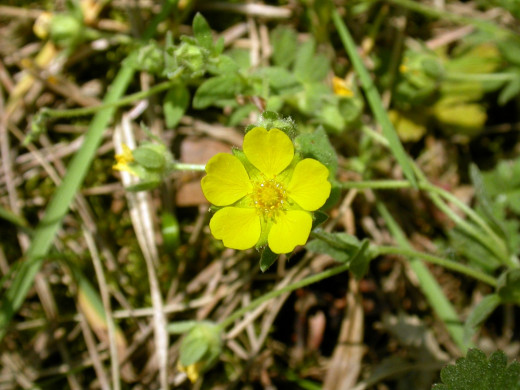 Past medicinal Uses and Historical Observations.

The roots of Cinquefoil have a slightly bitter styptic taste ,and give out their astringent matter both to water and spirits, in this respect they resemble the Tormentil, Potentilla erecta, but is regarded as less powerful. In the times of the Ancient Greeks, the roots were much used in intermittent fevers ,the efficacy of which was alluded to by Hippocrates.

Ray { Ray.Hist. Plant.tom i page 610} asserts that the peasantry of his time used it for the same purpose. Senac bears testimony also on the same point ,a drachm of the powder in one ounce of wine was taken just before paroxysm. However, it seems, by the 1800's Cinquefoil was hardly ever used by herbalists to treat fevers, but it was still employed as a remedy in all diseases where astringents {binding properties} were deemed necessary, particularly in diarrhoea and dysentry,spitting of blood, bleeding at the nose and in profuse menustartion or 'flooding'.

The French {Flora.Economique page 450}, herbalists and physicians also reputed it to be valuable for catarrhous affections,coughs  ,jaundice,calculi and ulcers in the kidneys. Externally the expressed juice of the fresh root,or a strong decoction was sometimes 'usefully employed' in chronic inflammation of the eyes, and the latter in foul ulcers of the mouth and throat, scorbutic state of the gums, and all malignant ulcers.

The leaves of Cinquefoil possesses the same qualities of the root, but much weaker. The cortical part of the root was taken from a scruple to a drachm at a dose. To make a decoction of Cinquefoil one ounce of the root was covered by one and a half pints of water, boiled gently until reduced to one pint. This was used externally in all ordinary cases, the dose a quarter of a pint twice or three times a day.

In the times of Elizabeth the first, they were thought very highly of. One of the herbalist described the species in great detail and called it Cinquefoil or five-leaved grass ,recommended to his readers to give twenty grains of it either in white wine or white wine vinegar and states," When you shall very seldom miss the cure of an ague, be it what ague soever,in three fits, as I have proved to the admiration both of myself and others, let no man despise it because it is plain and easy,the ways of God are all such"

The distilled water of the leaves seems to have been a popular preparation and the author goes on to add-" if the hands be often washed therein, and it be suffered every time to dry in itself, without wiping, it will, in a short time help the palsy or the shaking of them" 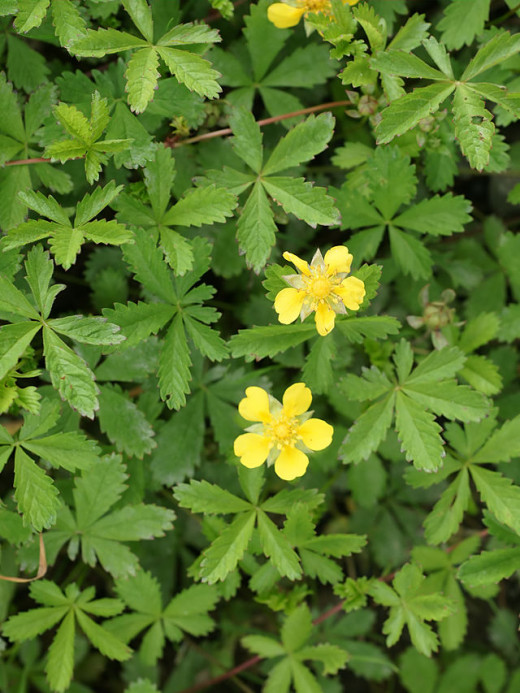 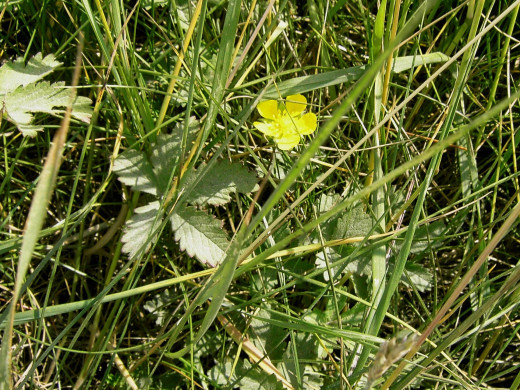