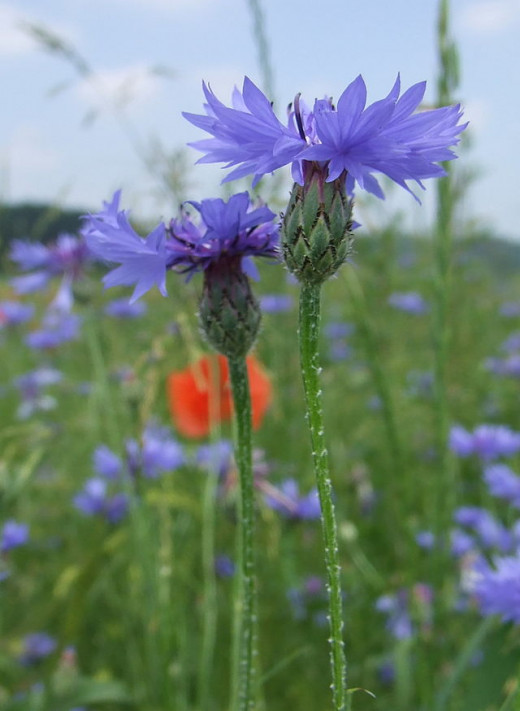 The Corn flower belongs to the order of plants known as the Asterales and the family Asteraceae within that order. It has been allocated the genus name of Centaurea and the specific name of cyanus.

It is a plant that once grew abundantly in corn fields which they embellished with their brilliant flowers,which appear in July and August. The name of Centaurea is said to have derived from the Centaur Chiron,who, with some plants of the genus, was fabled to have cured himself of a wound made by Hercules. It is called cyanus from its blue colour {azure} from the Greek Kuaveos.

Several varieties are cultivated in gardens,with white and purple flowers, but they must all yield to the beauty to the denizens of the fields. The flowers are edible and they are also used as a food colouring. Apart from it being a favoured garden species, this species has a long history of use in herbal medicine. Here we look at this beautiful flower and its past history along with notes from past herbalists and other eminent writers. As always we commence with a description of the subject under review.

Illustration of the basic components of the corn flower. 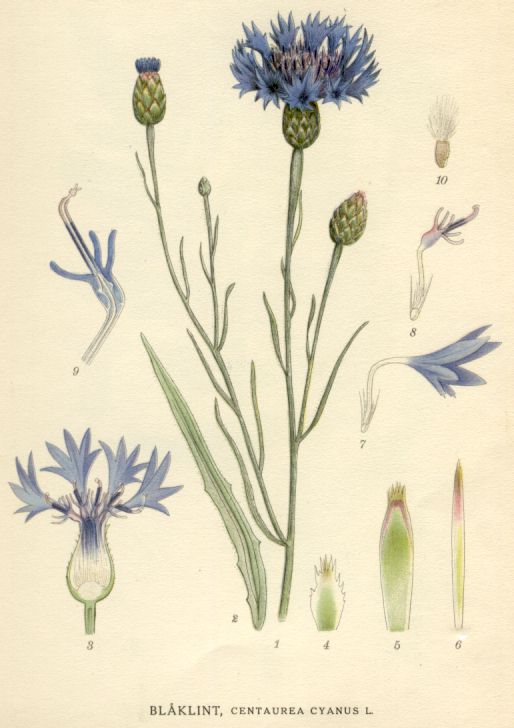 Description of the cornflower

The root of the Corn flower is annual,rather woody and fibrous. The stems are slender,branched ,striated,covered by a loose cottony down,and attain the height of two feet or more.The leaves are alternate,long and straight,of a light green colour,somewhat cottony,especially so beneath. The lower ones are generally toothed towards the base,the upper ones are linear and entire.

The flowers are terminal,capitate,tubular and five toothed,the receptacle bristly. beneath the flower heads there are scales of a greenish colour,their margins purple. The ray florets which make up the flower head are large and azure coloured,funnel shaped,while those of the disk are small and of a purplish colour.

The Corn flower, the Bluet of the French and the Korne-blume of the Germans,is of so brilliant a hue,that we often use to see its beautiful tints contrasting so well with the rich brown ears of the corn during the months of July and August.

In some parts of Europe it is still a common enough sight. Sadly here in the UK and other countries they have all but disappeared with the use of weed killers and the ploughing up of the stubble fields before the winter has properly begun. It was also a familiar sight to anyone accustomed to ramble among the fields and the lanes of our land.

Some believe the specific name of cyanus derives, as previously stated, from a Greek word meaning blue {azure}others claim it derives from poetic fables which tell of the youth Cyanus,who spent hours in the corn fields,weaving the blossoms into garlands and admired them above all others.

Many a country child even as recent as fifty years ago may have been encountered sitting by the waves of corn, binding the flowers into their nosegay.German ladies often placed them in their hair,and they bestowed upon it many pet names.

Although the gardener utilized its beauty in his flowerbeds, it could never look as enchanting as when growing in the wider countryside growing among the golden ears with the poppy and scabious as companions. It has been allocated some quaint country names over the centuries such as 'Blewblaue' and 'Blue blewbottle', the name of Corn Bluebottle, is still associated with the plant today

.Gerarde, Herbalist,1500's, refers to it as the Hurtsickle.Though the brilliancy of its flowers make it an attractive plant to the lover of natural beauty,the farmer regarded the plant as a pernacious weed to be carefully eradicated on sight. The reapers of former times bore it no good will for its tough stems blunt their sickles hence Gerarde's 'hurtsickle'. On this subject this poet wrote the following scathing lines--

And thy complexion challenges my praise,

They countenance,like summer skies is fair;

But,ah, how different thy vile manners are.

Ceres for this excludes thee from my song,

And swains,to gods and me a sacred throng.

To th' inhospitable field where thou dost spring.

Thou blunt'st the very reapers sickle, and so

In life and death becom'st the farmer's foe"

Farmers in days gone by were accused of neglect if weeds such as the cornflower was gazed upon by his neighbours. Holditch, and old writer, in his 'Essay on Weeds', includes this plant in his denunciation of the poppy,mayweed and the corn marigold and says " The above class,with their gaudy colours,proclaim bad farming to the Landlord, the tenant and the passenger,and announce the neglect of using clean seed-corn, judicious fallowing, and horse-hoe husbandry"

In Scotland it was referred to as the Blue-bonnet and in Kent {southern England} it was commonly known as Blue-cap.

" From the first time the spring's young thrills are born,

I roamed the fields about, a happy child,

And bound my posies up with rushy ties,

Professor Rennie, remarked of this flower when writing of the power of smell in insects," We have observed that butterflies, though far from being voracious feeders,will often dart down from a considerable height upon a flower beneath their track.This struck us more particularly in a narrow garden at Harve-de-Grace,enclosed with stone fifteen feet high; for the butterfly passing over it omitted to descend for the purpose of visiting the flowers of Alpine bluebottle,Centaurea montana and Centaurea cyanus,who's smell,however,to our organs was far from being powerful enough to be perceived at the distance of one foot, much less fifteen or twenty feet as it must have been by the butterflies, for we often saw the painted lady alight there." 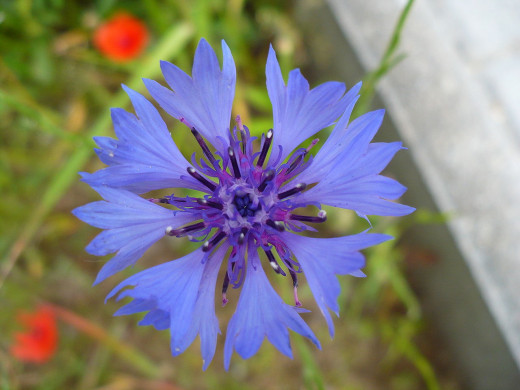 Past uses and historical notes.

According to the British Flora Medica {page 81}, "The introduction of this plant and a few others among the medicinal plants,may perhaps be reprehended. Therefore it is well to state, that they are admitted partly on account of the interest that attracts them as relics of a by-gone age,and because some of them are still used as empirical remedies, with the real nature of which it is expected to be acquainted. Moreover,the Cornflower is the only example that can be selected from the British flora of the Botanical order to which it belongs"

The author goes on to state "The Cornflower was reckoned by the credulous of former times,antispasmodic,aperient and diuretic and contributed to swell the catalogue of wound herbs being applied to contusions,wounds and bites of venemous beasts."

Ray mentions that the powder is of the 'utmost service' sprinkled on affections. A famous collyrium called in France Eau de Casselunette,was made from the flowers;and the distilled water is not yet banished {1800's} from the Parisian Codex, which directs it to be made from one pint of the flowers and two pints water,distilled to one part and a half.

The Eau de Casselunette, or Break Spectacle water, was deemed an excellent remedy in all cases of chronic inflammation of the eyes and dimness of sight.

Culpeper,1653,-" As they are naturally cold,dry and binding,so they are under the dominion of Saturn. The powder of the dried leaves of the Bluebottle or Cornflower, is given with good success to those that are bruised by a fall, or have broken a vein inwardly,and void much blood at the mouth,being taken in the water of plantain,horse tail or the greater comfrey, it is a remedy against the poison of the scorpion,and resists all venoms and poisons. The seeds or leaves taken in wine, is very good against the plague and all infectious diseases,and is very good in pestilent fevers. The juice of the plant put into fresh or green wounds,doth quickly solder up the lips of them together,and is very effectual to heal all ulcers and sores in the mouth" 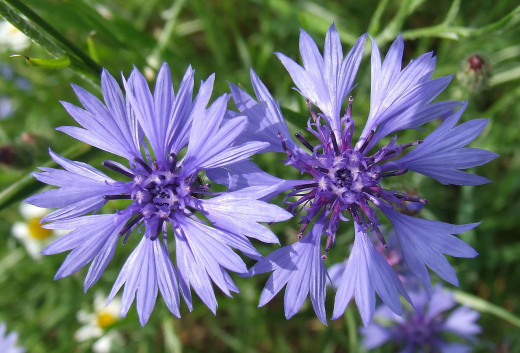 Corn flower tea is used to treat fever,constipation,water retention and chest congestion. It is also taken as a tonic as a liver and gall bladder stimulant. Some herbalists apply Cornflower in the form of an eye wash.

In the Cornflower is often used to colour herbal teas. The parts used in medicine are the flowers,leaves and seeds with the petals being most frequently employed. Modern day science seems to dismiss the value and effectiveness of Cornflower as an eye wash,and also doubt its effectiveness in the treatment of fevers.

Cornflower extracts are used in conjunction with other herbs in many herbal preparations including those to treat itchy scalps and other skin afflictions. The Cornflower,again,with other herbs are also used in pain relief creams and gels and in some sun screen lotions. The flowers are said to be rich in mineral salts and contain a bitter ingredient known as pectin.It is rich in calcium which help to keep bones strong,it is rich in vitamin C,folic acid and other compounds that help to detoxify the body.

They also contain biotin that helps to strengthen nails and helps to prevent or heal nail infections. It is utilized in hair and skin care products. It is said to have a calming affect and so employed to treat anxiety,depression and other nervous disorders.

Corn flower and the garden

Gardeners of the past brought this species from the fields to the garden beds. With skill and care of horticulturists cultivars were created that produced more florets and varied the hue of the flower. Gerarde {1500's} tells us that it was often sown in gardens and by " Cunning often times become of other colours and also double"

Modern day gardeners have a variety of cultivars to choose from. The cultivated Centaurea cyanus is a fast growing upright, branching annual that attains the height of 24-36 inches {60-90 cm} and needs to be spaced about nine to twelve inches apart. They thrive best in full sun. They vary in colour of the flower from light blue,medium blue,white or near white, blue-violet or pink. The flowers appear late in spring to early summer,and some varieties will flower from summer into the late autumn.

C.dealbata is an erect perennial which can attain the height of three feet {90 cm} and a spread of two feet {60 cm }. They produce lilac-purple flowers which are borne freely in summer one or more to each stem. They have narrowly oval,finely cut,light green leaves,the variety 'Steenbergli' grows to about two feet {60 cm }and has Carmine-lilac flowers.

C.macrocephale is a clump forming perennial up to three feet {90 cm } or more. They have stout stems in summer bearing large yellow flowers heads enclosed in papery silvery brown bracts. The foliage is of mid green in colour and narrowly oval and deeply cut.

C montana is a spreading perennial with many rather lax stems in early summer. One or more large purple-blue,white or pink flower heads with thistle like centres encircled by star-shaped ray petals. They grow fifty centimetres {20 inches } tall and have a spread of sixty centimetres {2 feet}. 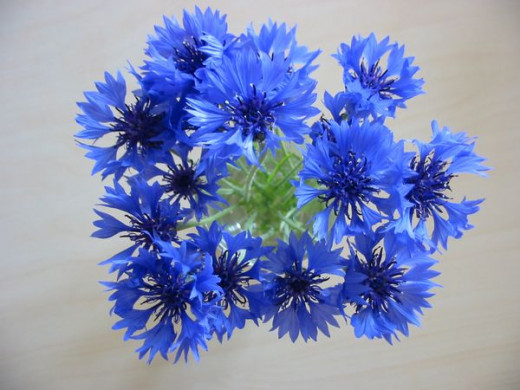