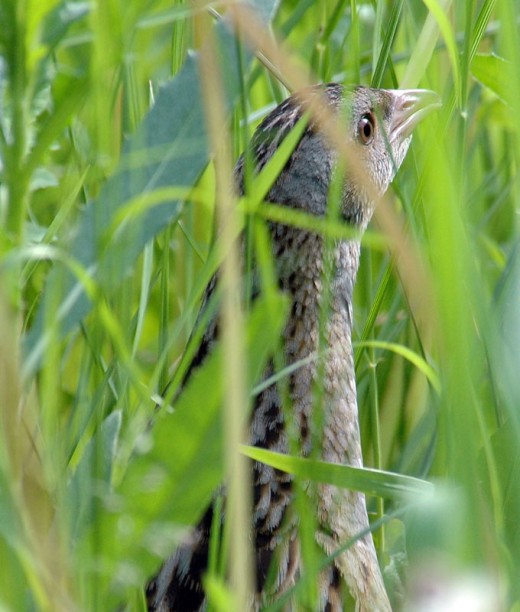 The Corncrake sometimes referred to as the Landrail,Crex crex, belongs to the order of birds known as the Gruiformes and the family Rallidae within that order. In the UK they are placed on the Red list of conservation concern {declines of 50 % + ,over the last forty years or so} with an estimated 1200 males calling in summer. This often the only signs of their existence. Red listed species have a Species Action Plan {SAP} formulated and implemented under the UK Biodiversity Action Plan {BAP}. The lead partner in the UK is the RSPB. {Royal Society for the Protection of Birds}.

They are also Red listed in Ireland. due to severe declines in breeding populations. In Europe they are 1 Global conservation concern -depleted. The total European population size is estimated at between 300,000-500,000 pairs. Populations vary from country to country and there follows a few selected examples.

The birds breed in Europe,north and central Asia and winters in southern Europe to South Africa. They are birds of grassland and thickets.

Here we review this declining species and as always commence with a description of the subject under review. 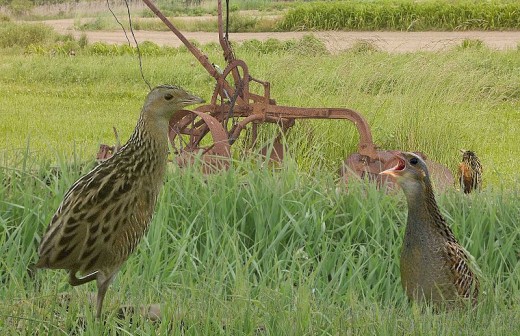 Description at a glance-They are shy and secretive birds of hay meadows and other grassy places. The adult shows a brown ,streaked crown with blue grey cheeks and a chestnut eye stripe. The breast is buffish-grey with chestnut smudges on breast side.

The flanks chestnut,white and thick black barring fading on the under tail. The wings are bright chestnut,striking in flight. They have a short bill,the legs are yellow brown. they prefer to run through thick cover and they drop quickly back into cover when flushed. The flight seems weak and flopping. They have a large chestnut patch on wings and dangling legs are distinctive in flight. They are chicken sized birds 28 cm long and weigh -male 170 grams female 140 grams.

Description in more detail.- The bill of this bird is pale brown at the top and along the top of the upper mandible,the base a pale reddish yellow colour as is the lower mandible beneath. The iris is yellow brown. Over the eye is a greyish-ash coloured streak,blending with the colours on either side ,and so going down to the neck.

The legs and toes ,which are a pale dull yellow,with a hint of reddish brown or grey. The female is not quite so large. The head on the sides have less grey and not so clear. The greater and lesser wing coverts are not as bright.

Natural habitat of the Corncrake. 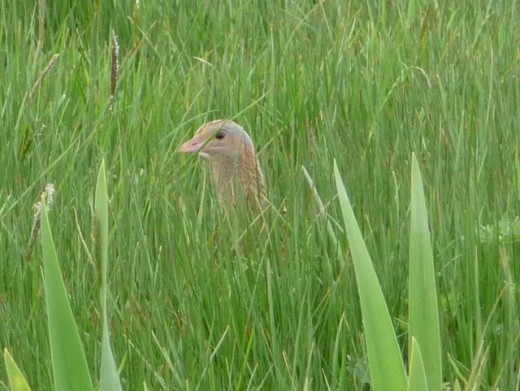 The 'kerrx-kerrx' sound of the Corncrake has been compared to two cheese graters being rubbed together,it is a monotonous call. Corncrakes stand with their head held high and beak wide open. The name itself is a bit of a misnomer for the birds seldom nest in corn fields. They usually choose long grass and among tall weeds and damp places for the location of the nest {see breeding below}.

Corncrakes are related to the Rails,Coots and Moorhens,but differ from those birds in that they live on dry land . Most of the time they live hidden in tall vegetation and are only betrayed by their rasping calls. They are summer visitors to the UK and our birds migrate to Africa for the winter. Today they are only found in western Scotland ad the western Isles of Scotland. They arrive in the UK from mid April and depart again in August and September.

The scarcity of Corncrake {see conservation UK below } has only occurred in the last sixty years or so and records reveal the Corncrake was once generally distributed across the whole of the UK. It once frequented cultivated districts and low-lands and once seemed to show a preference for Clover fields. It has always been a shy and secretive bird endeavouring to avoid observation and its plumage colouring allows it to pass through tall herbage to achieve this aim.

Butler 'British Birds with their nest and eggs',1898,reveals that " In many districts the Landrail are exceedingly common in the early summer when they first arrive after migration. But it is remarkable that very few are acquired in the shooting season,which is accounted for by the fact that a very large number of eggs are destroyed by the mowing machines,and also by the difficulty of making the birds take to wing out of Clover and standing Barley,which is generally found in September."

Lord Liflord seems to confirm this he states " It is remarkable that though with good dogs there would be little difficulty in shooting from twelve to twenty Landrails in our meadows in a few hours in early May,it is very seldom that our total bag of these birds during the shooting season has reached a dozen"

Notes On Confinement and Man.--- The Landrail it would seem was frequently kept in confinement ,and thrived perfectly if in a large aviary,becoming exceedingly tame and dangerously aggressive to the other birds. if captured as occasionally,they were, by a dog and brought to the 'sportsman' they were said to feign death,and waited for an opportunity to escape into the long grass."

Though they are reluctant to fly even when flushed,their powers of flight ,when once on the wing, are quite strong,as is proved by their annual migration,and occasionally when repeatedly flushed,they will rise in the air and pass away at some considerable height,with a speed equal to that of a wild duck.

One archaic writer states that " This is exceedingly good for the table,and as such has come under the protection of game laws. Thirteen couple { brace} have been known to be killed in one day in Devonshire,sixteen couple in one day in Sussex,and seven couple at the same place the following day"

Old Drayton, in the 'Polyalbion',quaintly remarks of the 'Rayle', ", That it seldom comes but upon the rich man's spit,and two are said to be a present for the Queen,but any very great value must not be put upon such legendary assertions,for we have must have heard,and doubtless at the time did hear it,believed, that 'four and twenty blackbirds' made a 'dainty dish' to set before the King. Certain,however, it is that the bird before us is of a very superior "quality.

Eggs of the Corncrake. 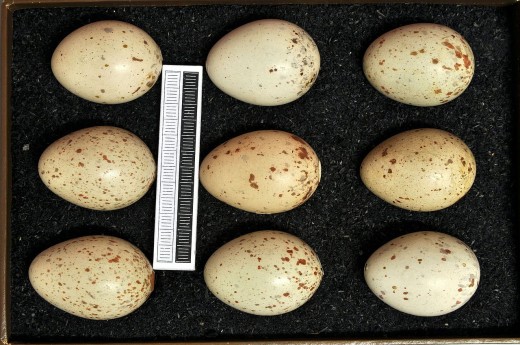 Corncrakes breed in their first year.Once the males have reached their breeding grounds and selected a patch of suitable habitat,they start to call to attract a mate. Once the male has attracted a female and mated he will move some distance away and call to attract another mate leaving his first partner to incubate and rear her young alone.

The nest is on the ground concealed in vegetation. It is a shallow cup lined with dead leaves of the surrounding materials. Living stems are pulled over to form a loose canopy. The female will deposit eight to twelve grey-green blotchy eggs,a single egg being laid each day. She will only commence the incubation when the last egg is laid,so that the chicks will hatch all at the same time. The incubation period is about 16-19 days.

The young when hatched,are in a rich black down. They are very active immediately and begin to search for insects on the grass stems and clustering around their mother in the same manner as chicks around a domestic hen. She will continue to feed and protect her offspring until their independence is attained {usually thirty four to thirty eight days} The bond between the mother and her chicks is in the first instance very strong,however,it is short lived. When the chicks are self sufficient she will leave them to fend for themselves and she will attempt a second brood. The young of the second brood tend to stay with their mother for a little longer than those of the first brood will do.

illustration of Corncrake with chick. 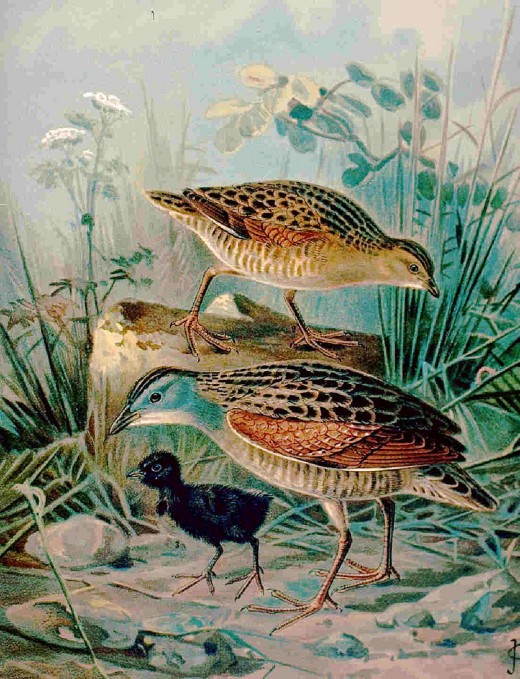 This is another species that was doing quite well until the advent of intensive farming, when numbers dropped dramatically,not only here in the UK but across its entire range. Research into this decline indicated that effective conservation methods should include increasing the area of sufficient tall vegetation in spring and autumn as well as in mid-summer.

It is estimated that 60% of chicks perish by the usual mowing method, because they are reluctant to run across fields that are already mowed,probably an instinct that kicks in to keep them safe from natural predators. Chicks are also at risk from mowing the grass several times before they can fly as successive fields are mown. It is known that alternate mowing methods reduce this risk substantially.

In the 1990's several Nature Reserves were procured by the Royal Society for the Protection of Birds {RSPB},and they were managed sympathetically {CFM} to the Corncrakes needs. These reserves now hold an estimated 8% of the national population. The population is slowly being increased. The two main factors being as previously mentioned,sufficient tall vegetation from spring to autumn and delayed and alternative mowing. This made possible by the RSPB reserves and funding which helps farmers to create Corncrake friendly habitat and the management thereof.

Also see State of Birds 2017 in content banners above.