The Corn cockle in the UK, has become a rarer flower than it was in the  pre-intensive farming days.  However, it is still readily available in wild flower seed mixtures.

It takes its common name from its long past use in the making of ' Cockle bread'. It has been given the genus name of Agrostemma, from the Greek Agros meaning a field + stemma = a garland, they were popular in garlands in days gone by. the specific name is githago.

They are placed in the family Caryophyllaceae within the Order Caryophylles, and they are closely related to the Campions.

Illustration of the corn cockle 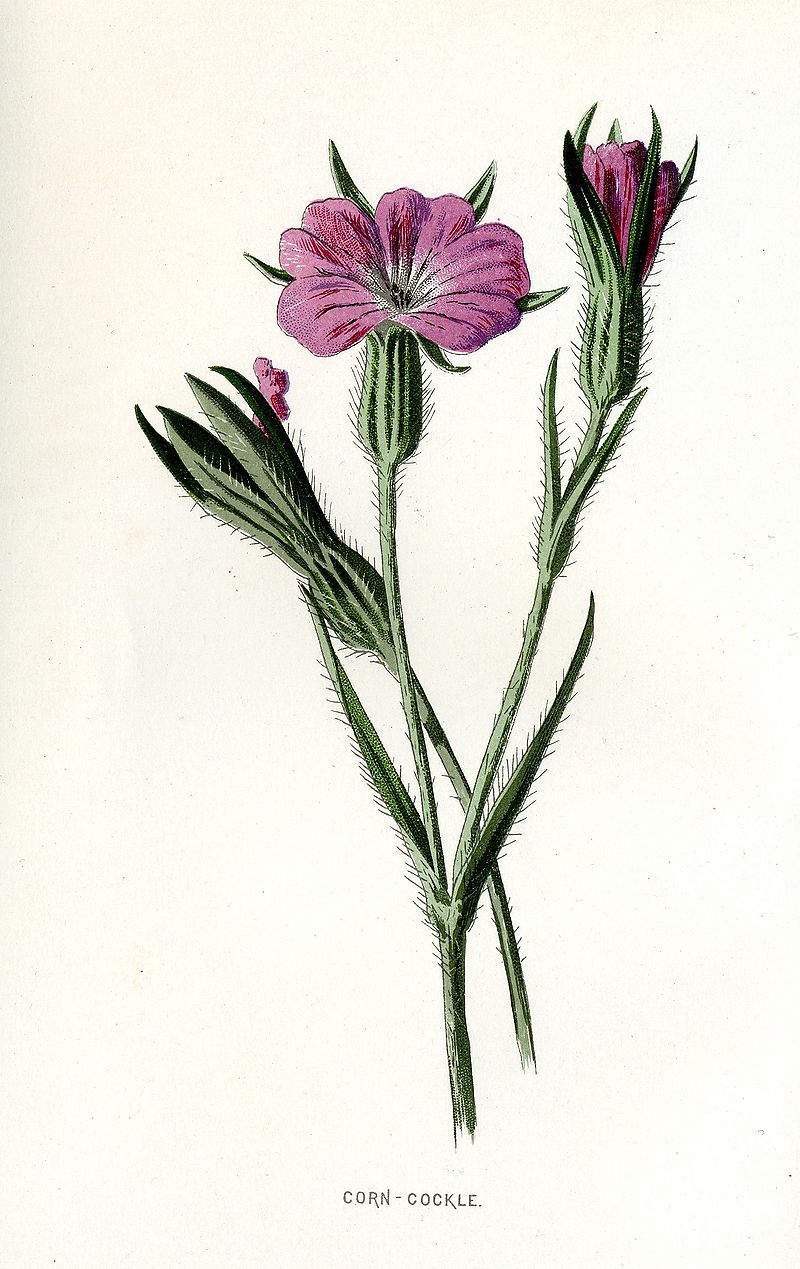 It was once a well known corn weed, with large entire purple petals. It is an annual herb of the pink family. The tall , slender stems  are two to four feet high { 60 120 cm}, have a dense covering of white hairs. The narrow lance-shaped leaves , four to five inches [ 10-12.5 cm ] long, are produced in pairs and the bases meet around the stems. The leaves are hairy and well spaced along the stem.

The large , solitary flowers have very long stalks, which are produced from the axils of the leaves, they are one to one and a half inches { 4cm-5 cm } wide.. The purple petals have paler streaks which are honey guides to pollinating insects such as moths and butterflies.. These show the insects the way to the mouth of the tube. The most striking feature of this species is the woolly calyx [sepals etc}, which distinguishes it from the related campions. It is composed of five strong ridges, and five long green teeth which are much longer than the petals. These are utilized by butterflies and moths which use them to alight upon before pollinating the flowers.

The nectar is located at the bottom of the tube it is so deep down that it makes it difficult for bees to pollinate them. They are encountered in bloom from June to August and then are succeeded by a large , oval capsule which is opened by five teeth, the capsules contain about a dozen large black seeds. The seeds which contain a toxin was once a great problem  for the millers for they got into the flour and so, eventually, into the family bread.

The plant is encountered {where it still exists} in unimproved corn fields, and in other crops which are cultivated sometimes escaping into the wider countryside.

Corncockle, much rarer than it used to be

Corn cockle was once used in medicine but is a very dangerous plant as it contains poisons. it should never be used in any home made preparations and never taken internally.

Corn cockle in the garden

In the garden this is a lovely flowering plant that enhances its location in any border. It is easy to grow and so suitable for the beginner. It is a  hardy species which requires a sunny position in well drained soil it thrives best in chalky or alkaline soil.

It may be sown directly into the border in spring or sown in pots in the autumn to be planted out in the following spring. They flower from June until August.

Public domain courtesy of the USDA data base.