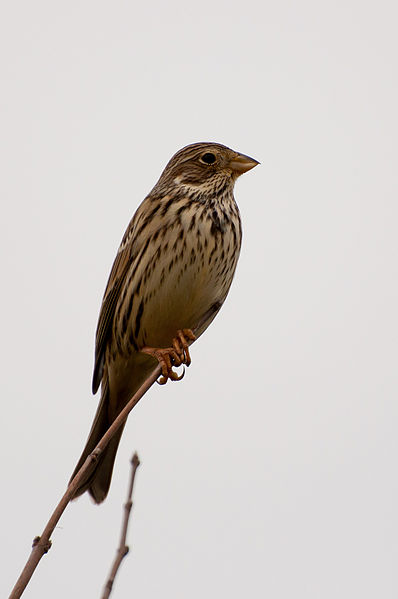 The Corn bunting is a a farmland bird in the UK and in common with many other farmland species, the bird is suffering a rapid decline in numbers here. because its population /distribution have declined by over 50% in the last forty years or so it has been added to the Red List of conservation concern, and, as such there has been an Species Action Plan , formulated and is currently being implemented on its behalf. { see Biodiversity Information below}. The latest population figure for the species is 10,000 pairs in summer.

In Europe it is a bird of conservation concern again because of population decreases the estimated population in Europe is between 7.8 and 21.7 million. However, because of its very extensive range and despite the declines it is still classed [at the time of writing} as of least concern globally on the IUCN list.

In Ireland it is currently classed as extinct as a breeding bird and is now only seen as a vagrant. It was once a widespread resident in lowland agricultural areas.

The corn bunting belongs to the Passeriformes order of birds {perching birds} , and given the species name of Emberiza comes from the German Embritz indicating a bunting and the specific name of calandra is named after the Calandra lark. It is a bird of Europe, south west Asia,and north west Africa. it is a bird of scrub grassland and farmland.

Here we review the species with evidence of past ornithologists, we look at the lifestyle and the uncertain future of the species along with its breeding habits . As always we start with a description of the bird which is the subject of our review.

One of the principle characters of this family of birds is the bill, which is very strong and conical, the upper palate having a strong notch on the palate, once commonly referred to as a ' tooth ' and the sides of the mandibles bending inwards. They are of a yellowish horn colour.

The bird is about 18cm {seven inches} long and of a somewhat thick, bulky appearance. The wingspan is about 29cm {eleven and a half inches} and the male weighs around 53 grams and the female 41 grams. The plumage of this bird is varied and pleasing. The iris is dark brown, over the eye is a faint mark of pale yellowish grey which is continued in a curve down the cheek. The head, crown and back of the neck are a light yellowish-brown, inclining to olive, and the center of each feather is streaked with dark brown

In front the feathers are marked with triangular spots being larger and darker on each side where they form a line. The chin, throat and breast are a dull white colour in summer, and in winter a yellowish brown, marked with streaks or elongated spots of dark brown, which are much lengthened further down the body.

From a distance they look basically brown streaked darker. the sexes can not be distinguished in the field. Young birds tens to be lighter than their parents, and the dark markings on their breast and throat are more lengthened.

In relation to its body size the wings are medium length, as is the tail. The neck is short, bill short and the legs short to medium. The flight is direct and bounding, sometimes with legs dangling . It hops and occasionally runs.

They can be told from all other nondescript brown birds by its larger plump size and with no wing bars to break up the uniform colour. It is the only British land bird that sometimes dangles its legs.

Illustration by A Thornburn. 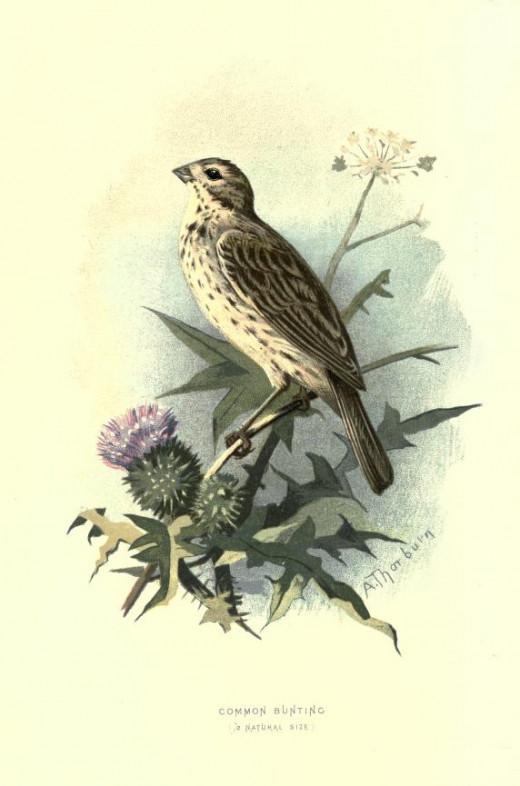 Historical observations of the corn bunting.

According to Dresser { 1800's} the bird was then referred to as the Common Bunting} it was a resident of Europe, but did not range very far to the north in Scandinavia. It extended to the east in Turkestan and central Asia.

Mr. j.H. Harvey, wrote, " As the summer days drew on the Corn Bunting becomes rather abundant at Greatham in Durham {North East England}. The first are generally seen about the 13th of March, and the following month small flocks of them begin to appear, but during the winter not a bird is

Mr. H.M.Labouchere conveyed that 'the bird is not very common in Holland and has only been found breeding in some of its provinces. In Autumn it visits the country on its yearly migration, but never in large numbers, Mr. Irby says that this species, which he knew as Triguero { wheat bird} is resident and excessively abundant in Andalucia. This seems to be borne out entirely by Mr. Howard Saunders, who wrote " It is, I think, the most abundant bird in Andalucia, the numbers being brought into the market equaling that of all the larks, sparrows and thrushes, put together"

Dr.Carl Bolte conveys to us that he found it common in the rich wheat fields of Rodelos, in the interior of Teneriffe, while Mr. Irby found it just as abundant in Tangiers as it was in Spain. Locke, says that " In Algeria it is very common and amongst the Arabs bears the name 'Derris', its flight is rapid and noisy and it is very shy, it frequents the plains and marshes, which it is often observed in large flocks" seen. I have no doubt they breed there"

The bird was tolerably common in most parts of the UK, but was always found in certain localities in much greater numbers than others. As well as the common names of Corn bunting and Common bunting it was once also referred to as the Bunting lark and the Cod bird. Corn bunting alludes to the fact that it loves the cereal seeds as food, thus it was not regarded with popularity by England's farmers.

Its note is uttered both when the bird is flying or when it is perched and was said to resemble the words 'chuck or chit'. This is repeated several times in a harsh, unmelodious key, and can be heard for some considerable distance. The bird has an extremely quarrelsome disposition. In spring and summer these birds are seen singly or in pairs, but in the cold weather they congregate in flocks with other birds of a similar size, habits and whose food corresponds with their own requirements.

The diet of this bunting as previously mentioned consists of corn and other grain seeds, insects and grubs. It always seemed to be a healthy bird and was once relished as a food, considered to be very good for eating. Fields, particularly stubble fields {those that are left to overwinter after the harvest has been gathered}, the enclosures of farms, where once hayricks were numerous, and cultivated districts generally are the favourite haunts of this species. It may frequently be encountered ' dusting' in the manner of sparrows and larks.

Corn bunting and the Yellowhammer. 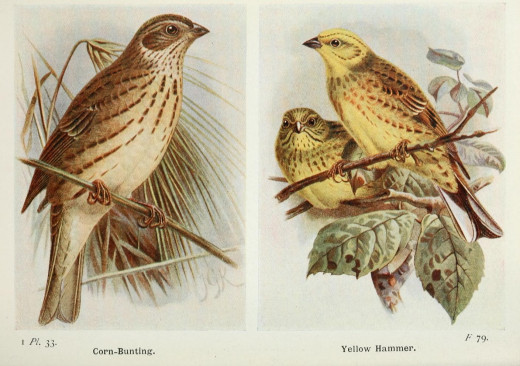 During the breeding season the male is restless and quarrelsome, continually bickering with other small species. he generally sits on some elevated perch from where he sings his scarcely musical song. During the mating season they use a call note 'zic,zic' which is a queit communication call between the pair and the young that they rear.

This bunting usually commences its nest construction about the end of April. It is located either on the ground in the middle of a field or on a banking, or in coarse herbage close to the bottom of a hedge and occasionally in a bush. The nest is composed of small fibrous roots, dried grass or hay and neatly lined with moss, wool and hair.

In the cup four eggs { sometimes five are deposited} these are of a blunt oval shape and of a whitish colour, tinged with grey-red, sometimes pale purple, and irregularly spotted and blotched with marks of a dark purplish brown.. In some instances the ground colour of the egg is almost white, but they vary in colour markings and even in size.

The incubation period is about 13 days and the task is undertaken by the female. She sits very closely and sometimes when disturbed especially if the nest contains young, she will flutter around the head of the intruder, or hop around anxiously from stem to stem. Successful young will leave the nest in eleven to thirteen days. Corn buntings may rear one to three broods per season depending on the weather and availability of food.

During the autumn, and especially the latter part of October, our resident buntings are largely increased in number by migratory flocks. In some parts of the country the bird is better known in winter than in summer. owing to its somber colouring and its habit of roosting on the ground, this species has often been mistaken for a lark and visa versa. In autumn and winter it often joins with larks in small flocks.

The Corn bunting is omnivorous and feeds almost exclusively in arable farm land, wet meadows and rough grass land. In poor weather conditions they will forage in farm yards. Insects form an important part of the diet for the chicks. The increased use of herbicides and insecticides have decreased the number of seeds for adult birds and insects for the chicks, which can only have had an adverse impact for the birds in the UK.

Corn buntings have declined by 89% between 1970-2005 here in Lancashire { north west England} the figure is thought to be 54% but the data is limited. here in my home county of Lancashire farm land birds in general are facing sever declines these include Grey Partridge perdix perdix, Skylark alauda arvensis, Yellow wagtail Motacilla flave, Tree sparrow,Passer montanus, Linnet, Carduelis cannabina, Reed bunting Emeriza schoeniclus, Yellowhammer Emberiza citrinella and the species under review.

Because of the worrying declines these birds have all been grouped together under the umbrella of a Habitat Action Plan {HAP} which aims to reverse the declines in farm land bird populations. These birds with the exception of the Yellow wagtail are commonly referred to as ' seed eaters' and they share the same ecology in winter spring and summer.

Thus the Corn bunting along with other seed eaters have three seasonal major requirements. Winter seed food. Stubbles { fields left untouched over the winter after the cereal crops have been harvested}, fodder crops, wild bird and game cover crops, some grassland swards.

Wild bird population indicators for the English regions 1994-2006 {2008} suggests an 8% increase in the north west of England {includes Lancashire} farmland compared to the all England trend of minus 7% for the same period. Of the 18 species that make up the indicator it was species such as the Goldfinch, Green finch and Stcok doves that had increases which may have contributed to the upward trend. this report does, however, highlight that the Corn bunting continues to decline in the larger region of the north west. The latest decline of Corn buntings shows a further decrease of 15% since the 1990's. And although Lancashire is considered to be a stronghold for the Corn bunting a reduction of 40% in range between 1968-1972 and 1997-2000 is reported.

Loss of uncropped field margins have reduced nesting sites for the species along with intensive grass management. The HAP aims to reverse the decline by working with farmers who have schemes available to them to farm in a wildlife friendly manner, such as the Farm Stewardship Scheme which encourages farmers to leave land with safe nesting sites for the Corn bunting.

These along with other conservation measures being implemented by several conservation bodies can only help to at least halt the declines.

Also see State of Birds 2017 in the content banners above. Click on the banner and scroll down to view.

Europe-they are a species of least concern.