The common ash Fraxinus excelsior is a tall handsome and somewhat elegant tree. The European or common ash is also referred to as the flowering ash in the U.K. There are 50+ species of ash in the Genus Fraxinus, the Latin name for the ash tree. There are also many cultivars that have been raised for gardens and parks adding greatly to the number that may be encountered. However, this species,the common ash is the only native species to occur in Britain. They belong to the olive family the Oleacaea and Britain, has but one other species, of this family which is native to Britain- the privet, which more of a shrub than a tree.

Ash is steeped in folklore and mythology of many countries. It was said that the ash tree was the only tree in the garden of Eden that the serpent would not go near, for even if just the shadow of the tree fell upon the serpent it would shrivel up and die. From this belief ash staves were carried that was thought to protect the walker from the most snake infested places. 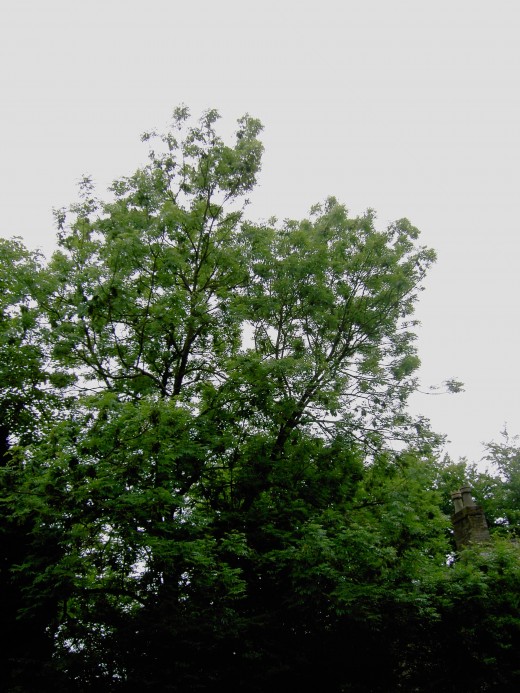 The tree is capable of reaching the height of 20-35 meters. The species name excelsior means tall. The light grey bark of the tree when young becomes browner, rough and fissured with age. The fissures becoming deeper as the tree gets older.

Components of the ash tree. 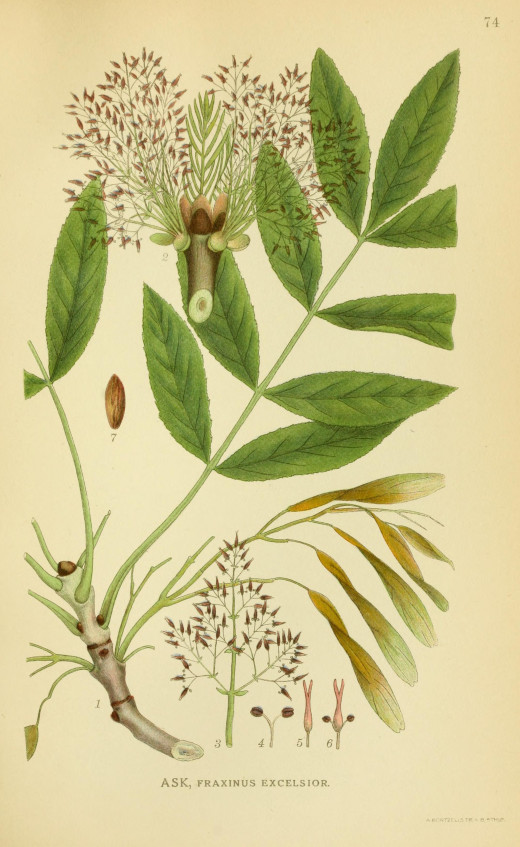 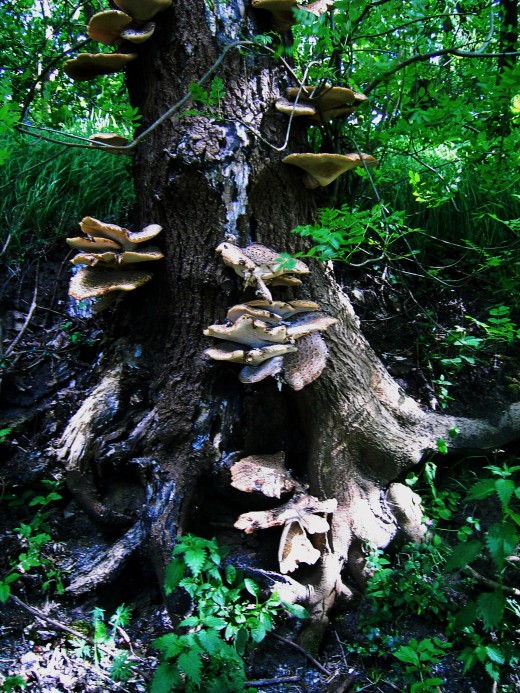 Similar leaves to the Rowan

The leaves of this tree are superficially like those of the Rowan tree { see Rowan tree}. However, when seen side by side those of this species have much larger leaflets which can number between four to eight pairs opposite to each other with a terminal leaflet. The leaflets are lance shaped and toothed about 3 inches {6-7cm} long. This gives the leaves a loose feathery appearance and the canopy of the tree an open airy habit which allows light down to the floor of the wood or grassland. 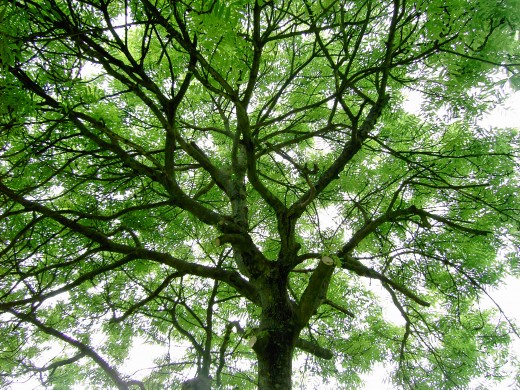 The most characteristic part of the twigs in winter is the thick sooty black buds at the tip of the twigs. close observation will reveal that there are three buds to each group. Two small side buds and a larger terminal bud. They have a velvet appearance about them. The two smaller buds contain the flowers while the larger bud contains the foliage. Nature has deemed that the flowers of this tree open before the leaves appear. This allows the breeze free access to the flowers which aids pollination.

After fertilisation the oblong ovaries develops into a thick seed chamber which has a long strap -shaped wing. These seed chambers {samara} develop into pendulous bunches which are commonly referred to as ash keys. They were said to resemble the bunch of keys carried by Medieval jailers. 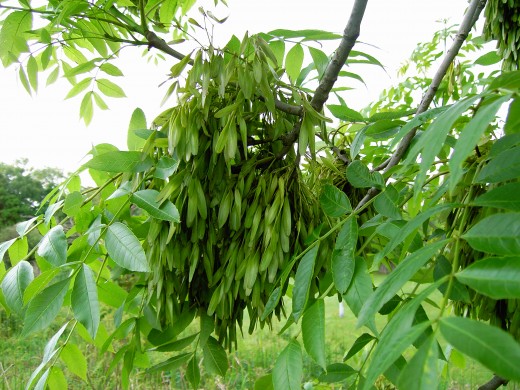 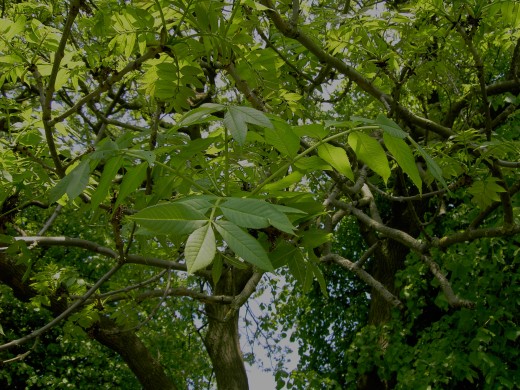 Ash has long been associated as a tree that spiritually connects the inner and outer world, above and below, far and near, male and female.

The leaves have a diuretic and purgative properties and have been used for the treatment of gout and rheumatism. It was advised that the leaves be collected during June and well dried, powdered and kept in airtight containers. seeds were also used in medicinal preparations and they were regarded in high esteem for the treatment of flatulence. They were gathered when ripe and stored away to be used when needed through the winter months.

The bark and the bark of the root was also employed in medicine. However, ash preparations are not recommended for home use. The preparations need to produced by professional herbalists or commercially. They can be bought ready for use in good health shops

They are green at first {see photograph} then becoming brown as they mature. They abide on the tree throughout the winter and are a valuable source of food for one of our most colourful small birds the bullfinch. The following spring they become unattached from the parent tree and aided by the wings of the fruit  are carried by the wind, often great distances from their departure point. They germinate readily and grow in almost any soil conditions.

ASH WOOD---as a timber it is a valuable commodity. It is a quick growing tree which has a tough yet flexible wood. It is heavy, strong, hard and takes a high polish. It is favoured because it does not shrink very much as it seasons, thus there is less waste. The wood of ash has been used for more purposes than the wood of any other tree.

Because of its elasticity it was used to produce long bows {along with the wood of the yew} that were once the dominant weapon during England's past. It has been used to produce handles of strong hard working tools such as the pick axe.It was utilised in the making of railway carriages, to make ladders, oars, carts, the shafts of carts to be pulled by heavy horses, the list is almost endless. The logs of ash make excellent fuel, burning fiercely without producing the smoke associated with most wood burned on fires. The ash that remains after it has burned is a good source of potash for gardens.

In October 2012 the Woodland Trust UK, revealed fears that a new disease was considered to be a great threat to the UK's ash trees. the disease commonly referred to as Ash die back has the scientific name of Chalara fraxinea. this disease has already killed thousands of trees in European countries such as Denmark.

Some woodlands in the UK are comprised only of ash trees so the disease is devastating news for organisations such as the Woodland Trust, the Forestry Commission, Nurseries, and tree growers. The ash tree as previously mentioned is an important biodiversity tree and its timber is used for making furniture, charcoal and other products.

The disease has been brought to the UK via infected, imported trees. Over the weekend of 26th/27th of October The Woodland Trust met with the Secretary of State Owen Patterson to further the pressure to ban the import of ash trees in an attempt to stop the spread of the disease. The Woodland Trust also called for an emergency summit bringing together representatives from all areas of Forestry, Plant health and conservation. the Woodland Trust would play a key role in any task force created.

During October the Woodland Trust confirmed that the disease had been discovered in both mature and ancient woodland and woodland creation areas on their estate at Pound Farm in Suffolk {southern England}. In light of this they asked for Government scientists to give urgent and clear advise on how woodland owners were to deal with this threat.

A plan of action

In November 2012 the Woodland Trust devised a three point plan in order to cope with the disease and its spread. The aims of the plan is to -1,bringing scientists and members of the public together to monitor and protect the UK's woodlands and tree. 2- to invest in nurseries so that trees grown are disease free and only controlled and monitored trees are planted. 3--keeping woodlands alive--by means of investing in woodlands to keep them free from diseases.

This was revealed after the largest national survey of its kind where Government Bodies surveyed 129,000 hectares across the country. the sites now affected number 115. there are 15 nurseries affected, 39 planting sites and 61 in the wider environment. 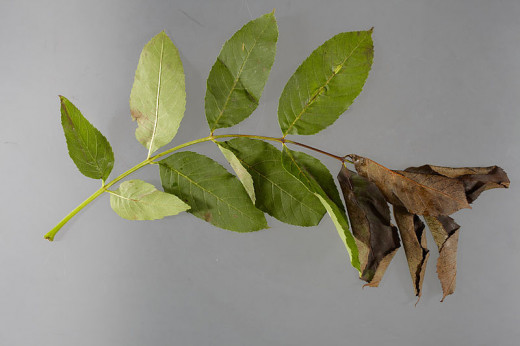 The images on this can be reused. However, the name of the relevant author must be attributed along with any accompanying license.