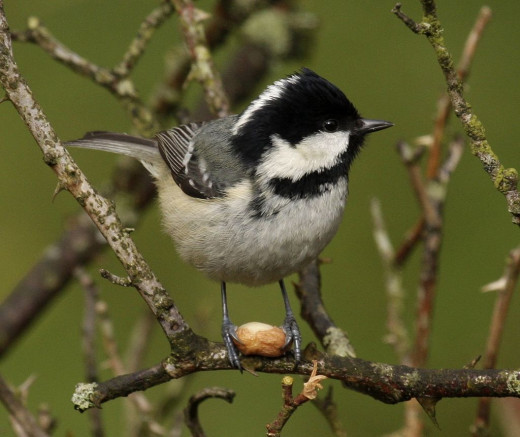 The Coal tit belongs to the Passeriformes {perching birds} and the family Paridae within that order. They have been allocated the genus name of Parus or Periparus from the Greek peri meaning very+ parus =tit and the specific name of ater from the Latin ater indicating mat black.

In Europe there are no conservation concerns with an estimated population of between 11-25 million pairs. { source the BTO }The Gaelic name for the bird is Smutag, the Welsh Titw Penddu and the Irish, Meantan Dubh 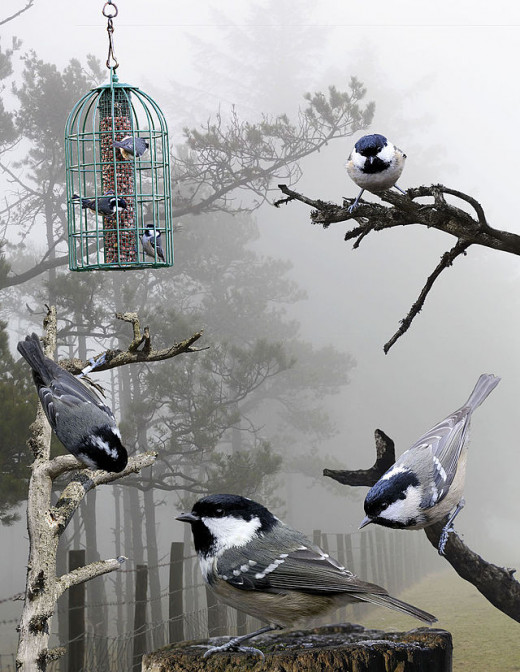 The Paridae constitutes one of the most charming groups among familiar wild birds. They are incessantly in motion,throwing themselves into every conceivable position. They hang upside down easily by one foot, as many other birds do by both. On a branch they move in a jerky,irregular fashion,and on the wing their flight is very undulating and not long sustained.

The strength of both the bill and claw in these birds is amazing and although the bills are in general slim and small and they easily remove bark or cut into the shells of peanuts as many who have garden feeders will testify.

A popular member of this family in North America is the little Chickadee** which looks some what similar to the Coal tit.

The coal tit is typical of this group of birds and the smallest member of the tit family in the UK,and it is this charming little bird that is under review here.

Chickadee of  North America is a similar bird to the coal tit. 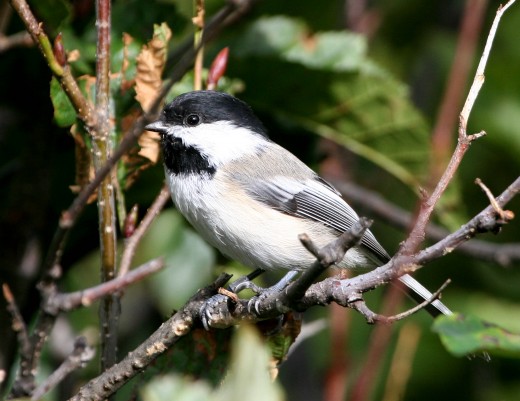 Typical members of the Paridae that occur in the UK. 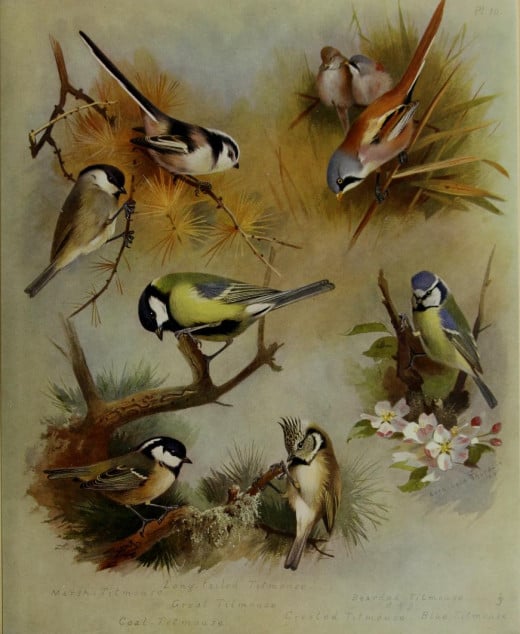 Description of the Coal tit.

This little bird has a black head with a white nape patch,black bib,and white cheeks. The back is of a greyish black or an olive grey colour. The undersides are a bright buff colour. The wings are dark with two white wing bars particularly noticeable in flight.. the iris is dark black-brown,the bill is thin and blackish the legs are dark brown.

In relation to its body size the wings are medium short, the tail medium length the neck short and the bill very short. The legs are medium.

This one of Europe's smallest birds and is more frequently associated with coniferous trees. The flight is weak and undulating { bounding} hen at all prolonged. It hops. It is prone to climb trees in the manner of the Tree creeper

In conifer woods it associates with Goldcrest outside the breeding season

Records reveal that Dr.Sharpe separated the British race of this species under the name Parus brittanicus on account of the olive brown tint of the upper back. However, it would appear that the continental form also occurred in Britain as well as the intermediate grades between the grey and brown backed forms.

Butler {1898 } coveys that on the continent the coal tit is generally distributed and resident throughout central and southern Europe. In Great Britain it is also generally distributed. He goes on to note " That in the autumn of 1895, I was able to stand under an Acacia in my garden and watch these pretty little birds going through their acrobatic performances within two or three feet above my head,so confiding are they. Indeed, one or two of them, rowing bolder as I remained quietly observing them,descended to a smaller branch to with a foot and peered down and chattered at me as though to say who are you? "

The favourite haunts of this species are coniferous plantations, copses,thickets and shrubs especially near common or open moor land. No tree or evergreen seems to escape the minute examination when in search of insect food. When it is satisfied the search has been completed it will fly off with its short fluttering flight to the next one. The bird remains in the UK all year round and does not seem distressed by the cold weather,as it is found in mid-winter in the most northerly parts of Scotland. During the winter they tend to roost in leafy evergreens.

During the winter months this bird is much more in evidence than in the breeding season and it is probable that the numbers are increased with the arrival of continental birds. Mr. Macgillivary gives the following account of the coal tit." It is pleasant to follow a troop of these creatures as they search the tree tops,spreading all around,fluttering and creeping along the branches,ever in motion,now clinging to a twig,in an inverted position,now hovering over the tiny tuft of leaves,picking in a crevice of the bark,searching all the branches, sometimes visiting the lower most and again winding among those at the very tops of the trees."

" In wandering among those woods you are attracted by their shrill cheeping notes which they continually emit as they flutter among the branches.Few persons thus falling in with a flock,can help standing to watch their motions for a while. It is also observable how suddenly, without any apparent cause, the whole troop, as if under marching orders, flit in a boy from the tree and alight elsewhere, again to go through their exercises,evolutions and manoeuvres." 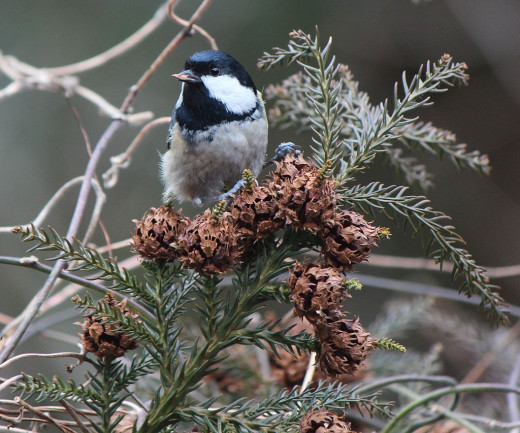 Before wild birds became protected by the law they were commonly caught by bird catchers, who made made a good living from procuring the birds in any way they could. They were then sold as cage or aviary birds or as food to the markets in towns and villages. Thankfully these days are now behind us. However, it is a part of our avian history and as such is worthy of a mention. The next few paragraphs relate to historical accounts of the coal tit in captivity.

Butler relates that in the June of 1888, " I heard of a coal tit nest in a cemetary in Kent {southern England} and visited it with Mr. Frohawk. We caught the mother bird on the nest and took out nine young birds and a clear egg. I enclosed the entire family in a large cage with the mother and gave her wasp larvae to feed them with. However, although the tits are very industrious and painstaking in feeding their young when they are at liberty, I soon saw that it was hopeless to expect anything of the kind in a cage." 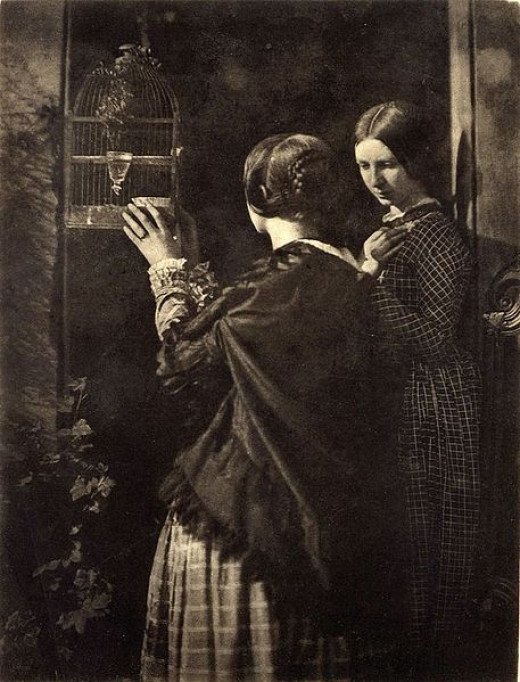 " The mother bird simply devoured all the maggots and trampled her babies underfoot in her frantic efforts to escape. I therefore opened the cage door at an open window and away she flew without another thought as to the fate of her family. For a week,during which time I was able to attend to my coal tits personally, they throve splendidly, but unhappily I had to return to work and leave them in the care of a young girl,who, in those days, used to come in daily and attend to my birds."" The consequence was that these charming little things were neglected, being allowed to get dirty, so that they gradually dropped off, one or two a day, until they were gone. I was a good deal grieved to lose these charming little birds, they were so lively and amusing. The moment that the lid of the basket in which I kept them was lifted, all nine sprang on the edge and standing in a row shouted at their
loudest, incessantly, until the feeding was over. Then in a moment they scattered,hopping in every direction. Some were on my arm, some on my shoulder, others on my head-and a nice little job it was to collect them all and replace them in the family nest in the basket"
" Sometimes my wife looked after them,and if they would not sit in a row,she used to push the rowdy ones back gently before feeding them,so that in a day or two they quite understood and stood like a class of charity children in uniform saying a lesson. It was a pretty sight and I quite missed the little things when they died. Poor little mites! It would have been better to have left them to their parent's care, but I did not know that at the time"

Illustration of the The coal tit and similar looking Marsh tit -BHL. 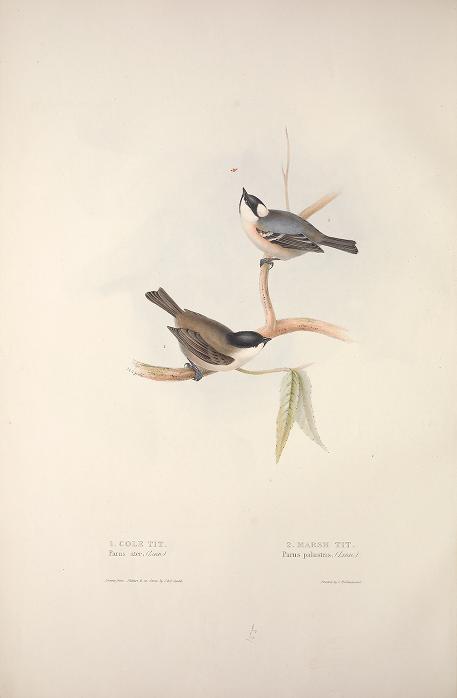 Their principle breeding grounds are birch,pine and fir plantations and Alder swamps but not exclusively so as they do occur in woodlands and towns. The nest of this species may be encountered in hollow orchard trees or behind ivy or in a hole in an old stone wall.

The site, wherever the situation, is always nearer the ground than other tit species, indeed in my own garden a pair built in an old stone wall, the entrance hole being no more than three feet from the ground.

The nest itself consists chiefly of thick, but loose lining to the selected cavity,sometimes covering the bottom of the hole,sometimes the sides also. When in more exposed places such as behind trellis work, they are often over-arched with a hole in front.

Eggs of the Coal tit. 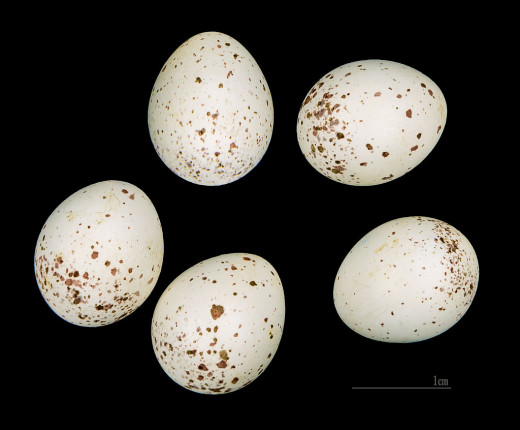 The female will deposit nine to ten eggs which are somewhat elongated ovals,sometimes with the two ends alike. The ground colour is chalky white or sometimes a delicate rose-pink colour, the surface more or less sprinkled with pale red dots which are occasionally collected into a mass at the larger end, but as a rule the eggs of this species are not heavily marked.

They are incubated by the female for 14-16 days. When the chicks peck their way into the world they are fed,as with other species of tits, on caterpillars and spiders,of which vast quantities are taken during the rearing of their family. The gardener should be very grateful to these active little birds for they remove countless destructive insects from the trees and bushes. When the birds reach adulthood they will feed on insects and their larvae but also seeds,buds and nuts such as peanuts put out for them in the garden. In the wild they will feed on Beech mast.

The young are ready to leave the nest in a further 16-19 days. At this stage of their development they resemble the female, the first feathers having a green tinge. The white sides of the face and the nape patch of the adults is replaced by a pale yellow, the back of the head more of a dull colour and the black of the throat and chest are represented in the young birds by a patch of dusky black on the throat only. 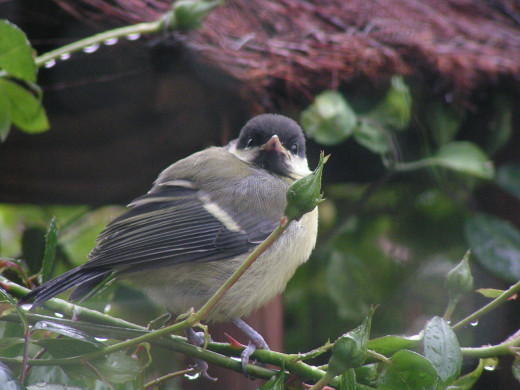