Clovers and their allies   Below the red clover. 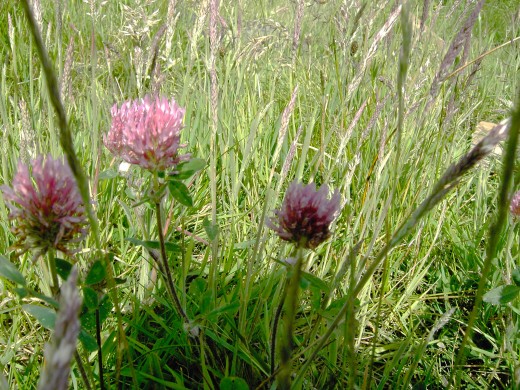 Clovers belong to a large family of plants formerly known as the Leguminosae, but are now more readily placed in the family Fabaceae the bean family. Most people of all ages are familiar with the clovers and the three commonest ones are detailed below.

There is an explosion of crimson colour in meadowland and other grassy places due to a plethora of red clover blooms produced by this prolific plant. The round or oblong heads which have a leaf directly below each of them are approximately 4cm long, they may be encountered in flower from May until September. They have a slight fragrance associated with them.

The foliage is typical of the clover family members having three leaflets {very rarely producing the much sought after four leaflets}. The form of leaflets is ovate, simple, nearly smooth, terminating in a point, they are often marked in the centre with an inverted V shaped. The stalks arise from one root stock, they attain the height of up to 60 cm {2ft} and are slightly hairy. The flowers are pollinated by Bumblebees. 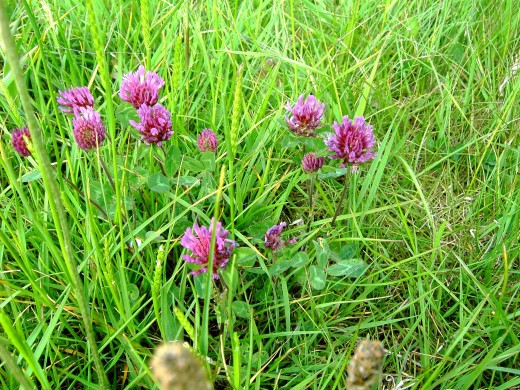 The flowers grow above the foliage.      Dal. dalswildlifesite.com 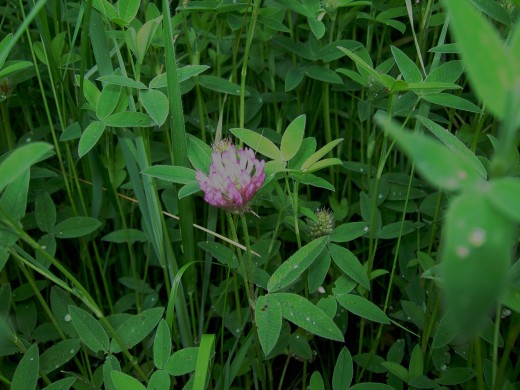 The leaves of zigzag clover are more linear than those of the red clover and lack the Inverted V markings. 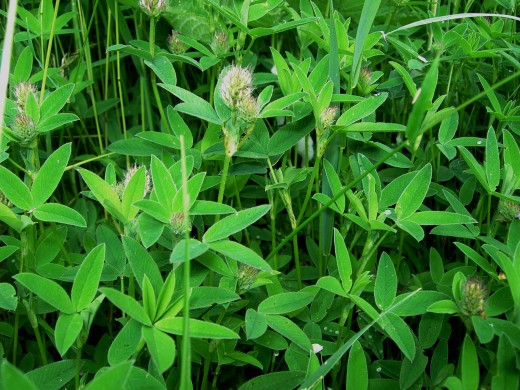 A similar and slightly less widespread species is the zigzag clover, Trifolium media so called because of the formation of the stems. It may also be distinguished by the flower heads lacking the leaves just below the flower heads, where the stalk can be clearly observed. The three leaflets are somewhat more linear and the inverted V is absent.

The most commonly encountered species of the three common clovers is Trifolium repens the White clover often referred to as the Dutch clover. They are often regarded as a nuisance weed, especially in well manicured lawns. It spreads by means of rooting runners allowing the species to get established quite rapidly.

The white clovers more sensitive to shade than other clovers and does well on damp ground. It is rarely found in tall grassland. Like the red clover the leaflets have an inverted V markings. 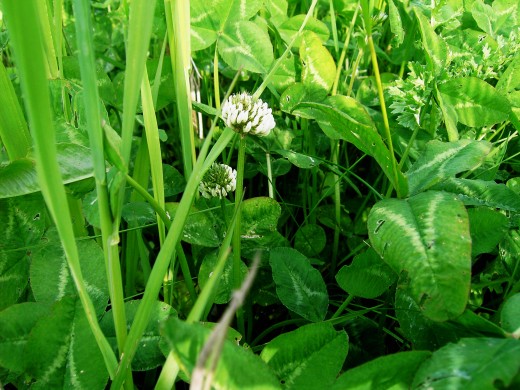 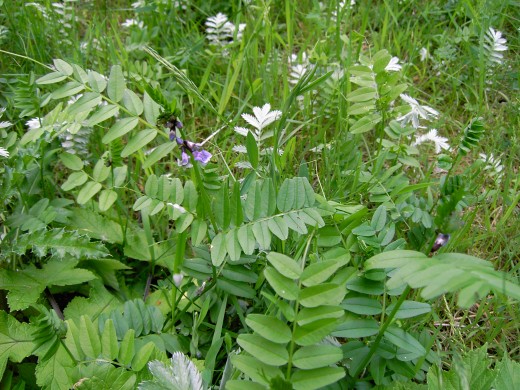 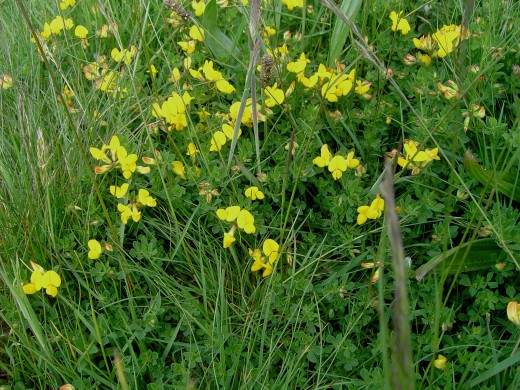 Tufted vetch is a common grassland plant related to the clovers. 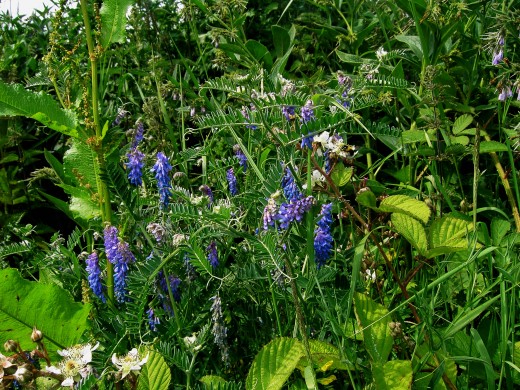 Seed pods of the bush vetch turn black when ripe. 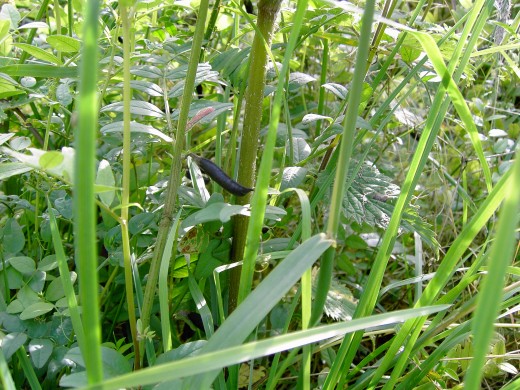 Black medick has yellow flowers and takes its name from the ripe {black} seed vessels. 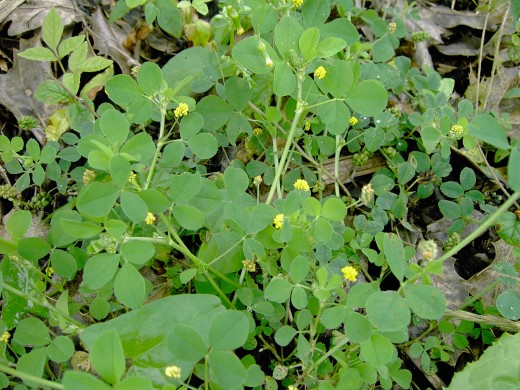 Flower-heads of the white clover.

The flower heads are rounded white or of a cream colour, 7-10 mm long. They flower from June until September. The sweet scented flowers are a rich source of nectar for bumble bees. What many people think of as the clover flower is in fact a flower head. The head is made up of many individual , small pea like flowers. An interesting aspect of the clover flower head is the way the individual flowers droop down towards the flower stalk once they have been pollinated. The bee visits the bottom row first . Once pollinated the flowers will droop. When the bee returns they visit the next row of flowers, which then droop allowing access to the third row and thus the sequence is repeated until the head as been fully pollinated. hence when one comes across the clover flower head it is easy to tell which flowers have been pollinated and which are still to be visited by these industrious insects.

In common with other clovers {and other species such as nettle} are capable of fixing nitrogen through the root nodules, thus increasing soil fertility to the benefit of other species growing in close vicinity.

The red clover was once utilized to make an infusion for use against bronchial complaints and whooping cough. Modern day science has revealed anti-coagulent and anti-tumour activity. The flowers and leaves can be cooked as a vegetable or used in salads. A simple home made infusion can be produced by placing 4-6 dried flower heads in 250mm of boiling water, leave to stand for 15 minutes. It is recommended that 2-3 cups are drank daily. It may be sweetened with honey. The white clover as long been used as an agricultural pasture crop.

Other relatives of the clovers.

Bird's foot trefoill Lotus corniculatus is another common plant, related to the clovers, brighten up short grassland including roadside verges with beautiful yellow flowers that are often tinged with red giving rise to one of its many country titles "Bacon and Eggs". The foliage of this species appears to consist of three leaflets in common with the clovers, however, closer observation will reveal that in fact there are five. Two smaller leaflets are to be found were the leaf stalk joins the stem.

The plant can attain the height of 20 cm or even more where the stems can gain support from more robust vegetation, however, the plants vary greatly in size and I have seen good flowering specimens that are only 3 cm tall. The common name for this plant derives from the shape of the seed pods which do indeed take on the form of a bird's foot including claws. This plant is capable of thriving even when grazed, trampled or even mowed.

It has been utilised as an agricultural forage plant grown for pasture , hay and silage. It is an important part of the eco-system of insects and is the larval food plant for many species of Lepidoptera. The greater bird's foot trefoil L.uliginosa thrives on wet ground and delights to grow in taller grasses, it being a more rob

The Black Medick Medicago lupulina, like the clovers has three leaflets, oval and with small teeth. The flower heads are yellow and in common with the clovers consist of many small individual flowers. The flower heads are much smaller than those of the clovers. The seed pods are a distinctive feature of this species being a coiled cluster, which, when ripe, turn a jet black colour. It may be encountered in grassy places but also on waste ground and recently cultivated or newly disturbed ground.

Finally we look at our last subject of this hub the Bush Vetch Vicia sepium which grows in grassland and along hedgerows where it uses its tendrils to gain its lofty ambitions. There are several vetches but along with the tufted vetchVicia cracca, this is the most wide spread species and the one most likely to be encountered during a countryside walk. They may be found in bloom from May to October. The flowers are unmistakably pea-like produced in small tight clusters. The colour varies from a greyish blue through to a purplish pink. The "standard " petal being veined with steaks of dark purple.

The leaf is composed of 5-9 pairs of leaflets that are opposite to each other along a common stalk. Terminated by tendrils. The leaflets are oblong and blunted at their tips. The flowers quickly turn a brownish colour once they have been pollinated. The seed pods are hairless and turn black when the seeds within are ripe. The seed pods are 2-3.5 cm long.