This common plant has acquired many rustic titles which includes harrif, sticky weed, sticky willy, clivers, and the two commoner ones cleavers and goosegrass. They are placed in the family Rubiaceae { The family includes about 300 species world wide } and the Order of plants known as the Gentianales.

The genus name of Galium derives from the Greek gala meaning milk. The connection with milk alludes to the former use of the plant's stems being dragged across open vats of milk. Foreign bodies such as hairs would be caught by the plants hooked bristles. There are 11 species in the genus that occur in Britain including the various bedstraws.

Most of the rustic names for the plant allude to the sticky {has a feel of velcro} stems and foliage that clings {cleave is an old English name for cling} to fur , and clothes. The specific name of aparine { which indicates to seize} also alludes to the hooked bristles.

Cleavers is a native annual found in fields and hedgerows, scree slopes, shingle, as a garden weed and on waste land. It is naturally widespread throughout Europe, north America and some parts of Asia, it grows as far north as Alaska and Greenland and it as also been introduced to countries in the Southern Hemisphere.

It is a frequent weed in arable crops and in particular winter cereals. Because of the plants sprawling nature,and its ability to form dense patches, it can drag crops down , making them difficult to harvest.

Cleavers, is a straggling climber growing up to 3 metres long, with slender, 4 angled stems;its narrow leaves can reach 7cm long, and are arranged in groups {known as whorls} of 6-8 { rarely four} around the stem. the whole plant is covered by minute hooked hairs and the cling [ cleave} to fur and clothing.

The flowers are tiny and white composed of a 4-petalled tube, developing into small roundish fruits, often borne in clusters of 2-3. these fruits are also covered in the hooked hairs which cling to fur and clothing , thus ensures the distribution of the species.

The seedlings appear very early in the year as early as January, however, growth of any significance only commences during April and May.

--New lush growth only commences during April and May

Flowers appear from June until August and the succeeding fruits occur from July until October. Seeds that are buried in the autumn will remain dormant until the following spring.seedlings that emerge in autumn will reach the height of up to 20cm, then remain at that size until spring. daylight  and temperature determine the growth and the production of flowers. Studies have shown that seeds buried in the soil only remain viable for 2-3 years.

Seeds survive the passage through grazing animals and birds. They are capable of floating in water.However, they do not like being waterlogged .

A note of warning to dog walkers. the fruits of cleavers that are caught in the animals fur can find its way through to the skin , where it is a source of irritation. As the dog scratches, to rid its self of this irritant, infection can occur on the skin's surface. Some of these infections can be difficult to heal.

Cleavers-a glimpse at its historical use in medicine.

We start in the distant past . William Coles in his book "Adam in Eden" printed in 1657 states that--" A handful of cleavers boiled in a quart of ale with a little pared liquorice ; and fome currents to the one halfe and then ftrained, may be fuceffefully drunk morning and evening for the cough., and removing phlegme from the stomak. It is also ufed to ftay bleeding, the juice or bufed leaves being applyed to any green wound, and not only to ftop the blood, but to clofe up the lips of it, and the powder of the dryed herb ftrewed thereupon doth the fame, and like wife helpeth old ulcers."

NOTE-- the above text is as it appeared in his book at that time. During that period the letter "s" was commonly replaced with the letter "f".

Also in the 17th century Culpeper wrote in his book THE COMPLETE HERBAL---" Taken in broth , it keeps them lean and lank that are apt to grow fat. The distilled water drank twice a day cures the yellow jaundice. The juice of the leaves, a little bruised and applied to any bleeding wound, stayeth the bleeding. Being boiled in hog's lard it reduces the hard swelling or kernals in the throat, being anointed therewith."

Later in the 19th century John Hill {1714-1775} had his book THE FAMILY HERBAL published in 1820. In the book he states " The juice of the fresh herb is used; it cools the body and operates by urine.; it is good against the scurvy, and all other outward disorders. Some pretend it will cure the evil but this is not true" 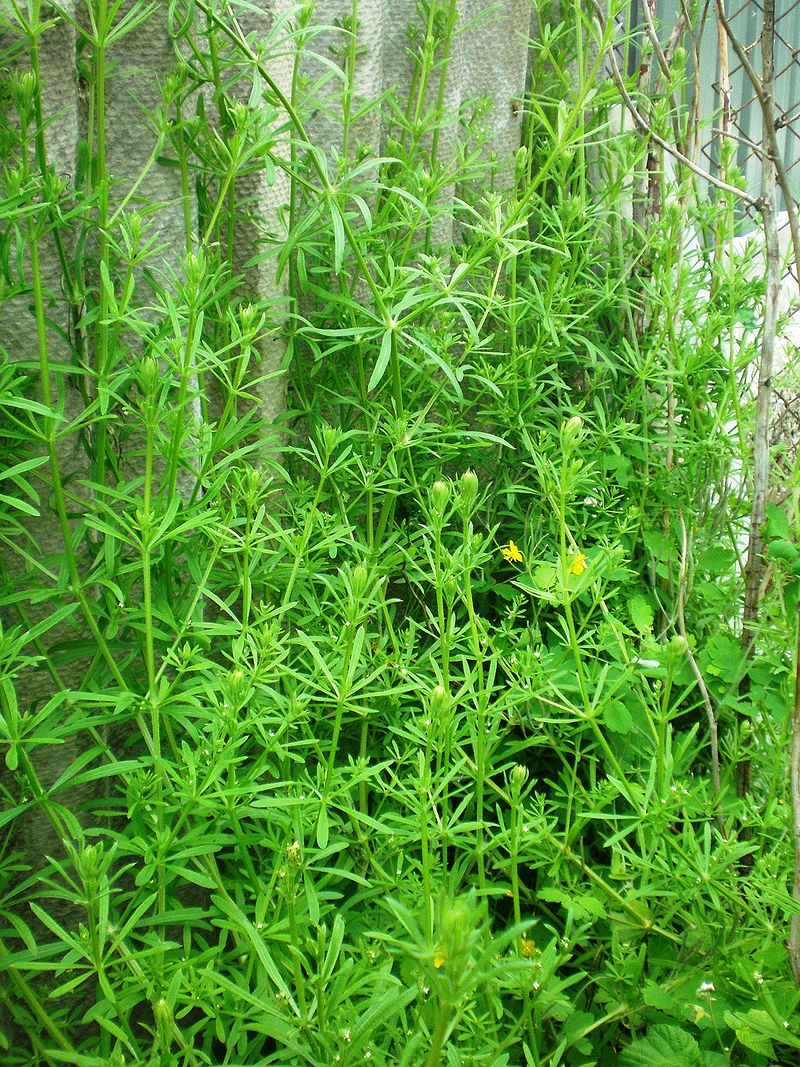 Cleavers is now used against eczema and hypertension. They have an appetite depressant used against obesity. It is astringent, diuretic, tonic and Helps to heal wounds.

I have eaten this plant for many many years during the spring  in conjunction with the stinging nettle as ingredients to spring soups and broths. It can also be eaten {with nettles or without}  as a vegetable. The hooks that help the plant to stick to clothing and fur are rendered harmless by boiling water {as are the stinging hairs of nettles}.

Taken in this manner they are a good blood purifier and act as a tonic to pick the body up after the long cold winter.

Anyone trying wild herbs for the first time is well advised to read WILD HERB ADVISE.

The images on this page may be reuse,however, the name of the relevant author must be attributed along with any accompanying license.

ASSOCIATED PAGES-Click on the content banners on the top of this page. Scroll down to view.

All other flora that are featured on this site can be viewed by clicking on the individual content banners { They are all grouped together}.

Nettles for food and medicine.

Flora via Links. Click on the links banner at the top of this page ,scroll down to relevant box. Click this is a direct link to the article{s} Includes the series Past and Present Medicinal  Uses.

Flora via your search bar. Click on the the relevant content banner at the top of this page. Scroll down to the subject you wish to view. Type into your search bar the shortened address given. This is a direct link to the article {s}.