Introduction to Clearwing Moths in the UK.

It was once a relatively lucky occurrence for the layman to encounter the male Clearwing moths, that is until the advent of manufactured versions of the female scent which attracts the moths. It is now a simple matter for enthusiasts to hang a lure on a tree or shrub in a sunny spot to attract the males in a  matter of minutes. A great advantage of indentifying clearwing moths is that,like the butterfly, they are on the wing during the day.

The use of these lures have become increasingly popular among moth enthusiasts and as result of increased reporting of these attractive moths a lot more is now known about their general distribution.

These moths have a superficial resemblance to wasps {or Hornets} both in size and appearance,an imitation that affords some protection against predators. Adult clearwings occur between May and August depending on the specie, most species peaking in June and July. On the wing they are most active during the warmest sunniest spells, the males in search of females for the purpose of mating.

These moths have long, narrow transparent wings from which they take their common name. They have black bodies adorned with bands of yellow or red. The head is small in comparison to their bodies which is a good identification feature. The majority of these moths are dependent on a particular genus of plant,which are generally woody perennial trees. These may be apple, Alder, Birch,Poplar, willow or currant bushes of the genus Ribes.

It is known that three of the British   Clearwings  utilize Birds-foot trefoil, Thrift and members of the genus Rumex {Sorrels and Docks}. The eggs are deposited in the foliage by the female.

The larvae hatch from the eggs in only a few days and proceed to bore into the stems,trunks or roots in which they hollow out tunnels as they  feed on the plants material. The larvae are whitish with a reddish-brown head. When fully fed and grown they form a pupa in a fibrous cocoon just under the surface of the root or trunk, which is located near to an exit hole previously prepared.

Enthusiasts will search out these pupal cases which are left protruding from the exit holes at the commencement of the flight season and endure for a long time after they have been vacated. The life cycle can be completed within a year but in the case of many species three years is the norm.

A Look at the Species.  Lunar Hornet Moth.

The Lunar Hornet Moth, Sesia bembeciformis is a similar species to the Hornet Moth {see below},but has a much wider distribution with sightings reported in almost every county in England and Wales. there are also recordings from southern Scotland. There are records from Cos Fermanagh, Down and Armagh in Northern Ireland with scattered reportings in the Republic Of Ireland.

The head of this species is black with a bright yellow collar {see image above}. The adults, are very rarely sen with sightings generally occurring in the mornings on willow trunks as they wait for the suns warmth to energize them before they disperse. They usually emerge in July to early August.

The larvae overwinter,sometimes two winters. They feed close to the ground in their first year. They feed on the lower trunk and the upper roots on other trees too, such as poplar,where they seem to prefer mature trees in damp situations.  The species is likely to occur where the food plant occurs in locations such as open woodland,heath, moor, hedgerow,old quarries,fen and Carr.

The Hornet Moth ,Sesia apiformis, has a large and bulky body as the true Hornet,Vespa crabro, and as a similar jerky movement when disturbed. The abdomen has yellow banding, but it lacks the wasp-like waist. After emergence,most of the wing scales are lost revealing a transparent wing membrane.

Habitats for this species include parks, hedgerows, golf-courses,quarries,pits and fens, the edges of plantations, edges of ponds,damp woodland, and also marshy places with mature Willow.

Life cycle---The adults emerge from mid June after having overwintered for two years as larvae they spend the a third winter in  their cocoon. The eggs are laid at the base of a tree usually poplar or willow. After the larvae hatch they feed just below the surface of the bark near to the ground or just above it. The adults which emerge together in the early morning may seen as this time resting on the tree trunk for a period before they take to the wing. Once this occurs the adults are seldom seen.

These are resident moths and are regarded as being nationally scarce. They occur in the main in southern and eastern England {East Anglia},and  in the Midlands. They are thought to be most frequent in Kent and Essex. There have been records in the past from Denbighshire, Flintshire and Glamorgan regions of Wales.

This is another small species which is on the wing from May until late July. It is widely distributed  throughout England and Wales,also extending into parts of Scotland,however, it is not especially common anywhere.

They have a yellow collar and generally two fine yellow lines running down the thorax. The male has four yellow bands {the female-3} across the abdomen,which is black tipped,broad at the tip and not tapered. The adults may be seen around the larval food plants-black and red currant bushes-,and they are more likely to be seen resting on the leaves than other species.

The larvae which feed on the roots of black and red currants overwinter usually once as larva in the main stem or the side shoots of the food plant. They are found in fruit fields,gardens, allotments in both rural and urban areas. It is thought that they are in decline because their larval food plants are less frequently grown than in the past. 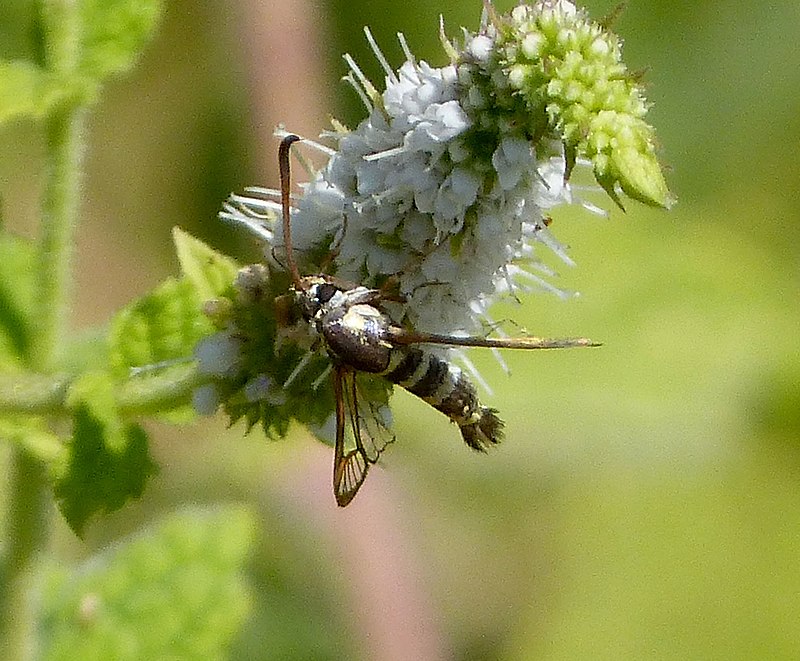 This species has reddish coloured central crossbar on the forewing and the easily visible parts of the legs are yellow. There are four yellow bands on the abdomen. The tail fan is yellow above on the female and easily seen during flight. The tail fan of the male is black above with some yellow below. They are in flight from l;ate May to August.

Other species include the Fiery clearwing, Pyropteran chrysidiformis. This is a red data species found locally on the coast or a short distance in land at times in Kent between Folkstone and Dover.

Six-belted clearwing. Bembecia ichneumoniformis, has a local distribution in the southern half of Britain and inhabits calcareous chalk downland,Quarries and sea cliffs. They  are day flying moths on the wing between June and August. The caterpilllars feed on Birdsfoot trefoil and Kidney vetch generally on the root-stock.

Orange-tailed clearwing, Syanthedon andrenaeformis, is a species of central and southern England,found on chalk down-land ,generally at the edge of woods. The adults are on the wing between May and June. They are a very elusive species and they may be overlooked and under recorded. The larva live for two years or more boring into the stems of the Wayfaring tree and Guelder rose.

Welsh clearwing. syanthedon scoliaeformis. This is a very local species in parts of Wales and Ireland,and, recently recorded in quite large numbers in Staffordshire,England. Females generally have an orange tail while the males are darker brown. Both sexes having two narrow yellow rings on the abdomen. The larvae bore into the wood and feed on Birch. Flying adults occur between June and July.

Red-tipped clearwing. Synathedon formicaeformis. This species is recognized by reddish patches on the forewings. Local throughout much of England,southern Scotland,south Wales, they are scarce in Ireland. The larvae feed on various species of Salix. They are on the wing from June until the end of July.

Salix clearwing. Syanthedon flavientris. This species was only discovered in 1926. It is locally common in parts of central southern England. They are on the wing  from June until the end of July. larvae feed on Sallow and forms a distinguished gall.

White barred clearwing.  Syanthedon spheciformis. Locally distributed in southeast and northwest England and parts of Wales. Creamy patches occur near the tips of the antennae and a white band on the  second abdomen segment. The Larvae feed on Birch and Alder burrowing into the wood where they remain for two years.

Red-belted clearwing. Synanthedon cultiformis. This species has an orange-red tint at the base of the forewing. They are on the wing between May and June and the larvae feed on Birch.

Any images or videos that are reused from this page must attribute the relevant author along with the relevant license.