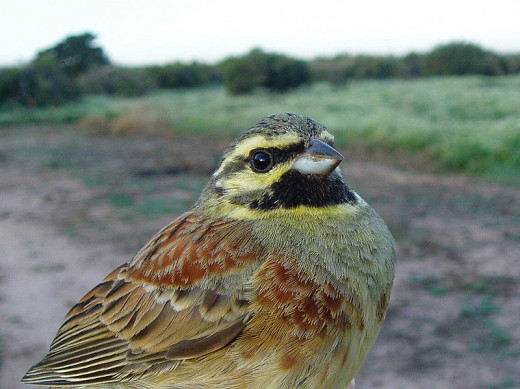 The Cirl Bunting Emberiza cirlus belongs to the Passeriformes Order of birds {perching birds} and the family Emberizidae within that order. The genus name of Emberiza derives from the old German embritz-a bunting. The specific name of cirlus derives from the Italian { Bolognese} name for the bunting.

In the UK, it is placed on the Red list of conservation concern {declines of 50% + over the last forty years or so.} with an estimated population of 860 territories {summer}. {See conservation UK below}. In the UK it is classed as a resident breeder.

In Europe it is regarded as being secure with an estimated population of between 2-5.2 million pairs. Populations vary from country to country there follows a few selected examples.

They are birds of woodland edge and scrub. 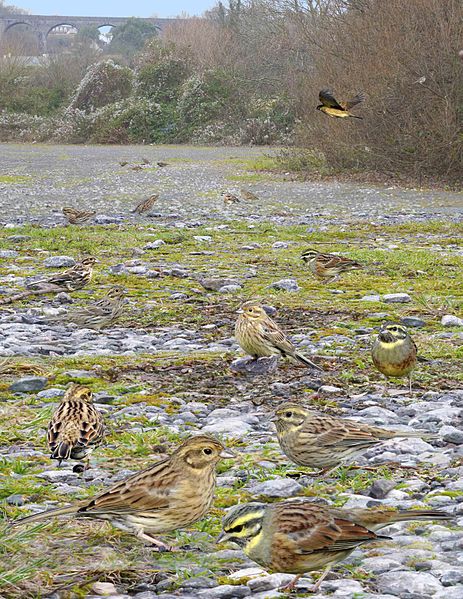 Description of the Cirl bunting.

The adult male Cirl bunting has the crown and nape olive green,longitudinally streaked with dull black. The rump and upper tail coverts olivaceous. The sides of the head blackish olive, with a lemon and yellow stripe above ,and a second one below the eye,from the base of the beak to the neck. the chin and throat to the sides of the neck dull black,bounded by a half collar of lemon yellow.Across the chest is a greyish -olive belt. The remainder of the under parts is lemon yellow.

In other respects this species nearly resembles the Yellow hammer **, the black wings,and the tail being very similar. The beak is a dark horn brown above,but paler and bluish below.. The feet are a yellowish horn colour the iris hazel.

The female is much duller,and chiefly differs from that sex of the Yellow hammer,in the absence of yellow on the crown,and the oliveaceous rump. The yellow under parts is also not so bright,and the streaking is better defined. They are six to six and a half inches long and both sexes weigh 25 grams.

The young birds nearly resemble the female ,but are duller still. The Male after the autumn moult ,has ashy fringes to the black feathers of the throat,which ,however, vanish in spring.

The flight of the bird is undulating {bounding}. The song is a brief trilling rattle described as being somewhere between the trills of the Lesser Whitethroat and the Wood Warbler **,normally delivered from high in a tree and it is quite distinct from the Yellowhammers song. The alarm note is a Wren ** - like churr.

They occur in small flocks or in parties after the breeding season,often with other seed eaters and especially the Yellowhammer

** This species is featured on this site.

Cirl buntings though not rare rare in days gone by were always restricted in distribution,and particularly to the southern counties. Up to the 1800's bird books asserted that the bird was found breeding in all southern counties from Cornwall to Sussex,being apparently absent from Kent.

However, Butler 'British Birds and their Eggs' 1898, writes " It has however, been found breeding as far north as Yorkshire,but is accidental occurrence at any season either in the Midlands or the northern Counties."

In the 'Zoologist' for 1891,page 353, Mr. E A Swainson,records its occurrence in Cardiganshire and wrote " This species which has in the last two years become rather common in parts of the adjoining county of Brecon,where it was previously very rare,appears to be gradually extending its range westwards."

There are records from the 1930's of the birds breeding in North Wales and as far north as Cumbria. However,due to changes in agricultural practices the species suffered a significant and rapid decline in the second part of the twentieth century. This decline reached its peak in the 1960's to the extent that only 118 pairs were thought to be present by 1989. At this time the birds remained in just three counties of England and 96% of the population was in south Devon. {See conservation UK below}.

In general disposition the Cirl Bunting is very like the Yellow hammer,however, in the breeding season it becomes much more skulking and will be heard singing from deep cover,but the singer seldom seen. The food of this species is very similar to that of its congeners consisting of Grasshoppers, Moths, Beetles, Caterpillars and Spiders during the breeding season to feed their young ,but in Autumn and winter relying on various seeds and grain.

Lord Lilford, {The Birds of Northhamptonshire}, relates " My acquaintance in Northamptonshire with this species occurred June 29,1866, on the afternoon of which day ,as I was watching my Emus and other birds in the courtyard at Lilford, a fine male Cirl bunting flew down from a high Elm tree,settled on the ground within a few yards from where I stood,and began to feed on the grain which I had scattered for the Emus,and at which several Sparrows and Chaffinches were already feeding. I had this bird in full view for some minutes as he hopped about and regaled himself,till he was attacked by a Sparrow,and flew up to the tree from whence he came. I listened and watched for him on that and for several succeeding days,but neither heard nor saw him again". 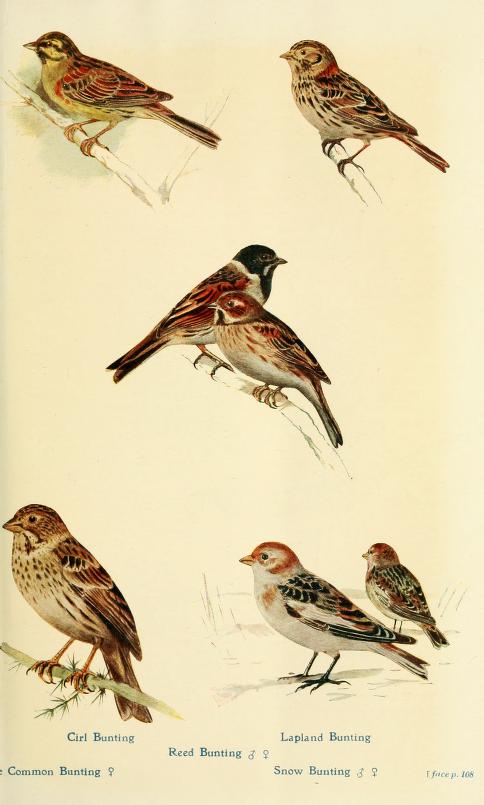 British Birds in their Haunts.

A brief mention of Cirl buntings in captivity.

In the days before it became illegal for wild birds to be kept in captivity,Bird-catchers made a good living by procuring wild birds by any means,usually by mist nets, and selling them to Bird Keepers,or to the market as food.

In confinement Butler reveals that " it lives well on the usual mixed seeds,including oats,with the addition of an occasional meal-worm,cockroach or spider"

Lord Lilford, observes that like most of the British buntings the Cirl bunting {if kept in an aviary} is " Dull,silent and greedy" Mr.Philip Crowley,purchased a pair at the Chrystal Palace Show,and turned them into a mixed aviary where he said they lived for several years. However, Butler, writes " One which I had in 1893,only survived for about twelve months,dying suddenly without any apparent cause" 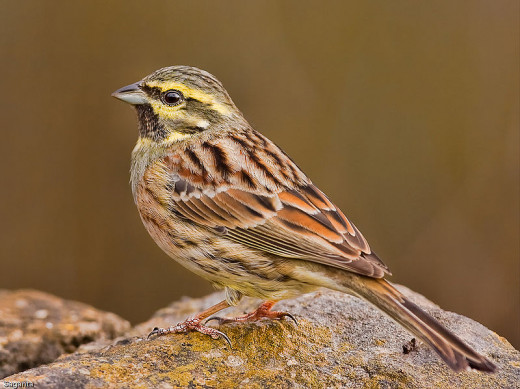 Originally posted to Flickr uploaded to Creative Commons via Bogbumper

Cirl buntings tend to pair in April and begin their task of egg laying during May. Notes from past ornithologists reveal a lot about the nesting habits of these birds. Saunders who found it not uncommon in the Chalk Hills of Surrey wrote " The nest is placed in a bank among the stems of Hazel or other bush,though sometimes in Furze {Gorse} or Juniper at little distance from the ground.".

The nest itself is a fairly compact structure internally,but externally it seems somewhat loosely put together.The outer wall usually consisting of coarse dead grass,bents and vegetable fibre. The lining is of fibre and dark hair and occasionally a little moss is added,moss is rarley used with any of the British buntings.

The female will lay three to four eggs which are often a little broader than those of the Yellowhammer, they are white generally very faintly tinged with lilac,streaked,spotted and dotted with purplish black,especially towards the larger end. The eggs are incubated by the female for a period of about thirteen to fourteen days. The chicks remain in the nest for a further twelve to thirteen days before they are ready to fledge

Eggs of the Cirl bunting. 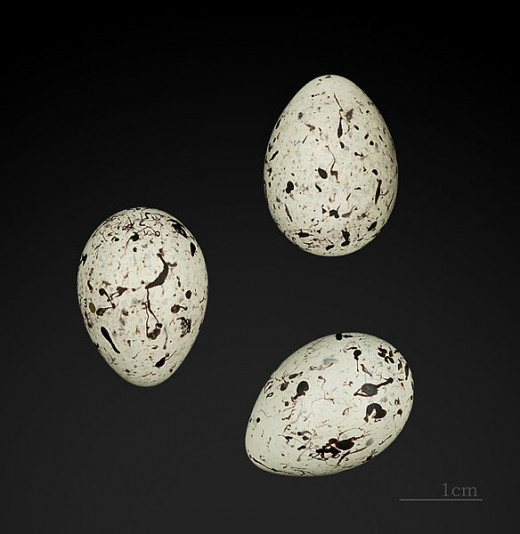 As previously mentioned Cirl bunting numbers and distribution fell dramatically in the 1960's and 1970's for reasons given above, the principle one being changes in agricultural practices.Since 2006 Paignton Zoo Environmental Park has been involved with the Royal Society for the Protection of Birds {RSPB} in re-introducing the species into the Roseland Peninsula in Cornwall,along with other organisations including Natural England and the National Trust.

South Devon is one of the last remaining strongholds in England that has a healthy population of Cirl Buntings. Under license from Natural England young chicks are collected from carefully selected nests located around south Devon. The chicks are then hand reared and ringed with a unique colour co-ordinated ring so that they can be monitored in the wild.

The aim of the project is to re-establish a self sustaining population on the Roseland peninsula. Cirl buntings by nature do not move far away from their home territory and will stay in an area that provides all year round requirements,which include hedgerows where they can nest undisturbed,extensive grassland that provides insects on which to feed their chicks,and stubble fields for winter seeds.

Because many farmers are now working alongside conservation groups and because of government schemes the habitat in Devon and Cornwall has changed to a much more suitable habitat for the Cirl bunting,which had previously been lost to them. Since 2007 the population has increased and this year {2015} the project team are expecting at least 100 breeding pairs to have begun nesting. The slow but steady increase is thanks to the hard work put into the scheme by conservation groups and organisations mentioned above and to the farming communities. I along with all who love nature, wish them all the best for now and the future. 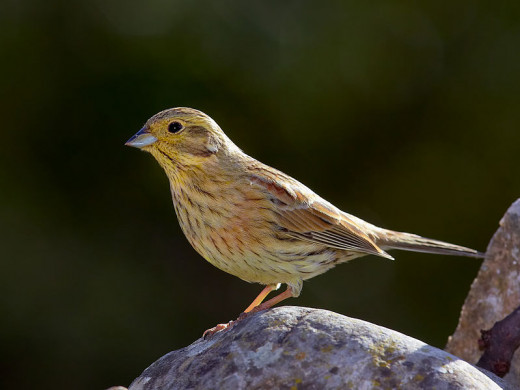 Originally posted to Flickr uploaded to Creative Commons via snowmanradio