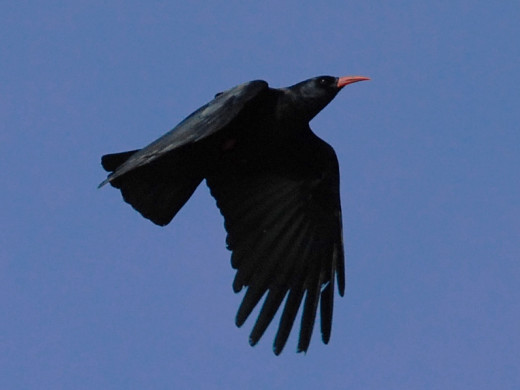 This handsome bird is a member of the Passeriformes {perching birds} and the family Corvidae and placed in the Genus Pyrrhocorax from purrhos indicating flame coloured + Korax meaning a raven. it has also been allocated the same name as the specific name.

This species is sadly in decline in the UK and is currently placed on the Amber list of conservation concern. { Criteria for inclusion are losses in population/distribution numbers of between 25 and 50% over the last forty years or so.}

The Gaelic name for the bird is Catlag-dhearg-chasach. In Welsh Bran Goesgoch and the Irish Cag-Cosdeary. { courtesy of the BTO }

Here we look at the birds lifestyle and breeding habits. The review will include extracts from past ornithologists along with images of this the most colourful of the crow family. As always we commence this review with a description of our subject.

The plumage of the Chough also referred to as the Red billed chough has the entire plumage rich-black, beautifully glossed, especially on their upper parts, with steel blue. The wings and tail in addition to the steel blue gloss also display violet and purple reflections.

the beak which is long and curved, and the legs and feet are vermilion red.The claws are black. Irides brown. The female is slightly smaller in size but can not be distinguished in the field. the length of this species is 40 cm {16 inches} with a wingspan of 82 cm {33 inches} and the weight of the birds both male and female is around 310 grams.

In relation to its body size the wings are of a medium length as is the tail, the neck is short, bill medium, legs short to medium length.

The chough is the only blackbird with red bill legs and feet.

The chough was commonly referred to as the Cornish chough has been alluded to by some celebrated writers both in poetry and prose.

The birds were,at one time, much more frequently met with than they are today and many of their former haunts are now devoid of this species. Some old names that referred to the bird includes red legged crow, crow -chough, Killigrew, Hermit crow, cliffdaw and Gesner's woodcrow.

According to Swaysland, in his book Familiar Wild Birds {1883} , he states although the chough is classed among the Corvidae it is not a true crow, but seems to be a connecting link between the crow and the pastors. It is distinguished from the crow family by the form of its beak, which is longer than the head, which is arched, pointed and red. The flight is somewhat like the rooks, but more rapid, and its movements on the ground more graceful and lively. The note is shrill but not unpleasant and has been described as sounding like the words 'creca ,creca' and it has been known to utter a quick chattering note like that of a starling" The flight is often performed in airy circles with little motion of the wings, they glide for forty or fifty yards and so on, until the y gradually alight on the rocks or grassy headland { never on trees }. During the flight the feathers of the wings are much expanded giving them a fringed appearance.

The places where it was once commonly encountered in the UK included Cornwall, Devonshire, Pembrokeshire, Flintshire, Angelsey, the Isle of Man, Galloway, the Wiltshire downs and many parts of the Irish coast. Cornwall was noted for their chough populations. However, at that time the bird was subject to much persecution which contributed greatly to its decline in many regions.There is on record an account of a bird being shot on the Wiltshire downs in August 1832, between Marlborough and Calne. It had also been recorded in Surrey. In 1826 one was shot at Lindrige in Worcestershire. In Ireland according to Mr. Thompson, of Belfast it occurred in suitable habitat all around Ireland.

The bird is partial to the sea shore and the banks of large tidal rivers near to their junction with the sea and their associated cliffs.

Diet of the chough.

The food of this species consists of insects, grubs,small crustaceans, grain, berries and the occasional carrion. When feeding on small insects the prey is swallowed whole, but when larger prey such as cockchaffers are procured it will be held by the feet and pecked at until devoured.

The birds were once kept as pets or aviary birds and one record by Bishop Stanley relates to how they fed upon the lawn. He states--" on a lawn where five were kept, one particular part was found to turn brown, and gave the appearance of a field suffering from severe drought, covered as it was, with dead and withering tufts of grass. It was soon ascertained that the choughs were incessantly employed in tearing up the roots of it, for the purpose of getting at the grubs. The way they set about it was thus-They would walk quietly over the surface, every now and again turning their heads, with their ears towards the ground,listening attentively in the most significant manner. Sometimes they appeared to listen in vain, and then walked on, till at length, instead of moving from the spot, they fell into pecking a hole, as fast as their heads could nod.; they were often successful in their search. In this respect both their food and the way they obtain it is reminiscent of the Montague {harrier} " 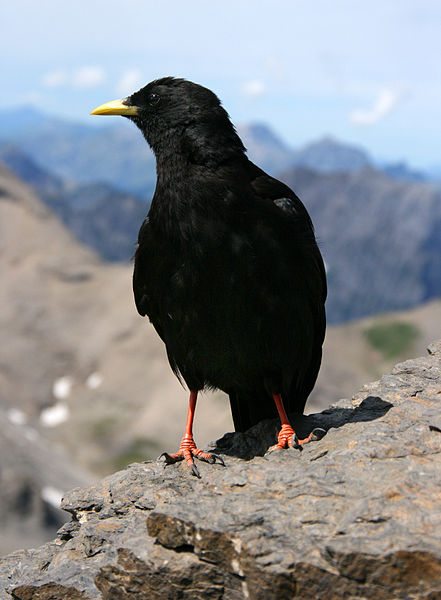 Whilst in the British Isles the chough is a bird of the and near by sea cliffs, in Europe it tends to breed almost exclusively in mountainous regions. The species encountered here is the Alpine chough or yellow billed chough.

Like the Rook and the Jackdaw the birds tend to live in colonies. Dixon relates to encountering the chough in Algeria and made notes of its habits there. he conveys-" It was not until we reached the highest parts of Djebel Aures that we met with the chough. At Constantine the place seems admirably suited to its needs, but the Jackdaw is the only Corvine inhabitant of these magnificent rocks. When making the ascent of Djebel Mahmel, some twelve miles south east of Lambessa, we observed quite a colony of birds on a low ridge or rocks, on the one side the barren stony valleys near the snow capped summit of this fine mountain.

" Fifty of the birds could be seen in the air together beating slowly along the rugged face of the cliffs, and every now and then one or two would enter their nest holes, or just as frequently a pair would fly out of them. How the birds obtained a sustinance up in the sterile mountain's solitude , might well give cause to wonder. Yet we could repeatedly see them upon the stony ground, apparently searching for food. I sometimes noticed one of the birds as it flew along the cliff, drop suddenly down among the rocks; but, as they were exceedingly shy, I could never get an opportunity of finding out the cause of the birds visit to earth. It may have been to capture a small insect, beetle or locust.

" Upon another occasion we met with a smaller colony of choughs in the portion of the Avles known as the 'Cedar Range' south west of Balna. The colony had its head quarters at the very summit of one of the highest mountains, in a ridge of rocks, commanding a fine view of the forest clad hills. As we slowly rode up the steep path on our mules, the report of our guns as we occasionally secured a specimen of some bird, startled the choughs from their nests in the rocks far above us, and they commenced circling about in the air, displaying great powers of flight, and their shrill notes resounded through the woods echoing again amongst the rocks.

" I now and then saw them alight upon the little open spaces of herbage, searching amongst the dung for insects and beetles. Although living amidst the Cedar Forests, I never noticed the birds alight in the branches, but always on the rock shelves or in the crevices, in which they doubtless build their nests. It should be mentioned that the Jackdaw is very rare in both localities above mentioned, and it may be that the birds abundance at Constantine that explains the choughs absence."

Illustration egg of the chough 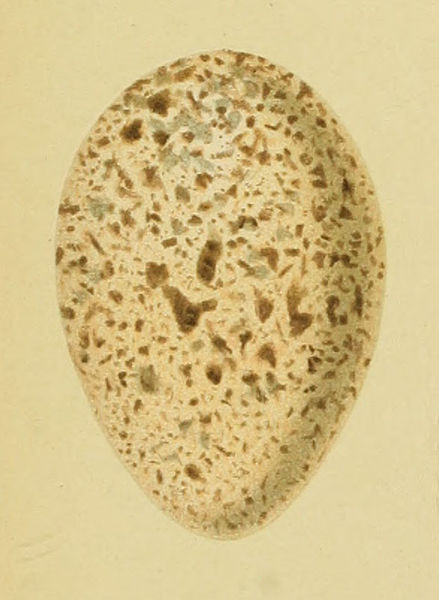 Breeding ,nest and eggs of the chough.

The chough is encountered in pairs throughout the year and appear to form partnerships for life. here in the UK, the breeding season commences during early May. The site chosen for the nest is usually in the most inaccessible places, where the rocks overhang and drop down as a sheer wall to the ocean below.

In days gone by when the bird was mush more widespread in its distribution it would be met with inland and choose sites, as does the Jackdaw, such as buildings, but alas these days seem to be long gone. The nest is usually located in some crevice or hole in a rock, sometimes at considerable distance from the opening, where it is absolutely impossible to obtain the eggs. It is made of sticks and heather stems and lined with dry grass, roots and wool or hair. It is often a large structure, but as is usual with birds that nest in holes they are seldom compactly made.

The eggs of the chough, 3-5 in number, range in ground colour from creamy white to greenish white, spotted with brown of various shades and dashes with underlying markings of purplish grey. In some specimens the spots are large and bold-scattered irregularly over the surface, in others they are more finely scattered but tend to be collected together at the large end of the shell, many of these are confluent.

The incubation period is around 17-18 days and the task is undertaken by the female. The chicks are born blind and helpless. Both parents feed the chicks and defend them and the nest site from marauding predators.

The young are ready to leave the nest in a further 31-41 days after they have hatched. This is dependent on conditions and the availability of food.