The stories are taken from the book 'Walks of a Country Naturalist' {with his children}. The book is not in copyright and courtesy of the Gutenberg Project. The author Rev.W Houghton was based in Shropshire, England {Midlands}. The book was published during the 1800's and the text will be as it appears in the book. The only additions that I make are because species names have changed or other relative information.  Anything that I do add will be in brackets. The images that are shown will have the relevant license permissions. Any that don't have the permissions are taken from the book.  Please enjoy---

On the page Children nature walk October -1 we left the family looking at fungi,- on this page we rejoin them ----- What are those black circular spots sometimes four or five yards in diameter,so common in the woods of the Wrekin? { The Wrekin is a large hill in Shropshire see image below-Dal }. they are places where wood has been burned for charcoal. Always examine such spots,as you may find some rare plants growing upon them which scarcely grow elsewhere. Here for instance is Flammula carbonaria. They delight to grow on these charcoal spots and I don't think you will find them growing elsewhere. Mr.Worthington Smith tells us that it is very rare It is not mentioned in Mr,Berkley's  ' Oulines of Fungology'. Here is a beautifully marked variety of Polyporus perrenis,also very rare ,it is tinted with rich sienna,chocolate and black;it is found only in these charcoal rings.

Look at that splendid,bright orange-yellow fungus growing among the moss in large tufts as it were.Each plant has a slender stem with short branches;what a number are growing together with roots or lower portions of the stem closely intertwined! this Clavaria fastigiata. here we meet with the sticky  Gomphidius viscidus,and here with the handsome Tricholoma scalpturatus {now T,scalpturatum -Dal} and the lovely Tricholoma rutilans. I am obliged to use Latin names as there are no English ones.

The Ground here is covered with Clitocyle fragrans,it smells like newly- mown hay. Now we meet with the various Boleti. {Bolete}, look at the under surface you will see it is riddled with numerous small holes very unlike the gills of mushrooms and agarics. we shall find Boletus luteus,B.flavus.B.edulis,B.scaber,the handsome but poisonous luridus. Boletus edulis as its name implies is very good to eat and is perfectly wholesome,so too is B.scaber and B.luteus.

{  Important---Fungi should never be eaten unless you can positively indentify them there are many poisonous and dangerous ones that look similar to those which are edible. -Dal}

Boletus luridus. This fungi can be eaten when cooked but would make you ill when eaten raw.It can also be mistaken for other more poisonous species.

Holloa! what bid has just fled before us? it is a woodcock evidently;and has probably lately arrived in this country from the south of Europe,although woodcocks occasionally reside here throughout the year. The woodcock is a very handsome bird with its dark mottled brown plumage,long bill and large,full,black eyes. " What do these birds feed upon?" asked Willy.  You often here people say they live 'upon suction',and 'do not eat any food' That I fancy is a common belief  among sportsmen. It is, however, altogether a mistake,for these eat quantities of earthworms,and has frequently been witnessed.

I will give an instance of this in the case of a woodcock kept in an aviary somewhere in Spain. " There was a fountain perpetually flowing to keep the ground moist and trees planted for the same purpose;fresh sod was brought to it;the richest in worms that could be found. In vain did the worms seek concealment; When the woodcock was hungry it  discovered them by smell,stuck its beak into the ground but never higher than the nostrils;drew them out singly ;and raising its bill in the air, it expended upon it  the whole length of the worm,and in this way swallowed it smoothly without any action from the jaws. The whole operation was performed in an instant,and the action of the woodcock was so equal and imperceptible  that it seemed doing nothing;it never missed its aim;for this reason;and because it never plunged its bill beyond the orifice of the nostrils;it was concluded that the bird was directed to its food by smell"

There is one very interesting point in the natural history of the woodcock which I must not forget to mention. The old birds sometimes they carry their little ones  from the place where they are hatched down to soft marshy places to feed on the worms and insect larvae found there;they take them in the evening and return with them in the morning. " But how do they carry them?" asked May. Some observers have said they are carried in their claws.,but Mr. St.John,maintains that the little birds are clasped between their thighs.

" Is it not a difficult thing to tell the difference between the male and the female woodcock ?" asked Willy. Yes I do  not think it is possible in every case  to tell the difference the male bird is smaller than the female of the same age and there are slight differences in colour of the plumage,but as you may meet with these birds of different ages,and as woodcocks are  much subject to variation of plumage,it is difficult to pronounce  whether this woodcock is a male  and that a female. 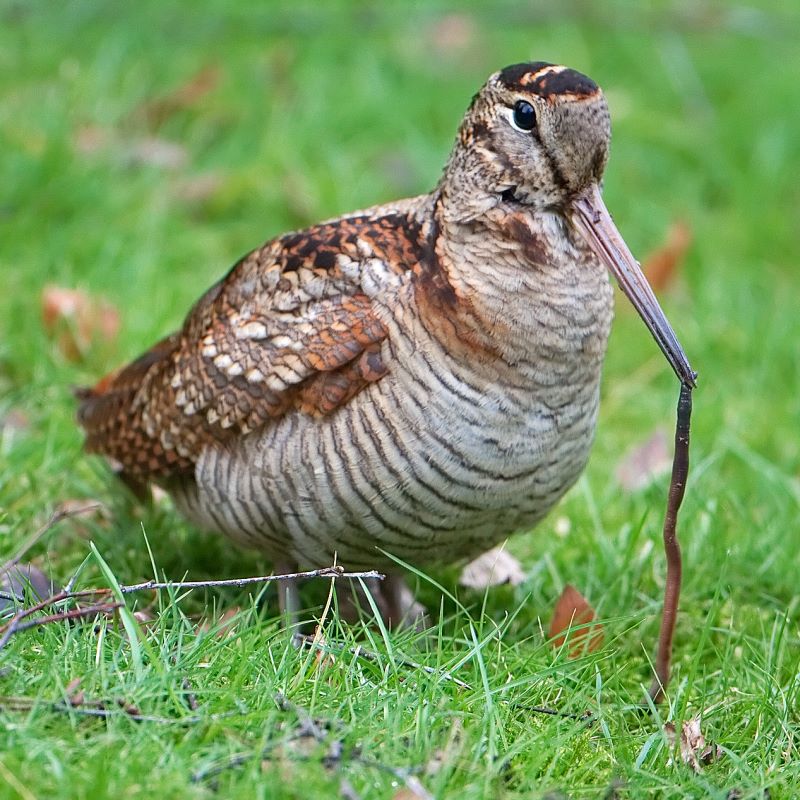 " Oh! papa what are these ring marks on the end of this bit of timber upon which we are sitting?" asked  Willy. these rings or zones represent the various growths made every year by the tree when it is growing each zone being the produce of one year. As the wood ceases to grow for some months in the winter, a distinction in appearance between the last wood of the former  and the first wood of the succeeding year is occasioned; so that; in our country at least;the age of a tree can be ascertained within some limit by counting the number of zones;there is;however;great difference in the size of the same species of trees;even of the same age,and great difference too in the width of the zones; indeed you can this in the case of the wood we have been sitting upon. See how the zones differ,how broad some are,how narrow are others;nay;even in one year you see how the zone varies. The subject of the growth of trees is very interesting and I would advise you,when you get older to pay attention to it.

Here is another species of fungus,and a species I am very glad to find in the woods of the Wrekin,though it grows but sparingly. Take it up ,turn it over.How curious! the underside is not a series of gills,as in Argaricus,nor a substance perforated with tiny holes like in Boletus. It is formed of a quantity of delicate white teeth or spines;see how beautiful they are and how easily broken. The spines are like miniature awls. it is called by its prickly appearance of the under surface the 'hedgehog mushroom' Hydnum repandum.

" Is it good to eat ?" asked Jack. It is in my opinion one of the most exquisite fungi that grows,and the most curious thing about it is that its flavour strongly resembles oysters. Last year we had some of these fellows cut up in bits about the size of a bean and stewed in white wine sauce. The sauce we ate with a beefsteak at dinner,and I do think that as far as flavour is concerned one might pass it off as oyster sauce without anyone finding it out. Not that the hedgehog mushroom sauce is really as good as oyster sauce ,but,as I said, the flavour strongly reminds me of it,nor do I think that any fungi,delicious as they are,can ever come up to oysters the ne-plus-ultra of exquisite food.

It is getting towards evening  and we must not linger much longer. How many eatable fungi have we got? Let me count. There are four kinds that we gathered in the meadow before we entered the wood . We will take them home, they will come in very well either at breakfast or at dinner time . The other fungi we take home and compare them with descriptions and drawings in my books.

The Wrekin as it is today

And now are rambles have ended, I hope that you have enjoyed them from the beginning of our strolls in April right through to October. There has been much to see and much to admire in the countryside of Shropshire. Thank you for visiting.