The stories are taken from the book ' Country Walks of a Naturalist' {with his Children},not in copyright and courtesy of the Gutenberg project. The Author the Rev.W Houghton,was based in Shropshire { English midlands}. The book was published in the 1800's. Where necessary I will add additional information such as species names that have changed which will appear in brackets. Photographs which may have been added will have their licenses attributed to them. Those that do not have any attributions are taken from the book like the one immediately below. Please enjoy.

We join the Rev Houghton as he talks to his children-----

How pleasant is the season of autumn,with its yellow fields of ripe corn,and its orchards laden with the fruits of the apple and the pear. But now the golden grain is safely stored. The birds too, have done singing,with the exception of the robin and the hedge warbler which even in the winter occasionally cheer us with their welcome notes.  There are yet ,however, a few wild flowers to interest us,and the ferns are still beautiful.

The various kinds of fungi are springing up in the fields and woodlands;it is a charming day for a stroll;we will drive to the Wrekin { a large hill and landmark}, and explore the woods at its base. I am sure we shall be able to meet with many pretty forms. The woods are rendered extremely beautiful by the rich autumnal tints  of the foliage. We will go through this wicket and follow the path in the direction of Ten-Tree-Hill. Now who will be the first to find the bright scarlet Fly agaric?, it is a poisonous species,though so beautiful. We will put the wholesome fungi in one basket and the suspected ones in another.

Here you see is the elegant parasol fungus,with its tall stem and top spotted with  brown flakes;it is a most delicious one to eat, and in my opinion is superior to the common mushroom. " Shall we find the beefsteak fungus,papa?"  said Willy. I have never seen one growing here. The beefsteak fungus prefers to grow on very old oak trees,and it is moreover,by no means common. It is so called  from its resemblance to a beef steak when cut through; a reddish  gravy-like juice flows from the wound,and I think the whole fungus when young very inviting. I have on three or four occasions eaten this species, but I do not think it a very palatable one,though perfectly wholesome and doubtless nutritious.

Here is a quantity of Amanita phalloides,very beautiful with its green tints and white stems,but I would not like to eat any of this kind. Do you notice what a very unpleasant smell it has?

What a number of animals are nailed to that beech tree! let us see what they are ;two cats, three weasels,two stoats,four jays.two magpies,two kestrels,an owl and a sparrowhawk. { It was a common practice for gamekeepers to hang up their victims in days gone by,this in order to show evidence to their employer that he was doing his job -Dal}. The keeper has trapped or shot these as enemies to the game,and no doubt,with the exception of the weasels,owl,and kestrels,the other animals often destroy young pheasants or suck their eggs.

Still I would not like to see all animals destroyed that occasionally harm game preserves. Game keepers have strong affections for their hares;partridges and pheasants;and consider all other wild animals as either enemies or beneath notice. Indeed,a gamekeeper's zoology is confined to five things;Pheasants,Partridges,Rabbits,Hares and Ant's eggs.

Ah! I do think I espy about twenty yards ahead the fly agaric Amanita muscaria. To be sure;here is a fine lot;some just appearing above the ground in the form of scarlet balls;others fully expanded. How splendid they are ! You notice many white patches on their tops;let us see how these patches are formed. Here is a specimen hardly showing itself. I will dig it up;there,now you see, the whole fungus is wrapped up in a thin white envelope.This is called a Volva,from the Latin word volvo,indicating " I role up ". when the Volva breaks it leaves scattered patches at the top. the gills are white or yellowish and the stem is bulbous. This is not a very common fungus,it is,however, frequent enough in the woods about the Wrekin.

The effects of this fungus upon the person who has eaten it,are of an intoxicating nature. Dr.Badham,who used to eat various kinds of fungi,had written a good book on wholesome kinds,once gathered some specimens of fly agaric. He sent them to two lady friends, intending to call soon afterwards and explain that he had sent them on account of the beauty solely. Dr.Badham did not come; but these two ladies said  " Oh,of course Dr.Badham,would never send us anything unwholesome,let us have some cooked for tea" So they had some cooked and ate thereof,and were taken very ill. The bad effects,however, soon passed away.

The Wrekin {Shropshire as it is today}

Look at that little squirrel. See how nimbly he climbs the tree.Now he hides in a forked branch and he thinks we do not see him. Well I must not forget to tell you about this fungi growing in this spot so plentifully.  It is called fly agaric  because a decoction of it was once used to kill flies. The people in Siberia swallow portions of it to produce intoxication.

Here is another species,closely related to the one we have been considering,and not unlike it form,this is the blushing agaric, Amanita rubescens. {Known today as the blusher-Dal},you see its top is also covered with whitish flakes or warts;and persons not in the habit of noticing may confuse this with the other species. Now look I will cut this specimen with my knife,and bruise it slightly;do you see how it changes to a reddish hue;thus at once distinguishing it from its unwholesome relative? This quality gives the name to the fungus. The blushing agaric is perfectly wholesome.

Do you remember how often we had it cooked for breakfast last autumn and how delicious it was for both breakfast and dinner?. I would never,however, advise persons who have not  paid attention to the study of fungi to gather and eat them without asking the opinion of someone who has knowledge on the subject; and I am sure ,you children,would never think of eating any kind,that you have not first brought to me.

There sits the squirrel. Let us make show us how he can leap from bough to bough. I clap my hands and Jack throws a stone;and off the little fellow goes;taking wonderful leaps. As winter approaches the squirrel will be busy laying up stores,for consumption during that season. Such as nuts ,beech-mast and acorns. For the greater part of the winter the squirrel is dormant,on fine days,however, he ventures out of his retreat in the hole of a tree,visits his cuboard,cracks a few nuts,and then goes to sleep again. The nest of the squirrel is made of moss,leaves and twigs curiously intertwined and generally placed  between the forked branches,the young ones two or three in number are born in the month of June. { The squirrel's nest is called a drey.}.

A gentleman In a letter to Mr.Jenyns ,says, " A pair that frequented a tree opposite the window of one of the rooms,evinced great enmity to a couple of magpies with whom they kept up perpetual warfare,pursuing them from branch to branch,and from tree to tree with untiring agility. Whether this persecution arose from natural antipathy between the combatants, or from jealousy of interference  with their nests is not known." 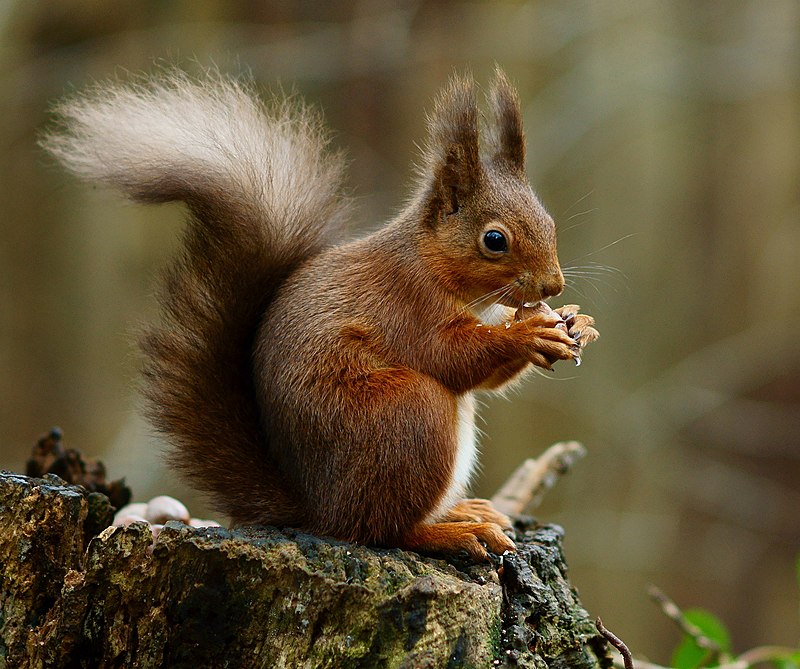 We leave our family as they continue to explore fungi. We will rejoin them on the page October-2,and discover more facts about fungi.