The stories are taken from the book 'Country Walks of a Naturalist' { with his children} by the Rev Houghton.This book is not in copyright and is courtesy of the Gutenberg project. The Rev Houghton was based in Shropshire {England}. The book was published in the 1800's. If there has been changes to species names they have been updated by me,along with other relevant information. Other wise the story is produced as it was in the book.

Our naturalist along with his children are up on the moors on this walk and this is where are story begins----------.Let us now look for the coots and water-hens,which love to dabble among the weeds of these pools, and to hide among the hedges and bulrushes which so thickly skirt them. Look how rapidly the swifts or 'jack-squealers' as country people call them;are gliding by; Do you remember when we were watching the swallows and martins that we thought of the swifts. Look at their beautiful scythe-like form of the wings; the tail;you see,is slightly forked, but the bird has the power of bringing the feathers together;so that sometimes you can not see the cleft form. I generally see the swifts in the nieghbourhood  about the 5th of May, this year Mr.John Shaw tells me he saw some in Shrewbury as early as the 23rd of April. Although they come to us the last of the swallow family, they leave the soonest. By the middle of August most of the swifts will have left us. { The swift is now in a different family to the swallows and martins}.

This bird has remarkably short legs; and I remember more than once taking one of the ground as a school boy, for unless it raised a little above the level of the ground,it finds it very difficult to mount upwards by reason of its extremely short legs and long wings; if we had a  swift in our hands, I could point out how it differed from the rest of the swallow family in the structure of its feet;in the other members  the four toes are arranged three before one behind; in the swift all the four toes are directed forwards.

There is another kind of swift -the white bellied swift-which has on a few occasions been noticed in this country.It is rather larger than the common swift, and has wings of greater length, and fly even more rapidly.

Hark !  I hear the noise of a coot proceeding from the reeds of a pond. I dare say if we keep quiet we shall get a glimpse of her. There she comes;and do look;she has a lot of young ones with her;little black downy things they are, as we should see if we are near enough to examine them.The old birds have a naked white patch on the forehead, and a therefore called 'bald coots' You can see the white patch now she faces us , and the sun is shining; the body is dingy black tinged with dark grey;you notice a little white about he wings. The feet of the coot are curiously formed, each of the four toes are partly webbed,having a membrane forming rounded lobes; the claws are very sharp, and the bird does not hesitate in using them if you catch hold of it carelessly; So Col. Hawker, gives the following caution to young sportsmen----"Beware of a winged coot, or he will scratch you like a cat"

I never saw a coot dive;and I think it seldom does. Water -hens,every one knows are frequent divers.

The old bird is  pulling up some of the weed of the pool for the young ones;how carefully she attends to them; the heads of the little ones are nearly naked,and of a bright orange colour mixed with blue,but this brilliant colouring only lasts a few days. The nest is made of broken reeds and flags {Iris} and hidden among the tall rushes and edges in the water.

Bewick mentions the case of a coot having built her nest among some rushes, which were after loosened by the wind, and of course the nest was driven about and floated on the water's surface, in every direction; not withstanding which, the female continued to sit as usual, and brought out her young upon her movable habitation; See now they have all gone away to hide among the reeds; they like to come out on the open water late in the evening, and it is not easy to observe them in the day time.There are plenty of water-hens or moor-hens in these reedy pools.They are not so peaceful as the coots, for they have been known to attack young ducklings. There one swims,jerking up its tail,which is whitish underneath;and nodding its head. The moor-hen is a smaller bird than the coot,though resembling it in form and habits.  The feet however, are very different ,for, instead of the toes being furnished with a lobed membrane they have a continuous narrow one down each toe { they are similar to those of a hen}.

Moorhens have been known to remove their eggs from the nest,in order to add to it, and then replace them again. Mr Selby relates this interesting account:- " during the early part of the summer 1835, a pair of water-hens built their nest near the margin of the ornamental pond at Bell's Hall,a piece of water of considerable extent,and ordinarily fed from a spring at a height above, but into which the contents of another large pond can occasionally be admitted. This was done while the female was sitting;and the nest had been built when the water level was low. The sudden influx of this large body of water from the second pond raised the water level several inches, so as to threaten the speedy immersion and consequent destruction of the eggs. This birds seemed to be aware of, and immediately took precautions against so imminent a danger;for when the gardener,upon who's veracity I can safely rely;seeing the sudden rise in the water, went to look after the nest,expecting to find it covered and the eggs destroyed,or at least forsaken by the hen,he observed,while at a distance,both birds busily engaged about the brink where the nest was placed;and when near enough, he clearly perceived  that they were adding,with all possible dispatch,fresh materials to raise the fabric beyond the level of the increased contents of the pond, and that the eggs by some means had removed from the nest by the birds, and were then deposited on the grass, about a foot or more from the margin of the water.He watched for some time and saw the nest significantly increased in height,but I regret to add that he did not remain long enough,fearing that he might create alarm,to witness the interesting act of replacing the eggs,which must have been effected shortly afterwards;for upon his return in less than an hour,he found the hen sitting upon them in the newly raided nest. In a few days afterwards the young were hatched,and,as usual, soon quitted the nest and took to the water with their parent. The nest was shown to me in situ very soon afterwards,and I could then plainly discern the formation of the new with the old part of the fabric" 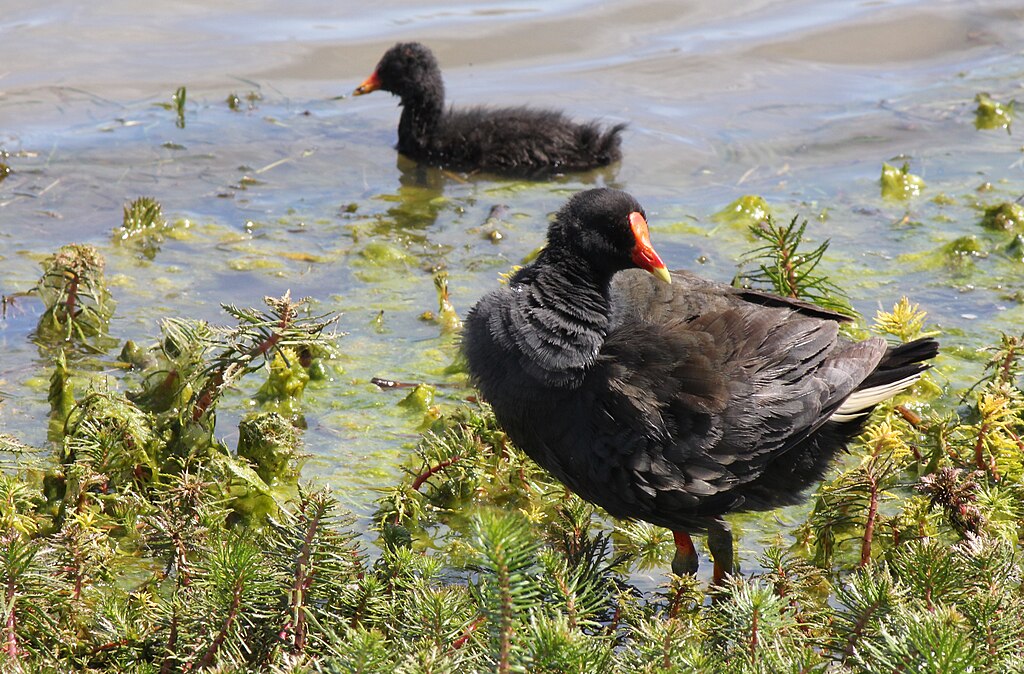 " What is that little bird in the water?" ,asked Jack. " Oh ! ,he his suddenly gone; do you see that curl in the water where he dived?" It was no doubt a dabchick, then, from the way you describe it,though I was not in time to see it before it dived,if we keep quite still and silent I dare say it will appear again. There it is dabbling in the water in search of water insects that are found among the weeds. Another name for the bird is the Little Grebe;several species of grebe have been found in this country;the great crested grebe is a very handsome bird and frequents lakes and rivers;but of the five British grebes,the little dabchick is by far the commonest.

The feet of these birds are peculiar,the toes are not connected together by a web,as you see in ducks and geese,they are however, united at the base, and each of the three front toes is surrounded by a broad continuous membrane;the lower part of the leg is also very flat;the legs are placed very far backwards,so that these birds almost stand up upright. The wings are very short and seldom used for flight,however,they are admirable swimmers and divers,and, pretty,lively little birds.

The plumage of this little grebe varies according to the time of the year.Now, in the summer weather,the head,back and neck are very dark brown;the cheeks and front of the neck is a rich chestnut;chin jet black;in the winter they loose this chestnut colour, and are then of a ;light olive grey colour,and white underneath. Formerly the two different states of plumage were thought to mark two different species..

The nest as Mr. Gould tells us, is a raft of weeds and aquatic plants carefully heaped together in a rounded form.The young ones have delicate rose-coloured bills and harlequin -like markings on the body and rosy white breasts. " So active  and truly aquatic is the dabchick, even when they are only one or two days old, that it is almost impossible to see it in a state of nature;for immediately the chicks are hatched,they either take to the water of their own accord,or cling when not more than an hour old to the backs of their parents;who dive away with them out of harms way" Mr Gould mentions that a friend of his,when out on a fishing excursion with him, once shot a dabchick  as it dived across a shallow stream;on emerging wounded;on the surface;two young ones clinging to the back were caught by Mr Gould in his landing net. { Shooting birds was quite legal at the time this story was written in the 1800's}.

So rapid is the diving that they can avoid the charge of a gun;they then rise again " With only the tips of their bill above the water,and even these generally concealed among some patch of weeds or grass". The grebes have a peculiar habit of plucking  off the soft feathers from the underside of their body and swallowing them. Why they do so is not known. { It is now thought that this aids digestion}

" What is this pretty pink flower?" asked May," With long trailing stems and leaves broadly arrow-shaped?,from its resemblance to that beautiful convolvulus in the garden I would think it is a smaller kind of that plant". You are quite right it is a convolvulus and its English name of Field bindweed is expressive of its clinging habit of this plant;see how tightly it has wrapped itself round this tall blade of grass;Although a very pretty plant with its pink flowers and darker plaits,its arrow-shaped leaves,and its fragrant smell,it is a troublesome weed to the farmer.There is the greater bindweed,with its large bell-blossoms,sometimes as white as snow,sometimes striped with pink,sometimes almost rose coloured,so often seen growing profusely over the tallest bushes.

Both kinds of bindweed's,are however, mischievous ;weeds.The large kind may be seen in flower as late as September. Some of the bindweed family ,I ought to say,are valuable in medicine,there is for instance the species jalapa and scammonia,both of which are extensively used in medicine;the former a South American plant and the latter a Syrian one. Then there is the so-called sweet potato,which is the root of the species batatus,used in China and Japan, and other tropical  countries as a wholesome food.Strange it seems that plants so closely related  should differ so much in their properties,

There is also a series of pages educating children about nature currently 14. These pages cover subjects such as mammal colouring. Birds,nest and eggs.Insects and their eggs and larvae and many other items.See Children/nature-1 Children/nature-2 etc etc.

Children get to know nature.

Children get to know trees.