The story is taken from the book 'Country Walks of a Naturalist {with his children}', by the Rev.W Haughton { not in copyright} and courtesy of the Gutenberg project. The Rev. Haughton was based in Shropshire {England}. The book was published in the 1800's, and only updates of species names and other relevant information is added by me.

Our story begins---with the words of Rev. Haughton

Such are some of the most significant plants near our pond. It looks to contain some fresh water polyzoa { a Phylum of aquatic invertebrate animals now referred to as Bryozoa-Dal},than which there are few more beautiful tenants in the water.. here is a young one one the leaf of this Persicaria;do you see it? I put it into my bottle. Now look it has lately been hatched from that round egg with curious hooks around its margin. It is called Cristatella.

At present there are only three individuals in the heart shaped covering, but additional ones will bud out of these three, and others from these last,till the whole colony may number as many as sixty individuals,being fully an inch long.the mouth of each is placed between the tentacles ,which have upon them,running down each side, a very great n umber of minute hairs or cilia,to which you may remember,I have alluded to before.

The colour of the colony is yellowish white,sometimes brownish white. It is a most exquisite little animal, or rather colony of little animals;for, though there are several creatures in one house,as it were,each is independent and separate of its neighbour.You will often find other forms of Polyzoa {Bryozoa} in clear ponds and mill pools;sometimes you would suppose,you were looking at a mass of sponge,as in the case of Alcyonella { now Plumatella fungosa sometimes called Fungoid bryozoan-Dal }.or the creeping root of some weed,as in Plumatella or Fredericella. but when the sponge- like mass or rootlets are placed in water you will observe numbers of little animals to show their heads and tentacles above the mass or from little holes in the creeping rootlets.

Ah! what have we here? Do you see those long ribbons of floating grass about a yard from us? Do you notice some of the ribbons to be bent and folded here and there? between each fold we will find the egg of a newt. let me get a bit of this grass ribbon. There. I unfold it where it is creased;and you see a transparent glairy substance,within which is a round yellowish egg. here again is another. the leaves of Persicaria,also,are often selected by the female newt ,for the purpose of depositing her eggs. here you see is a leaf folded up;between the folds is another newt's egg. I have never seen the newt in the act of laying her eggs,but, I believe;it may readily be observed,by placing a female newt any time during the months of May and June in a vessel of water with some leaves of Persicaria. Mr.Bell says " the manner of which the eggs are deposited are very interesting and curious. The female,selecting a leaf of some aquatic plant,sits as it were on the its edge,and folding it by means of her two hind feet,deposits a single egg in the duplicature of the folded leaf,which is thereby glued most securely together, and the egg is thus effectually protected from injury. As soon as the female has in this way deposited a single egg,she departs, and after a short time seeks another;there to place another egg"

The eggs undergo various changes, and the animal, at an early part of its life,has a pair of delicate organs on each side of the neck;these are rudimentary gills,by means of which the little creature breathes. In its very early condition these gills are simple lobes; I ought to sat that this first pair of lobes serve the purpose of the holders by which the little creature attaches itself to leaves and other things.But when it is about three weeks old the gills have many leaf-like divisions;and look like beautiful feathered fringes. The circulation of blood in these gills may readily be seen under the microscope, and will be surveyed with the greatest delight.

By and by the animal buds out its four legs and looses the gills,they do not drop off,but become absorbed ;hitherto it has carried on its respiration or breathing by means of these gills;but how does it breathe now that it has lost them? . The lungs in the inside of the body have been gradually growing larger and fit for breathing the atmospheric air ;for newts when arrived at their full or perfect state,are,you know, chiefly terrestrial creatures,and breath by means of their lungs.When young they are in a fish state,and breathe the air in the water as fish do. If you look at a pond where newts abound, you will see the old ones constantly coming up to the top of the water,gulping a lung full of air and going down to the bottom again.

Full grown newts to not frequent the water excepting for the sake of laying their eggs. The young ones leave the water in the autumn, but I have often obtained young newts with their gills fully developed in the depth of winter. Probably these had been hatched late in the summer and not had time to grow their lungs,so had to keep their gills  and lead the life of a fish during the winter.

" People call newts 'askers',papa", said Willy " and the lads of the village always kill them when they catch them; they say their bite is poisonous ". I'm sorry to say they do; but it is an error to suppose their bite is poisonous. You have yourself handled many specimens; and I'm sure you have never seen one attempting to bite. I do not believe their small teeth and weak jaws can pierce the skin. Four species of newt have been described in this country, the two common kinds are the smooth newt and the warty newt. I think I once found the Palmated newt near Eyton; the male of this species is distinguished from other newts by having the hind legs webbed and by a thin filament at the end of the tail. { There are now three species of newt found in Britain, the Palmate newt, the smooth newt and the Greater crested newt-Dal }

" What is this papa? ", asked Jack " That I have found sticking to the roots of this water reed; they look like the eggs of some creature". They are not eggs but cocoons of common but very pretty little beetle called Donacia. See I will split one open with my penknife. there is a little animal inside;a white,fat,maggoty thing; it has two curious hooks at the end of the tail, it has only just framed its cell, and it is about to change from its larval to its pupal state.Here you see are other maggots among the roots;they have not yet made a cocoon. I will open some more. here is one in its pupal condition. Here is another almost ready to come out as a beetle.

The Donacia,have all a metallic appearance and very beautiful they are,whether blue,red,copper or purple, on the under side is covered with a fine silky down. They are found in great numbers on water weeds, and being very sluggish are readily caught or picked off the plants they frequent by hand. Do you notice those small,flat brown or black dabs so common on almost any water weed you luck up ?.These are planarium worms, and though not of prepossessing appearance generally, are extremely interesting animals to study. These large,reddish oval or round cocoons are the  eggs of the planariae. Here is one of the largest of the family. It is of a milk white colour,beautifully marked with delicate tree-like branches,sometimes this species Planaria lactea is of a light pink colour.

The mouth is not situated where mouths normally are in the forepart of the body but almost in the centre. See, I will place this white planaria on my hand, do you notice that it protrudes something you might perhaps say was its tongue? It is not its tongue ,however, it is a tubular proboscis, and is very strong and muscular,and unlike the soft body of the animal. By means of this proboscis the creature is able to pierce the body of other creatures and to suck out their juices. I have kept planariae under observation, and seen them drive this proboscis through each other. these black and brown dabs often feed on the milky planariae. they are something like the Hydrae in their power of producing lost portions of their bodies. Cut them in two or more pieces and they will grow into a perfect planaria again. These you see do not swim ,but crawl,or glide over the surface of the plants in the water. Some kinds,however,different are able to swim well. we have had a long and successful hunt today ,lets go.

Polycelis felina from Catalonia. a type of Planaria. 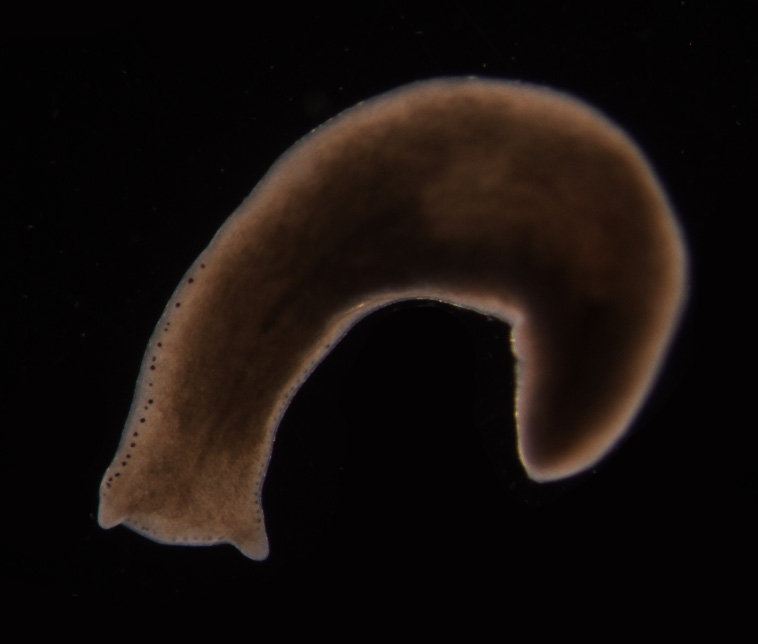