The stories are taken from the book 'Walks of a Country Naturalist' {with his children}. The book is not in copyright and courtesy of the Gutenberg Project. The Author the Rev Houghton  was based in Shropshire {English Midlands}. The book was published during the 1800s and is written as it appears in the book, The exception being, if there has been a change to the species names and other relevant information, which will appear in brackets. Additional photographs that have been added will have their relevant licenses and attributions. Any photograph not attributed are taken from the book. Please enjoy.

On the page Children's nature walk-July -2 we left the family in the fields looking at wild flowers. It is here where we rejoin the family.

Well,jack,you have found something;have you? Ah!, this is a queer plant ,it has queer habits, and a queer name; it is called, 'Jack-Go-To- Bed- At-Noon'. we sometimes call you after another plant, ' Jack-by-the-Hedge'. May, of course, is 'May',or hawthorn blossom , and Robin at home,from him often tearing his clothes, is 'Ragged Robin'.

Another name for the plant you hold in your hand is 'goat's beard';the leaves are long and grass-like;the flowers bright yellow;it is not yet quite eleven'o'clock,and the blossoms are expanded ;they generally close about noon. Look at the colour of the stem,it has a kind of sea green bloom upon it. Well you would never find this plant with blossom expanded  in the afternoon ; so Jack-go-to-bed-at-noon is quite a good name for it.

"And goodly now the noon-tide hour

When from this high meridian tower

The sun looks down in majesty.

What time about the grassy lea.

The goats's beard prompt his rise to hail,

With broad expanded disc in veil

And goes, as peasants say, to bed"

Here we are at a stream; do you see those things at the bottom slowly moving? They seem to be bits of stick. " I know what they are",said Jack, " there is a good fat maggot  in each of these cases;they are caddis worms". Quite right and in time will change to insects. Here is another kind the house is made of small bits of gravel,and is attached to this small stone. I will break open the case;do you see inside a long cylindrical case,with a thin covering. I slit this open with my penknife;now you see the creature inside.

There are  great variety of caddis- worms,and most interesting it is to notice the different kind of houses they. Some of the larvae live in movable cases,as we have seen,some in fixed habitations;the materials too,out of which the different cases are constructed,are different, sometimes they are bits of gravel,or sand,wood,leaves,grass,the empty shells of various fresh water molluscs. The fragments of stick and the small bits of gravel are held together by a kind of cement which the larva spins from his mouth.

Sometimes we may meet with cases made from sand,having on either side long slender bits of rush or stick. A lady once took a number of larvae  out of their cases and placed them in a vessel of water with various materials,such as coloured glass,cornelian,agate,onyx, brass filings, coralline,tortoiseshell,and these little maggoty things made use of and built their houses out of them.

The perfect insect {Caddis-fly} has four wings,and from these being closely covered by hairs the order to which they belong has received the name of Trichoptera,which means, having hairy wings. You must know many of these insects;they are very common near pools and streams. generally they fly in a Zigzag fashion,and have the appearance of moths.

Ah!,here is a splendid bed of for-get-me-not,growing on this bank near the stream. Look at the blue enamel-like flowers each with a yellow centre-eye; the leaves are bright  green and rather rough. There are other species very much resembling this one you may often see in hedgerows and fields;but they are generally smaller plants. This one is the true for-get-me-not. There are several stories about the origin of the name . Here is one;--Many years ago, a lady and a knight,were strolling along a river bank. The lady espied this bright blue flowers on a small islet,I suppose,in a deep river, and wished to possess them. her lover immediately plunged in and plucked the plants,but the strength of the river was too much for him on his return. With a great effort, however, he threw the flowers on the bank exclaiming " Forget me not" and then sank!

" But he lady fair of the knight so true,

And she cherish'd the flower of brilliant hue,

And she call'd it' For-get-me not"

We must proceed with our walk, and not linger to long here,though, I must own, it is hard to tear oneself away from the banks of a gently flowing river .So goodbye to you-

" That blue and bright eyed floweret of the brook,

As we crossed the road we met two men with cage traps and a slender twig covered thickly with birdlime. In each cage was a tame goldfinch which were the decoy birds. The men had only taken one goldfinch for which they asked half a crown{ 26 pence in today's money}. The decoy birds attract other goldfinches by their call note;these sometimes alight on the trap,which instantly closes upon them;sometimes they land on the twig covered with bird- lime,which is so sticky they cannot free themselves from it. { This activity is now illegal and all wild birds are protected by law }.

" Gay plumage ,lively habits,an agreeable form and song with a disposition to become attached to those that feed them ,are such strong recommendations,that the goldfinch has been, and will probably continue to do so, one of the most general cage favourites. So well also do the birds of this species bear confinement that they have been known to live for ten years in captivity, continuing in song for the greater part of the year. The tendency to sing and call make them valuable as brace-birds,decoy birds and call birds,to be used by the bird-catcher with his ground nets,while the facility with which others are captured, the numbers to be obtained, and the constant demand for them by the public,render the goldfinch one of the moist important species included with the bird dealer's traffic."

Mr.Meyhew, says that a goldfinch has been known to exist twenty three years in a cage. the same person tells us that goldfinches are sold on the streets of London from six pennies to a shilling each.{shilling =10 pence}, and when there is an extra catch,and the shops are fully stocked,at three pennies and four pennies each. Only think that it is computed that as many as 70,000 songbirds every year about London;the street sale of the Goldfinch being about one tenth of the whole.

Goldfinches can be taught to perform many amusing tricks,to draw up water for themselves by a small thimble sized bucket,or to raise the lid of a small box to obtain the seeds within. A goldfinch as been trained to appear dead;it could be held up the tail or claw without exhibiting any signs of life;or to stand on its head with its claws in the air;or to imitate a Dutch milk maid going to the market with pails on it shoulders or appear as a soldier,keeping guard as a sentinel. One was trained to act as a cannoneer with a cap upon its head, a firelock on its shoulder, and match in his claw, it would then discharge a small cannon. " The same bird also acted as if it had been wounded. It was wheeled in a barrow,to convey it,as it were,to the hospital;after which it flew away before the company"

Another turned a kind of windmill;another stood in the midst of some fireworks, which were discharged all around it,without showing any fear. When we consider how docile and affectionate some birds become;when we think of their beauty and the sweet music they pour from their little throats;when we consider also of what immense use a great number of species are to man in helping check many injurious insects and caterpillars;does it not seem strange that they meet with so little protection? How often, as you know, we have met with lads and great strong men with helpless fledglings in their hands, which they intend to torture in some way or another. perhaps they will tie string to their legs and drag them about or place them on a large stone and throw at them. To expostulate with them on the wickedness of such barbarous conduct is hopeless;one might as well quote Hebrew to a tadpole!

The goldfinch is a beautiful bird 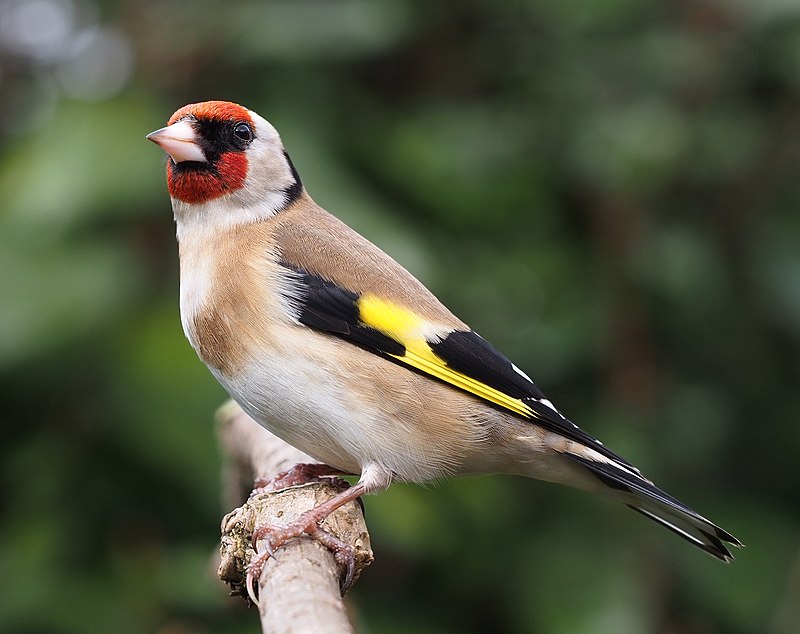 How noisy the grasshoppers are with there incessant shrill chirpings. How thoroughly they enjoy the heat and the sun!  Just catch me one or two.Willy,there, one has hopped just before you, now he is on that blade of grass. Have you got him? No?,well take this gauze net. Now you have him. " How does the grasshopper make that peculiar sound?", asked May If you will get near one of these insects while he his making that noise you will see how he does it. There, one stands on that plantain stem. Do you see how briskly he rubs his legs against the wing covers?. Now he is quiet and his legs are still,so it is evident that the friction or rubbing of the legs against the wings causes the sound. I rub the thigh of this specimen in my hands against the wing. You distinctly hear the shrill sound.

It is the males only that make this noise the females are mute.Some people have described another organ than seems to increase the sound. I have sometimes placed both field crickets and grasshoppers under a tumbler,and supplied them with moist blades of grass; it is curious to see how fast they eat them. You should remember that the grasshopper is a relative of the locust to which, indeed, it bears a resemblance, though the locust is a much larger insect.

There are several species of locusts,and are all are extremely injurious. You have read in the Bible of the fearful damage they are able to cause to trees and various crops. It is seldom that locusts visit this country,happily for there is no greater insect scourge in existence. Our green grasshopper is also related to the cricket,so merrily noisily in dwelling houses. crickets are very difficult to get rid of once they have become established  in a house.Like many noisy persons,crickets do not like hear anybody louder than themselves,and some relates that a woman who had tried in vain,every effort she could think of to banish them from her house,at last got rid of them by the noise made by drums and a trumpets,which she procured to entertain her guests at a wedding. It is said ,but you do not need believe the story, that they instantly forsook the house, and the woman heard from them no more.

Possibly some half dozen women in the house would have had the same effect without the musical instruments ! What do say to that idea May ?  " That is too bad of you Papa,but you know  you are only joking"