The stories are taken from the book 'Walks of a Country Naturalist {with his children} Not in copyright and courtesy of the Gutenberg Project. The author Rev Hougton was based in Shropshire { English Midlands}. The book was published in the 1800's and all that has been added are updates of species names and other relevant information which will appear in brackets otherwise the stories are printed as they appear in the book. Additional photographs will be accompanied by the relevant licenses and attributions. Those with no such accompany are taken from the book.

The Rev Haughton and his children are still up on the moors,it is here that we rejoin them------

Look at these spiders'webs on the hawthorn hedge,they are formed of delicate silken threads, and are of a long funnel shape.The spider occupies the bottom part and soon rushes up should any insect get in to the trap,and quickly rushes back down and escapes at the back door if your hand enters the front . The top of the funnel is spread out into large, broad sheets, and the whole snare is attached by silken cords to the twigs of the bushes.

This is a snare and residence of a good sized species, the Agelena labyrinthica,. Such webs are common on hedges, on grass,heath and gorse. Now you must distinguish between spiders' nest and spider's snares.The very common wheel-like webs which you can see abundantly on hedges,are snares or traps for insects, and beautiful they look on a dewy morning all strung with liquid pearls. Here under this oak are a number of old acorn cups of last Autumn's produce;the acorns have fallen out and the black cups remain.  Do you see a delicate spider's web filling this cup,inside are a quantity  of tiny round eggs, and a small spider is keeping guard within;this is a spider's nest. Many spiders spin cocoons for their little round eggs,place them in various situations;and leave them;others show the greatest care for them and carry them about wherever they go.

The cocoons of the species whose web or trap we are now looking at are made of strong white silk, each cocoon containing perhaps a hundred round eggs rather yellow in colour. they are fastened to the inside of a web that the spider spins by means of silken pillars formed by a number of threads closely glued together. The sac containing the cocoons is fastened to the grass or to other objects,and partly hidden by a few withered leaves. " For the purpose of securing their prey " says Mr. Blackwell,the author of a splendid work on 'British Spiders' " spiders have recourse to divers expedients. Numerous species run rapidly  about in quest of those objects which constitute their food;others approaching their victims  with great circumspection spring upon them from a distance; some ;lie concealed in flowers or among leaves seizing such insects as come within their reach;and many species procure a supply of nutriment by means of complicated snares of their own fabrication"

Of these snares the most beautiful as I said,are the 'wheel within a wheel' nets of the various species of Eperidae. 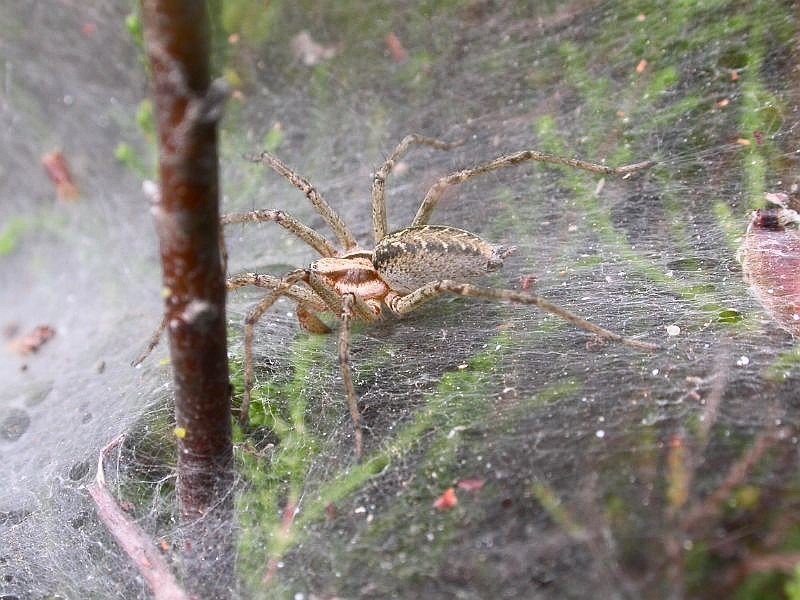 " What are those spider-like things " ,asked Willy," With long thin bodies you often see skating along the water.? They are something like spiders". They are not spiders at all,but insects called water measurers from their peculiar habit of taking a short skate on the surface of the water  and then stopping,having measured that distance,off they go again;However, many spiders  do run along the surface of the water,and you know there is one ,the great water spider,that lives habitually  in it. Some years ago I had one of these water spiders in a glass vessel of water and saw it spin its curious dome-shaped web which it attached to the sides of the glass and some weeds.

These domes are formed of closely woven white silk,in the form of a diving bell or half a pigeons egg,as Dr.Geer has said, with the opening below. it looks like half a ball of silver, this appearance due to a quantity of air. It is, in fact, a huge air bubble surrounded by a covering of white silk,and, as you might suppose,a very interesting and pretty object. Within the silver dome the spider places her eggs,perhaps a hundred or more in number,which are enveloped in a cocoon,this being attached to the inner side of the dome.

" But how " said Jack " is the bubble formed? Where does the air come from?" You have asked a very interesting question,and one that can be answered; for the question was set at rest by Mr. Bell, an excellent observer, and well known naturalist,about twelve years ago,if I remember rightly. he found that the old spider actually took the air down with her from the surface of the water,and deposited it in her domed house. I shall now quote Mr. Bells words. " the manner in which the animal possesses itself of the bubble of air is very curious,and,as far as I know,has never been accurately described. It ascends to the surface slowly assisted by a thread attached to a leaf or some other support below and to the surface of the water. As soon as it comes near the surface of the water it turns with the extremity of the abdomen upwards,and exposes a portion of the body to the air for an instant ;then with a jerk;,as it were,;a bubble of air;

This bubble of air is not only attached to the hairs which cover the abdomen,but is held on by two hinder legs,which are crossed at an acute angle near their extremity;this crossing of the legs takes place at the exact instance the air is seized. The little creature descend than more rapidly,and regains its cell,always by the same route turns the abdomen within it ,and disengages the bubble"

Spiders have strong jaws;at the bottom of each hooked jaw there is a small sac which contains a poisonous fluid,this fluid is conveyed by a narrow channel from the sac along the jaw and is pressed out at an opening or slit at the tip of the fang into the wound inflicted on its victim. The feet of spiders are generally terminated by two or more claws furnished with teeth; by means of these combs the animal is enabled to manage the threads of its web with great dexterity and efficiency.

Our family now come down from the moors-----Let us be off to the fields once more ;the sun is very hot but we can find refreshing shade under the trees when we are tired. What is this beautiful little plant with bright scarlet flowers fully expanded? It is the scarlet pimpernel,or 'poor man's weather- glass',for on rainy days ,and even before the showers are coming, the little plant conscious of their approach,closes up its flowers. Other wild flowers, such as the convolvulus,close before the rain.

The little pimpernel however,is supposed, to be the best barometer. there is another thing about the pimpernel;you will not often see its blossoms expanded after three'o'clock in the afternoon. In other countries,also, the regular closing of the flowers has been noticed by Dr,Seeman, who went as a naturalist on one of the Arctic Expeditions,noticed the flowers to close during the long days of an Arctic summer. " Although", he says " the sun never sets while it lasts, the plants make no mistake about the time,when if it be not night,it ought to be ,but regularly as the evening hours approach,and when a midnight sun is several degrees above the horizon, they droop their leaves,and sleep even as they do at sunset in more favoured climes."

Look at the bright scarlet flower,with its small  purple eye. Excepting poppies,with their dazzling brightness;I do not think there is another wild flower that has scarlet petals. However, the petals are not always red, there is a white variety with a purple eye and another having a dark blue blossom.

In July -3  we will rejoin our family looking at more wild flowers and the caddis- fly.