Leaf miners belong to the Family Agromyzidae. World wide there are 2,500 species that are known to exist.

Search the leaves of bramble { blackberry} in July to see if the activity of an insect larva known as the leaf miner, can be encountered. It is not the insect larva itself that can be observed but the tell tale signs upon the leaf by way of twisted lines. One kind begins very narrow, but generally widens out as it proceeds, turning this way and that until its twisting turning course measures up to 3 inches {6cm} long. This work is carried out by a tiny caterpillar, which eats away the soft inner tissue of the leaf but not the transparent epidermis { outer layer}.

This tunneling or mining, which gives these creatures their common name, becomes filled with air which allows the inner mine to be seen easily , as a white marking upon the darker green leaf colour. When the larva begins its mining it is very very small, but as it grows bigger, it excavates for itself a wider and wider gallery.

The tell tale twisting marks of the leaf miner

When the season for pupation is at hand, the larva quit the leaf, which has provided them with food and shelter, and, spins itself in some safe retreat, a flattened cocoon, in which it changes into a pupa.

After two or three weeks a moth emerges. It is only a quarter of an inch long with brownish yellow forewings becoming purple towards the tips and a pale yellow band beyond the middle. 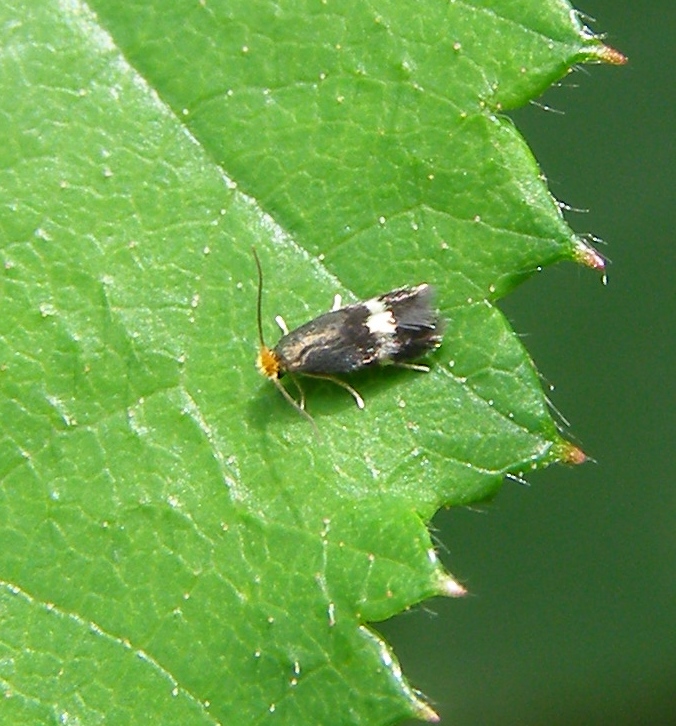 The moth is Stigmella aurella formerly called Nepticula aurella. The hind legs are furnished with long fringes, a peculiarity not uncommon in insects of various kinds.

Once you have noticed the tracks of leaf miners and now recognize them , you will soon discover they may be encountered almost anywhere. They appear on the foliage of buttercups,hogweed, dock, celery and many other wild and garden species. Most of the leaf miners turn out to be moths or two-winged flies. Each species seeming to prefer their favoured species of plant to feed on. There are leaf mining sawflies and beetles.

Holly leaves in many locations, including gardens are often mined by the larva of  a two winged fly,Phytomyza ilicis. During the spring, summer and winter many a holly leaf is seen to be blistered, the blister sometimes extending over a considerable proportion of the upper surface.

In late April or May the fly lays its eggs in young leaves. The fly has to wait for a flush of young fresh leaves before it is possible for it to pierce the surface of the tough leaves to deposit her egg. the resulting maggot then begins to devour the soft tissue inside the leaf. Two or three galleries are often found within the leaf.  The larva of the holly fly is preyed upon by parasitic wasps and also taken as food by blue tits. If the larva have been fed upon by the the tiny parasitic wasp larva the emergence hole will be much larger than would be made by the fly they have replaced.

I conclude with an extract from the book ' House ,Garden and Field Collection of Short Nature Studies' by L.C.Miall [1904} which explains the apparent lack of holly leaf miners at certain times of the year. ---" For a long time I could find no trace of the insect, eggs, larva, or pupa during late summer and autumn. The flies emerged in June, but the blisters never appeared before November. What went on during this interval? Was there perhaps a second brood, fed upon a totally different plant? Every method of observation was tried without success. Once our attention was directed towards little dots on the under side of the leaves, which looked like the holes made by a small egg laying fly, but these turned out to be only pricks of other holly leaves, made in the season of high winds."

" The puzzle was at last solves by Mr. T.H. Taylor, who discovered the young and minute larva in September, and this supplied the part of the story which had escaped our notice. The egg laid in June by the newly emerged female fly on the underside of the midrib of the holly leaf come to its full size, never on an old leaf. The place where the leaf is pierced {probably by the larva} after wards comes conspicuous as a large red spot. as soon as it hatches out, the larva bites its way into the vessels of the mid rib, and no doubt finds itself very well off there, getting complete protection and an abundant supply of liquid food and air, without trouble or anxiety. It travels slowly along the vessels and may take months to cover half an inch."

" At length it turns sideways, quits the vessels of the midrib, and passes into the web of the leaf, where it begins to feed on the green cells, soon after this a small blister begins to show, and first catches the eye of the poring naturalist, who had been searching all the time for blisters, and never dreamt of examining the midrib of the leaves"