Structure of a wasps nest. 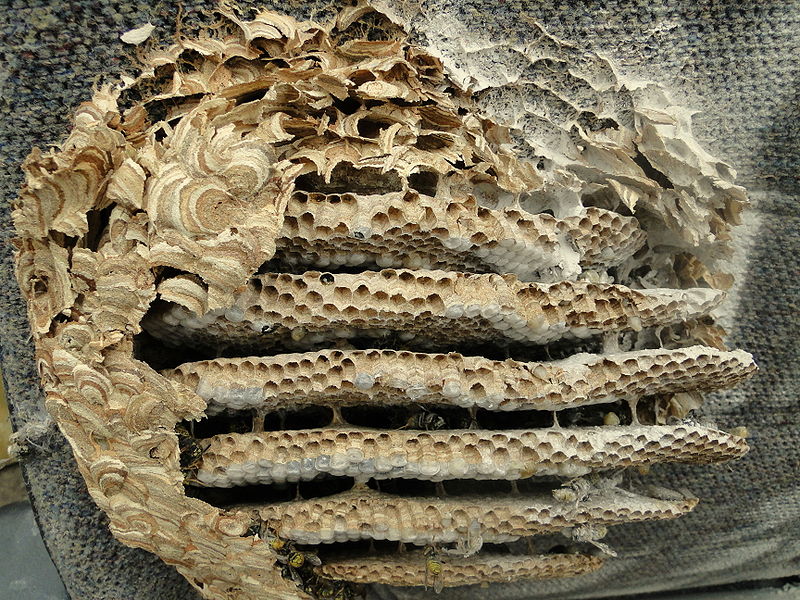 On the page children nature-6 wasp-1 we reviewed the wasp its key features and insects that imitate them. In this article we review the lifestyle and nest of the social wasps.

The population of a wasps nest towards the end of summer will contain numerous inhabitants, which will include the original queen {founder of the colony} workers {very numerous} drones {males} and the young queens which will continue the species during the following year.

In the early autumn the young queens will leave the nest to mate with drones, and once this has been achieved she will seek out a place where she can over winter. Hibernating queens may often be found in some peculiar places such as on curtains, straw thatched roofs and other situations during the winter. During this hibernation period the wings are brought down to the ventral side of the body between the last pair of legs and the abdomen. The antennae are also held down under the first pair of legs , and all the legs themselves are folded close to the body. The mandibles alone support the body by a firm grasp upon some shred of suitable anchorage.

When the warm days of spring encourage the queens into activity, these insects can be observed, during April and May , flitting along the hedge-banks and walls searching for a suitable location in which to start a new colony. Each location is surveyed for suitability. Once one has been chosen the work of nest building begins.

By means of mandibles and feet, soil is removed and carried pellet by pellet outside the entrance until a chamber is excavated. A journey is then undertaken to some near by fence or post, from whose weathered surface, woody fibre is scraped by the mandibles and carried to the nest site. here it is worked into a wasp 'paper' and secured to a point in the roof of the chamber. This process is repeated over and over until a small platform of 'paper' has been constructed. 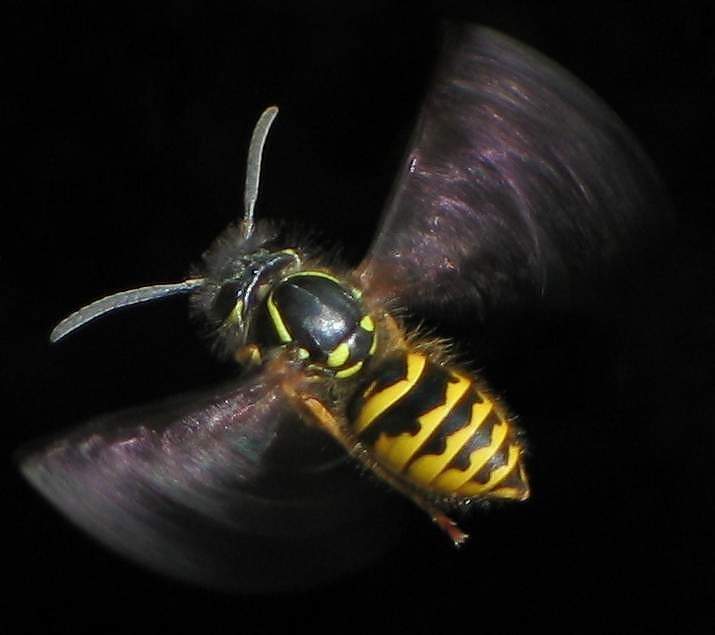 From the center of this platform the same material is then carried downwards. Some thirty hexagonal cells, all opening downwards are constructed that form the first roughly circular comb.meanwhile from the top of this vertical pillar a balloon shaped covering has been made, surrounding the comb and access to the nest is by means of a small circular hole at the bottom of the structure.

To strengthen the outer covering a second and third layer are added.these layers have narrow air spaces between them. These wrappings protect the internal combs and its contents from enemies.

The cells of a wasps nest. 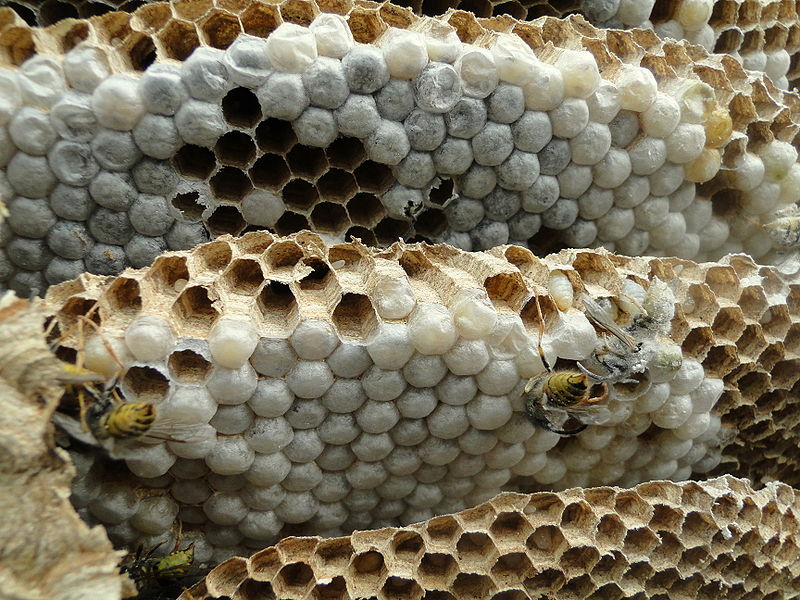 A single egg is laid in each cell of the comb.

In one of the angles of each cell the queen deposits  a single egg, securing firmly in place. After a few days, depending on the temperature the eggs hatch and a small, white, legless grub emerges. However, it does not entirely leave the egg 'shell', but hangs downwards from it, keeping the last segments of the body within its confines, thus avoiding falling head long out of its cradling cell.

As the grub grows the skin is shed twice, as the body grows and the skin becomes to tight, they throw the empty husk up against the roof of the cell. Eventually they become so large that the entire body fills the cell entirely with the head projecting downwards beyond the margin. The queen, at this point, makes the cell larger by adding fresh 'paper' to the rims.

Excluding the head, a fully grown grub has thirteen segments, it is of a white colour, fleshy and legless. It breathes through breathing holes along the body. the grub maintains a series of regular movements up and down within the cell in order to promote inward  and outward flow of the air.

The grubs have small eyes and mandibles, whose shape in the youngest grubs differ from that assumed subsequently.  The grub having reached full size, spins a silken cocoon which lines the inside of the cell and covers the open end with a white projecting dome. by casting the second skin it then becomes a pupa or chrysalis. No food is taken during this period of its life cycle, however, changes take place in the muscles and internal organs, fueled by the fat that has been stored during the larval stage.

Within a few days the perfect adult {imago} emerges, biting its way through the dome shaped end with its mandibles. For a short period of time the body is damp , the colours somewhat dull, and the wings wet and soft. within a few hours the final vigorous condition is achieved and the 'worker' is ready for duty.

The time period from the queen depositing the egg to the emergence of the fully formed worker is about a month. As soon as the first batch is reared the queen ceases the task of building cells and collecting food and devotes her time to laying eggs. from this point she never leaves the nest. The workers she has raised, take over the task of her duties.

The strength of the nest now gradually increases. The workers add further cells to the margins of the first comb until the diameter is some four or five inches. Below this and suspended from it by numerous pillars, a second similar comb is added. This process continues until as many as 10-12 combs, one below the other, is constructed, if the season is favourably hot.

At the same time additional layers are added to the external structure. Layer upon layer is added until the wrapping  is perhaps an inch {2.5cm} thick. The whole fabric of the nest is composed of wood-fibre worked into a pulp by the mandibles of the workers and moulded by the mandibles into 'wasp paper'. Evidence that wasps have taken wood from fence or posts may be be observed by way of streaked scars running parallel with the grain of the wood.

In the latter part of the summer , combs containing 'royal' cells of extra size are added below the rest. Within these cells, the young queens of the following generation are reared. At this time of the year the population is at a maximum and may consist of as many as 60,000 individuals reared in one nest during the season.

At the end of the season, as food supplies become scarce many of the grubs are devoured by the workers. Eventually the whole establishment falls prey to mice, earwigs, beetles and many other scavengers and disappears. The nest itself, from its commencement to demise lasts from April until November at the longest.

Although wasps have a much maligned reputation, and they do damage to fruit, they also do much good by destroying numerous insect pests that would do much harm to flowers and vegetables.

The hornet is our largest wasp species.

A glimpse of the common species.

The hornet Vespula crabro { pictured above}. The thorax, of this our largest species of Vespula, is reddish brown, not black. It builds its nest in hollow trees, out houses or occasionally in banks near the surface.

The German wasp is probably the second most common wasp n the UK. the face when seen from the head on view has three spots. They also have small black dots on the abdomen.

The common wasp- thorax black and yellow, face short, base of mandibles almost touching the eyes. Scape of antennae of queen and workers black. They nest deep underground.

Face of the common wasp. Note there are no dots  on the face, unlike that of the German wasp. 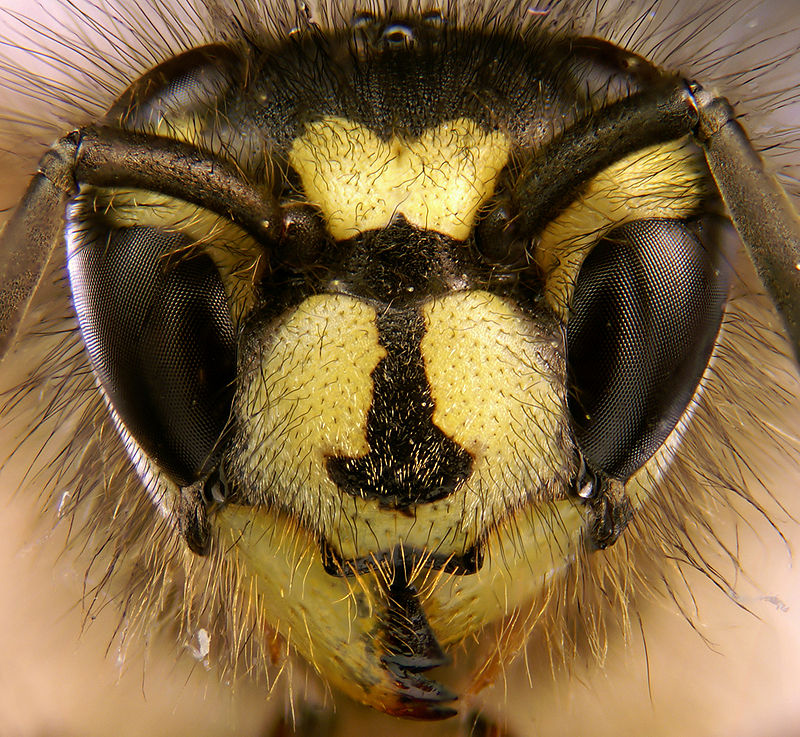