Teaching children about nature-7--wasps-{ biology of the wasp}

Wasps are perhaps the most generally feared and detested of all insects. The painful effects of their sting and the unwelcome attention they attract indoors and around picnic tables and ripe fruit in our gardens, compound our dislike of them, more so than they deserve.

All insects including wasps have a body which comprises three distinct sections-the head, the thorax and the abdomen, there being a distinct neck between the head and thorax and a waist between the thorax and abdomen. Again all insects, at any rate when full grown, possess antennae on their heads, three pairs of legs alluded to the thorax and, in the majority of species wings also. the abdomen is defined by segments {rings}. This combination of characters of the insects can distinguish them from other similar creatures as we shall see later in the text.

Spiders are not insects because their is no division {neck] between the head and thorax, it has no antennae, it has four pairs of legs { insects only have three pairs}. Its abdomen is not segmented.  The centipede is not an insect because, although it possesses a neck and antennae, it does not possess any separation at all between thorax and abdomen, and further, it has many more legs than six.

However, ants, beetles, bugs, butterflies, moths, fleas, gnats, earwigs, grasshoppers, flies, dragonflies and crickets are all insects, and in the main arrangement of their bodies and limbs resemble the wasp.

With the majority of insects the wasp is unlikely to be confused. However, some insects as for example, some beetles, flies and moths, which in their general shape and, the arrangement of yellow and black markings which adorn the body, it is well to indicate the distinctions.

Hoverflies take on the colouring of wasps and can be mistaken for them.

First the wasp has a painful sting which is absent in the above named mimics. Their is also a difference in the wings, both the front and hind wings of the wasp are thin, transparent and membranous. In beetles the front wings are hardened and opaque, serving as a cover and protection to the hind wings which are the main wings of flight, and, when at rest they are folded in a complex fashion.

Flies only possess one pair of wings, these are not folded when at rest but stand out at an angle from the body.  The clear-wing moths {those that resemble wasps }, have a dark opaque band along the apex of the wing, and the front wings are not united by hooks, also when at rest there is no folding of the wings. There are of course other structural differences between the insects mentioned but the above is able to differentiate them for our purpose.

It is probable that birds and other insects eaters {insectivores} learn by experience that wasps possess a painful sting which they do not forget. Thus the yellow and black markings keep the mimics of the wasp free from attack also.

There are two chief groups of wasps-solitary and social, which are distinguished by various structural features, and by habits and lifestyle. It is the the more familiar social wasps that are under review here, and as that name suggests they live in large communities, whose members, co-operate for the good of the colony. Their nests {see wasps -2} are constructed of wood pulp often referred to as wasp 'paper', and, are either placed underground or suspended from the branch of a tree, or in some out building, according to species.

Each nest is found by a perfect female {queen} and her offspring alone form the population which comprises of sterile females or 'workers', perfect females or queens of the following year and males or drones.

Head on view of the wasp 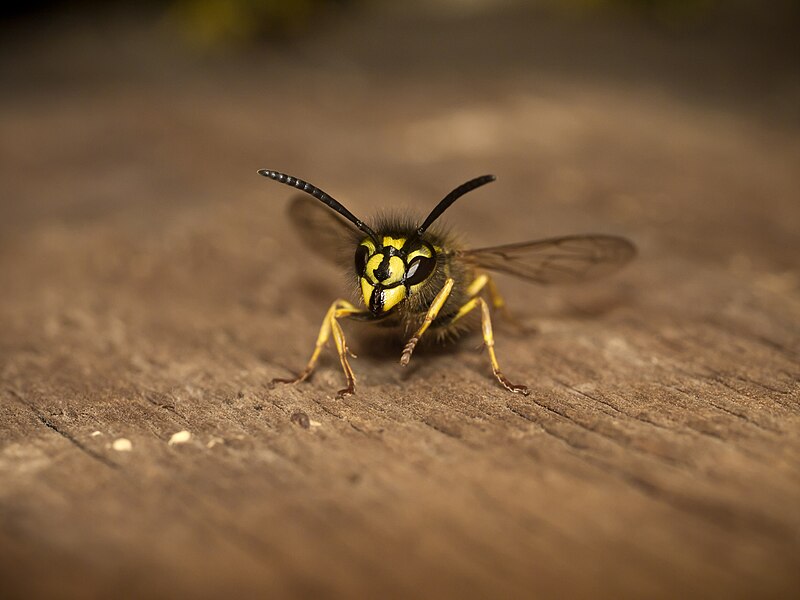 The Basic anatomy of the wasp

The head----wasps have large compound eyes which occupy a great proportion of the left and right hand sides of the head. They are bright but of a black colour  as the photograph above  shows very clearly. The margin nearest the middle of the face is deeply notched and is more or less covered by a strip of yellow, how much so is dependent on the species.

Projecting from the front of the head,  between the compound eyes are the antennae. The first joint of the antennae, nearest the head, is longer than the rest and is known as the scape. The remaining joints are set at an angle on the scape and together constitute the 'flagellum' or 'flail'.

The jaws consist of three pairs of appendages. the mandibles are the forward part of the jaws. they are yellow and are hinged on to the head a little way below the bottom of the compound eyes. each is activated by powerful muscles, which cause it to bite with a movement which is from side to side, and not up and down as is the case with our own jaws or indeed of those of any vertebrate animal.

The front of the scape is yellow in all wasps which build nests on trees, but only the males of ground wasps is yellow. the area between the eyes and below the antennae is known as the clypeus.

The mandibles are furnished with strong, hairy black teeth, which are used for cutting, scraping or tearing, and behind the upper of these and separated  from them by a groove, is a row of small ridges which act in the manner of a coarse file, which is utilised in crushing substances from which the juicy food can be extracted. Immediately behind these ridges are a number of fine hairs, which function in the manner of a filter, preventing solid matter from passing into the mouth. Since wasps possess no gizzards or other grinding implements present in the alimentary canal. thus all mastication must be accomplished before swallowing takes place. The food supplied by the workers to the grubs needs to be broken down into a pulpy condition before it is administered.

Thorax--A short slender neck unites the head to the thorax which is composed of three segments which are referred to as the pro,meso and metathorax. The first segment of the thorax is black and short and bears the first pair of legs. The middle segment is much longer and has two yellow spots, one at the attachment of the wings and one just below it on each side. Just further back from these are a further two yellow spots. The final segment which is firmly united,bear the third pair of legs and also the second pair of wings. The whole surface of the thorax is covered with bristles of some length. the wings are thin and membranous supported by a system of firmer 'veins' along the front margin of the extended fore-wing.

Legs---The three pairs of legs are all of a similar structure and only differ slightly in length. Each leg is composed of nine joints. The part nearest to the thorax is referred to as the coxa. It is short and flattened. The next joint {trochanter} is very small and allows a degree of movement similar to a ball and socket joint. this is followed by the thigh {femur} a long and rather swollen portion, standing almost horizontally, at right angles to the body. next comes the shin {tibia} which is straight and about as long as the thigh, and lastly the ankle {tarsus} composed of five joints and terminating in two curved claws.

Because of this complex arrangement, and by appropriate use of the successive joints, the foot can be moved in almost any direction. The legs move the body in the following manner, the first pair of legs pull forward, the second pair partly pulls and partly pushes and the former process at the beginning and the latter end of the 'step' is chiefly for the purpose of balancing and sustaining the body. the third pair pushes the body onwards.

The claws in which the legs terminate give a firm hold on any kind of surface.Apart from the obvious function of locomotion the legs play another important role in the well being of the insect, that of keeping the body free of particles of dust and other foreign objects. The wasp or indeed any other insect, may often be observed passing the legs over various parts of the body, then rub the legs together between two others, or, pass them between the mandibles. The legs entangle all of the particles onto the bristles that cover the tibia and especially the tarsus. Once collected they are pushed downwards to the ground.

The abdomen is composed of six visible segments in the female, but of seven in the male. The abdomen is capable of extension and compression in a telescope like manner. The abdomen tapers to a sharp point. The segments are adorned with yellow and black markings, the patterning varies between the species, and they are not constant among the other members of the same species.

THE STING---The sting consists of three long pieces, which can be thrust out from the end of the abdomen by means of a complex set of levers and muscles. The largest of these three can be darted out when the wasp is inclined to sting, it is a hollow, sharply pointed organ. Within it lies a two sided bayonet shaped ' needles' bearing six barbed hooks. These needles are the true stinging organs, although the larger outer structure is capable of piercing the skin, it serves chiefly to en-sheath, support and direct the delicate needles within, and, therefore is referred to as the 'director'.

When a sting is inflicted a hole is first made by the 'director' , the needles are then slid along inside the sheath and penetrate deep into the skin of the enemy.

Breathing----A living wasp even when completely at rest maintains a rhymic movement of the abdomen. This movement relates to respiration. Insects, unlike us, do not breathe through their mouths, but through a series of holes called stigmata or spiracles, three on each side of the abdomen and three on each side of the thorax. Through these holes the oxygen from the air is carried directly to the tissues.

In Teaching Kids Nature -{kids nature -wasps-2} we look at the life style and home of these fascinating creatures.

Sting of the wasp 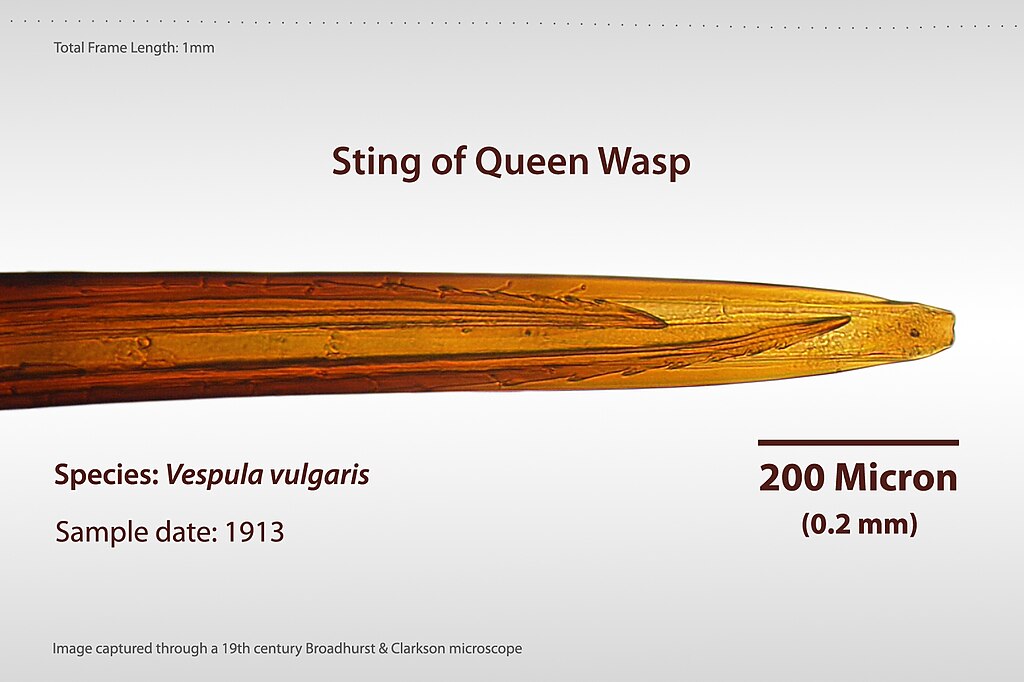