In this second article of the series 'A Look At The Characteristics Of Some Common British Birds' { Many of which occur in other countries}, we review the beaks of birds, their food and how they procure it.

In the birds of the seed eating tribe the sparrow is familiar enough species to use as an example, the horn encased jaws which form the beak {bill} have a common shape and are moved by strong muscles capable of crushing seeds. In the case of the hawfinch the bill muscles are even more well developed. Striated appendages are found in the mouth. two of them are placed on the lower jaw, near the gape, while the third forms a type of long cushion on the roof of the mouth. Hence larger seeds than the sparrow is capable of breaking open are broken easily by the hawfinch.

In the case of the hawks the bill has the upper jaw hooked, and is used for tearing the flesh of animals.

Hawks have the upper mandible hooked for tearing flesh

head and shoulders of Goshawk. { courtesy of the USFWS }

Ducks have an inner edge of the jaws provided with narrow plates or 'lamellae'. In the Shoveler duck these plates are very long. They act as strainers allowing water taken by the mouth to pass out while retaining the small particles of food taken in with each gulp.

The heron will also take fish { among other prey} and they have a dagger like beak. Birds such as the woodcock and snipe, which procure their food by probing in the mud, have a very long and probe like bill, but so formed that the tip of the upper jaw can be raised when buried in the mud. Being richly supplied with nerves,it further acts as an organ of touch, so that when it comes into contact with prey, as for an example an earth worm, the tip is raised, just far enough for it to grasp the worm and press it against the lower mandible when it is withdrawn. If it were not so designed it would be necessary to thrust aside the whole mass of mud opposed to the buried beak, a task too great for such a slender organ.

The spoonbill has a beak that is flattened from above downwards,in other species the bill is curved upwards or downwards as in the curlew.

Other uses of bill and feet

While the majority of species use the beak solely as an instrument for manipulating food others put the beak to further use. In the case of the parrot it is an important part of movement when the bird is not in flight, one only needs to witness a parrot climbing to confirm this. Some birds also use the feet to convey food to the mouth, once again the parrot is a good example of this type.

The feet of other species are also used as weapons of defence, one example is the pheasant which has a leg armed with formidable spurs. The claw of the inner toe is a significant size and used as a weapon of offence.

Thus, nature's economy, can once again be witnessed at work. The various organs of the body reflecting the uses to which they are put. Increasing as the need requires or decreasing when the need is less.

In most birds that inhabit water the toes are joined together by a web, but this is b y no means essential to swimming or diving. The moorhen {water hen} which has long slender toes which are not webbed, indeed they are more like the foot of a hen, yet they are excellent swimmers and divers

In the grebes and coots which are excellent divers the toes are furnished with broad lobes. The kingfisher, which use their feet for grasping branches when perched, have three toes are closely bound together throughout the greater part of their length.

In the climbing birds such as the woodpecker and parrot the toes are yoked together in pairs, two behind and two in front, this arrangement is known as being zygodactyle.

The Kingfisher has small feet but relatively long beak 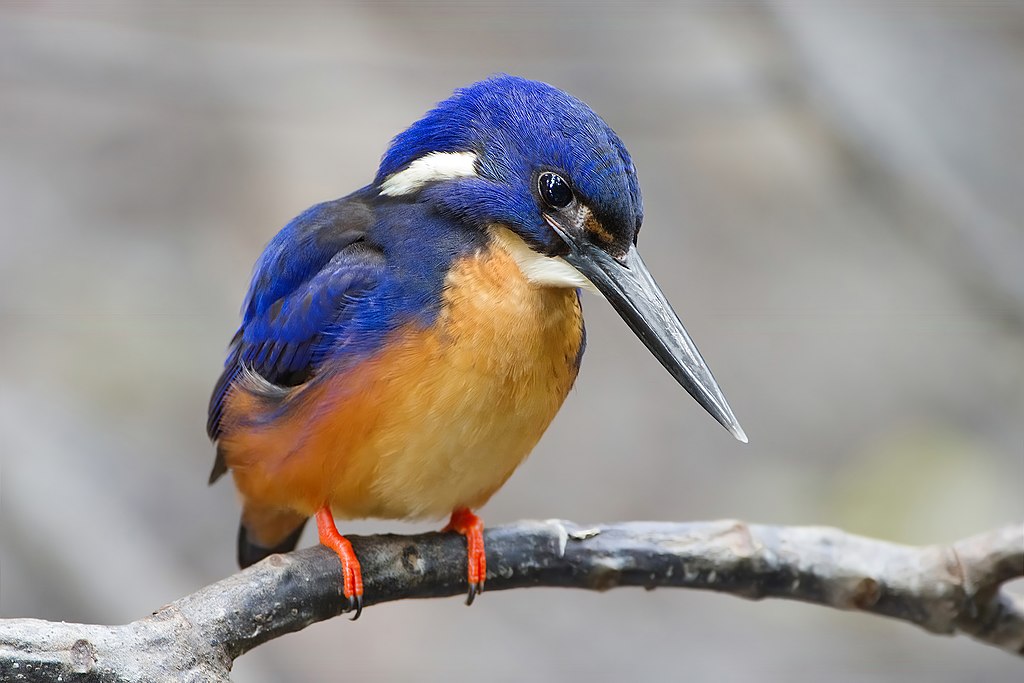 The relevant author must be attributed along with any accompanying license.

Some birds contrive to hold their food in the mouth, immediately beneath the tongue, the skin forming the floor of the mouth which in turn forms a pouch where food can be stored while the bird takes food either to their young or to a hiding place for future use. Many of the crow family, as for an example the jay, and the swift have such pouches. The pelican has a pouch so well developed that it is capable of holding large amounts of fish. These various types of beak have evolved for the requirements of each species. However, modifications accompanied them, as for example the length of the neck and legs and also the feet.

The plover tribe, for instance, the small ringed plover is encountered in sandy situations and has a short beak, neck and legs. The curlew and redshank are birds which feed on marshes and estuaries and procure their food by wading in shallow water, hence they have developed long necks and legs. In the snipe and woodcock, although the bill is long the legs are relatively short. These two species are not wading birds, however, they do use the bill as a probe.

In the eagles and hawks the bill is hooked and relatively short as are the legs, but long toes and powerful talons are capable of carrying and holding prey in a vice like grasp as they are being torn to pieces.

Nightjar, swift and swallow have extremely short beaks, however, the mouth as an extremely wide gape. These birds feed on insects while on the wing, so, a large beak is not required, the prey is snapped up and past into the mouth at once.. To help with this method of feeding the mouth of the nightjar is fringed with very strong bristles.

The woodpecker have an amazing tongue. It is cylindrical in shape and very long. It is worked by powerful muscles, attached to long and slender supports known as the tongue or hyoid bones. This tongue can be thrust far out of the mouth when feeding. When this occurs it is covered with a very sticky juice, formed by a large pair of glands placed on each side of the lower jaw.

Thus, coated it forms a most effective weapon when thrust into a mass of ants, upon which the green woodpecker feeds. It is equally effective against any tasty morsel, for there is no escape for any victim so captured.

In the next article on the subject of The characters of common British birds we review Nest and Eggs. { Children/ Nature -4}