Nearly all insects are oviporous , or produce young by way of eggs. In form and colour, character and beauty of design the eggs of insects are more surprisingly varied than those produced by birds.

The eggs and butterflies and moths present many varying tints of colour, the principal ones being yellow,white, grey and light brown. In some eggs the yellow white and grey are beautifully blended. To see this combination the young naturalist is advised to use a good hand lens or magnifying glass. The eggs illustrated in plate one below are single eggs magnified to illustrate the shape and colour. eggs of insects are generally laid in batches so that they may be seen with the human eye.  Below the eggs that feature on that plate will be referred to individually. 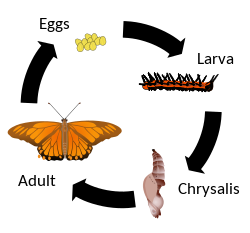 The eggs of the Magpie moth { figure one top left} are very delicate and silvery in tone and the membrane is so translucent that the young larvae can be seen moving within.

The eggs of Aspilates gilvaria the Straw Belle moth {figure two top center} are also delicately tinted. It is somewhat narrow in shape, with sides slightly flattened or rounded off and they are regularly serrated.

The moth Fissipuncta ypsillon the Dingy shears is also known by many other synonyms such as Enargia ypsillon lays an egg that is small and sub concical{ figure 3 center second row}.It has a flattened base which is firmly attached to a piece of bark or a leaf. the egg has a net like covering and the ribs are slightly raised from the membrane and connected to each other by cross-bars. these run from a marginal ring in regular order to the base, and a series of lines radiates from the central spot to the border.

The egg of the swallow prominent Pheosia tremula  is almost globular  but slightly flattened on the top and bottom, and with the exception of one spot, the surface is a continued series of irregular indentations. The colour is a very delicate pink

The eggs of the September Thorn moth Ennomos erosaria { figure two second row left} is of an elongated square shape, one end of which is slightly tapered off, while the other is flattened. the empty shell gives a play of colours while those containing larvae appear as a brownish yellow colour.

The Buff Tiger Moth lays an exquisite  little globular egg { Figure seven center of third row}, the external membrane {skin} is covered by a fine network of irregular hexagons. It appears like a tiny glass globe and the young larva may be seen inside {especially with a hand lens}.

The eggs of the Mottled umber Eramis difoliaria  { figure eight left hand side} is also very beautiful. It is ovoid, with regular hexagonal markings, each corner being studded with a raised button. The colours are very delicate..

The Small silver lines moth lays eggs that are yellow brown, in the form of a truncated pyramid {center of page}. A series of raised ribs are set in regular order around the sides, and the crossbars, which connect them, presenting a basket like patterning. The egg is flattened at the base, apparently for the purpose of securing it to a leaf.

Cerula vinula or the Puss moth lays a large round shaped egg {Figure ten right hand side of page third up}, which under the microscope has the appearance  of a fine ripe orange. The surface of the egg is finely reticulated, or rather has the appearance of a piece of netting stretched tightly over it. The colour is deep orange.

The Silkworm  moth {Figure 11 a+b Bottom right} produces eggs when first laid are a delicate yellow colour. This colour is retained for a long time , it then changes to a reddish colour and just before the larva leaves the egg it turns a slate grey colour. However, when the larva has left the egg the 'shell' regains its original yellow colour.

Eupproctis chrysorrhoea the brown tail moth produces a small round egg {figure 12 2nd row up two from the left}, which is sharply flattened top and bottom and covered by imbricated scales. This moth appears to cover her eggs with fine hairs. Pieris brassica or large cabbage white lays an egg which in shape resembles a basket used in lobster fishing { figure 13 -2nd row up center. It is conical and the lid forms the base. The eggs are of a primrose yellow colour and placed on the underside of leaves {in batches}.

Meadow brown butterflies lays a sub-conical egg {figure 14 a+b  -2nd row -right-hand side} considerably flattened towards the apex. The raised ribs, which stand away from the sides, have a silvery colour and give the egg a corrugated appearance.

The Brown hairstreak , produces a perfectly white sub-conical egg.{ figure 15 bottom center}  At first sight it might be compared with a tiny ivory ball. It is covered by a series of deep indulations or pits, with regular projecting spines.

Figure 17 bottom left, id the egg of an honeybee.

The eggs of most insects are very small and a microscope is the best way of seeing them in detail. However, in general they are laid in batches, most of which can be seen with the human eye, however, even in such cases a hand lens is of great service to the young naturalist.