The mining industry is well represented by a diverse range of insects species. Some are crude in their work while others are very specialized. Some insects are miners from birth, others only take up the craft  on reaching adulthood, and then they do so not only for their own existence, but solely for the purpose of providing for their young, which in many cases they do not even see.

Those that like to study insects or are aspiring to be entomologists would be interested in the sight of the little bees of the genus Andrena, busy sinking their vertical mine shafts into a path that has been made uniformly firm and level , it being trodden by innumerable feet.

Try with your fingers or a small tool  to excavate in this path yourself with all your strength. I think that you will find that your best efforts can only make a sorry job of it. yet this little bee has only her slender legs and her jaws to aid her in this task. These tiny bees move the tiny stones and the hard compacted soil bit by bit. In a remarkably short period of time they sink a shaft to the depth of four inches {10 cm } or more.

These exertions are so disproportionate to the size of the insects body. Imagine if you can a man with only his finger nails and teeth digging out a cavern twenty feet deep and four or five feet wide, this would be the equal of what these bees achieve.

Andrena cineraria is a mining bee. 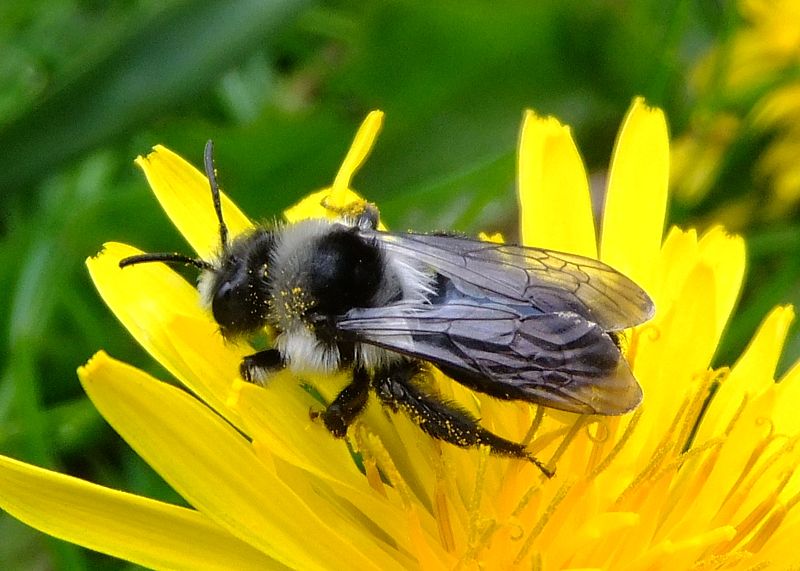 Why do they make a shaft ?

If we carefully dig around one of the these mine shafts we would find that at the end there is a round or oval chamber at the side of the shaft. In this chamber there will be placed a compact ball of pollen, on which the egg is laid. This pollen will be sufficient to feed the emerging grub until it reaches the stage when it must pupate.

During the pupal stage the grub does not feed, however, a remarkable  growth goes on unseen inside the case. The grub will gradually grow wings and other parts required to become the perfect bee.

The species of Andrena are somewhat like small honey bees in their appearance. They are as a rule very noticeable in Spring, for it it at this time they commence their mining activities. As they flit from flower to flower whilst gathering pollen, they unlikely to be noticed as people in general will easily mistake them for the honey bee.

The mines excavated vary in depth with the different species they may be from five to ten inches deep.{ 13 -26cm }. The females of the Andrena may be recognized without much difficulty, by a beautiful tuft of curled hairs on the underside of the hind legs. being an instrument for carrying pollen, it is more conspicuous in the females than the males, which also have the hairs in the same position.

However, recognizing the different species of the Genus is much more tricky and the bees require close examination. On the one hand, many species resemble each other, while on the other hand, great variety of size and colouring etc, occurs in individuals of the same species, it is a subject that would need a page of its own  to do it justice. here we look at a couple of such species.

One of the earliest Andrena species to appear is the little 'red' Andrena fulva, often referred to as the Tawny mining bee.This is an attractive little bee whose habits can be easily observed. These early arrivals have hibernated over winter. As soon as they arouse themselves from their winter sleep, they set to work to make nests for their own family.

Tunnels, often over ten inches deep { 25 cm } are made in the earth and from the main shaft numerous side galleries are excavated. In each of these galleries,before it is sealed up, she will lay an egg along with a store of pollen and honey. By the summer the eggs are hatched and the larvae are fully fed. In early autumn the the adult bees emerge from the pupae. However, they remain in their subterranean home until the first warm days of spring spurs them into activity.

Another species of mining insect is the Dasypoda hirtipes, which is a large Andrena type insect, whose body is closed with tawny hair, its black abdomen is banded with hair, and the hind legs of the female bear exceedingly long bright golden tufts, which give the insect its striking appearance.

Dasypoda tunnels into the earth to a depth of two feet { 60 cm } or so.  At the end of the shaft she constructs around six chambers, in each she places food ans an egg. The pollen which forms the larval food is carried to the nest on the legs of the mother bee. Frequently the load she carries weighs half as much as herself.

In the nest she moistens her burden with honey, forms into a pastry mass, and rolls it in to a ball. The operation is repeated with load after load, each subsequent load being added to the first, until a large sized pollen ball is acquired. Beneath this ball three 'feet' are made, of the same material in order to raise the ball off the floor. then the egg is laid on top of it.

The larvae hatch within a few days and finds itself  on top of a food mass. This food mass is 150 times bigger than its own body. It devours the food layer by layer, so that the mass maintains its shape. This continues until the whole mass is eaten. 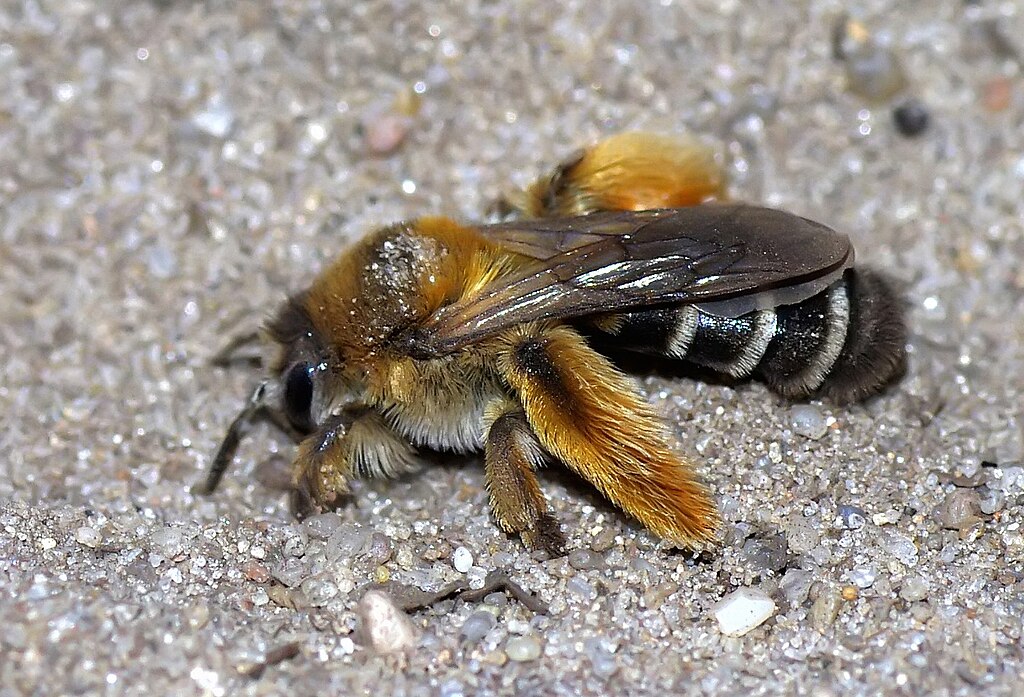 This complex life of the bees has an added complication. this is the fact that other species of bees that are parasitic feed on the larvae of the mining bees. We will look at these parasitic bees on a future page covering the subject.

The relevant author must be attributed along with any accompanying license.